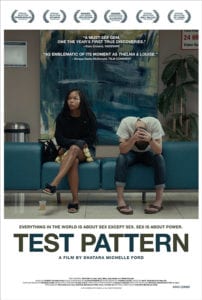 I’m not one of those people who write every day. I wish I were more disciplined, but I’m a gestater. Each of my scripts come from me daydreaming about it for weeks and putting things together. There are even moments when an entire scene will piece itself together as I’m sleeping, and then I’ll wake up the next morning, ‘I got it, I’ve got to get this out.’

… I was one of those kids that enjoyed playing make believe, playing with dolls and working stuff out. Sometimes that’s also what making a film feels like. I’m someone who processes and learns about humans more by trying to get into their shoes.

The way Brittany, Will, and I worked — especially because we were trying to avoid dialogue — I drew a pie chart of motivation. “This tiny slither here is jealousy, then you’ve got this part of the pie that’s much bigger, and that’s fear, and this tiny bit inside here is insecurity. These are all the things that inform the set of lines you’re about to say.” Then I would sit back and hear them a few times and say, “Okay, can you dial down the excitement by seven percent, up the insecurity by nine.” Again, it’s the idea that human beings are complicated and our behaviour is informed by much more than one driving factor. I’m constantly trying to analyse all of this.

There’s something about the sound of string music that’s unsettling. One thinks back to composer Bernard Herrmann’s use of strings to accompany the shower scene in Hitchcock’s Psycho (1960). If Test Pattern is a horror film, it’s more in line with films such as Ted Kotcheff’s Wake in Fright (1971), which is about the horror of being human — not the supernatural.

I say this all the time, I feel like existing as a black woman in America is its own horror story. My God, the last 12months [under the Trump administration].

Again, one of the reasons why I like Hitchcock’s work is that every woman in his movies is fucking terrified all of the time. The movie will always break down to something awful, but it doesn’t start that way. … It’s very real, and women are always in danger, black people are in danger, and queer people are in danger. It’s awful. It’s like people are always after us. It sucks, and the system wasn’t designed to protect us. Quite often, it was designed to extract from us, to exploit and harm. So yeah, we live in a horror film.

I remember watching [Darren] Aronofsky’s Mother! (2017), and thinking this guy is trying so hard to make it seem terrible and scary, but you don’t even have to do all of that. It’s terrible just purely living with this man, he’s awful. I would never want to live with him.

I also think Mad Men (2007 – 2015) is scary. Just in general, women are treated horribly all of the time, so I didn’t think we needed to do much to make a horror film, but the strings do help give you that reminder that maybe you should be watching Test Pattern through that lens.

When we question the capacity of a film to change the world and we cynically dismiss its value in this regard, we’re perhaps not considering it in the correct context. Cinema can change the perspective of an individual, which creates a gradual and less dramatic change by humanising or familiarising realities. It’s a trickle effect rather than the dramatic change we might imagine.

America’s failing has been to not understand its own shadow; for example, looking to foreign extremism and ignoring a culture of domestic extremist ideology. The pursuit of democracy and equality has been an ongoing struggle, and if I’m honest, the naïve and hopeful side of me can’t get my head around why we’re constantly impeding progress.

The dissonance is exploding your brain? Yeah, me too.

Folk Punk, Rogue Folk, Anti-Folk: When Folk and Punk Music Came Together Over Three Chords and the Truth