Aisha Franz‘s Shit is Real is a surreal portrait of confusion and loneliness told through the eyes of a young woman named Selma going through an unexpected breakup. The ways in which she deals with her feelings manifest in pages populated by strange, half human, half animal creatures, humans with melting faces, and anthropomorphized fish. Just as Selma is shocked and confused at the turn her life has taken, Shit is Real exemplifies her emotional state through the bizarre and seemingly inexplicable events that follow.

As Selma is wallowing in her despair, and growing further and further apart from those closest to her—including her friend Yumi—she witnesses her neighbor’s breakup. Later she meets Anders, her neighbor’s ex, and discovers that her neighbor has left on a trip and forgotten her apartment key card. What follows is an oddly serendipitous series of events that leads to her staying in her neighbor’s apartment and going out with Anders, all in an attempt to stave off her loneliness. As her obviously doomed-to-fail plans begin to unravel, Selma disconnects further from reality.

There are many odd and mysterious moments in the story, yet as it goes on it begins to come together to create a fuller picture of Selma’s sadness. Her efforts to continue living her life as usual make her lunches with Yumi and parties with friends feel removed and empty in comparison to what she’s going through. Selma tends to escape in these moments by seeking out understanding in unlikely places. Whether she identifies with fish in a restaurant tank or her neighbor’s cat, her depression is manifested in these ultimately futile interactions. 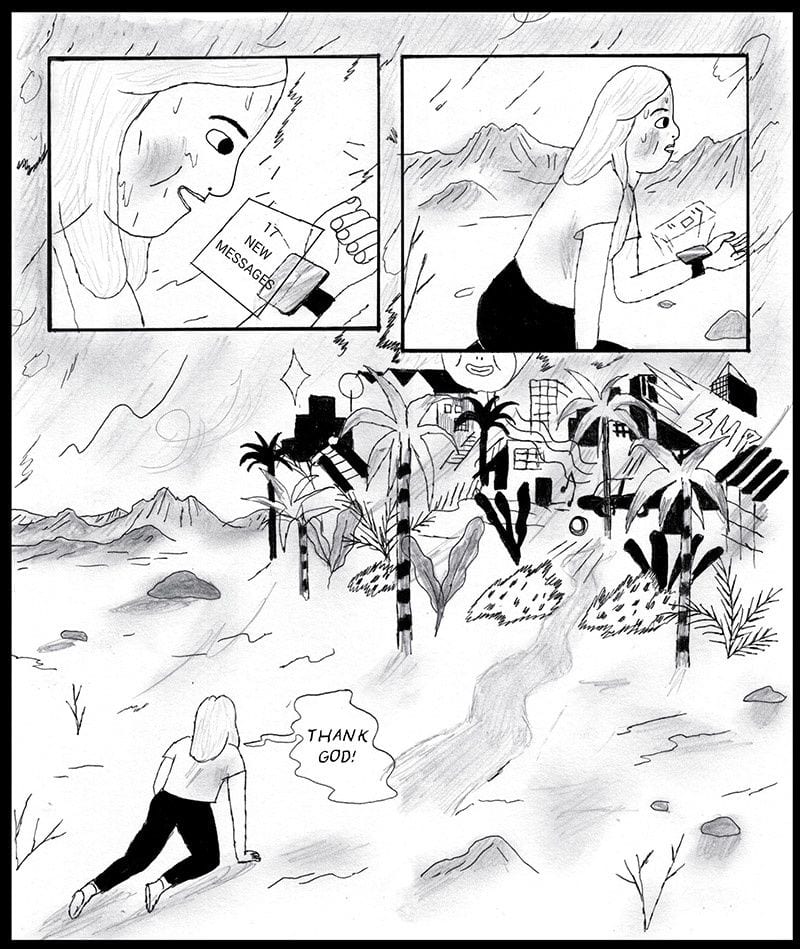 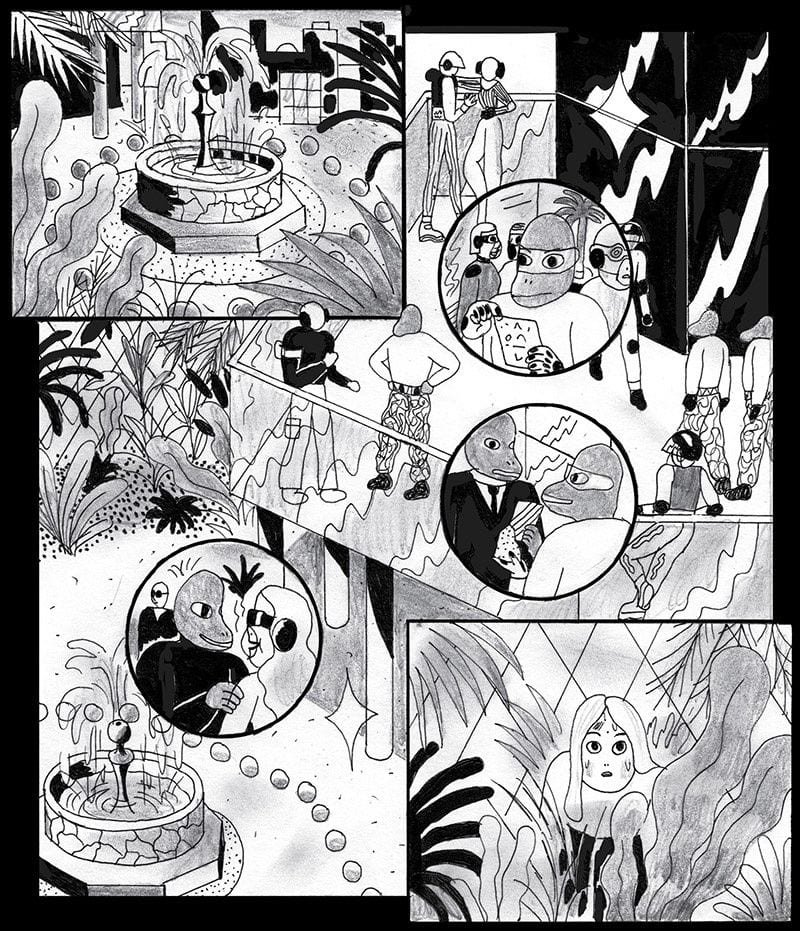 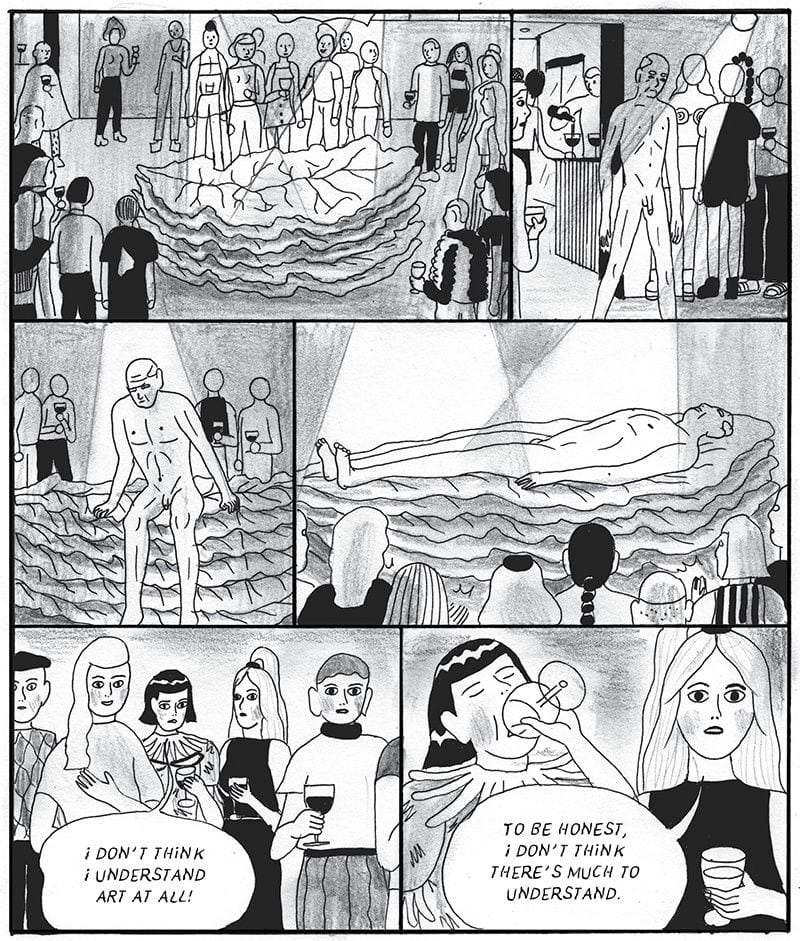 Similarly, Selma’s attempts to connect with anyone leads to a hopeless relationship with Anders. Immediately destined to fail because they’re both reeling from recent breakups, their relationship is further complicated as Selma is hiding from her current life by living at her neighbor’s. She eats her neighbor’s food, wears her clothes, and sleeps in her bed. It’s a fantasy that’s quickly quashed when she realizes who Anders is. He’s not just the nice pet owner she met on a bad night out, rather he’s another complication in her already complicated life.

As Selma continues to escape into her neighbor’s life, she finds herself drawn further away from Yumi, who moves in with her boyfriend. Yumi’s relationship is a reminder of all Selma has lost and she finds herself struggling to relate and share in her friend’s happiness. It’s only when Yumi’s relationship also falls apart that the two come together again. Yumi’s emotional state following her breakup mirrors much of what Selma experienced and her attempts to cope, though we’re not privy to her mindset, are just as disastrous.

In a way, Selma and Yumi’s relationship stands at the center of Shit is Real. Though there are large portions where they don’t interact or the reader is mostly in Selma’s head, when the two are reconnecting, Selma’s empathy and Yumi’s apology for not supporting Selma enough through such a difficult time bring them both to a healthier place. There are some lovely moments, made more affecting by the contrast to the surreal portions preceding them, that show Selma supporting Yumi in ways that are clear she would’ve benefited from herself. Franz’s ability to bridge the unbelievable with the universal is ultimately what makes Selma’s journey so meaningful.

Franz is wonderful at creating a world that’s as informed, if not more so, by Selma’s inner life as the futuristic, alternate reality she lives in. The strangeness gradually becomes normal and Selma’s mindset, clearer and clearer. For all of the surreal qualities inherent to the story, Shit is Real also maintains a relatability that makes all the oddball situations resonate. It’s a difficult task to accomplish, but Selma’s emotional life is just as moving, and poignant, and cringeworthy in this bizarre reality as it would be in a straightforward narrative. Shit is Real doesn’t shy away from the messiness of depression and isolation, and in telling a story filled with weird creatures and dreamlike sequences, it’s able to connect in different ways that speak to Selma’s naturally disconnected feelings at such a difficult time.