Currently, New York City is being infested by luxury real estate and commercial property, which is turning a once vibrant and diverse city into a gigantic gated community. On the streets, evidence of individuality survives through traveling posses, which stake their claims on bike lanes, street corners, and parks. Crystal Moselle‘s narrative feature Skate Kitchen (premiered at BAMCinemaFest 2018) is a paean to one of these crews: an all-girl skateboard gang.

The vessel into this world is Camille (Rachelle Vinberg), a painfully shy 18-year-old skateboarder dwelling on the Long Island-Queens border. Her divorcee mom (Elizabeth Rodriguez) is deeply traditional, worried only that her daughter’s skateboarding may interfere with her marital prospects. Eventually, “Skate Kitchen”, a Lower East Side park populated by a team of all-girl skateboarders, lures Camille out of the house and into Manhattan.

All to say, the plot is rather predictable. However, Moselle deliberately forsakes a more developed story for an impressionistic presentation of city skateboarding as a gritty, tribal ritual where women roar as loudly as men and where wayward souls aimlessly try to forge distinct personalities through loud dress, comic vulgarity, and the crisp imitation of spins and jumps.

Technically, the skateboarders do not perform X-Game caliber moves. But Moselle isn’t interested in aerial supremacy. She keeps her camera low to the ground, and close to her subjects’ faces, depicting a poetic intersect between boarding and the city streets. In a car, New York City’s traffic congestion and endless regulations are vexatious. To glide freely over the city’s streets on a skateboard, however, is an ethereal journey accentuated by palatial walls.

Initially, Skate Kitchen‘s story is poignant when Camille is traveling to and fro’ Manhattan in secret from her mother. Camille can only skate with her posse for so long, and hardly has the money to afford a meal, let alone an expensive roundtrip pass on the Long Island Railroad. Much of Camille’s journey is looking through a train window at the abandoned industrial regions which bridge her actual circumstances to an idealized version of herself calling from an unaffordable city.

But Camille’s socioeconomic struggle to forge her identity gets muddled by obvious plot-driven, melodramatic devices. While her mom’s discovery of her skater subterfuge predictably leads up to a runaway from home scene, Camille soon finds free room and board with a friend. Camille then quickly latches onto another coming-of-age safety blanket, Devon (Jaden Smith), a gentle amateur photographer hanging with a rival skate crew.

Smith plays Devon quietly, with an interesting blend of artistic curiosity and barely repressed melancholy. Notably, Devon may have been an interesting source of character development as a sensitive, introspective young man struggling in a world where callous machismo reigns. Instead, Devon is overly limited as a big brother type, quietly casting a protective eye over Camille.

It’s intriguing what Skate Kitchen could have been if Camille was rudderless, without a solid buddy, or a over protective mother as clear sign posts. The more interesting characters are the ones who appear to be far away from home, living in the ramshackle apartments, with no aim and at risk of a downward spiral. Later in the film, Camille stays in a warren with Devon’s skate posse. Not unlike Camille’s all-girl crew, they live to look good on Instagram. But behind an Android screen rich with Instagram likes is an impoverished youth with no direction, living in filthy conditions, addicted to a selfie culture.

What will become of those Instagram stars once they realize that “likes” don’t buy food? By sticking with the level-headed Camille, Skate Kitchen keeps a safe distance from that question. But part of truly compelling urban cinema is not just atmospheric grit, but an inquisitive grittiness to look into this issue. Here, Skate Kitchen could have jumped a little higher. 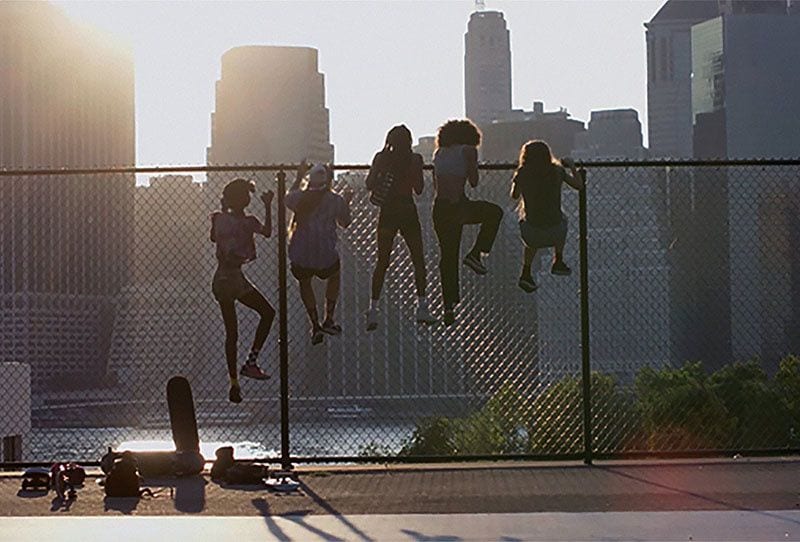