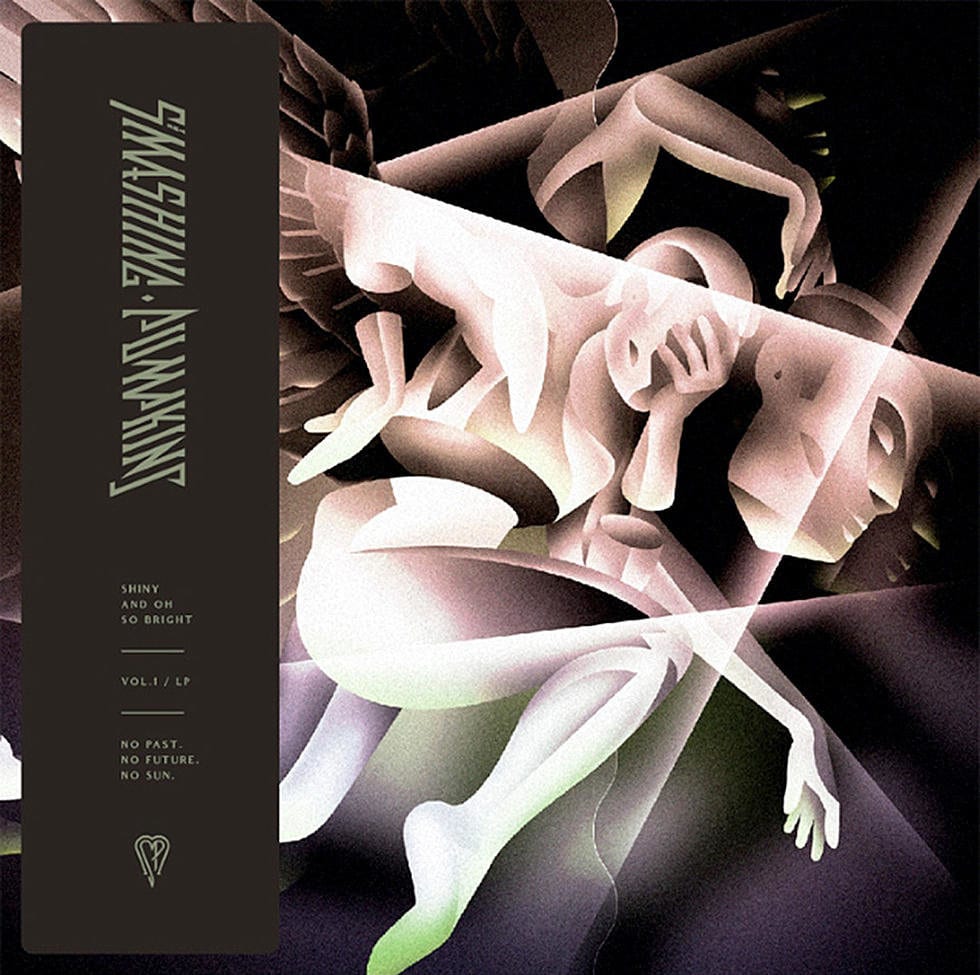 Shiny and Oh So Bright, Vol. 1 / LP: No Past. No Future. No Sun.
The Smashing Pumpkins
Napalm

Shiny and Oh So Bright, Vol. 1 / LP: No Past. No Future. No Sun. arrives with the distinction as the first Smashing Pumpkins album since 2000 to reunite original band members Billy Corgan, James Iha, and Jimmy Chamberlin. Missing is original bass player D’arcy Wretzky. Though in the run-up to this album and the recent Shiny and Oh So Bright Tour, there appeared some hope that she too might have been welcome to rejoin the band.

Despite the collaborative, even convivial, atmosphere created by getting the band back together, the first impression the album makes is a distinctly solitary one. Opening song “Knights of Malta” begins with Corgan wordlessly intoning the tune of a soul song, which is soon revealed as a way of introducing the lyrics of the chorus. “Knights of Malta” plays like Corgan riffing over top of Isaac Hayes’ version of “Walk on By” and building his own modern composition from it.

As unexpected as that might sound, the song is emblematic of a couple of the bandleader’s tendencies in recent years. One of these is to have his lead vocals high and upfront within the mix, a sonic detail met with no small amount of commentary/criticism in the previous era of Smashing Pumpkins albums from Zeitgeist (2007) to Monuments to an Elegy (2014). Additionally, “Knights of Malta” is an example of the kind of songwriting Corgan discussed in a 2014 interview with NME. On the subject of immediacy in music and how to deal with the short attention spans of listeners, Corgan says he found inspiration in, for example, a Beatles song he likes that begins “with the vocal… no intro… literally just comes right in on the chorus”. “Knights of Malta” is structured just that way.

Whereas the album opens with the energy of a now-classic rock singer influenced by classic records that preceded him, the second song finds that singer updating one of his own well-known songs. Hit single “1979” from double album Mellon Collie and the Infinite Sadness (1995) provides a template for “Silvery Sometimes (Ghosts)”. Corgan has cited “1979” as the song that bridged the rock ‘n’ roll version of Smashing Pumpkins with the electronic/technology-focused version of the band that emerged on Adore (1998), and perhaps it is no coincidence that the lyrics of “Silvery Sometimes (Ghosts)” concern being in the middle of things. In this case, however, the transitive state is not defined by musicality, but by mortality.

As if moving in reverse, or cycling through a renewal, “Travels” dials the album back to a new birth or a child’s perspective. The lyrics, inviting the listener to “see” a series of ordinary and extraordinary things within the world, function as they might in a book for children. Corgan has long been skilled at harnessing the wonder of youth, as in the classic 1994 music video for Siamese Dream‘s “Rocket”.

“Solara”, the first single released for this album, leans into the metallic or heavier guitar rock style that defines many of Smashing Pumpkins’ early songs, but the post-“grunge” signifiers and the angst of the lyrics (which, incidentally, tread the territory of a few ’90s rock song titles) aren’t as convincing as they were when Corgan and his band provided a welcome alternative to both the metal bands and the Seattle bands of the early 1990s. “Solara” is most effective as a showcase for virtuoso drummer Chamberlin, whose instincts are as sharp as ever.

There is a marked contrast between the past-its-prime “Solara” and the electronic styling of “Alienation”, a division that echoes the departure Smashing Pumpkins made starting with Adore. Despite Adore‘s failure to connect with mass audiences, and resultant minor place in Smashing Pumpkins’ legacy, this is the style that has remained most fruitful for a now-older band creating new songs. With “Alienation”, Smashing Pumpkins have, 20 years later, turned a blend of styles remembered as a misfire (Rob Harvilla recently assessed most of Adore as “caught somewhere between electronic and acoustic and orchestral”) into an asset.

Beyond the instrumentation and the overall sound of the album relative to the band’s past work, Shiny and Oh So Bright, Vol. 1 is, in the end, engaging with the visionary spirit of Smashing Pumpkins. The final two songs, “With Sympathy” and “Seek and You Shall Destroy”, read, respectively, as a way of stating where Corgan and the band have been, and where they’re going. In “With Sympathy”, Corgan sings “Disunion has its breaks / Disunion has its use.” “Seek and You Shall Destroy” is a type of fight song, which finds the fight worth the effort, whatever the costs. Those two songs might be the past couple decades in miniature.

So where are Smashing Pumpkins, 2018? Touring again, spotlighting the band’s first five albums, celebrating the band’s 30th anniversary, and creating new music as a (mostly) reunited act. For years, while diligently overseeing exhaustively expanded reissues of his own past work, Corgan has been critical of his contemporaries who seem content to cash in on the memory of what they once were, playing only the songs that once sold, to audiences who were once young. That “Vol. 1” in the album’s title, signals that Corgan and his band plan to continue to defy the system that would allow them to rest on their laurels. They’ve chosen the path of continued creative restlessness; embodying Corgan’s potent retort to being ridiculed by Anderson Cooper: “There are those of us who do as we like.”