Sorry to Bother You is one of those films that makes you feel icky all over in a good way. Directed by rapper-turned-filmmaker Boots Riley and set in a fantastically deranged version of his hometown of Oakland (one of the most culturally rich, woefully underrepresented cities in movies), this powder keg of a debut feature pulsates with incisive social satire and bombards the senses with wildly imaginative imagery that would devolve into chaos were it not for the weightiness of the East Bay milieu.

Cassius Green (Lakeith Stanfield, terrific) is just scraping by, living in his uncle’s garage, driving a crusty jalopy around town as he scrambles to land a steady job, even going so far as to bring a fake “employee of the month” plaque into an interview for a telemarketing job at Regalview. He gets caught in his lies by his would-be boss, Anderson (Richard Longstreet), but gets the gig anyway because he meets all prerequisites. (“You have initiative, and you can read.”) As long as Cassius keeps the company motto in mind (“Stick to the script!”) as he makes calls to potential clients, he’s assured he’ll find fast success, but sticking to the script quickly proves to be not so simple.

From the moment Cassius sits at his desk and picks up the phone, he’s floundering. Click. Click. Click. Client after client (mostly white and wealthy) hang up on him, and one, a grieving widow who clearly needs help, makes it painfully hard for him to stay in sales mode. The way Riley illustrates the supreme awkwardness of these phone interactions is with an ingenious cinematic device in which Cassius is literally dropped into the same room as his clients–whether they’re in the bathroom or getting laid in the living room, he’s forced to get all up in their business. Things seem all but hopeless until a fellow salesman (Danny Glover) offers words of wisdom that change Cassius’ life forever: “Use your white voice.” 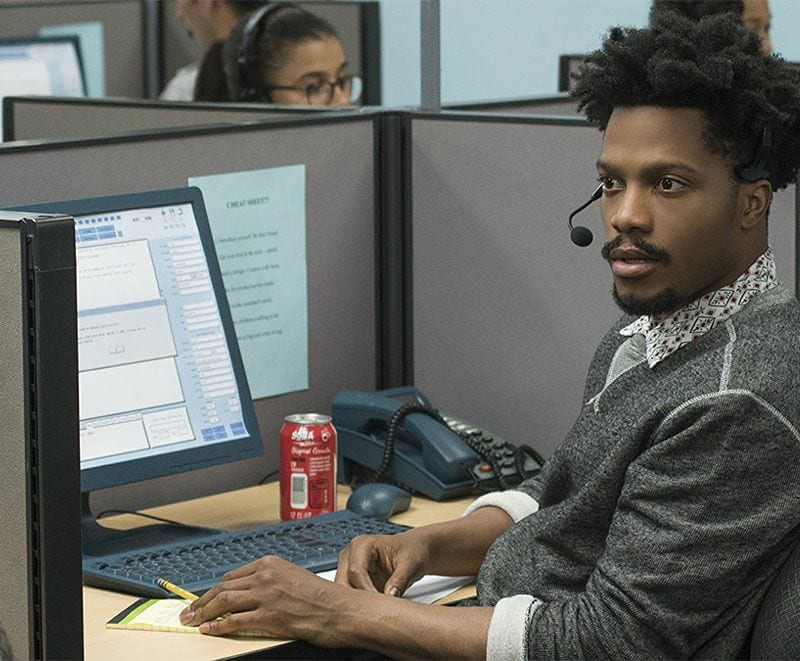 Riley again demonstrates a flair for the cinematic: when Cassius gives his “white voice” a try, the voice of none other than comedian David Cross comes out of his mouth. The dubbing is anything but perfect, but this only serves to highlight the artifice of it all, and Riley continues to zig when you think he’s going to zag, employing a wonderfully weird approach to social commentary (and filmmaking in general) that sticks to the back of your mind and won’t come unstuck for a good long while. Cassius discovers that “wearing whiteness” is his ticket to the top of the Regalview ladder, which earns him a cushy position as a “power caller” and a one-on-one meeting with uber-mogul and jerk Steve Lift (Armie Hammer), CEO of WorryFree, a corporation that, despite its totally-not-evil name, turns out to be, well, totally evil, in the most twisted, Twilight Zone-y way. 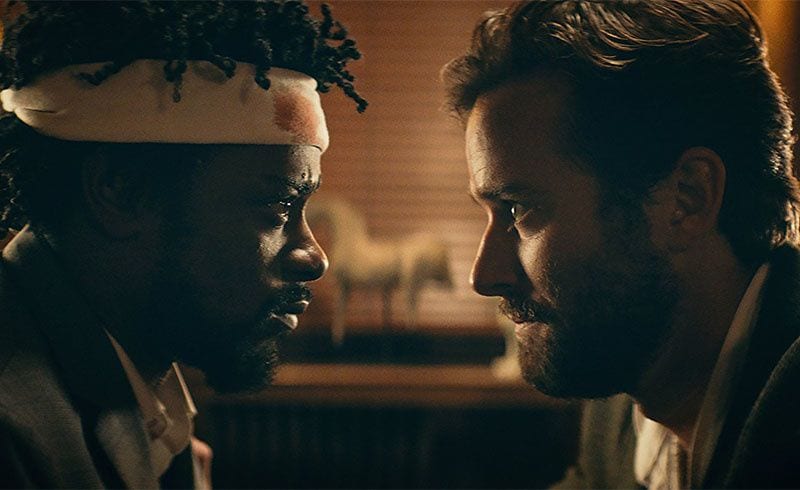 Despite his success, Cassius’ heart is being pulled in the opposite direction by his former officemates at Regalview, who have chosen to stage daily protests against their corrupt employers. To make things even more complicated, his starving artist girlfriend, Detroit (Tessa Thompson, always the coolest person in the room), happens to be one of the central voices of the burgeoning revolution. Cassius is her ride or die guy, but his reluctance to give up his esteemed position within the company is an affront to the resistance, which Detroit doesn’t take lightly.

The conflict escalates in startling ways that shouldn’t be spoiled, but rest assured, this is the most bizarre, out-there movie you’ll see in major cinemas this summer. Here’s another guarantee: Riley’s satire is as enlightening as it is frightening, as beautiful as it is grotesque, and it will change the way you view the current socio-political and pop culture climate.

An unforgettable scene sees Cassius, forced by the tyrannical, slick-talking Lift, to rap in front of a crowd of white faces at a lavish party, and what ensues is a blistering critique of the current state of hip-hop and its relationship to white America that will send goosebumps up your arm and shivers down your spine. Wedging Cassius in between two immovable forces — one representing equality, tolerance, and justice, the other embodying greed, superiority, and privileged whiteness — makes for a volatile tale steeped in allegory, existential dread, and the nightmarish consequences of class warfare. The absurdity of Riley’s world is off-putting and, at times, dreadfully uncomfortable, but the film’s fever-dream quality reflects quite accurately the tone of America’s current state of affairs.

There are a lot of heavy ideas in play throughout Sorry to Bother You, but at the same time, this film is dope as hell. Riley knows the world of hip-hop and the city of Oakland inside and out, and his entrenchment pays ungodly dividends. While his version of the town by the Bay is a surrealist one, the surrealism actually captures the vibe of the city better than any movie I’ve seen (I’m Bay Area born and bred and know Oakland well, for whatever that’s worth). From Cassius getting his drink spilled on his lap in a tightly packed “VIP” room in a questionable dive, to the menacing spotlight bouncing off of Detroit’s face and body as she subjects herself to pain and humiliation during an experimental art show, every nook and cranny of the film feels like a screaming profession of love for Oakland and its people.