Taking exams, remembering your locker combination, auditioning for the school play, repairing the critical hull breach—it turns out attending school in outer space isn’t all that different from school today. Comics artist Mickey Zacchilli draws an entertainingly familiar future in Space Academy 123, a book-length collection of her daily Instagram webcomic of the same name. Her cast includes Ashley the hyper-confident underachiever, Andrew the teary-eyed, spacesuit-wetting overachiever, Naomi the oddly self-reflective school bully, Shandy the preternaturally precocious preschooler, Donna the newly graduated principal who had really hoped to be a chiropractor, and Grandfather Computer, the emotionless mastermind secretly manipulating the Academy. They evolve together in interweaving plots of romance and intrigue that build and diverge and meander and build again, creating a pleasantly un-novel-like graphic novel experience.

Zacchilli’s style is the comic’s most unexpected and engaging quality, one that defines not only each installment but the governing principle behind the series. The pages look like very loose, first drafts, the kind of quick sketches an artist roughs out while deciding the number and positions of panels, keeping their content as basic as possible. Instead of traditional gutters, Zacchilli draws single frame lines along the panels’ inside edges, leaving outer edges open to the margins. The same, thin lines define the characters and their words and word balloons, with lighter pencil marks adding sporadic depth—or rather, indicating where naturalistic shadows could be developed since the effect is less crosshatching than stray scribbles.

Similarly, many of Zacchilli’s figures appear only partially drawn. Lines dividing shoes and legs can vanish or reappear, panel to panel. The deliberate imprecision allows basic shapes (the double ovals of most characters’ hair, for instance) to shift without seeming to indicate any change or other significance to the actual character. The roughness of the style creates some ambiguity about the identities of characters when they are first introduced—a challenge that Zacchilli counters with definingly overt character markers such as Ashley’s eyepatch, Regina’s triangular glasses, and Shandy’s hair bow. Arguably, all cartoon characters require such visual markers (Mickey Mouse’s ears, Dick Tracy’s chin), but Zacchilli pushes the norm to its barest extreme. 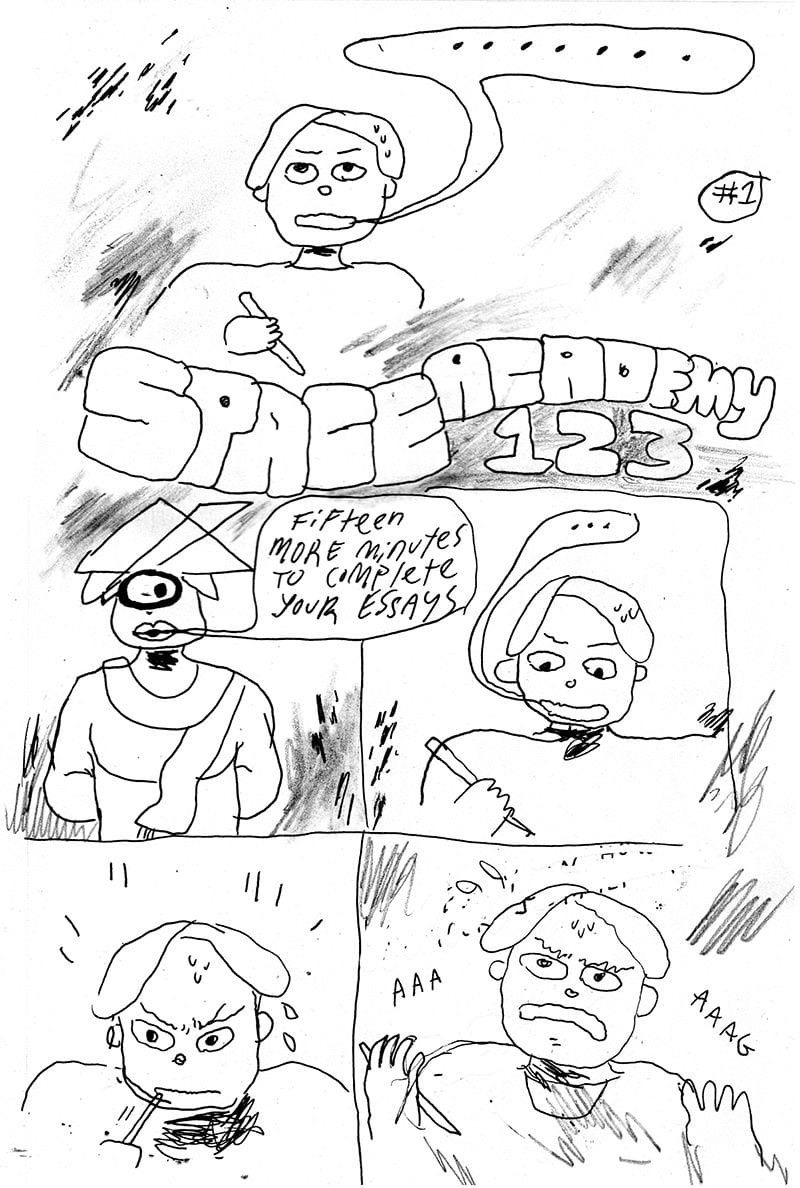 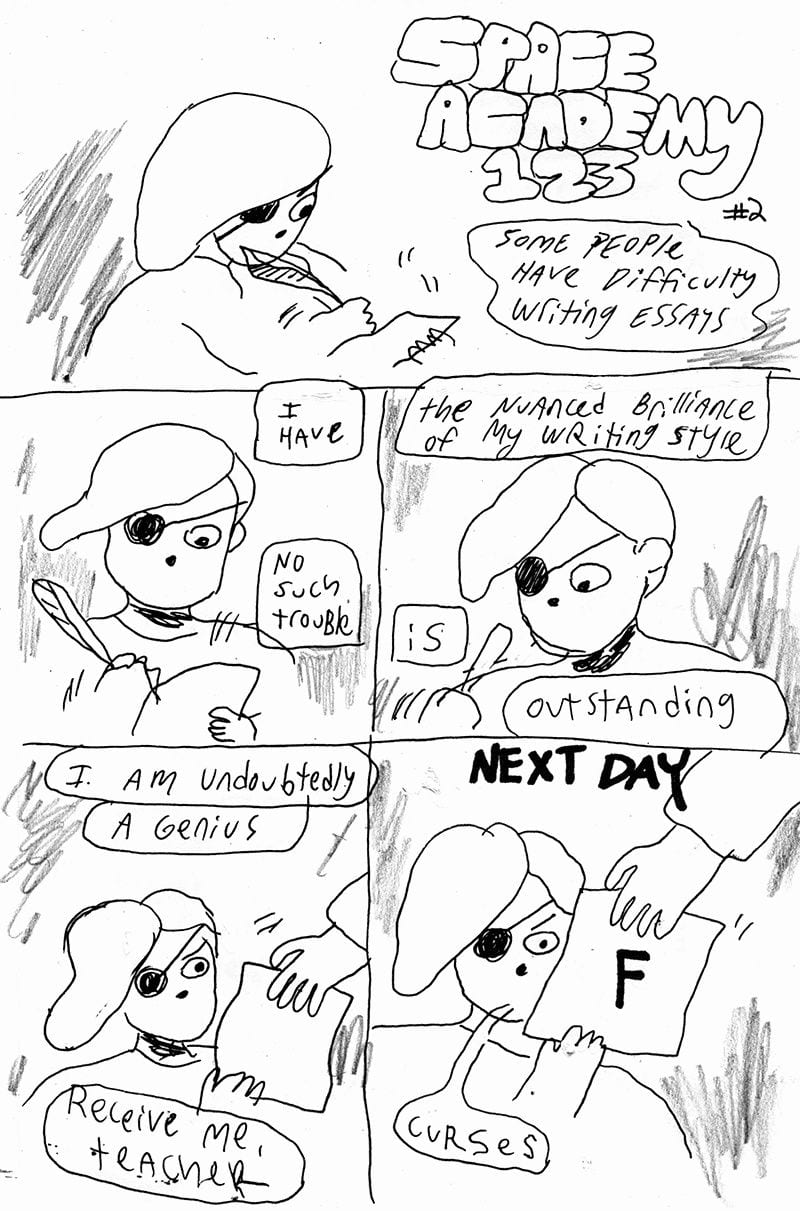 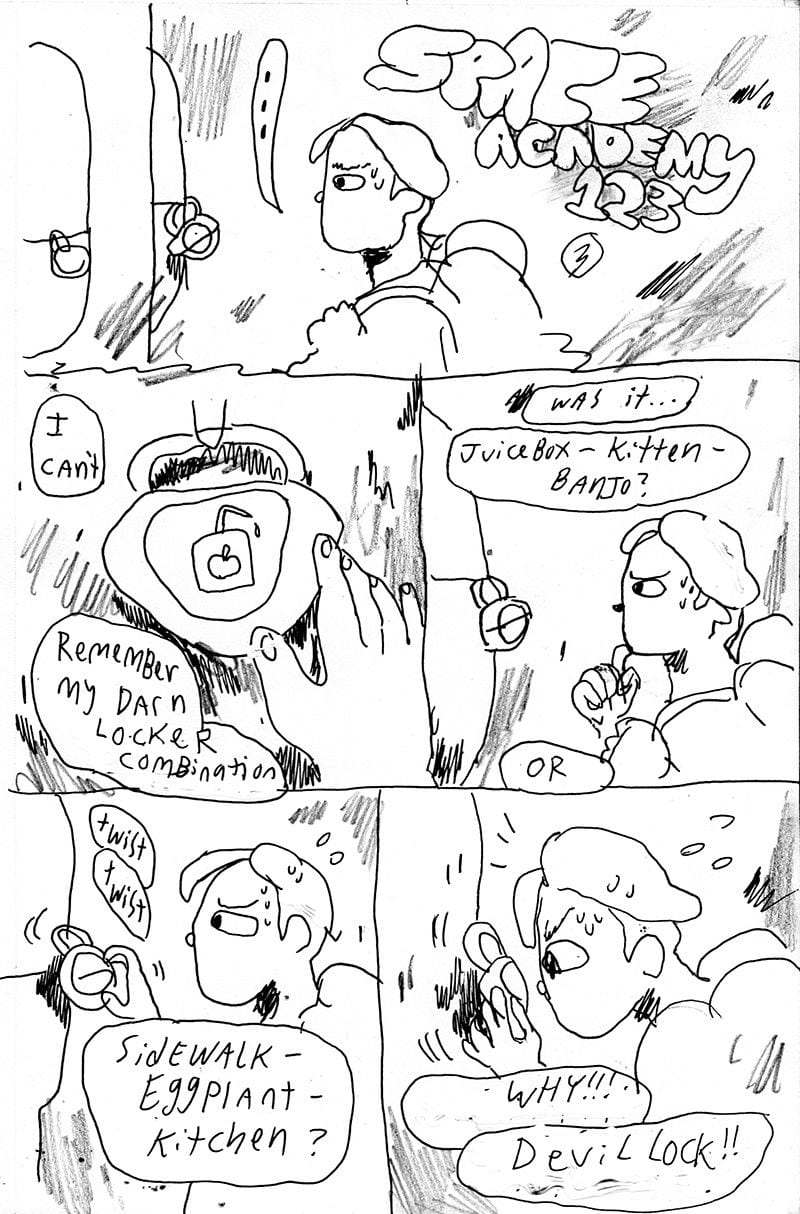 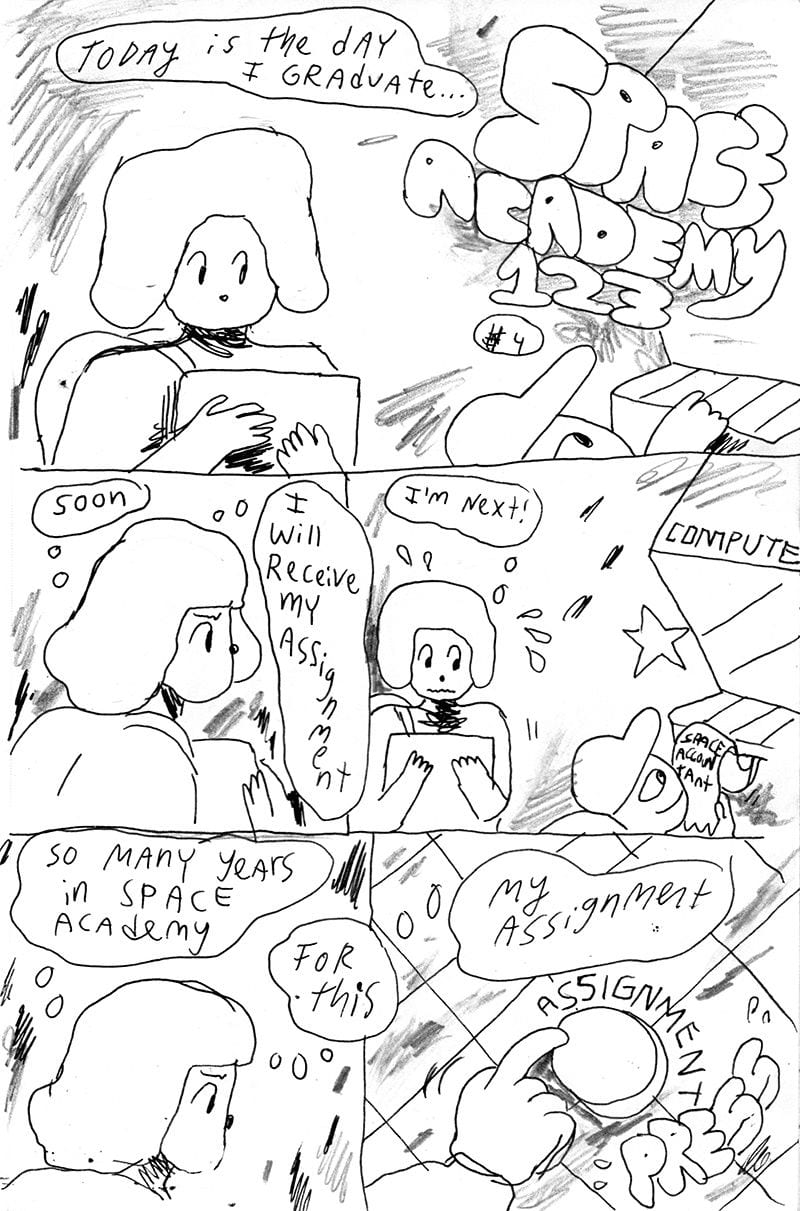 Each one-page comic also includes a title banner drawn in the top panel. Though the lettering varies, the thicker pen lines always distinguish “Space Academy 123” from the rest of the drawing. This is perhaps Zacchilli’s oddest, and so most interesting, choice. The purpose of a title design is repetition. Look at any other comic and the same, series-defining graphic is used in each installment. Zacchilli instead redraws her title in an evolving sequence of variations, each as rough as the last. Were these pages actual rough drafts, no artist would bother redrawing and therefore redesigning title letters week after week after week.

And yet in another sense, Space Academy 123 is a rough draft. Zacchilli doesn’t appear to be working from a script or even plot outline. Like the drawings themselves, the characters and storylines take loose shape directly on the daily pages. The school bully doesn’t receive a name until reintroduced in a “Character Update” some 50 pages into the series. The same update identifies “human teacher (name not yet revealed)”, but her name is never revealed, while other characters later refer to her as if “Human Teacher” were her name.

The subplots have a similar ad hoc aesthetic. While many do develop, others peter. Naomi vows early on to figure out Ashley’s “true wants” but then barely notices her again, focusing attention (and possible attraction) on Andrew instead. Late in the collection, Naomi declares a Homeric quest to find the Private Admin Jacuzzi—a goal that both Noami and Zacchilli appear to abandon without comment.

Other plot threads continue, but not always in meaningful ways. Though Grandfather Computer’s decision to move the space station seemed important at the time, no consequences follow. And why, exactly, did he manipulate the principal into going to retrieve the repositioning ore herself? Which, to be clear, was just “resources” when first introduced. More significantly the computer recognizes Shandy’s potential, declaring, “That child is VERY smart. If you don’t captivate & challenge her mind, things will go VERY wrong.” But then Shandy does go unchallenged, trapped back in Sunshine Storytime after her brief stint at hull breech repair. And though the school play was cancelled, and Andrew still hasn’t read the play Ashley wrote to replace it, why does that matter? And why introduce a “new girl” character in the second half, and then do nothing with her?

Sometimes Zacchilli writes and then scribbles out words inside her character’s word balloons, apparent evidence of her literal rewriting as she goes. She seems to follow the same revise-on-the-fly technique at the macro-level, scribbling her way through her Academy one open-ended page at a time. Though the effect makes for intentionally sloppy story structure, it’s also an effective choice for the science fiction content. Like most genre fiction, sci-fi is riddled with clichés, ones highlighted by Zacchilli’s aggressively generic title. But rather than delivering her school-in-space tropes in standard futuristic detail, her scribbled artistic and literary style undermines expectations to entertaining, if chaotic, ends.