Critically and commercially successful upon release, director Spike Lee’s third feature film nonetheless inspired an array of controversial reactions that continue to overshadow its prestige and influence still 30 years later. Set on a single city block in the Brooklyn neighborhood of Bedford–Stuyvesant during the hottest day of the summer, 1989’s Do the Right Thing is a provocative and detailed examination of racism in a diverse community encompassing Korean immigrants, Puerto Ricans, and black and Italian Americans as they try to get through their day.

The film’s ending, in which a black character is viciously murdered by police, thus inciting a devastating riot within the neighborhood, remains contentious (and sadly relevant) to this day. The ending prompted prominent white film critics to stoke fear that the film could drive black audiences to violence; other audiences found the movie irresponsible, as well as morally and ethically ambiguous, even as the film won acclaim and racked up accolades. Lee, for his part, rightfully found such responses frustrating (and, in some cases, plainly racist), and continues to say as much today.

In some respects, that combative discourse mirrors the hot-headed and high-tension interplay within the film itself. Unfortunately for Do the Right Thing, such conversation has always preceded the film’s stature as a profoundly important, wildly entertaining, intensely moving classic.

In loose terms, Do the Right Thing is the story of Mookie (Spike Lee), a young employee at a Bed–Stuy pizzeria owned and run by Sal (Danny Aiello) and his sons Pino (John Turturo) and Vito (Richard Edson). During his day delivering pizza and walking the block, Mookie interacts with a huge swath of characters (and one of modern cinema’s greatest ensemble casts), including his girlfriend Tina (Rosie Perez), his friends Buggin’ Out (Giancarlo Esposito) and Radio Raheem (Bill Nunn), radio DJ Mister Señor Love Daddy (Samuel L. Jackson), neighborhood elders Mother Sister (Ruby Dee) and Da Mayor (Ossie Davis), and many, many more. 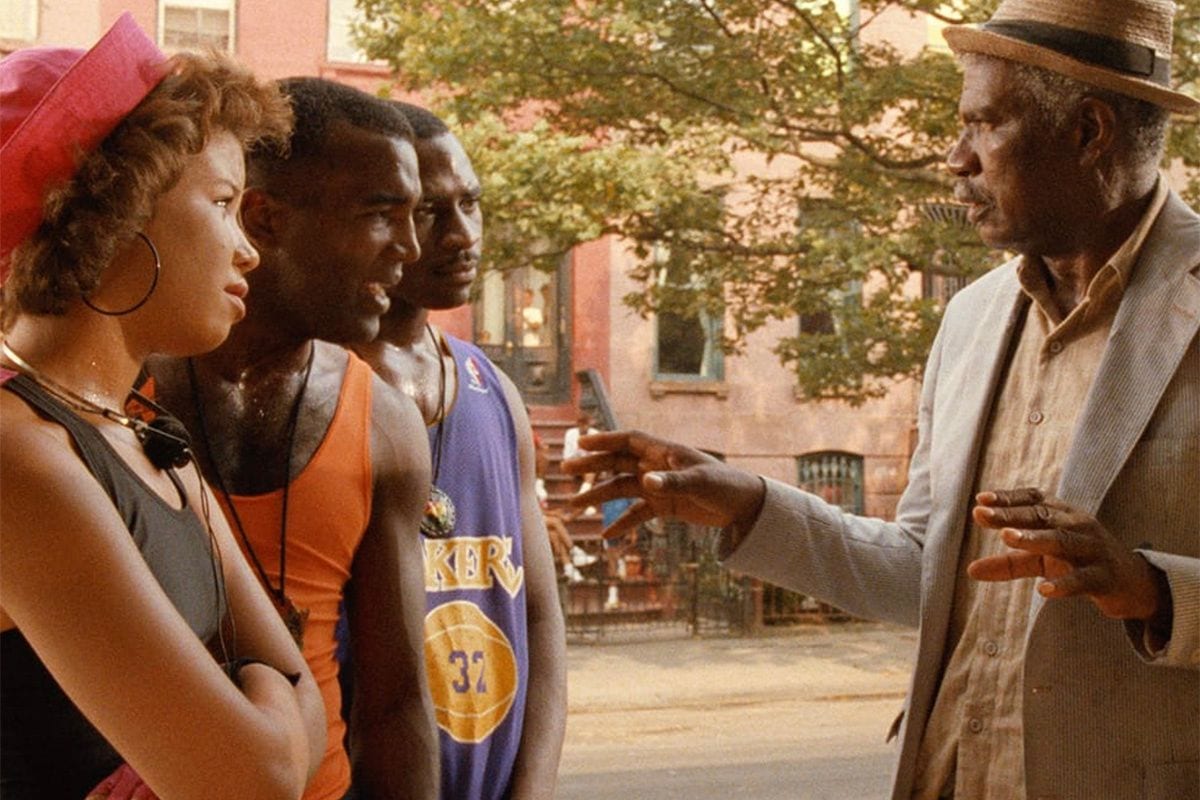 Through these characters—each with their own sense of purpose and obligation, social outlook, connections and rapports—Do the Right Thing is built on a foundation of an understanding of the neighborhood and its people. The film’s marquee conflict—Buggin’ Out and Radio Raheem stage a boycott of Sal’s Famous Pizzeria because there aren’t any pictures of black people on Sal’s “Wall of Fame”—doesn’t truly launch until the film is almost over. For the rest of its runtime, we watch these characters mingle and hang out, flirt, get ice cream, listen to the radio, open up the fire hydrant to cool off in the water, bicker, argue, and banter. We are simply witnesses to their lives among each other.

Do the Right Thing perfectly balances its socially conscious perspective with its rich, true-to-life characters and situations. The movie carries a certain degree of authenticity in this respect. It’s a detailed portrait of Brooklyn from a near-lifelong Brooklynite, as well as an examination of contemporary racism from a black auteur who would go on to make 1992’s Malcolm X and 2018’s BlacKkKlansman.

Although Lee’s voice is genuine, he deftly avoids stark realism. Do the Right Thing is stylized in a way that captures the elemental texture of a lively New York, the daunting weight of urban struggle, and the soothing uplift of human connections—all without the dry verisimilitude of social dramas similar in theme but wholly divergent in execution. Do the Right Thing is explosive and vivid in a way that life isn’t but often feels like it is. In its lighter moments, the movie is also unbelievably fun—something the discourse around it, then and now, nearly always neglects to mention.

All of this is embodied in the film’s iconic opening credit sequence, in which a front-and-center Rosie Perez—in an ever-varying gallery of outfits and makeup—dances to the film’s version of an overture, Public Enemy’s “Fight the Power”, against the backdrop of a Brooklyn city block for nearly five raucous minutes. While her character is already plenty animated, Perez’s performance in the intro is downright volatile, dynamic, and even more expressive. Switching between professional attire, a leather jacket and bright unitard, and a boxing outfit, she reflects the all the pain, anger, and release channeled in rapper Chuck D’s propulsive lyrics through movement and appearance. 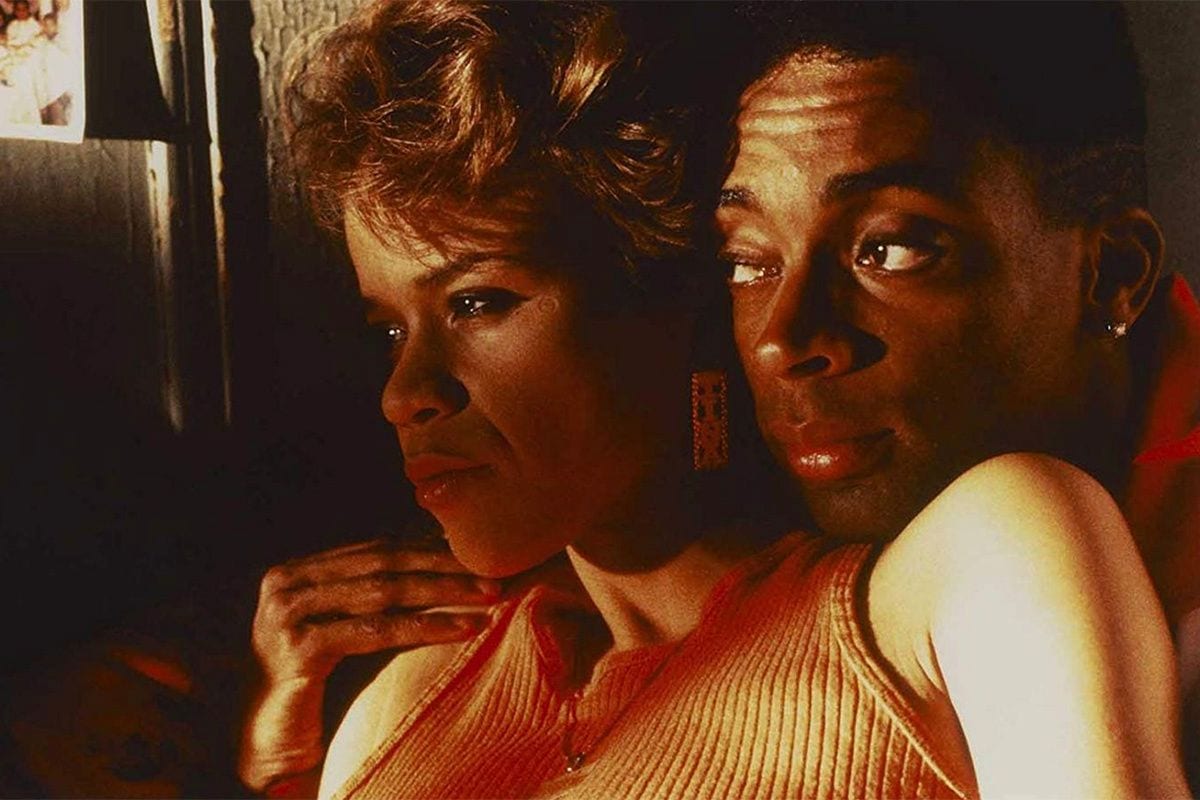 Rosie Perez as Tina and Spike Lee as as Mookie (IMDB)

Indeed, the sequence conveys the revolutionary spirit surging within the movie’s subconscious into a spectacle of emotion and performance pointing toward the tension in the heart of American society, and yet it’s also just a boisterous and captivating scene. Every move in Do the Right Thing, fun as it is, holds substantive value.

In that way, the movie stands in contrast to so many other American films about race. Do the Right Thing doesn’t caricature racial conflict, ignore inherited pain, and exploit living traumas through the kind of feel-good bromides and vacant self-righteousness that, with enough polish and marketing, dominate the box office and awards season every year. Lee’s film seeks to understand the layers of rage, resentment, and malicious apathy that contribute to racial animosity.

In a melancholic scene, Pino lets slip to Sal that his friends make fun of him for working in a black community every day. That shame, embarrassment, and self-consciousness explains, to some extent, his overtly racist and aggressive behavior toward his black neighbors. Do the Right Thing doesn’t seek to excuse that racism, of course, but it’s compelled to understand it both as a sociological and psychological issue. Racism is a society-wide problem, but its innermost motivations are often personal and abstract, stemming on some level from an individual’s pain that not even they understand. Just acknowledging and properly sourcing that pain can be the first step to healing.

Do the Right Thing doesn’t suggest that we’re on that path, however. Thirty years after its release, the police murder sequence is as agonizingly real as ever, and the institutional powers that value white property over black lives still maintain authoritative control of our private and public lives. The film isn’t optimistic about progress, and America’s continuing racial violence since its release has shown good reason for Lee’s skepticism. 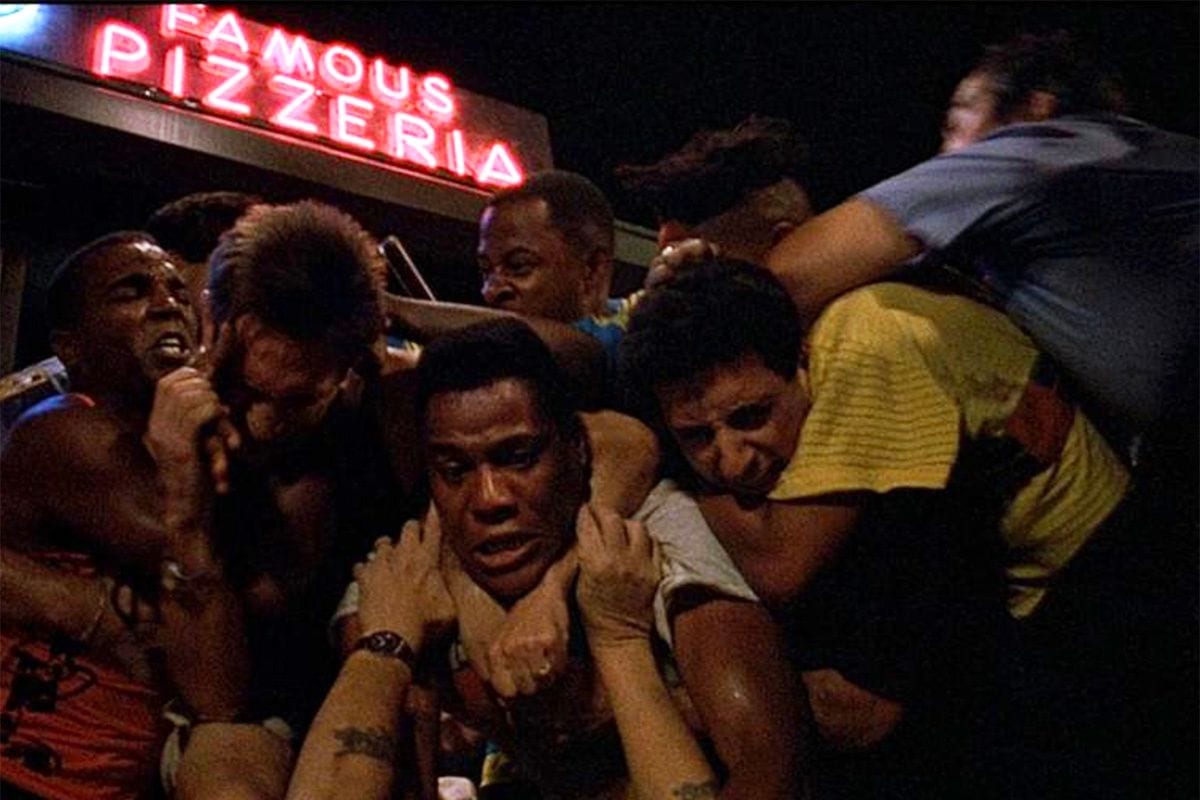 Unfortunately, these nuances are lost in so much of the conversation on Do the Right Thing. It’s a movie that needs to be seen, enjoyed, laughed and cried to, thought about, and only then discussed. It’s a shame to lose the human world on display in the film from which the social commentary emerges—the joy as well as the pain. The movie is also not just about race in America or the cycle of resentment; it’s also about community. Every confrontation, every relationship, every episode centers around seeking communal identity, and just as race can help build community, racism can fracture it.

Each of our communities—from the national level to our own city blocks—are touched by these issues, and it’s long past time to engage with them with the weight they deserve. Do the Right Thing is one of the pillars of American cinema, not just because of its status as a cultural touchstone or a landmark moment in the careers of these exceptional actors and Lee himself, but because it’s among the most profound studies in our cultural history of the dividing lines that scar the roots of American society, as well as the indestructible bonds that cross them. Like racism, this film must be engaged with directly. Three decades later, there’s still so much to learn from this community.

From its video transfer to its supplements to the art and design of the packaging, the Criterion Collection’s Do the Right Thing Blu-ray is an essential release for fans of the film, Criterion, or even home video collectors generally. Special features include several deleted and extended scenes, the film’s 1989 Cannes Festival press conference, the music video for “Fight the Power”, directed by Lee. It also includes new interviews, a making-of documentary, tons of footage from pre-production, rehearsals, and the film’s wrap party. There’s also an audio commentary with Lee, cinematographer Ernest Dickerson, production designer Wynn Thomas, and Lee’s sister, actress Joie Lee, and much more.

My favorite is the massive booklet provided with this release, which includes an essay by New Yorker critic Vinson Cunningham and an astonishing 82 pages of excerpted material from Spike Lee’s production diary. The diary offers unprecedented insights into the director’s inspirations, methodology, and decision-making process throughout the writing and pre-production of the movie. All combined, Criterion has assembled a stunning set worthy of the film’s stature.