French director Alain Resnais never cultivated a consistent approach to filmmaking. For some cinephiles this is precisely one of his most celebrated gifts: the willingness to reinvent style to suit the given subject. Devotees of Hiroshima mon amour (1959) and L’Année dernière à Marienbad (Last Year at Marienbad; 1961) may fail to recognize any surface connections with subsequent films, including the one under consideration here, Stavisky…(1974). Most of his films, however, regardless of style, exuded an intellectual rigor, a seriousness of intent, and a penetrating insight into their subject matter that gave his work an essay-like character. In watching Hiroshimaor Marienbad, one almost feels as though they are being carefully guided through a considered and perspicacious analytical foray into the unknown, an abstruse and yet crystalline argument often concerning memory, the manner in which we comprehend narrative, and the limits of our knowledge concerning other people. Resnais’s approach to direction is similar to Montaigne’s approach to the essay: sticking to concrete fact and recognizable example, the viewer/reader is transported with unexpected celerity to the far reaches of abstraction.

In this sense, there are many resonances between Resnais’s two early masterpieces and Stavisky…, particularly with respect to the conundrums of memory and knowledge of others. The film examines the final months in the life of Serge Alexandre Stavisky (Jean-Paul Belmondo)—an embezzler, theater impresario, gambler, meddler in international political affairs, money launderer, dealer in stolen jewelry, counterfeiter; in short, a fraud—culminating in his death, perhaps a suicide and perhaps a political assassination, in January 1934. The film brings together numerous flashbacks (to Stavisky’s supposed introduction to sexuality, his traumatic arrest) and flash-forwards (mostly to the inquest where many of Stavisky’s friends, persecutors, and colleagues give testimony concerning his various nefarious deeds, his putative influence on government officials, and the events leading to his demise).

Resnais emphasizes that all narrators here are unreliable; even the least attentive viewer will recognize the confabulations, the dodges, the outright lies. Some witnesses lie to mask their complicity, others out of a sense of pride (not wanting to reveal their own foolishness and inadequacy), others out of a sense of loyalty to the dead. Stavisky’s narratives may also be unreliable. He immediately contradicts the fantastic scenario of his own defloration as related by his close friend and associate, Baron Raoul (Charles Boyer). His alternate story involves the intercession of his grandfather on behalf of his developing sensuality. It seems plausible enough until you begin to contemplate the possibility that this is as much a mythical narrative as the Baron’s. The grandfather is meant, in Stavisky’s tale, to stand in utter contrast to Stavisky’s father, the Jewish dentist from the Ukraine who desperately wants to be seen as a man of honor, a reliable businessman, and even an immigrant willing to disavow his Judaism in order to assimilate more completely into the social environs of France.

Stavisky feels a close connection to his deceased father and is burdened by guilt over his suicide. In commemorating his father’s death, Stavisky visits the house where the suicide took place; earlier he roamed a cemetery while thinking of his father’s death—Stavisky even lays supine on a horizontal gravestone (it looks to be a semi-opened, unoccupied, stone casket), reminiscing over his father’s vaunted integrity, recalling his father’s insistence that if Stavisky were to bring dishonor to the family name, he would kill himself. Indeed, Stavisky’s father committed the deed shortly after Stavisky’s arrest. Stavisky lays in the cemetery seeking an absolution that he knows cannot come.

And yet it’s all a bit theatrical. Stavisky and his wife Arlette (Anny Duperey) drive out to the house where the father shot himself with the unsuspecting Baron in tow. Stavisky walks alone into the building and the Baron is left wondering if he intends to purchase the property. When Arlette disabuses him of this notion, he offers his pity, his face taking on the hue of reverent grief. Arlette assures the Baron that Stavisky wishes to be alone—we see him in front of the house, however; he is on display. Why bring the Baron along at all and why leave Arlette behind to explain? There’s another man in the car as well, the Spanish Fascist Juan Montalvo de Montalbán (Roberto Bisacco) that longs for Arlette and whom Stavisky hopes to use for yet another swindle. Stavisky’s bittersweet nostalgia trip allows Arlette a moment alone with de Montalbán in order to further their designs.

A similar qualm arises in thinking about the cemetery scene. Stavisky’s personal physician Doctor Mézy (Michael Lonsdale) follows him into the darkness, and listens to Stavisky’s lament over his father’s respectability, his narration of the time Stavisky stole gold fillings from the dentist’s office, and Stavisky’s assessment of his father’s doomed courage in the moment of suicide. This monologue then recalls the parallel monologue concerning Stavisky’s grandfather. Whereas the father was naïve but insistent on propriety, the grandfather was worldly wise with a penchant for discreet debauchery. The father longed to assimilate to a culture, rampant with antisemitism, that could only accept him on the condition that he disavow his identity; the grandfather considered all such accommodation futile and laughable. The father obsessed over how he was seen, that he was viewed as honorable, that people saw he was upright and successful; the grandfather preferred to withdraw from the direct glare of public recognition in order to enjoy the fleshly pleasures of the demi-monde. 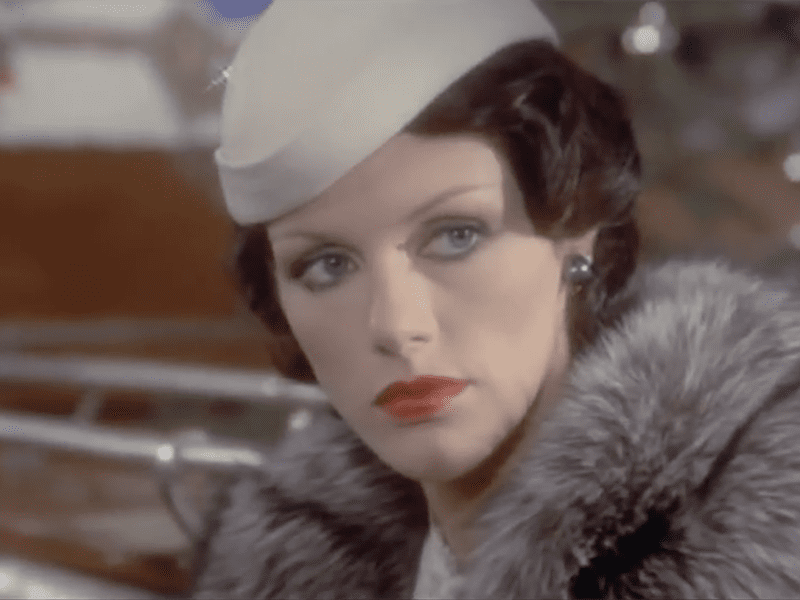 Stavisky positions himself as somewhere between these two paternal figures with regard to his personality and his view of the world. Like his father, he must be seen as powerful. Indeed, his power and influence derive almost exclusively from the perception that he is powerful and influential. Although he spends lavishly and, of course, conspicuously, he acknowledges to certain of his operatives that he’s on the brink of bankruptcy. He’s overextended and needs his current plans to appear successful in order to underwrite his credit. Stavisky is merely what he is perceived to be. Like his grandfather, Stavisky exudes a knowingness in the ways of the world. He knows what palms to grease to kill unflattering newspaper stories but he also knows how to embrace the seemingly unflattering and to transform it into the mythological, to create an air of danger and mystery around his past, romanticizing his crimes and misdeeds.

In this sense, Stavisky navigates a space between the grandfather and the father, space neither of them truly occupied. He needs to be seen as both respectable and disreputable. He has to be known as a criminal but to be so entrenched in the workings of government that he is untouchable. He advocates for worker’s rights and other noble causes and yet constantly pulls the strings of bribery and undue influence. His value utterly depends on the illusion of his value. In order to succeed he must perform success.

In all three scenes (the grandfather monologue, the suicide house, the cemetery), Stavisky is assured of witnesses and these witnesses are always those he considers his subordinates, those who rely upon him for their subsistence and their access to power. Stavisky is the conduit of that power. It’s not a coincidence that so much of the early running time of the film takes place in the theater under Stavisky’s control. He is the master actor and the stage all at once. He performs the great mysteries of his past, his motivations, and his projected designs. Belmondo’s approach to the character reinforces Stavisky’s performative nature. He wears a perpetual smirk on his face; his rare moments of anger quickly dissipate, returning him to a kind of permanently ironic façade. Every gesture is a pose, every line an utterance, every movement a self-conscious bit of blocking.

It’s impossible to know anything concrete about Stavisky. He seemingly adores his wife and yet he openly cheats on her (he brags to her about conniving a recent conquest out of some jewelry) and certainly sees her as an asset to his underworld dealings. She’s another subordinate and for her he performs love. The doctor witnesses both the grandfather monologue and the cemetery scene. As one of his most constant companions, he needs the doctor to bear witness to the extent of his ambition and the lengths to which he is willing to go to achieve that ambition. For him Stavisky performs the driven and tortured genius of deception and intrigue. The Baron, witness to the suicide house scene, is Stavisky’s greatest (and seemingly most genuine) admirer. The Baron is Stavisky’s connection to acceptability and legitimate forms of power. For the Baron Stavisky performs sincerity.

Resnais underwrites this interpretation of Stavisky’s character through both Sacha Vierny’s lush cinematography and Stephen Sondheim’s pastiche musical score. Even location shots in this film seem like elaborately built sets. Each color is a bit too much, each room too precisely decorated, each outfit too gorgeously tailored. Although ostensibly a biopic, the film appears to be a theatrical extravagance, a Technicolor fever dream that resonates with other nostalgia-driven films where the memories are too idealized to be reliable. Likewise, Sondheim’s Stravinsky-derived, slightly off-kilter renditions of foxtrots and similar orchestrated dances of the 1930s are a bit too polished. The emphasis on refinement in both the cinematography and the score belies a cloying unreality that lies at the basis of Stavisky’s existence.

One might complain that without a fairly thorough knowledge of French politics in the ’30s, the film is rather difficult to follow. If this were actually a biopic, that complaint would register more soundly. But that is not what Stavisky…represents. Like Resnais’s other films (while not seeming to be like them at all—semblance and its deceptions, after all, being the primary point of the film), Stavisky… is a treatise on the indiscernibility of other people. Behind all those gorgeous spaces, within all those stylish outfits and accouterments, behind all the legends and myths and boasts and tales of intrigue… behind all of those opulent things that seem to represent Stavisky and his influence, his power, and his mystery… behind all that lies nothing. But, Resnais whispers to us, that lack of solidity is precisely what allows for the constant movement of power, the circulation of influence. It affects not because it is something but because it’s in a seemingly permanent state of becoming. As long as it acts, power is. As soon as we try to pin it down, in the manner that the authorities and his enemies continually try to pin Stavisky down, it disappears. Stavisky is a nullity but, like power itself, he is a nullity that affects us all.

The Film Forum in New York City is screening Resnais’s Stavisky…from Wednesday 3 October through Thursday 11 October, with multiple showings each day. The cinematography of this film is stunning and rather disturbing in its brilliance. Seeing it on the big screen reveals a world of power that both demonstrates the impact cinema can have and exemplifies the kind of lesson that it can teach.