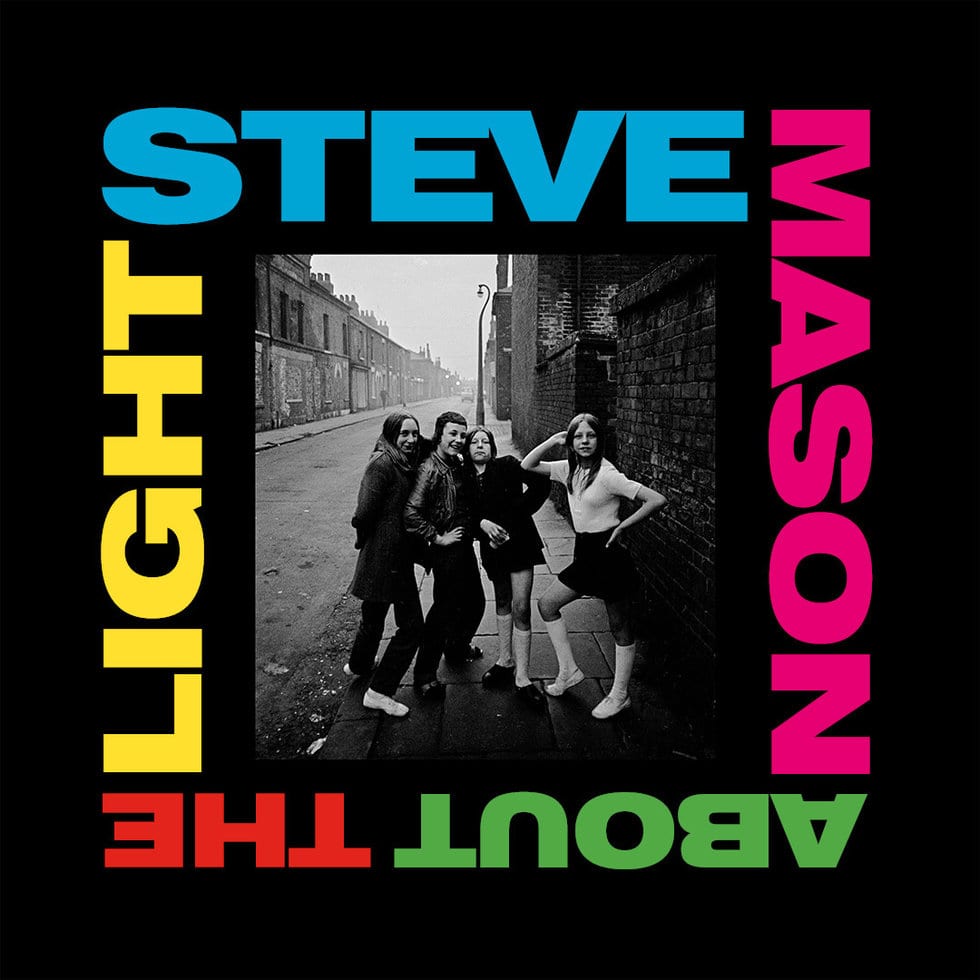 About the Light
Steve Mason
Domino

With every new album, Steve Mason steps further from the enormous shadow cast by the critically lauded, commercially stunted, wholly brilliant the Beta Band. After losing himself in the immediate aftermath of the band’s breakup in projects such as King Biscuit Time and Black Affair, Mason started a solo career that began with the introspective, electronica of 2010’s Boys Outside and which now sees him release his new album About the Light.

Mason’s previous album, 2016’s Meet the Humans was met with widespread acclaim from fans and critics alike. Almost acting like the antidote to the trippy, genre-straddling Monkey’s Mind in the Devil’s Time, the album featured 11, concise songs full of bright, breezy choruses and uplifting hooks. For the first time in his career there was a perception that Mason was finally finding greater joy in his art and, as such, Meet the Humans felt like his most succinct and fully realized artistic statement as a solo artist. However, when asked as to whether it achieved all that he had set out to do at the time, Mason has surprisingly mixed feelings.

“It did, and it didn’t,” Mason answers, in his familiar, warm Scottish accent. “I think personally speaking whenever I put an album out in my head I always think that humans are going to stop what they’re doing all over the world and listen to it and it’ll change their lives for the better and the next day everything will just be great for everyone in the world and it’ll be number one for the rest of recorded history. That’s what I imagine happening, so inevitably I always fall short of that. I am always slightly disappointed that more doesn’t happen but that’s not a bad thing, I don’t think, because that’s what’s constantly driving you forward to keep going.”

Given the positive critical reception to the album, fans may be a little surprised by this, but his view is indicative of a man who has spent the majority of his career actively avoiding repeating himself. “I guess it did everything that I wanted it to do, but there were certain tracks on that that I thought were a little bit “Steve Mason by numbers”. It wasn’t every track, I thought the singles off it were really good, especially “Planet Sizes” which is a great track, but there were just a couple.”

Despite, Mason’s jovial, often tongue in cheek demeanor, he is clearly an artist who strives to reach as close to perfection as he can. This dissatisfaction with some aspects of Meet the Humans patently ignited a fire in his belly and spurred him on to do one thing – make a better album. “Once I’d sort of recognized that I sort of thought ‘OK, you’re getting a bit lazy here.’ So I really had to make sure that what was written next was me trying to push myself a little bit more and keep pushing forward. I mean everything is just such a massive learning curve. You always want to be pushing forward and when it’s your record. You probably more often focus on the bad points that you weren’t happy with in order to push forward again.”

To avoid the pitfalls of sounding a little bit too much, as he describes it, “Steve Mason by numbers” he did something that he nor the listener might expect, he embraced the obvious. “A lot of the time I’ve got rid of things because I’ve thought “Oh they’re too obvious” and when you’re trying to write a more pop record which is what I wanted to do, pop is all about the obvious, but it’s also about making the obvious seem new. Make something that you’ve heard probably a million times before but make it sound new but I wanted to stick to something a bit more obvious. Sometimes, when you’re taking a break in the studio and someone’s messing around, and you’ll have a laugh, and you’ll think well we can’t use that because it’s too obvious. And you think “but why can’t we use it?” You’re really enjoying playing it, and it sounds fucking brilliant, so use it.”

The result is the brilliant About the Light. An album that sounds richer, more colorful and bolder than anything he has done before. Full of pop hooks and soulful melodies that quickly burrow deep down into your brain, it’s a strikingly confident record which benefits greatly from Mason working with a full live band on the writing of the songs, something he hasn’t done since the days of the Beta Band. It was a decision that Mason felt right at this point in his career. “I was just bored of working on my own, and I think I felt more confident that I could involve other people. I think I’d reached a point where I’d banished any insecurities I might have had of myself outside of the Beta Band.”

The players that Mason has assembled for About the Light and the band dynamic suited Mason and his way of working. “It’s a strong band. I generally know what I want, and I certainly know what I don’t want. It’s one of those things where they can’t have an ego. You have to leave at the door and that if you put an idea forward and I don’t like it or want to do it, then you’re now offended. They’re really good at it. They know that I want it to represent me. Often when you’re in that situation when someone comes up with an idea, and you say ‘Nah, I don’t like that.’ The onus is on you to come up with something better. So it’s that that pushes me forward, certainly.”

Working with a band also meant that Mason could relax a little more and enjoy the alchemy of creation. “I find it (making a record) very intense anyway, but this record was less intense because me and my band had done so much work before we even got to the studio. I mean we played through every song, we’d arranged them properly. Everything we needed to do was already done, and they sounded great, so there was a little less pressure this time. Ninety percent of the donkey work had been done.” There was also an additional factor that made the process a little more straightforward. “Working with Stephen Street made a huge difference because he doesn’t mess around and he doesn’t pull any punches so if something isn’t right, he’ll let you know straight away.”

Stephen Street, the legendary Indie producer who has worked with some of the definitive artists in British music history including the Smiths, Morrissey, Blur, Suede, and many more. With that kind of storied career, he has managed first hand the traumas, conflicts, and struggles that come with making a great record, and he proved to be just the man Mason needed in the studio at the time. “Last year was a really mental year for me. We had our daughter. Me and my wife also got married. My step-mum died of cancer, I had to write an album and then record this album. There was a hell of a lot going on, so it was great to have someone who was very unshakable and who knew exactly what to do. So he was kind of the perfect guy for the job really. He knew what I wanted. It was a great experience. When you work with really top people like that, it makes everything a lot easier if what you’ve got is good.”

While it was important for the creative process to have such a level-headed, instinctive producer who immerses himself in his work, he isn’t much of one for banter in the control room, as Mason found out. “He’s a really good guy. He’s a really good person. Very intense in the studio and I am as well. A good way to get to know people is to try and make them laugh and see what they laugh at but getting him to laugh in the studio is almost impossible. You can see when you’re making a joke that he’s already thinking of the next thing, the next EQ or whatever. So you might as well just shut up. That made it more of a challenge. I managed to make him laugh a couple of times but he’s just very focused, but that’s what you want really.”

If Meet the Humans was Steve Mason reaching base camp, strapping on his gear and setting out for the climb out of depression, then About the Light sees him somewhere near the summit, possibly with a hot cup of tea. There is an air of positivity that runs through the album, a feeling that comes from Mason being at his most settled as his life has shifted both personally and geographically.

“Personally it’s generally more positive partly because I fell in love and got married and had a daughter and all those things and every day putting more and more distance between the way I used to live which was in the countryside, on my own, generally suffering from depression, so my life’s completely different now. So I think really just moving down here (to Brighton) was the first step on the path to being more positive and having a more positive life. Enjoying myself and feeling happy and being comfortable with saying I feel happy.”

While the majority of fans will be delighted at Mason’s positive outlook to life and his work, he is fully aware that this might not sit so well with everyone. “I always get the impression that people who like what I do are happy that I’ve found some sort of redemption. It’s very heartwarming. It’s nice. There are some people who moan, but I spent a good 15 years of my professional life in a depressed state. I’m not going to hold myself in a state of suspension just so that you can have these sad songs that you like.”

That being said, Mason still had some reservations about pursuing a more positive approach on About the Light. While understandable, any apprehensions he may have had have proven to be unfounded. The latest work to bear his name is a refreshing new chapter in his career that stands as one his most immediate and exciting work to date. Mason has not radically reimagined his sound; rather he’s refined it, producing an album wholly representative of who he is now. It’s recognizably a Steve Mason record but one that benefits from his newfound and well-deserved sense of contentment. It turns out being happy and settled suits him well, although he’s not suddenly discovered an untapped reservoir of inner zen.

“As an artist, your work should represent who you are at any given point when you’ve done that work. It did worry me about making a positive record. I don’t know what I thought but it’s worked, and I love it. It’s just about having the confidence to do it. I haven’t become a happy-clappy member of a cult or anything.”