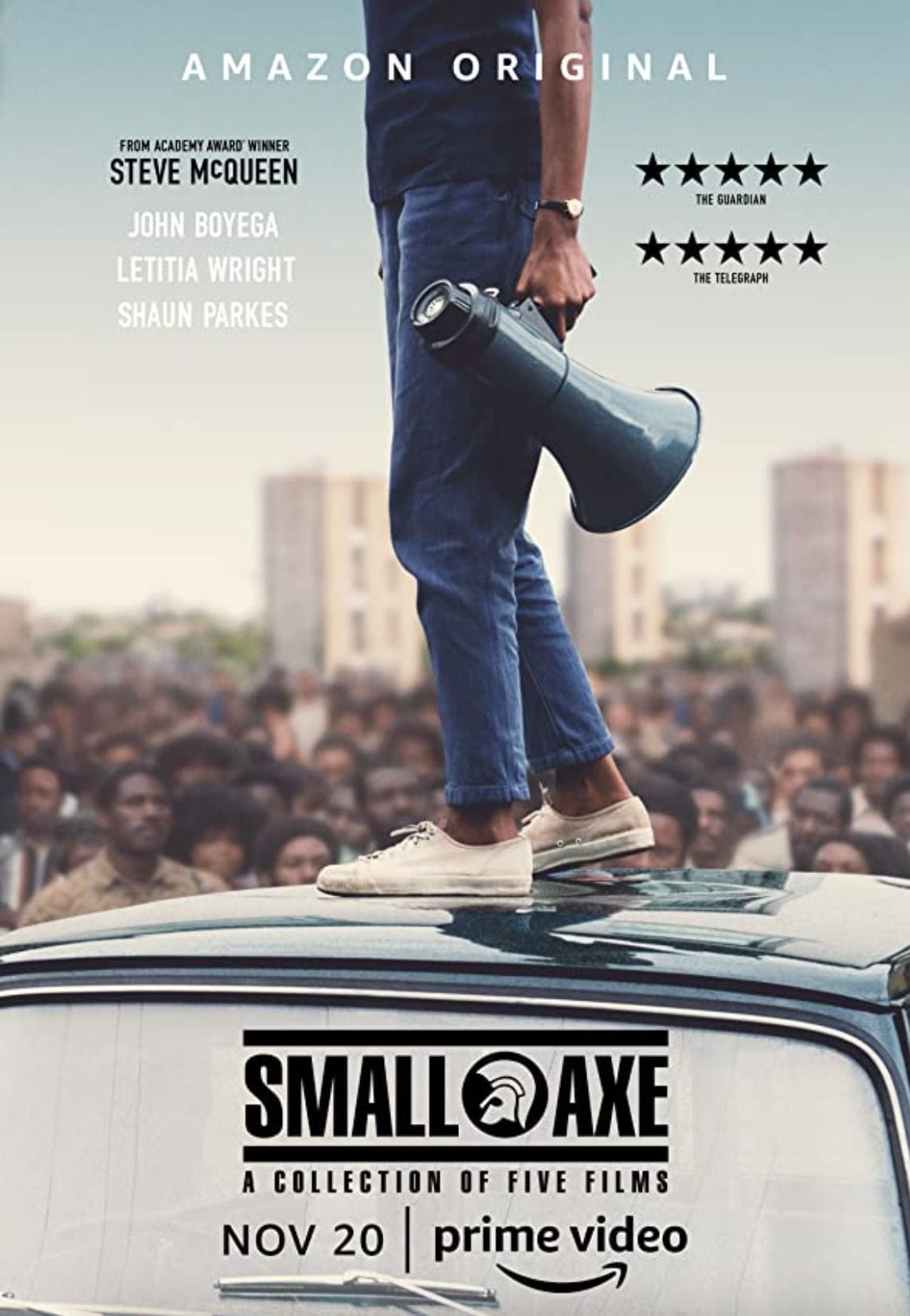 The title of Steve McQueen‘s five-part series, Small Axe (BBC in the UK, Amazon Prime in the US), is a powerful, political homonym. Formally, each part of the series is itself a small axe, working to tear down the dominant institutions created by, maintained, and perpetuated by British colonialism, a 400-year-old project that continues to shape the present. While the interlocking institutions that comprise Britain’s colonial system may seem indestructible, McQueen’s project recognizes, honors, and celebrates the myriad ways everyday Black people resist.

Every day, in ways both legible and illegible to the colonial system, Black subjects wield “small axes” and chip away at the institutions of white supremacy. As McQueen narrates, the revolution is not an event; rather, it’s a long, historical process, despite numerous setbacks and counterrevolutions. Interpreted as a homonym, “small axe” sounds like
small acts.

Small Axe is part of a long revolution rooted in Blackness; the title comes from the Bob Marley song of the same name. As Marley sings, “If you are the big tree / We are the small axe“. This is an expansive, capacious, transgenerational “we” that sings and practices revolution in myriad forms from protests in the streets to movies broadcast on BBC One and streaming through Amazon Prime.

Small Axe was produced and distributed by BBC Television over five weeks beginning on 15 November 2020. Five days after its British premiere, Small Axe made its US debut. Collectively, the five parts of Small Axe narrate the intergenerational struggles of London’s West Indian community from the late 1960s to the mid-80s. The struggles narrated in the series are struggles against structural racism that still shape the present, including police discrimination and brutality against Black communities; the rampant racism of the judicial system; and the White supremacy that animates and anchors the education system. Taken together, these five parts show the interlocking institutions that sustain colonial relations in contemporary Britain, and taken together, McQueen tells a story of how Black resistance is working towards creating a new world—one rooted in Blackness and Britishness.

The first part of Small Axe is “Mangrove”, based on the true story of the Mangrove Nine, a collective of British Black activists accused and tried for inciting a riot in 1970. What British law construed as a “riot” was, as McQueen highlights, a form of non-violent protest against the police who continually targeted, harassed, assaulted, and terrorized Notting Hill’s Black community. As journalist Catherine Baksi summarizes, “On 9 August 1970, 150 black protesters marched peacefully on the police station in Notting Hill to demonstrate against racial harassment by the police. They were met by 500 officers, whose heavy-handed policing was designed to antagonise them“.

Nine of the protesters were charged with inciting a riot. These nine became conspicuous symbols of Black Power in England, and were collectively known as The Mangrove Nine.

The mass protest was in response to police continuously raiding the Mangrove Restaurant in Notting Hill, a communal hub for West Indian immigrants owned by Frank Crichlow (played in the series by Shaun Parkes). Crichlow was a Trinidadian-born businessman and prominent civil rights activist whose café, which opened in 1968, became “a regular meeting place for many activists from the Caribbean community, as well as a fashionable haunt for celebrities: Jimi Hendrix, Nina Simone, Christine Keeler, and John Profumo“.

The Mangrove was the first Black Restaurant in Notting Hill. Participating in the capitalist economy, catering to West Indian immigrants, “set him on a collision course with the local police.” As Robin Bunce and Paul Field write, British police equated Black activism with “criminality“. In the span of 18 months, between January 1969 and July 1970, the police raided the Mangrove Restaurant 12 separate times, under the pretense of drugs on the property. No drugs were ever found.

The Mangrove Nine trial remains “Britain’s most influential black power trial”. As academics Robin Bunce and Paul Field wrote on the 40th anniversary of the trial in 2010, “From the outset, this was a political trial in which the police, Special Branch and the Home Office sought to discredit the leadership of the growing British black power movement.” This sham trial, whose sole purpose was to disband and delegitimate the growing Black Power movement, was held at the Old Bailey, a place that, as a lawyer describes in the movie, is “normally reserved for only the most serious of crime”. From the onset, the British state branded the Mangrove Nine as terrorists, as fundamental threats to British civil society. The state’s decision to stage the trial at the Old Bailey is in itself a form of state intimidation.

The judicial system, Jones elaborates, is designed for white people to speak to other white people without the participation of Black voices and perspectives. Collectively, the Mangrove Nine decide their voices will be heard at all costs. They defied the received wisdom of accepting a barrister who speaks the language of the law and understands the nuances of how the legal game works. Instead, they decided to be protagonists of their own stories and to represent themselves, despite the tremendous risk to their own freedom and safety.

Moreover, the Mangrove Nine refused to accept a plea bargain, despite the severity of the trumped-up charges which could have resulted in being incarcerated for more than a decade. As one of the Mangrove Nine avers, “the British courtroom is designed to keep the defendant shackled to ignorance.” The Mangrove Nine refused such institutional shackles. Instead, this collective steeped themselves in the law to both highlight the structural racism that defines the judicial system, and moreover fight to win their freedom, even though all are skeptical that a court designed to protect white interests, properties, and communities, could ever side with Black voices, and hence, legitimate such a conspicuous example of Black Power.

Late in the series, Jones confronts her co-defendant who, as the trial draws to a conclusion, is capitulating to the pressure and considering the offered plea bargain which remains on the table. Jones lashes out that the advising lawyer urging the defendant to accept a plea bargain is “trying to divide us”. Jones continues: “For 400 years people like him trying to divide our people, undermine us. This trial is another way of doing that, of destroying a strong Black movement in this country. We have to stick together. As a collective.”

Collective is one of the keywords of the “Mangrove” specifically and Small Axe as a whole. In contrast to Western White culture that privileges the isolated individual as the focal point, the site of empathy, and the center of narrative gravity, Small Axe tells a collective story that spans generations and shows how Black Power is not a political movement of the past, but a force that assumes different political, social, and cultural forms in the present.

Black Power is an international movement, but it becomes realized in specific national contexts. Darcus Howe (Malachi Kirby), one of the Mangrove Nine and a leading Black activist, begins his closing statement by echoing Shakespeare’s Hamlet: “The time is out of joint; O cursed spite!/ That ever I was born to set it right!” [I.v.189-190]). However, Howe refigures these famous lines, transforming the solipsistic speaker into a collective speaker and moreover, figuring Black subjects as agents. Darcus cites Shakespeare with a slight but mighty transformation; he changes “I” to “Black people”: “The time is out of joint; / Oh cursed spite! / that ever a Black people, were born to set it right…”

Throughout the speech, Darcus repeats the line “We say it’s closing time…” which signifies both the close of the trial and more powerfully, the slow closure of White supremacy—the slow sunset on the British Empire. A new day is on the horizon and every small act/small axe helps bring that new day into existence.

The “Mangrove” narrates how Black Power was and is a potent, collective force of radical Black agency. Against all odds, after 55 days at the Old Bailey, the Mangrove Nine were acquitted. Moreover, the trial “forced the first judicial acknowledgment that there was ‘evidence of racial hatred’ in the Metropolitan police.”

In contrast to the pervasive attitude of cynicism that declares the world fixed and existing power structures unbeatable, Small Axe narrates how Black Power has been and remains a viable force that shapes British and world history. The key is to learn to see and recognize it.

Small Axe begins with the most conspicuous example of Black Power—The Mangrove Nine—but throughout the series, there are more subtle, less visible forms of such radical Black agency. Black Power is everywhere in Black communities. The key is to see it, to have mainstream cultural texts tell such stories of Black Power.

Tellingly, the opening chapter of Small Axe is not entitled “The Mangrove 9”, which would have been analogous to Aaron Sorkin, who entitled his own 2020 drama about radicalism and biased judicial systems The Trial of the Chicago 7. Instead, McQueen entitled the first part Mangrove, the name of the restaurant that was a central hub for meeting, educating, and building a Black Power network.

In the closing statement of the trial, Howe describes the Mangrove as more than a restaurant. It’s an “institution” born out of resistance. Howe narrates history from below, history from a Black perspective, “I submit to you that Notting Hill is a very unique community where many people from the West Indies live. It is a community that was born out of a resistance to a series of backward attacks from the police.” These police attacks are not isolated incidents, nor a form of structural racism unique to Notting Hill, but rather, a pervasive environment of anti-Black violence that emerged, as Howe explains, from the “stench of British colonialism”.

Institutions of Black Power are created out of necessity, out of struggle, out of resistance, and such communal spaces are typically illegible to the dominant, White power structures. The Mangrove was a gathering place that became a “community restaurant” and became an “institution” of Black Power that the community needed.

In the closing moments of the movie, after all nine defendants are found not guilty of the most serious charges, the Mangrove Nine victory is situated in a wider context. Dalston “Dom” Isaacs (
Gary Beadle) speaks with Frank Crichlow. Isaacs tempers the victory by saying: “We might have won the battle, Frank, but we’ll see about the war.” Isaacs then tells Crichlow that he can’t take another winter and he’s going back “home”, referring to the West Indies. Crichlow corrects him that the Mangrove is now “home”.

This triumphant ending, of establishing new Black institutions that can nourish Black lives and build new Black collectives, is undercut by the ending, though. After the camera fades to black, ending the narrative proper, the postscript reads: “The Mangrove restaurant and Frank Crichlow continued to be harassed for a further eighteen years. [. . .] In all Frank Crichlow faced three trials and was acquitted three times.” The final words that appear read: “He closed the Mangrove for good in 1992.” This home, this Black institution, is now only a memory.

While the closure of the Mangrove is a defeat,
Small Axe challenges viewers not to succumb to the pessimism and capitulate to a world founded on anti-Black violence. Instead, Small Axe challenges viewers to recognize how new Black institutions continue to form and how within these institutions and networks, Black Power remains alive and active. Small Axe is itself such an institution and this is why it’s not only the best but the most important series of 2020.

Baksi, Catherine. ”
Landmarks in law: when the Mangrove Nine beat the British state.” The Guardian. 10 November 2020.