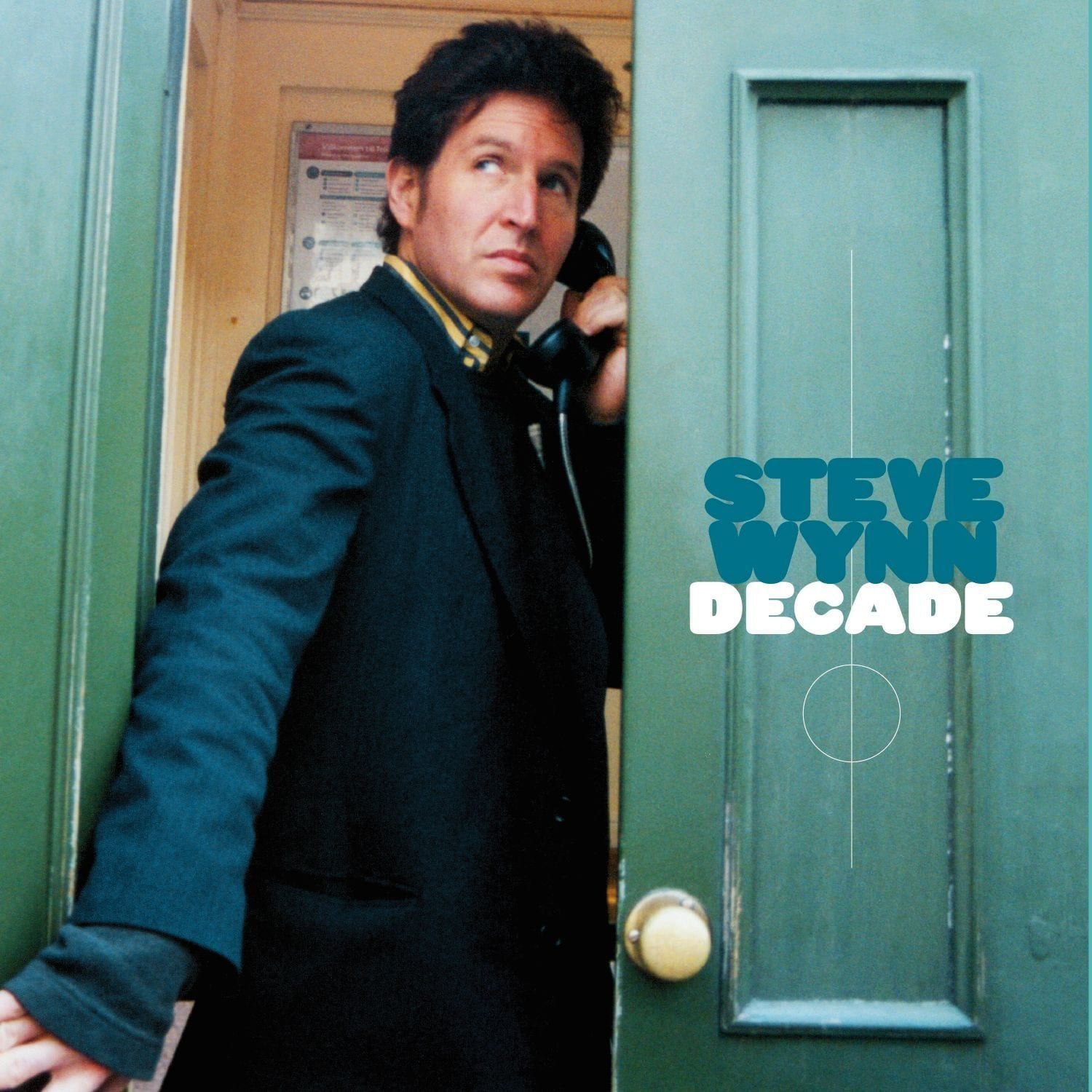 Real Gone Music has partnered with Steve Wynn (The Dream Syndicate) for a new 11-CD set titled Decade, releasing 23 October. The collection follows Wynn’s guitar-driven albums released between 1995 and 2005, most of which have been long out of print. In addition to the original LPs, some of which have been expanded to two CDs, the collection features a wide range of rarities and 57 previously unreleased tracks, including demos.

Decade offers a glimpse into Wynn’s creative process and chronicles the especially fertile period in which he relocated from Los Angeles to New York City. He teamed with fellow musicians from the band Come (on the Melting in the Dark LP) as well as Richard Lloyd, the Fleshtones, Eric Ambel, and numerous others. Wynn collaborated with close friend Pat Thomas on the release, sifting through hours of recordings to find the best possible material to round out the project.

Among the many buried treasures is the song “Make It Up to You”, a quintessential Wynn composition, its jangling guitars, insistent rhythms, and a lyric that is equal parts universal and deeply enigmatic standing as firm reminders of his particular genius. It’s a splendid marriage between classic pop songwriting and a desire to move us into unfamiliar territory, something Wynn has done consistently across nearly 40 years as a recording artist, demonstrating once more how he became one of the most revered songwriters of his generation.

“I’ve always liked that song a lot, and I’m surprised I never put it out on any legit records,” he says, speaking with PopMatters from his home in New York City. “I’ve recorded it a couple of times. I recorded it first with Eleventh Dream Day, and that came out on a mail-order record that was released in Germany. Pretty obscure. But I’d forgotten about this version that I’d recorded with Come during the Melting in the Dark sessions. I thought, ‘Why did I leave that off the record? What was I thinking?’ It’s nice that it’s come out now.”

Wynn offered more insights into Decade in the interview that follows.

This box begins in 1995, and you’d been out of the Dream Syndicate for some years by that time. Did you feel like you’d found your legs as a solo artist by then?

I moved to New York in 1994. I already had a few solo records under my belt. I’d done two for Rhino [Records] and then Fluorescent. With those, I was still in the mindset that was a combination of being a guy who used to be in a band who was trying to forge his own way and also [trying to figure out] what my career was going to look like.

When I moved to New York, it was almost like a reset. I was in a new place where all my favorite records, books, and movies came from. Whatever it was, I hit the ground running. I never had a period before, or since, where I wrote so much, recorded so much, collaborated so much, did demos so much. I couldn’t stop creating.

Some major shifts were happening in music around that time. How inspiring was it to be in a place where there was music happening that was so different from what you’d been a part of in LA?

It was inspiring in a lot of different ways. You could walk to the East Village and see three shows in one night, go to two cool bars and do it all on foot. It made me feel like I was part of the scene. In LA, even though a lot of my friends were musicians and there were clubs I loved, it was harder to call it a scene.

People talk about the Paisley Underground, which was a group of friends, like-minded musicians. But we didn’t hang out somewhere. We all lived in a 30-mile radius from each other. When I moved here, I went out every night, from the time shows started to the time bars threw me out. I couldn’t get enough.

I met people who were my heroes, like Richard Lloyd. It was also the period when indie rock and grunge got into gear. It was like, “This music I started making in 1982 is suddenly accepted now.” That was a nice kick in the pants too.

Did you allow yourself to be influenced by the music that was happening?

I loved Nirvana, and I thought it was great that music like that was as big as it was. What followed from Seattle was more metal-based, and it didn’t feel like anything I cared about. But there was a lot of cool indie rock happening: Pavement, Yo La Tengo, bands that were probably influenced by what I’d done with the Dream Syndicate.

In turn, that influenced me to say, “Oh yeah, there’s a way to make this kind of music that I had been taught, in the ’80s, was commercial suicide.”

How did you get together with the band Come for 1995’s Melting in the Dark?

I knew Thalia Zedek for a long time. Her band, Dangerous Birds, opened for the Dream Syndicate on our first tour. She became a good friend, and I followed what she did with Live Skull. When Come’s album 11:11 came out, I picked it up like I would do with all her stuff. It was music that I loved and had kind of stopped making at that time. Not only was I digging it, but I filed it away as, “Wow, that would be a fun band to work with.”

You’ve included a lot of demos across this set. Are you pretty assiduous in archiving your own material?

I’ve always been into recording. Even pre-Dream Syndicate. I had a four-track reel-to-reel that I did my first single on [as 15 Minutes]. When four-track cassette machines came along, I went bonkers for those. I’ve always been a fan of home recording and demos and using that as a way for writing, but I don’t organize things. I don’t archive them. I don’t finish them. I do a lot of rough sketches to get where I’m going.

One of the reasons this set came out is that I had a massive box of DATs, cassettes, every format that you could think of. A friend of mine, Steve Rosenthal, who ran the Magic Shop studio, started a new studio where he was primarily focusing on transferring items to digital. He had just done this for Lou Reed’s tapes with Laurie Anderson. He told me about that, and I said, “I’ve got a bunch of stuff and would love to put it all in one place.”

Then Pat Thomas and I sat in a hotel room and in Burbank for two days and listened to everything and made notes.

[Laughs.] It was labor-intensive. Pat knows my stuff; he’s brutally honest. He would say, “Nope. Yes. Forget it.” It was like The Gong Show.

[Laughs.] It sounds like you’ve had this long-standing relationship with him and he’s one of your confidantes.

We’ve compared it to Lou Reed and Lester Bangs. Someone you go to who will tell you when you’re creating bullshit or doing great. Pat’s always been like that. But the difference with Pat is that he’s also an incredible musician. He’s made great records with his band Mushroom, and he’s written fantastic books. The fact that he knows my material, my history, and what I’ve tried to do and what I haven’t succeeded in doing [means that] I trust him.

How much does new technology spur your creativity?

When I got my ADAT machine, there was an Edwyn Collins single called “A Girl Like You”, and if you listen to that, you can kind of tell that it’s homemade. It sounds like a classic soul record, but there’s something about it, to me, that sounds like he made it at home. It was not the normal sound you’d hear on a record at the time. I thought, “I want to do more stuff like that!” The ADAT offered more tracks, more things I could do.

I’ve always been a fanatic for drum machines. That’s ironic because I married a drummer.

I think she gets jealous of my drum machines sometimes, but I’ve always been crazy for them. Every time I’ve bought a drum machine or a new guitar, but especially drum machines, I’d have ten new songs. Just by wanting to learn the new toy, I start writing.

At some point, you added the Miracle 3 as your band. What was thinking behind that?

As much as I had wanted to be a solo artist, leave the Dream Syndicate, and to see other people as it were, I’ve always functioned as a band member. No matter what I’ve done, once I’m on stage, I’m part of the band. I thought that being one guy who puts his name on the records might make people think they were going to see Cat Stevens or James Taylor. I decided to do the Nick Cave thing. If I put an “and the something” behind my name, it’ll let people know that we’re still rocking out.