His one-man band is named the Suitcase Junket, but Matt Lorenz is more than a talented man of many instruments. As he demonstrates in his new music video for “High Beams”, premiering today at PopMatters, Lorenz ties his cleverly creative instincts and other passions into various works of art. Who else would illustrate a song about an unsteady romantic relationship by using stop-action motion with neckties to form some of the lyrics?

As a kid born and raised in the woods of Vermont with his sister Kate, he was first fascinated by stop-action after seeing the family babysitter grab their VHS camcorder and make a GI Joe action figure “look like it was riding around the living room in a shoe-boat”, Lorenz said in an email interview to accompany this premiere. “I remember thinking that was pretty magical.”

During an initial five-hour shoot in Thomas, West Virginia, on a rare day off from touring, Lorenz worked with friends Seth and Nellie Rose. Besides ties, they moved around other objects — a chair, a clothed mannequin with a small suitcase for the head, his own speedy character wielding swords or stepping out. He completed the process with another 10 to 12 hours of filming and editing.

“What I really like about it is the giving of life to inanimate objects,” Lorenz offered. “I love thinking that they have their own world going on that operates at a much slower pace than ours.”

Check out the Suitcase Junket’s whimsical video for “High Beams” now. Then read on as Lorenz reveals more about the opening cut off Mean Dog, Trampoline (released on 5 April via Signature Sounds), what other items he collects, and how a missing hi-hat stand affects his stage act. (The album, a follow-up to 2017’s Pile Driver and a deviation from numerous homemade solo efforts, was produced by Steve Berlin of Los Lobos and previously reviewed at PopMatters.)

“High Beams”, recorded last year with the rest of Mean Dog, Trampoline, “is more a story than reportage,” Lorenz explained. “I liked the idea of opening the album with a song that jumps into a conversation/argument halfway through: Do you really wanna feel this way or would you rather stay and make this night about us? / She was yelling right into my ear and she smelled like beer / She said ‘How could you wanna be without us?’

“Throughout the rest of the tune, the narrator swings back and forth between doubt and surety about the relationship,” he added. “For me, that is the heart of the tune, that pendulum swing from not feeling sure you’re doing the right thing to being dead certain that it’s the greatest thing around. In this case, the particular romantic setting is fictional, but the feeling is real. I’m a seeker, a curious person and a questioner, so I’m quite familiar with riding the pendulum.”

Asked who was the creative genius behind the neckties in the video, Lorenz said, “The writing with neckties was a brainchild of mine, though I don’t know if I’d use the ‘G’ word for that. It was fun developing a cursive style that flowed with the way the ties naturally wanted to move. Also, the color and sheen of those old silk ones is something I could stare at for many hours. Which I did.”

Lorenz has collected neckties since he was a teenager, and continues to find more at thrift stores during tour stops. “I’d guess I have hundreds by now. (A dozen of which I actually wear regularly),” he pointed out.

So Lorenz’s “fairly substantial collection” hanging in his van naturally worked its way into the video, especially with a little help from his friend.

“I had a bunch of neckties and was thinking it might be neat to have them devour me and generally move around like a blobby little beast, and when Seth saw them, he said, ‘Wait, I’ve got a ton of ties to add to this pile,’ ” Lorenz said.

It would seem like a constant traveler who calls himself the Suitcase Junket (and turned an antique suitcase into a bass drum) might have some excess baggage, too. Compared to his necktie collection, though, it’s “much smaller in terms of numbers, but much larger in terms of volume,” he quipped.

Feeling lucky that there’s no lost-luggage horror stories to tell, Lorenz does share the time he left behind a valuable accessory to his stage presentation. 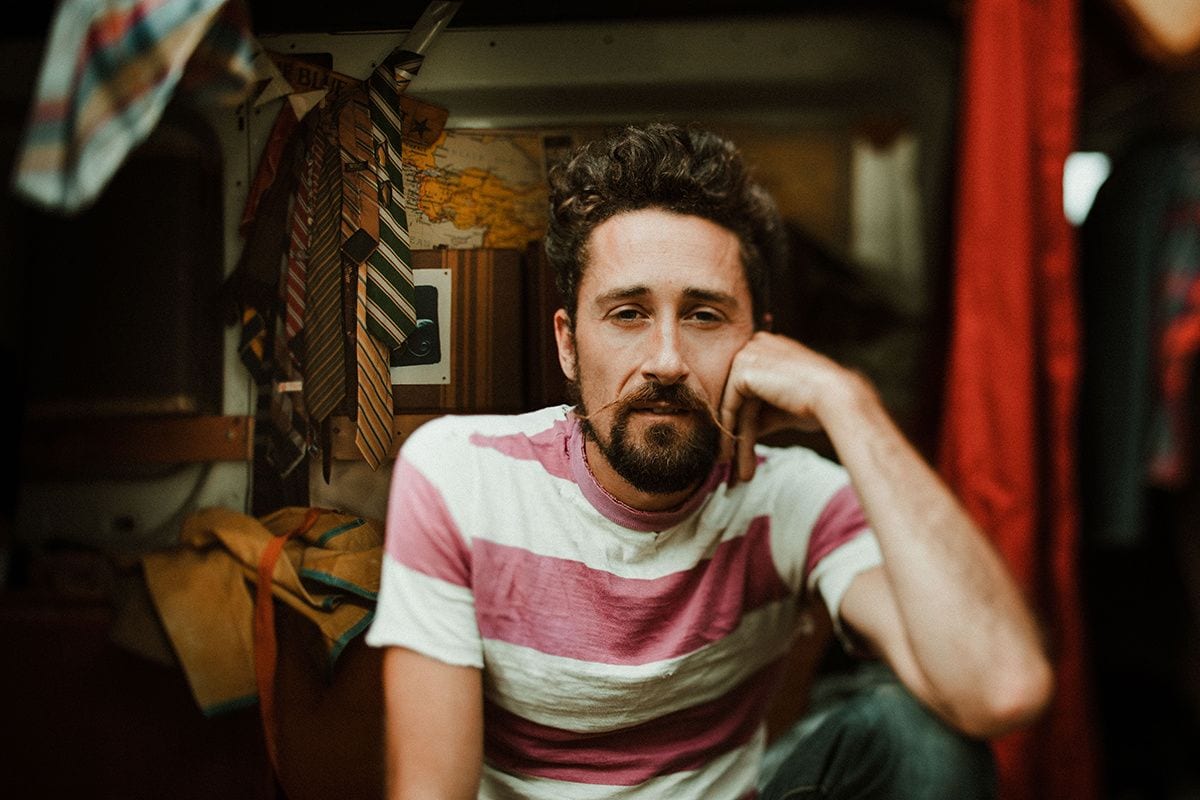 The Suitcase Junket’s entertaining set includes, as he describes, “a pile of homemade drums that I operate with my feet”, while singing and playing guitar. After seeing him as a supporting act for Tift Merritt at the Soiled Dove in 2017 in Denver, I can appreciate how difficult it must be to function without all the moving parts.

“Once, I left my hi-hat stand behind and had to play a show without it. That’s when I learned that somehow my right toe’s movements were weirdly wrapped up with my brain’s ability to remember and sing lyrics. (The more you know …),” recalled Lorenz, whose one-man band wizardry on the record lacks only a couple of percussion, key and bass tracks.

These days, Lorenz said he’s “limiting my acquisitions,” but does maintain significant collections of “old buttons, books, broken chairs, bones, old silverware, wood and ball-peen hammers,” adding parenthetically, “(Lot of Bs in there. Weird. I’ll have to look into that.)”

Lorenz, who has performed under the Suitcase Junket guise since 2009, settled in Amherst, Massachusetts, after attending Hampshire College, then playing music in the streets of Europe for a year with one of his buddies. He started a band with his sister called Rusty Belle, but the solitary satisfaction of making music on his own eventually kicked into gear for a guy who has also utilized a washboard and old gas can in his act.

Mixing skill with imagination and inspiration, Lorenz throws himself into his work, but contends it’s his voice that makes him feel at ease more than any musical equipment he plays.

“Singing is probably where I feel most comfortable. However, I’ve been touring this one-man-band setup pretty hard for the past five years and it’s really come to feel like a full-body instrument,” acknowledged Lorenz, who currently lives with “my sweetheart and our dog in a nice little house” built in 1791. “It’s gotten to the point that now when I pick up a guitar, my feet get itchy.”

That makes sense because the Suitcase Junket certainly knows how to stay on his toes.