It’s a Friday night in San Francisco and there’s a cosmic vibe surrounding the SFJazz Center here on the third weekend of July. The Sun Ra Arkestra is in the midst of a rare four-night run and what a treat it is for aficionados of the long-running avant garde jazz ensemble. Trends come and go in the music world, but then there are enduring pioneers who become icons due to their influential style and timeless tunes. The Sun Ra Arkestra is such an outfit, bringing their futuristic sounds to Planet Earth since the 1950s.

When legendary band leader Sun Ra passed on from the Earthly plane in 1993, it could have been the end of the road for the Arkestra. But the mission was not yet complete and so the band has carried on, touring under the direction of stalwart saxophonist Marshall Allen since 1995. Now in his 95th year since arriving on this third stone from the sun, Allen has been in the band since 1958 to generate an astounding career longevity that may never be matched.

There’s an added element to the first two nights here as the Arkestra will deliver an encore performance of their soundtrack to Sun Ra’s 1974 film, Space Is the Place (as they did on Thursday) before delivering regular concerts on Saturday and Sunday. But there’s little that’s “regular” about the Sun Ra Arkestra in the jazz world, for there are few bands with a founder who claimed to come from another world. Yet legend has it that Sun Ra came to Earth from the planet Saturn to help enlighten the masses for spiritual liberation and socio-political freedom.

This is a mission that remains an ongoing struggle in 2019 with Donald Trump’s foul regime in power, hence the Arkestra continues to deliver a vital service in a world gone mad where many feel trapped in a prison of lies. The African-American struggle for equality was a key theme of Space Is the Place, with Sun Ra using the film to help further the Afrofuturist movement that he pioneered with his music and philosophical teachings. The film was in fact largely based around the college course “The Black Man in the Cosmos” that Sun Ra taught at the University of California at Berkeley in 1971. 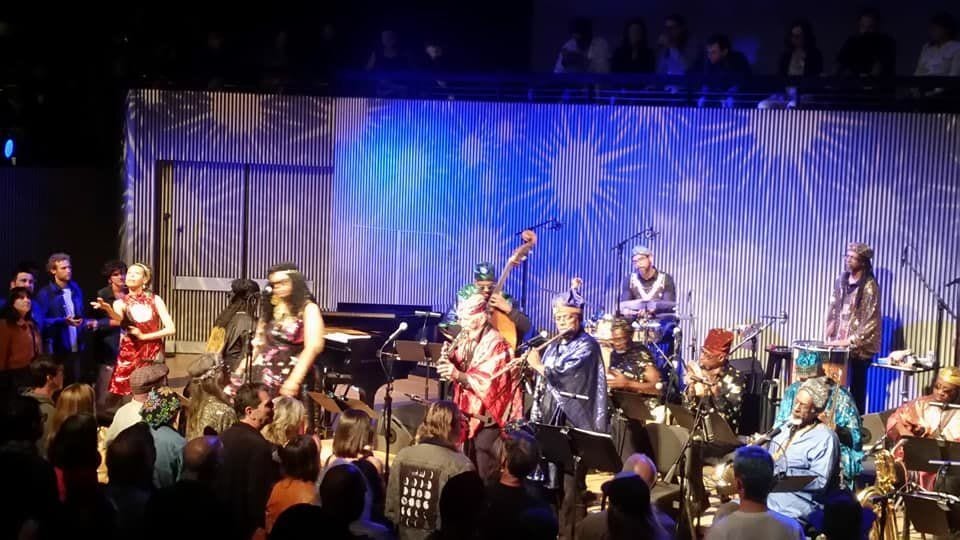 The Sun Ra Arkestra performs the soundtrack to “Space Is the Place” – 19 July 2019 / Photo by Greg M. Schwartz

Watching the film at home on the Youtube and seeing it projected here behind the stage as the Arkestra performs the soundtrack is like the difference between night and day, as the music comes alive in a vibrant manner that tingles the senses. “Everything is in place except you Planet Earth,” sings the band’s female vocalist early on, setting the tone for a key theme of both the film and the Arkestra’s mission at large. Band members chime in on the mantra of “Calling Planet Earth” while the extensive horn section delivers sonic blasts to wake up the masses. Other highlights include the elliptical jazzy stylings of “Satellites are Spinning”, with lyrics that “a better day is breaking” and “the galaxy is waiting”.

Could it be that Earth plays a more important role in the galactic scheme of things than the powers that be would have us know? “Outer Spaceways Inc” is classic Sun Ra with the band laying down a swinging groove and dynamic polyrhythmic percussion as the vocalist sings, “If you find Earth boring, just the same old same thing, come on and sign up for Outer Spaceways Incorporated”. A peak moment occurs during a jam on the title track of “Space Is the Place”, with several band members going New Orleans second-line style out into the audience to get up close and personal with attendees. Marshall Allen delivers an energetic sax solo here that lights up the stage, as an uplifting effect permeates the auditorium. 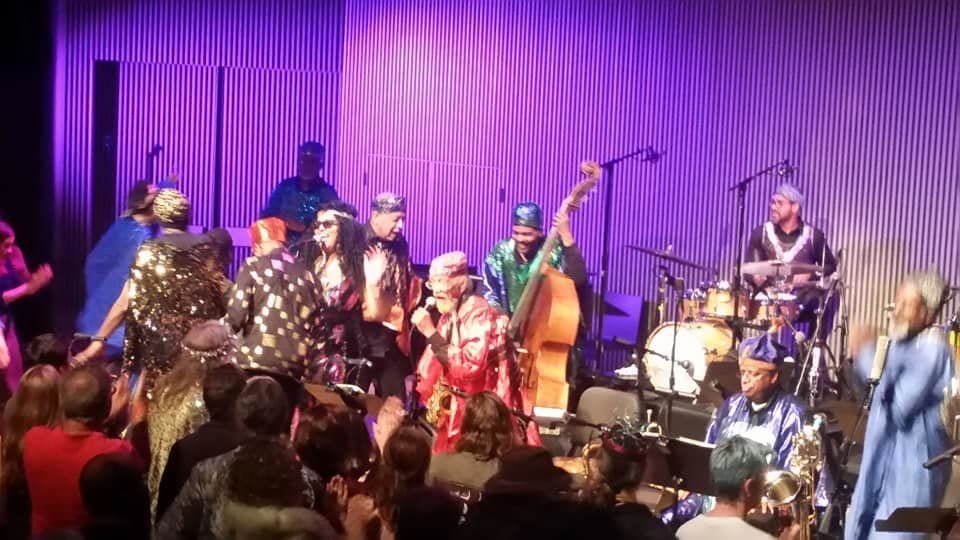 A key scene in the film occurs when government agents try to grill Sun Ra about how he converts his musical vibrations into energy to power his spaceship, one of the film’s most visionary concepts. Whether sonic vibrations can actually be channeled into kinetic energy to power a spacecraft remains to be seen, but there’s no doubt that the tone scientists of the Sun Ra Arkestra are onto something with the metaphysical energies they can conjure to stir the soul of listeners.While Friday’s show had a clear course charted through the spaceways, Saturday’s show is more like the U.S.S. Enterprise boldly venturing into the great unknown of deep space. Allen leads the ensemble on a dazzling trip through the Arkestra’s many stylings, making it feel like ambassadors from another planet have arrived to enlighten us Earthlings about how harmonious life in this galaxy could be if we could only get past our petty differences.

An early highlight finds the band throwing down a more traditional big band style number with the vocalist singing of a paradise and how “We’ll take you places you’ve never been before…” One of the weekend’s top moments occurs with the classic “Angels and Demons at Play”, one of the Arkestra’s most enduring tunes. Here Allen joins the female vocalist in harmony on the opening lines about those angels and demons. He then picks up a unique electronic wind instrument (known as the EWI) with which he conjures spacey cosmic tones that create an otherworldly effect over the mesmerizing groove. 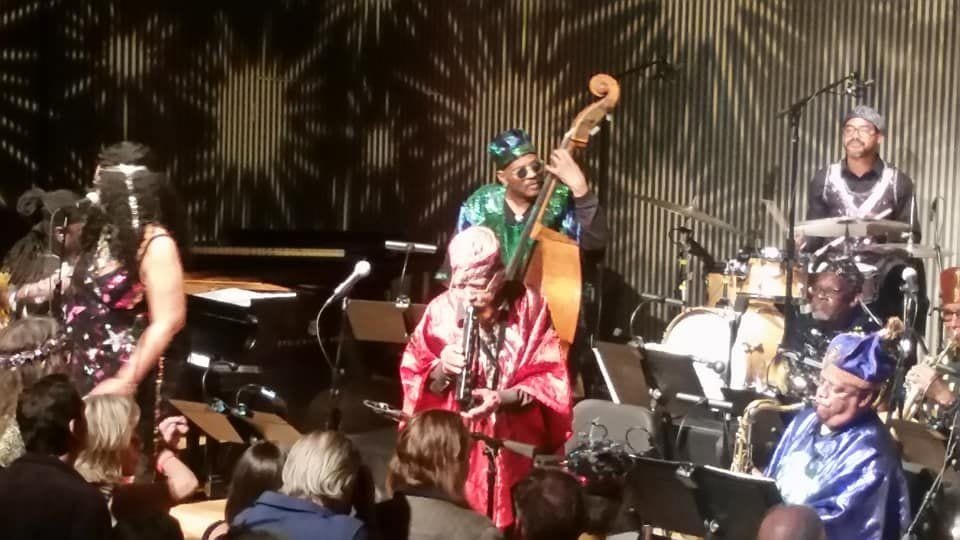 The Arkestra delivers another vibrant second line jam during “Walking on the Moon” as the vocalist implores listeners to “Take your first step into outer space”, with half a dozen band members then taking their horns out into the audience in what now seems like a hallmark element of the Arkestra’s performances. “Wake up!” she exclaims at the song’s conclusion. There’s a unique retro-futuristic sound here, demonstrating the Arkestra’s unique ability to blend traditional jazz styles with space-age vibes.

The set continues to soar on “Rocket Number Nine Take Off for the Planet Venus”, an upbeat number where the ensemble gels over a walking bass line with fluid horn solos on a tune about a spaceship trip that makes stops on Mars and Jupiter as well as Venus. The show ends with a transcendent conclusion as Allen leads the band through a majestic journey on “We Travel the Spaceways”. Here the ensemble starts with a simple melodic motif and builds a shimmering jam that seems to transport the SFJazz Center to an intoxicating higher dimension of peace and harmony.

Sunday is promised by the band to be a completely different show and largely is, due to the Arkestra’s vast repertoire. A handful of peak moments from Saturday are recycled, but no one is complaining when a stellar rendition of “Walking on the Moon” is reprised. “We Travel the Spaceways” is moved from the end of the show to the middle of the set, where it again conjures a glorious sonic journey while also serving as the evening’s second-line jam.

A groovy uptempo tune credited to the late Arkestra saxman Pat Patrick conjures vibes from the Mos Eisley Cantina band in Star Wars and it’s not hard to imagine that some of these musicians may indeed have lived a past life on Tatooine. “When There is No Sun” brings things down a notch as the band explores the bluesy ballad with some delicate interplay between piano and sax, while “Somebody Else’s World” explores a spacey sonic landscape where the percussion section gets going again. 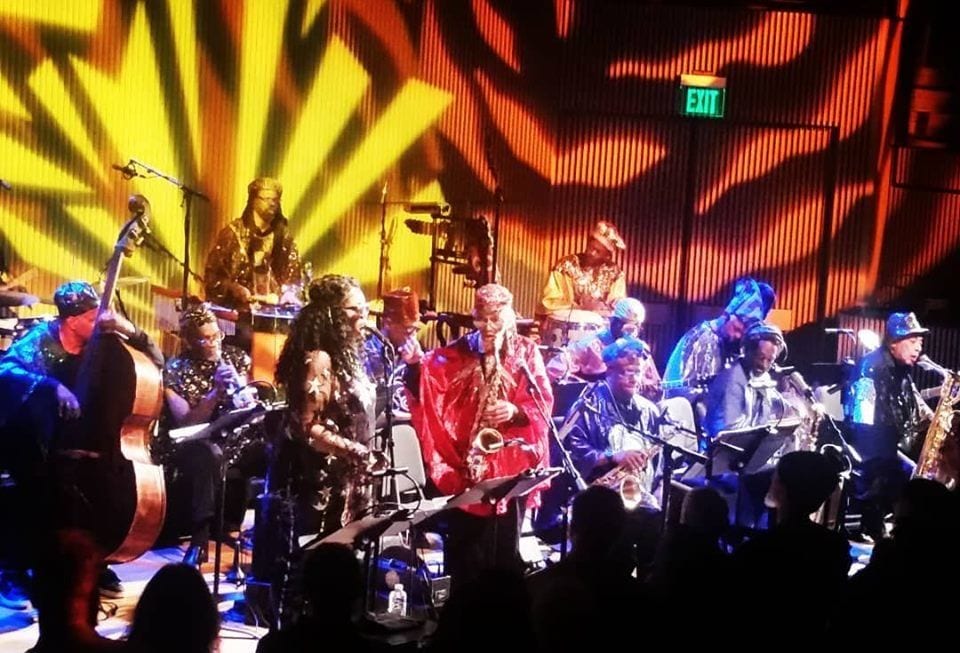 “Angels and Demons at Play” is reprised toward the end of the show, here billed as a collaboration between Sun Ra’s lyrics and Marshall Allen’s music. Allen struck sonic gold with this tune, with a timeless groove and melody that’s as ripe for repeated improvisational explorations as the Grateful Dead classics of the ’60s that continue to be such enduring jam vehicles in the 21st century. The percussion section generates a compelling sonic wave with the infectious bass line, as Allen and the horns surf on top with nimble melodies on an extended exploration.

The Arkestra concludes the run with a climactic mashup of “Space is the Place” and “We Travel the Spaceways”, generating a very groovy and uplifting finish for what has been a special weekend at the SFJAZZ Center. The Sun Ra Arkestra’s influence on the modern music world is practically incalculable, with artists influenced by the Arkestra including George Clinton, Sonic Youth, Lady Gaga, D’Angelo, Phish, and Kamasi Washington. Perhaps someday Earth will join the galactic community and we will learn how truly visionary Sun Ra was. But for now, we still have the Sun Ra Arkestra providing musical enlightenment with clues to Earth’s greater destiny.