Few musicians claim to be an angel from outer space, but jazz legend Sun Ra was not just a musical pioneer but also a trailblazing philosopher and visionary spiritual seeker. His legend continues to grow in the 21st century thanks to the ongoing efforts of the Sun Ra Arkestra, now with longtime saxophonist Marshall Allen charting the band’s journeys through the supersonic spaceways and interstellar low ways.

“Sun Ra claimed to have come from the planet Saturn to bring peace to Earth. His Arkestra continues this mission, needed now more than ever,” the SFJazz Center’s website says regarding the upcoming four-night run with the Sun Ra Arkestra from July 18-21. This sentiment about using music to promote peace and harmony speaks volumes to how the jazz ensemble’s legendary founder viewed his mission here on the third stone from the sun.

Integrating classic big band swing with free jazz, electronic music, African-style percussion, and a trailblazing cosmic mysticism, Sun Ra recorded more than 100 albums while touring around the globe for decades before departing the planet in 1993 at age 79. But the band has carried on with the mission to help transform this world gone mad, under the direction of Marshall Allen since 1995.

Having celebrated his 95th birthday this past spring (or his “Arrival Day” as the Arkestra terms such occasions), Allen is re-writing the book on how far a musician can push their craft in the 21st century. 86-year-old Willie Nelson, 79-year-old Phil Lesh, and 75-year-old Glimmer Twins Mick Jagger and Keith Richards are all inspiring music legends who continue to push the envelope on tour in 2019, but Marshall Allen is the senior elder of the live music world. He’s been playing with the Sun Ra Arkestra since 1958 and at this rate looks like he might just keep going until a better day for Planet Earth finally arrives.

When PopMatters was offered the opportunity to chat with Allen, we jumped at the chance to get the jazz great’s thoughts on his illustrious career with the Sun Ra Arkestra. Allen says that Sun Ra forced him to change his entire approach to playing music, describing a process in which Sun Ra insisted that his band members get a handle on his space-age teachings before even focusing on the music itself. Sun Ra would even stop rehearsals to lecture to the band on topics ranging from Egyptology to the outer cosmos.

“Then you can understand what the formula is, and then you understand where he’s going, and that stopped me from thinking [too much],” Allen says of his early days in the Arkestra where he apparently focused too much on the music per se at the expense of the performance. “That didn’t work the way I was thinking, because it was the way I was doing things and he wasn’t doing it that way… I had to unleash myself and quit thinking and do things by the spirit of things, you know? And that’s the secret of that. And then whichever way that goes, then you get back to Sun Ra and then you can have a better understanding of what he’s trying to get you to do.”

This musical partnership would go on to guide the course of Allen’s life forever after, leading to a career of more than six decades that may never be matched.

“It changed my whole destiny, my whole thing. So then I had to shut up and listen, and that’s what I did for most of my career with Sun Ra — was listen to the vibrations and the way that he felt the day and the way he felt where we were and I had to be conscious of all those things,” Allen explained of Sun Ra’s penchant for basing the Arkestra’s performances around the mood of the moment. 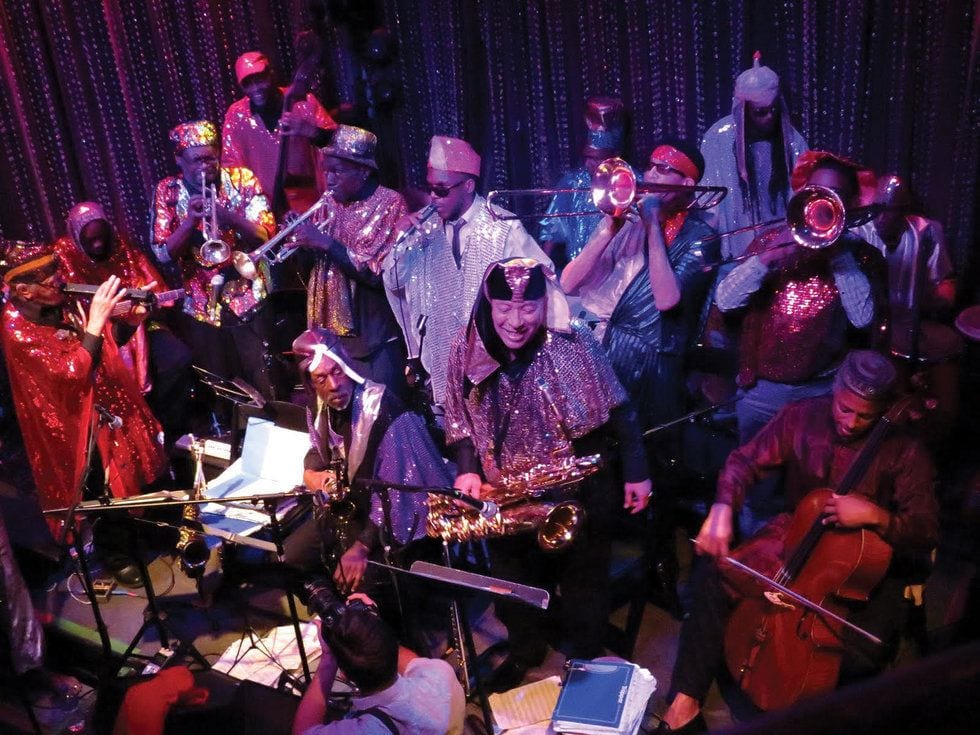 One of Allen’s early challenges with the Arkestra was a directive from Sun Ra that he wanted the saxman to develop a more electronic sound to keep the band evolving with modern technology. Allen says he spent years trying to make his horn sound more electronic.

“So that makes you grow and makes you think and makes you understand that music is a language and that it has an effect on people,” Allen says of his efforts searching for the sound that Sun Ra was after.

With so much material to choose from, selecting a repertoire to focus on in the 21st century presents a challenge in itself. Allen says he has about 100 songs in the current repertoire, “but we don’t have enough time to play ’em all”. While some of the Sun Ra Arkestra’s avant-garde stylings can be too “out there” for the uninitiated, Allen has developed a knack for focusing performances around the band’s more accessible material. The band’s theatrical delivery also makes a Sun Ra Arkestra performance one of the unique events in modern music.

In 2019, the Arkestra has also been delivering occasional performances of the soundtrack to Sun Ra’s film Space is the Place ( including the first two nights of the SF Jazz run.) The 1974 cult classic Afro-futurist science fiction film remains a vital part of Sun Ra’s legacy, putting radical spiritual and socio-political themes on display in intriguing fashion. Inspired by “The Black Man in the Cosmos” course that Sun Ra taught at UC Berkeley in 1971, the film blends lively musical performances with some of Sun Ra’s deepest philosophical explorations such as utilizing a spaceship powered by his music.

As to the topic of a government cover-up of extraterrestrial visitations to Earth, Allen says Sun Ra would at times talk about things the military was experimenting with as well as how Uncle Sam would try to hide such information from the people.

“What he tried to do, he put it in the music; he put all these things in the music to wake the people up. And that was our mission to do that, to wake up the people,” Allen says of the many varying themes about space exploration and spiritual liberation that Sun Ra put into his songs. “He would always say, ‘The Creator gave you a gift’ and ‘Let’s go enlighten the people of the world through music.’ And then that’s a big job, you know?”

When asked if the band ever spotted a UFO on tour, Allen spoke of a memorable close encounter in Oklahoma when Sun Ra was still living.

“One followed us on the road one day when we were out in Oklahoma… and the spaceship followed our car down the road. And we were all looking out the window at it, saying ‘Look at that, look at that’, it was a spaceship. And then bam, it disappeared, like sheeeeoooooo… It couldn’t have been no plane or helicopters. And then when they shot off, we knew it was [a spaceship],” Allen recollected.

The more well known that the Sun Ra Arkestra became, the more that Sun Ra began to attract attention from like-minded mystics and seekers. In his 1997 biography Space Is the Place: The Life and Times of Sun Ra, author John F. Szwed details a tour tale from Turkey in 1990 where Sun Ra was approached by a group of mystics who gave him The Book of Information. Purportedly channeled “from forces beyond,” the book’s 40 chapters and 500-plus pages featured material “concerning space travel and advice for survival, an explanation of the higher forces watching Earth and evidence of secret knowledge held by a select few on Earth”.

“People would come and bring some weird things to him. He would draw all these people that had these ideas, researchers finding things… the way he was open to all of that. I might sound kind of crazy, but he had something in him,” Allen replied when queried about The Book of Information and Sun Ra’s interest in such metaphysical matters.

Szwed wrote of how Sun Ra proceeded to give away parts of the book, “to critics, fans, and old friends, anyone he felt had the spirit to understand and use it well, handing them a few pages at random — just like he talked — broadcasting it, sowing it, he might say, so the world would know he wasn’t bullshitting”. One of these fans who received a portion of the book in the early 1990s was Phish drummer Jon Fishman. The drummer even apparently gave occasional readings from The Book of Information, such as at an aftershow party following a Phish show in 1993.

Phish guitarist Trey Anastasio would go on to recruit several members of the Sun Ra Arkestra including Marshall Allen to perform with him and Fishman on his 1996 album Surrender to the Air, an all-star free jazz side project which also yielded two concerts in New York City.

“It was good, I liked it and I then I see what other people have for ideas and put some more in with them… That’s what I do, and that’s what I like to do, with different people,” Allen says of his recollections from working on Surrender to the Air. Anastasio had lofty praise at the time for both Sun Ra’s artistic direction and Marshall Allen’s musical style in particular.

“A lot of times, I think he was the pinnacle. He was as good as it got. His values remained pure for his entire life, and there’s something to be said for that. When you listen to what he was saying, it was so right on the ball. I mean, somebody show me something he said that wasn’t 100% true,” Anastasio said of Sun Ra in an interview with the Music Monitor. “He [Ra] said, ‘People don’t understand that music is a spiritual language, and what you say musically goes straight to the throne of the Creator of the Universe. So you have to be careful about what you say.’ You get caught up in commercialism and money or something like that, and what are you doing for your spirit? You’re not doing anything, and music is a spiritual language, and it should be respected as that. Listen to Marshall Allen; he’s gotten it back to the level of pure emotion.”

Allen credits his devotion to music as the key factor in his inspiring longevity as a member of the Sun Ra Arkestra for 61 years and counting.

“I didn’t abuse myself that much, but if I had all that free time, I’d probably have been brokedown by now,” Allen says. “It was so inspiring that it kept me wanting to play…. Every day I would wake up and just start working.”

It’s not just his passion for the music itself, however, but his devotion to the higher purpose he learned from Sun Ra about using music to inspire and enlighten which has kept the Sun Ra Arkestra on its influential spiritual mission.