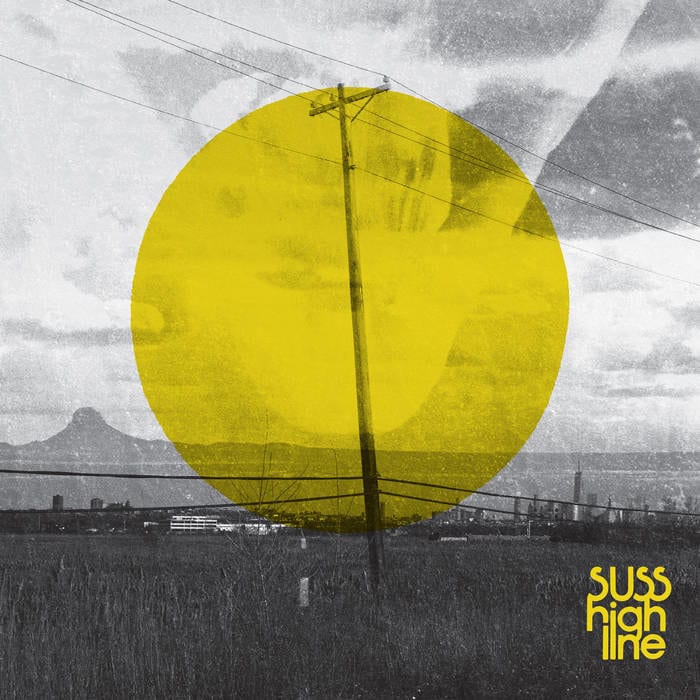 High Line is the sophomore release from ambient country outfit SUSS, and perhaps no one is more surprised at the pairing of these two seemingly disparate genres as their members.

Yet there were hints of this fusion before. SUSS co-founders Bob Holmes and Gary Leib were members of Boston’s Rubber Rodeo in the 1980s, and they imagined what might have happened had Roxy Music rounded out its compositions with touches of Patsy Cline and Hank Williams.

But with the Rodeo long dissolved and several musical generations rising and falling in subsequent decades, the world was perhaps finally ready for this new amalgamation to arrive. The high, lonesome sound of classic country and western music is evident throughout with pedal steel, mandolin, dobro, and harmonica. There’s an incredible spaciousness to the music, a vastness that speaks to the America referenced in song titles such as “Wichita”, “Laramie”, and “Laredo” (from the indelible debut, Ghost Box) or “Mojave and “Wetlands” from the equally remarkable High Line.

Recalling the sprawling, meditative moments heard on Pink Floyd sets such as Meddle and Atom Heart Mother,, as well as contemporary post-rock masters Mogwai and shoegaze outfits such as My Bloody Valentine, SUSS are nonetheless their own animal. They are never wholly of the past, present, or future but instead one part of each, culminating in a sound that transcends time and genre.

Joining Holmes and Leib are Jonathan Gregg (The Linemen), Pat Irwin (B-52s), and William Garrett (who served as an audio engineer with Rubber Rodeo). Holmes recently spoke with PopMatters about SUSS’s origins and its accelerated evolution.

How did this fusion of country and ambient music first happen?

When Gary and I were first making music together, we couldn’t figure out how we could love both Eno’s Music For Films and “Wichita Lineman”. They both gave us this high lonesome feeling. We knew that there was a connection. We weren’t exactly sure what it was. We explored it in different ways with Rubber Rodeo. But as time went by, it came back to me again that there was something more. One day, somebody asked me, “If you could do any kind of music, what would you do?” I blurted out, “Ambient country music?” Somebody said, “Imagine if Brian Eno produced Ennio Morricone. That’s what I hear in my head.” The group that was sitting with me said, “I’m in!” That was Gary, Jonathan, Pat, and William.

I said that, and we all thought we knew exactly what it could sound like, but in our heads, there were five completely different concepts of it. If you think of it as a Venn Diagram, where the five circles of influence meet, that’s what SUSS is.

[laughs] I have to give you credit. This is the first interview I’ve done where anyone’s mentioned Yes. If you knew what big fans we were … it pushes us way over into the uncool factor. But we’re all 65 years old, so we were all freshmen and sophomores in high school when that music came along. Anyone from that era that says they weren’t influenced by Steve Howe, Yes, and Steve Hackett would probably be lying to you. There was also Pink Floyd with Dark Side of the Moon. That sort of landscape-y psychedelic feel seeps into our music.

When you were growing up there were television programs such as Gunsmoke and a lot of Western imagery that wasn’t part of popular culture in subsequent decades.

It’s hard for my son to believe that the top five TV shows on the three networks that we could watch were all Westerns. They were huge. It’s what you watched on TV until The Man From U.N.C.L.E. came around. We can all distinctly remember having to make that psychological switch from cowboys to secret agents and then from secret agents to astronauts.

Coming from the East Coast, how do you capture the spirit of the West so accurately?

I’m from Ohio, Gary and Pat are from the Chicago area. Pat’s lived all across the United States. William’s from the South. We all have our own version of what high lonesome means. I grew up in the middle of cornfields, outside Columbus. Gary’s version of it is probably looking out over suburban tract houses. I think one of the reasons that Westerns were popular for a long time is that they’re about the possibilities of the American dream. That lived in all of us.

Were you surprised by the reception that Ghost Box received?

Very surprised. It was really a pet project. We didn’t think anybody would hear it outside the five of us. Then we started playing it for our wives. There’s no bigger critic than a musician’s wife. They all had the same reaction: “You guys have all played a lot of music over the years, but there’s something here that speaks to what you are right now. You should think about releasing it.” Then we found out we could get a few hundred CDs made for little money. So we just did it. The press reaction really surprised us. It seemed to resonate. Not with a small group of old geezers but with a large group of young listeners who liked ambient music, new music, they seemed to get it.

Were you already working on the material for High Line when the first record came out or is this stuff that’s turned up since then?

We’re always writing. High Line isn’t out yet but we already have eight new songs. We write individually, put together stems, themes, concepts. Sometimes a song will start with a loop or a bed or melody, and then we’ll work it up, and from there, it transforms. We might think a song is going in a certain direction, but after we’ve all worked on it, it ends up somewhere else.

Once all the tracks are recorded, William mixes it, and it can go any direction at that point. We don’t judge the final product based on whether it matches something we heard on the demo. It’s more about, “Where did this come from?” Then we sit down and say, “Now we have to play this live. Is that a pedal steel or synthesizer?” We have to go back and re-learn this music we created, which is great because then we bring a whole new essence to the live show.

Do you feel like you get to play live as much as you’d like with this band?

The fact that we get to play live at all is a huge surprise to us. We didn’t expect to become as popular as we did, but then our label said, “You should really think about playing this live.” We said, “We don’t know if we can.” The label said, “Just try it.” Not only did it work, but we really enjoyed it. Gary creates videos for the songs but also does live projections for us, which is a big part of the show.

I’m sure you’ve been part of projects in the past where there were major concerns about commercial success: How is this music going to sell? Is it going to get on the radio? Will people see the videos? Is there a sense of relief in not having that in the background?

To be honest, we’re a little jaded about the whole thing, which is what I think the record company loves about us.

It’s not that we have no expectations, but we’re realistic. Our profit and loss tables are much better than when any of us were on major labels. We’re doing things our own way, meeting our audience on our terms and their terms. It’s been very satisfying. We’re just amazed that people get it.