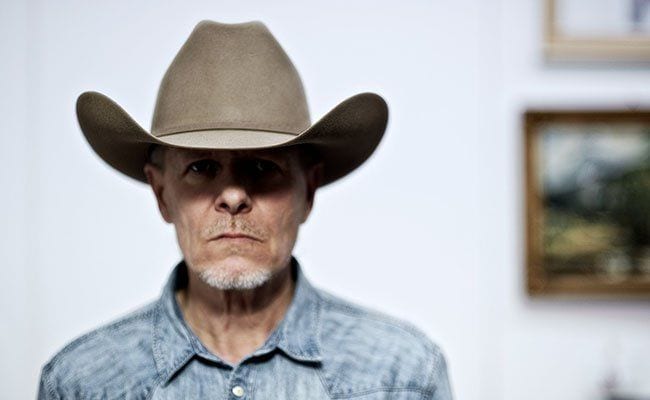 It’s hard to imagine Swans as part of any musical landscape, really, because they’re an entity unto themselves, something like drone-mantra-noise-art-metal for aspiring miscreants and sociopaths. Sometimes they’re lumped into rock, sometimes they’re thrown into indie rock, and once I even found them in the “prog” section of ye olde mom ‘n’ pop record shop, but mostly, to try and describe Swans in terms of genre is futile. Their sound is big and loud, and while the instruments are things you’d recognize, the way they use those instruments has felt for the entirety of their career like something novel, something uniquely Swans.

Swans’ 1995 album The Great Annihilator might be as close as Swans ever got to a recognizable genre, and that’s largely thanks to their collaboration with one Bill Rieflin, most recently of King Crimson, but at the time a journeyman in the industrial scene who got the call anytime a band accustomed to using drum machines decided they needed a little more punch. Between 1990 and 1995, Rieflin played for Ministry, Nine Inch Nails, Pigface, and KMFDM, and The Great Annihilator was his first (of many) albums with Swans. While he would in later albums — and particularly in the Swans renaissance of the 2010s — fit in more with the aesthetic of Swans, for one album, Swans mastermind Michael Gira actually molded the sound of his band around the types of drums that Rieflin had to that point essentially perfected.

After a brief and highly frightening intro (“In”), Rieflin immediately makes himself known on “I Am the Sun”, one of the more straightforward Swans songs ever written. Everything happens in fits and starts for a while, as Michael Gira offers proclamation after proclamation in his typical nihilist baritone: “I am insane / I crawl into your mouth / I grow like a flower / I grow a suicide,” he sings, and the listener knows very quickly that the next 65 minutes or so aren’t here to make us smile. Eventually, as Gira is offering “I love everyone” up as a mantra, Rieflin takes off. His drums suddenly find the groove that they’d found years earlier on tracks like Ministry’s “Just One Fix”, and for one of the only times in Swans’ career, they sound a little like someone else.

This is not a slight to Rieflin or Swans; “I Am the Sun” is an iconic song in Swans’ catalogue, a track that transcends the faint scent of familiarity that comes with it. Still, there are a number of tracks throughout The Great Annihilator that carry more traditional rock song structures than Swans had dealt with before, and not all of them come off as successfully as “I Am the Sun”. Single “Celebrity Lifestyle” feels a little shallow for Swans, even if lyrics like “She’s just a drug addiction / And a self-reflecting image of a narcotized mind” aren’t exactly radio fodder. The rage of “Alcohol the Seed” is shockingly tedious for a topic likely close to Gira at the time, and even the magnificent wall of sound that the title track employs isn’t quite enough to compensate for another all-too-familiar stop-start beat.

That said, at nearly 70 minutes, The Great Annihilator lives up to its title by alternating these faster, poppier (in a relative sense) songs with the drones and walls of sound the band has become synonymous with. Jarboe proves indispensable through contributions both frightening and beautiful, the harrowing “Mother/Father” exemplifying the former while the crushing lyrics of “Mother’s Milk” wouldn’t be nearly so effective were they not sung like a lullaby. “And where is the wound that shines the blue light / And who is the dead man my body made love to last night,” she sings, and we shiver. Perhaps most impressive is the patient six minutes of “Telepathy”, a bass-heavy dirge dedicated to the violence and ugliness of intimate personal connections. It’s difficult but unfailingly interesting, and rewards close listening.

The impact of The Great Annihilator is actually enhanced by the companion album included in this re-release, Michael Gira’s solo debut Drainland. Where The Great Annihilator deals with horror and failure and despair on a macro level, Drainland is intensely, uncomfortably personal. It opens on “You See Through Me”, a largely quiet and peaceful musical backdrop to an actual recorded argument between Jarboe and Gira, touching on his alcohol abuse, money, responsibility, and personal space. It is horrifying in its banality, these artists that so often come off as larger-than-life arguing in the darkest corners of domestic dissatisfaction. Both artists’ bravery in allowing this argument to be put to tape and released to the public is tremendous, as neither comes off as sympathetic; it’s an argument at a bar that you just want to walk away from. By forcing us to hear it, Gira and Jarboe force us to confront the weakness and ugliness of humanity.

Things don’t get cheerier from there. Gira once described “I See Them All Lined Up” (later revisited as “All Lined Up” on Swans’ Soundtracks for the Blind) as “some of the most vile words I ever wrote,” which is saying something. He’s not wrong, for what it’s worth, and those words’ impact is heightened by the cold industrial backdrop the song is afforded. “Low Life Form” is as pure a statement of hatred as Gira ever dared to sing, and yes, “Why I Ate My Wife” offers a vaguely orchestral, Coil-like backdrop to what is actually a surprisingly sensitive lyric (given the title) about a nearly-dead relationship.

It’s hard to hear anyone other than Jarboe as the target of Gira’s ire for most of Drainland, especially given the crushing opening track. To listen to Drainland is to be given a glimpse into the personal side of the despair and anguish of The Great Annihilator. We hear a man who hates himself as much as he hates those around him, a man for whom the light of love is long gone, extinguished, disintegrated.

The story is that we actually have Rieflin to thank for this reissue: Rieflin found the masters for Drainland and The Great Annihilator, which were recorded around the same time, and got in touch with Gira, who decided that the albums were ripe for remastering. To be sure, the original versions were marred by a slightly muddy mix, the kind you’d often get in the ’90s when artists would pile layers and layers of sound into their music (see: Mr. Bungle, California). Gira found Doug Henderson, and they got busy on the remaster. Somewhere along the way Gira decided to package the albums as a unit, and it’s the best decision he could have made; the two enhance one another, two sides of the same desperate, depressing, occasionally horrific coin. Despite its heft, The Great Annihilator feels on its own either transitional or like the slow crumbling of a once-great project; by pairing it with Drainland, the emotional rawness of Gira and Jarboe’s art comes through in full color.

To say the pairing makes the two more “enjoyable” might be a stretch, as there’s little to be “enjoyed” in either album. To say they’re easier to appreciate, however, is accurate. Between the remastering and the added context, The Great Annihilator is afforded a 20-something-years-later argument as one of the classics of Swans’ sizable discography.