Art from artist — some people have a difficult time compartmentalizing sublime works of art from their volatile and difficult creators. Just before I started reading Nick Soulsby‘s comprehensive and entertaining book Swans: Sacrifice and Transcendence: The Oral History, I came across a Twitter thread where someone wrote something to the effect of “I can never listen to Swans again after hearing how Michael Gira treated [ex-Swans member]!”

One can’t talk about the experimental no wave rock band Swans without talking about singer/guitarist Michael Gira, and Gira has proven himself to be one capricious artist. Soulsby is aware that some music fans have a hard time keeping the artist at a distance from the art in their minds, and he makes no attempt to disguise it in the book’s introduction:

“Gira’s articulacy is laced throughout the music of Swans, even as ex-bandmates and colleagues simultaneously recount how utterly awful he can be at communicating emotionally. Stories abound of Gira’s aggressive reaction to compromise, interruption, broken concentration, and so forth.” [page 8]

Soulsby is able to dig up stories about Gira’s alcohol-soaked verbal abuse slung at his ex-girlfriend/ex-Swans member Jarboe, and how the 21st century incarnation of Swans had to write him a letter asking him to stop yelling at them so much while on stage. Refreshingly, Gira doesn’t hide behind excuses when confronted with these stories, he just confirms that it’s all a part of who he was and still is. The story of Swans is one of musical integrity with only the smallest bits of compromise leaking through the cracks, painting a portrait of a man in charge who also wants his band to burst through barriers by way of sheer volume — to transcend.

When Soulsby published I Found My Friends: The Oral History of Nirvana (St. Martin’s Griffin, 2015), he already had quite a bit of competition in the niche market of oral histories that retold the stories of Seattle punk. For Sacrifice and Transcendence, he definitely has a leg up on documenting Swans: “Swans, in 1997, already deserved to be expounded on in book form. It’s surprising, to me, that this volume — in 2018 — is the first.” [page 5]. It’s a bit surprising to me as well, considering that not only does Gira and all of the musicians who have surrounded him over the past 35 years have such a story to tell, but that they have the loyal cult fanbase to match.

Whatever the cause for delay, Sacrifice and Transcendence is just as engaging a read as any other oral history of modern rock. Even if you’ve never heard a note of Swans’s music and doubt that you ever will, the pages still manage to fly by with pleasurable ease. Almost from the start, if the current punk trend was to zig, Swans had to zag. If other post-punk bands chose to zag, Swans would zag even harder — or just come up with a new move altogether. 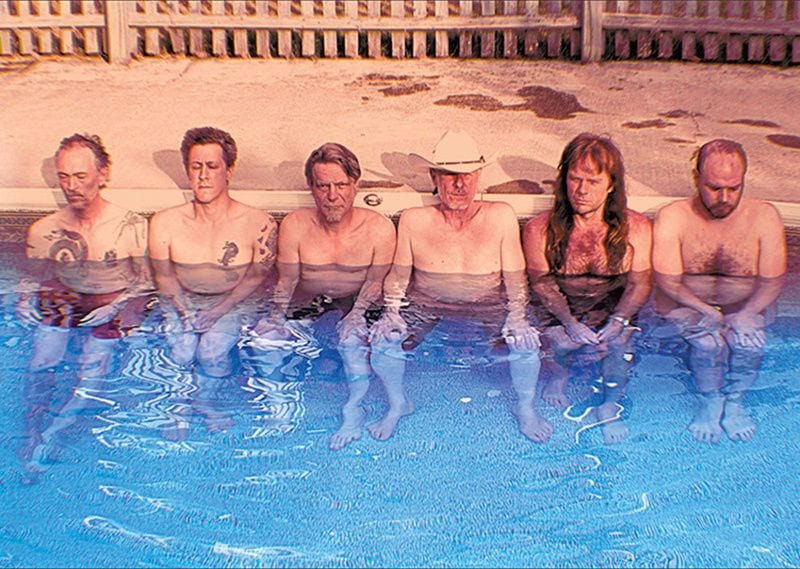 Soulsby was able to track down an impressive number of men and women who were willing to go on record about their time with Gira or as members of Swans, their scrappy predecessor Circus Mort, or their mature successor Angels of Light — 125 people, to be exact. The only notable absences are drummer Roli Mosimann, who did not wish to participate, and guitarist Sue Hanel, who mysteriously disappeared from the grid in the early ’80s. Sacrifice and Transcendence, however, starts even earlier, with Gira’s Californian childhood. It’s a short chapter, but in it Gira’s alcoholic mother manages to accidentally burn down their entire house with her cigarette. After being jailed for selling hashish, Gira decided he should stay as far away from his mother as possible.

By chapter two, Gira is throwing himself into the Los Angeles music scene, one that happened to be sharply at odds with his own tastes and ambitions in the late ’70s. After convincing a few of his musical compatriots to move to the more musically versatile land of New York City, Michael Gira forms Circus Mort. Circus Mort goes the way that so many other young bands do; big ambitions, limited funds, one recording, and an inevitable disillusionment that plants future seeds. In this case, those seeds sprout into Swans. To give you an idea of just how much of a revolving door this band truly is, 12 people had already been in and out of the band by the time they recorded their first full length album Filth (Young God Records, remastered, 2015)

From the start, Swans were able to send out a small but still detectable signal through the musical underground. Filth caught the ears of the young, idealistic Jarboe La Salle Devereaux, who came all the way from New Orleans to New York City just to meet the mysterious Gira. Next thing you know, she’s in the band and they’re a couple. The ’80s lineup of Swans more or less settled on Gira (vocals and guitar), Jarboe (vocals and keyboards), Norman Westberg (guitar), Algis Kizys (bass), and a smattering of drummers including Ted Parsons and Ronaldo Gonzalez. As Swans pushed forward throughout the decade, their audience grew while their pocketbooks, unsurprisingly, did not. Live shows were high-volume aural assaults designed to drive the patrons into euphoria. Arguments with live sound engineers were numerous, and between-show fights among the band were even more frequent. More than one road manager quit while on the job and Gira’s relationship with Jarboe overflowed with tension. There was an attempt to get one foot in the door of the big leagues of the music business with legendary bassist and producer Bill Laswell recording The Burning World, (Uni Records, 1989) but Gira was not thrilled with the outcome. In an effort to bypass labels altogether, he founded Young God Records, only to wind up in debt yet again.

Gira’s next move comes across as a more muted affair in comparison to the bombast that was Swans. Angels of Light, an attempt to move on from the Swans name, enjoyed a similar arrangement where Michael Gira sat in the center and led a varying cast of characters along to realize his ever-evolving aesthetics. On the one hand, the activity of Angels of Light brought about new acts to find a label home on Young God Records like Akron/Family and The Body Lovers/The Body Haters. On the other hand, Gira himself dismisses it as “just another fucking failure.” [page 261] 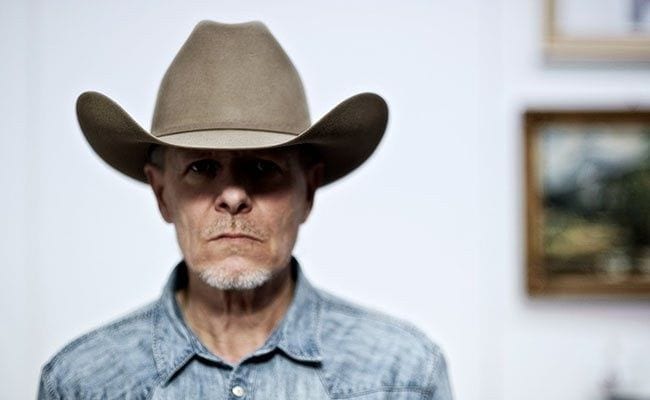 The Swans’ “mach 2”, if you will, was successful but not without its bumps. When Gira first rejoined forces with guitarists Westberg and Christoph Hahn, drummer Phil Puleo and newcomers Thor Harris and Christopher Pravdica, they hit the ground running by recording a series of albums that did their damnedest to beat the living daylights out of any past Swans release. Most of these albums were double albums, demonstrating that time had not dulled their approach. Swans’s shows were enthusiastically well-received, seeing as how their history and reputation did all of the public relations heavy lifting for them. Gira had also quit drinking by this time, changing the way that he socially interacted with his band and friends. After so many high-decibel shows, his hearing is showing signs of severe wear and resorted to shouting at bandmates mid-song. After submitting a letter to their ringmaster saying along the lines of “Quit yelling at us or we quit!” Gira then developed a series of gestures to communicate his musical inclinations: a waggling of the tongue for more staccato, a stomping of the foot for more bass, and so on.

Swans and Gira took their album covers seriously. Some of them appear to be generic copies of one another in terms of color and graphics while some of them are genuinely striking yet cryptic photographs and paintings. The individuals who captured these images are also interviewed, giving another dimension to the creative process that seems to be a great deal less tense than the music making. Deryk Thomas, the artist behind the covers of White Light from the Mouth of Infinity (Young God, 2015) and Love of Life (ibid), appeared to enjoy a productive and slightly demanding relationship with Gira. Should you not have access to the internet while reading Swans: Sacrifice and Transcendence, there are eight glossy pages right in the middle giving you pictures of the band’s various line-ups and album covers — including those EPs and live albums that were printed in limited quantities.

It’s impossible to detect an invisible hand guiding the narrative in Swans: Sacrifice and Transcendence. There are so many warts and hiccups and bumps committed to the page from Swans’ story that no one could accuse Soulsby of sugarcoating anything. Like any good oral history, the book moves forward as a unifying story, regardless of the quantity and quality of contributing voices. You get to hear from Thurston Moore, Paul Kendall, Lydia Lunch, Martin Atkins, and Bill Rieflin just to name a few, but you hardly get blinded by any star-studded glare. They’re here to tell a rock ‘n’ roll story full of principled successes, numerous failures, painful sacrifices, and yes, thorough transcendence. 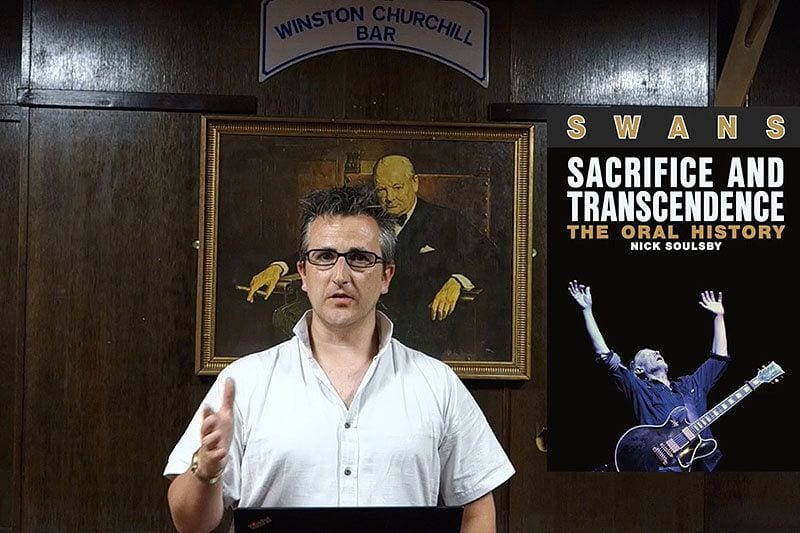