Lynn Shelton‘s Sword of Trust is in many ways a quintessentially Southern movie. But that sensibility is primarily expressed in the laconic humor and slippery slides from bonhomie to violence. Shelton expends little effort on a cinematic sense of place, aside from some melancholic insets of faded storefronts around the Birmingham, Alabama pawn shop where the action takes place. That is, except for the obsession with the Civil War, or as some characters might characterize it, “Thuh Wah of Nawthun Aggression.”

Taking another deftly mannered though still unassuming step toward leading man status, Marc Maron plays Mel, the pawn shop’s diffident owner. He spends his days picking over barely-worth-pricing detritus and grumbling about his employee Nathaniel (the amiably daft Jon Bass), who’s more occupied with conspiracy videos than helping the few customers who amble into their dusty emporium. That is, until a couple brings in a sword that could change everything.

Cynthia (Jillian Bell) has returned home with her girlfriend Mary (Michaela Watkins) to handle her late grandfather’s effects. It’s a disappointment, as the house Cynthia was hoping to get turns out to be in hock to the bank. What she is left is a long, Alzheimer’s-speckled ramble of a letter, as well as what looks like a Civil War-era Union sword and some authenticating documents that raise more questions than answers. By the time the couple shows up in Mel’s shop, they’re buzzing with excitement, confusion, and greed, as Cynthia’s grandfather believed the sword to have been surrendered to General Lee at the end of the Civil War. Meaning (to him) that the South actually won.

From that point, Sword of Trust pivots from mildly funny Jonathan Demme-esque small-town humor to a rangier, weirder, more off-the-wall satire about invented pasts and unspeakable truths. Once the foursome discovers an online community of Civil War Truthers who call themselves, with classic Internet issue-monger pretentiousness, “Invictusians”, they decide to see how much money they can get for the thing. That quickly brings the sub-Infowars anti-Semitic “rednecks” out of the woodwork, and soon all four find themselves in the back of a panel van being driven out to the middle of the beyond to either get rich or end up dead. 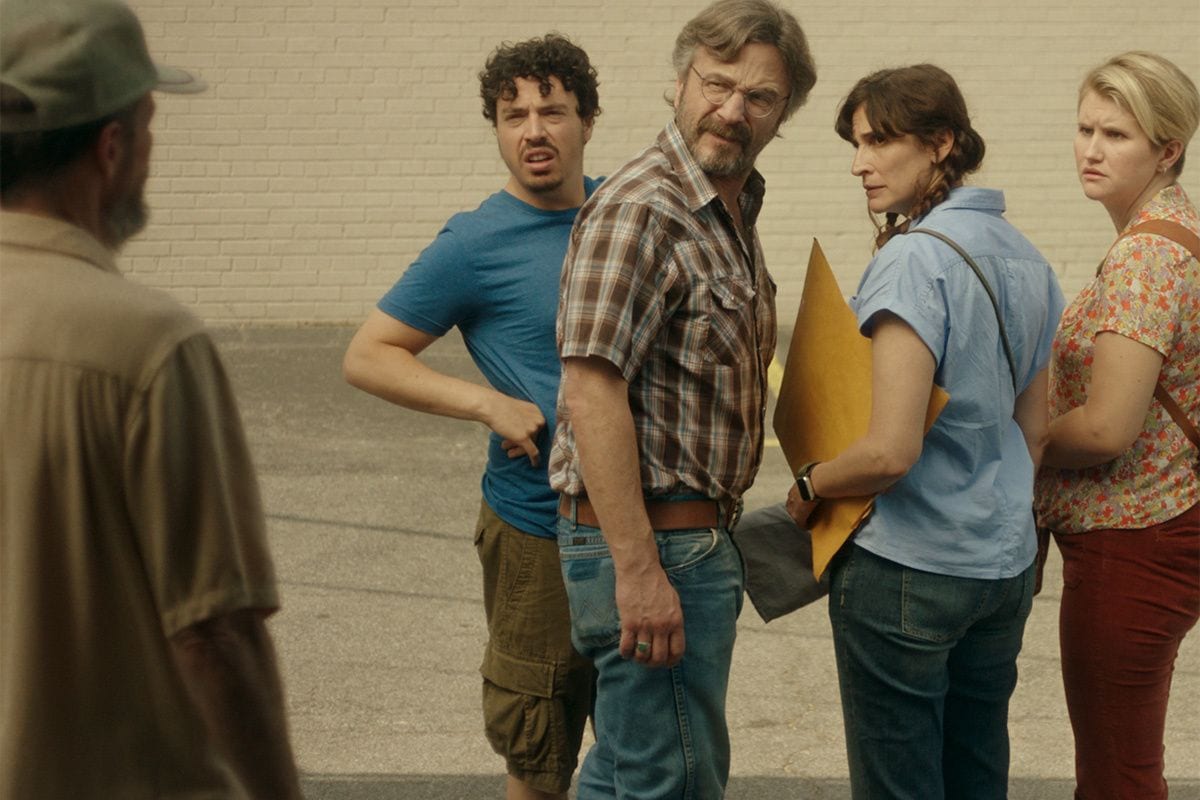 Shelton, who also appears in a small role as Mel’s addict ex-girlfriend Deirdre, structures much of her story as a kind of ramshackle treasure hunt. She also uses the gently snarking humor and verbal aesthetic of a mumblecore screwball comedy shorn of potential romantic entanglements. (Mel’s dyspepsia aligns well with Mary’s cynicism, while Nathaniel’s doofiness draws him towards Cynthia’s innocent cluelessness, but these friendships and alliances have no romantic future, despite what Nathaniel might think.)

What makes Sword of Trust as enjoyable as it is has little to do with the cast’s frequently funny sarcastic sniping. Shelton happily breaks dramatic conventions here that would sink a lesser movie. One is a flouting of the Chekov rule—the one about a gun needing to be on the wall in the first act for it to go off in the third—that’s so flagrant and yet off-the-cuff (the day being saved by some characters who are suddenly and almost magically equipped with weaponry and military training) it works as a joke in and of itself.

More notable is her smashing the dictum about not mashing genres together without explaining why or leaving room for transition. In the middle of her goofy indie laughter, Shelton places Mel front and center to deliver a long soliloquy about his druggie past and never-ending semi-relationship with Deirdre. This should have been a fatal misstep, weighing down a light piece with a heaviness it failed to own. But Maron’s stirring rendering of the speech, delivered in a halting yet unfussy manner cloaked in a dense self-laceration that’s nevertheless free of self-pity, overflows with such a resonant sadness that it almost doesn’t matter what else follows. Portrayed up to that point as the story’s sardonic cynic, after that performance Mel’s standoffishness feels far more earned and understandable. He has a wary pride about being able to hold on to his sobriety, even while Deirdre keeps mooching around looking for handouts, but he remains nervous about how long it can last.

It’s a beautiful, honest, heartbreaking moment of truth in a story that until then seemed to be only playing the idea of challenged reality for laughs (“Antiques Roadshow for racists” being one of the better one-liners). Afterwards, though, it’s more clear about what Shelton is getting at. Mel has faced his mistakes, and lives with the “persistent heartache”. But the Confederate hollow-earth types running around the movie have not exactly come to grips with their past.