After WWII in Japan, it took several years for the country to bounce back from the devastation of both lives and infrastructure. While much of our cultural memory relates to the destruction produced by the atomic bombings of Hiroshima and Nagasaki, Tokyo may have seen the largest casualty count from one event of the war. On the night of 9 March 1945, US planes began dropping napalm and petroleum/white phosphorus bombs on the city. Estimates of casualties range between 80,000 and 100,000 people, around one million people were left homeless, and survivors injured by the attacks number over 100,000.

During the recovery period, working-class homes and red light districts shared the same geography. In one of these working class areas of Tokyo an underclass coexisted where mangaka Tadao Tsuge (b. 1941) grew up. People lived on the fringe of society; men struggled to find legitimate work and many women found themselves forced to do sex work just to get by. As a child, Tsuge watched the lingering effects of the war throughout the recovery. As a young man, he witnessed damaged people sell their blood in a blood bank where he worked.

Readers unfamiliar with Japanese manga history might be confused by the term “alternative” attached to Tsuge’s work. It follows the tradition of gekiga, dramatic comics written for adults and employing a cinematic style. While Tsuge’s work is experimental, it offers a noir-esque view of a Japan shaped by an underclass wholly separated from the white collar, salaryman middle that forms much of what western readers consider the norm in late 20th century Tokyo.

Tsuge states that the world is based on the imagination-shaped landscape he witnessed as a child. His male characters tend to be shaped by the lack of normalcy following the war and all tend to be broken even as they struggle to hold together whatever worldview they can comprehend. Tsuge’s vision of occupied Japan is populated by people suffering both the economic and psychological fallout of the war.

Translator and scholar Ryan Holmberg describes two of the reappearing characters in the collection, Sabu and Aogishi, as “the two paradigms of Japanese masculinity that Tadao kept returning to while drawing for manga magazines Garo and Yagyō in the ’60s and ’70s. As different as they are—one an essay in machismo, the other in impotence—they are two sides of the same coin” (318).

Keisei Sabu, trained as a kamikaze, roams the streets taking on thugs as he protects prostitutes and shop owners. Even though he seems to embody the actions of a hero, he’s far from the prototypes of both the hero and antihero. Even while his presence seems grounded in the community, he exists only to fight, his purpose seems little more than find a fight and give or take a beating for nothing.

Mr. Aogishi works in a business supervising a small group of people. While he seems to be a pushover and ineffectual leader, a seriousness of intent percolates under his flaccid personality. Aogishi allows himself to be dictated by the hierarchy in his world, unable to stand up for his underlings and will not challenge those above him. Readers see small glimpses of how his military service left residual trauma that stands in strong opposition to his meager demeanor.

Beyond those characters, readers meet others who live on the fringes in dilapidated apartments or in temporary cities built by vagrants and the most disaffected. One notable feature of these works is the absence of post-war progress or vision of the future. Tsuge creates an eternal present devoid of any benefits of an improving economy or possibility of climbing out of a landscape of ruin and defeat. 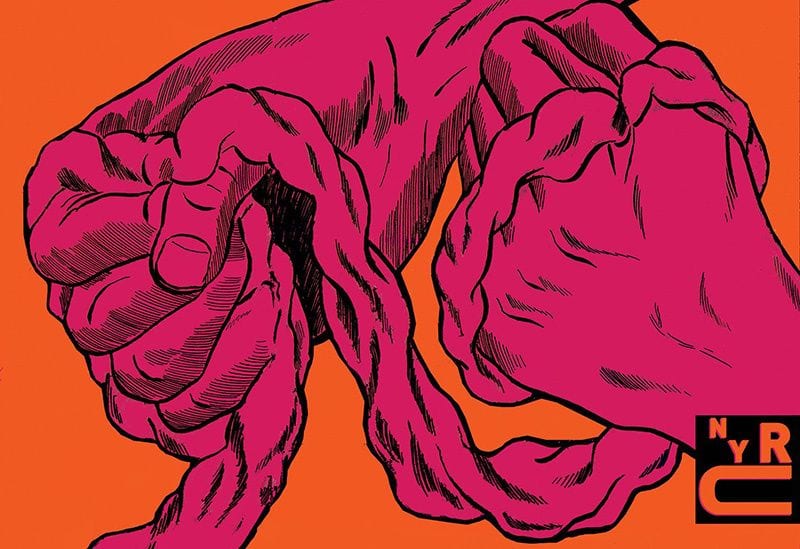 Slum Wolf is the most recent entry in the underrepresented English translation of experimental comics from Japan. Many of these stories were originally published in Garo between 1969 and 1976. While “alternative” is often added to these types of work, the tradition goes back to the ’50s with sequential art produced for an older, male audience. The art style differs from mainstream comics with characters tending to be drawn to focus more on grotesque and elongated faces. Line work and crosshatching populates the backgrounds, giving energy to the darkness and shadows. Even when figures are shown in open areas, they are surrounded by a claustrophobic isolation. Tsuge’s imagination situates his characters in a cinematic universe, always existing within a childlike understanding that the world ceases to exist outside of the circle of their reach.

As a collection of stories, Slum Wolf presents a fully realized view of the persistence of defeat and occupation on the Japanese culture. As readers follow the disaffected and maladjusted characters through their worlds, Tsuge consistently prompts the reader to consider the feelings and circumstances by invoking the reader’s empathy and fears.

At their best, Tsuge’s stories offer readers understanding, or allows them to feel a truth without stooping to dogmatic representation. He sustains a poetic development, making his characters more human as he forces them to realize their existence is limited to the labels they place on themselves. While Tsuge critiques both the Japanese culture and the American occupation, he avoids blame while exploring the disaffection spawned in turmoil’s wake.