Once Upon a Time...in Hollywood
Quentin Tarantino
Sony

You might have thought Quentin Tarantino would be the last filmmaker to indulge in the lamentable trend of digitally inserting actors into scenes they were not there for. He is not an imitator like J.J. Abrams, but more dedicated cinephilic artist, with both an original voice and a reverence for the craft and its history. You expect nods to this movie or that in Tarantino’s work, but not some Peter Cushing-esque bit of digital grave-robbing. Nevertheless, here Tarantino is in his ninth movie, Once Upon a Time…in Hollywood, slipping Leonardo DiCaprio into a scene from John Sturges’s 1963 film, The Great Escape. Once that line has been crossed for Tarantino, who had previously restricted himself to homage, what’s next? Uma Thurman slotted into Enter the Dragon? Maybe Bradley Cooper into Where Eagles Dare?

A lot of Once Upon a Time…in Hollywood is spent in dreamland. In large part that is due to its main character, Rick Dalton (Leonardo DiCaprio). Once the star of a 1950’s TV Western, in the changed entertainment landscape of 1969, he’s now scratching out work playing heavies in guest slots on other shows. He’s riddled with fear and suffers the nervous sweats of the insecure drunk who’s worried that maybe he never knew what he was doing anyway, and that somebody is about to find out. At one point, another actor painfully asks Dalton about all the roles he had been up for and didn’t get. Like Steve McQueen’s part in The Great Escape. Dalton tries to change the subject but can’t help but put himself in the movie. His whole life is one big Might Have Been.

That may as well have been the subtitle of the movie, which Tarantino has filled with woulda-coulda-shoulda characters and situations. At Dalton’s side is Cliff Booth (Brad Pitt), war hero, street fighter, and possible wife-murderer. In busier days Cliff was Rick’s stunt double but now makes a living as his driver and gopher. Living next door to Rick on Cielo Drive is Sharon Tate (Margot Robbie), the gleaming ray-of-sunshine starlet with a career just starting to get some juice, thanks in part to her husband Roman Polanski. Everybody has stars in their eyes.

Added to all these characters’ yearning is the sun-dappled glory that is the view of Hollywood right at that moment when the studio system was imploding and celebrities were tumbling into quasi-hippiedom. Mama Cass pops up at a Playboy Mansion party, Paul Revere & the Raiders have a prime slot on the turntable, and Charles Manson’s girls dumpster-dive and hitch for rides like advance scouts for some Joan Didion-scripted apocalypse. 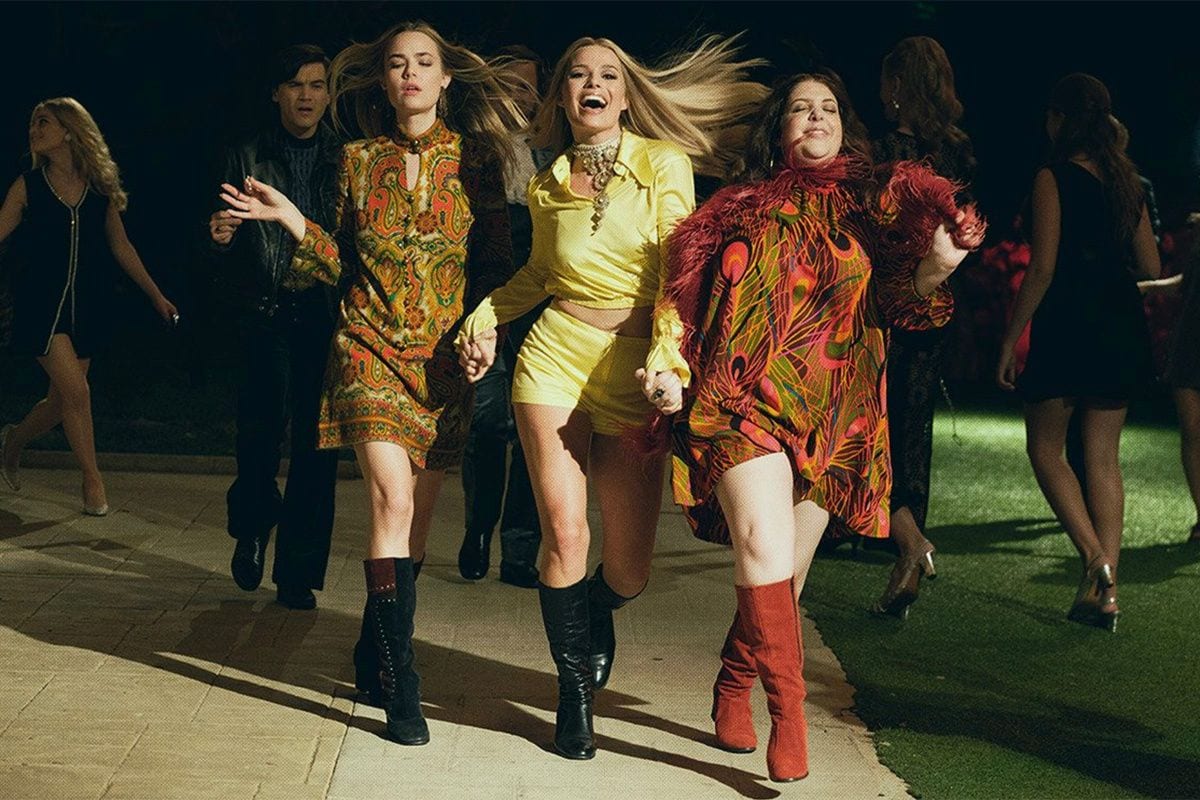 There are really two movies here. When Tarantino is letting each of them spiel out on their own, he has something quite special. The primary storyline tracks Rick’s attempts to get some kind of career going, potentially in some spaghetti Westerns, courtesy of an agent played by a refreshingly goony Al Pacino. But Tarantino follows that story in fairly lackadaisical fashion, burning long stretches of runtime on atmospheric shots of people zooming around Los Angeles’s still-empty freeways while the time’s gloriously rich pop songs unspool from their car radios and occasionally they stop to slug down whiskey sours at The Musso & Frank Grill. But for Rick’s angst, it’s a glorious presentation.

Between all the loving homages to the period’s junky serial TV (particularly F.B.I., the NCIS of its day, watched everywhere from Rick’s mini-mansion to Manson’s hideout at Spahn’s Movie Ranch), Tarantino slips a thoughtful look at an actor’s collapsing confidence in the face of changing tastes. In one scene, Rick smashes his trailer to hell in A tearful fury after stuttering through a crucial scene. In another, he gets his old confidence back after a nearly-too-cute conversation with his scene partner (Julia Butters), a precocious elementary school girl who isn’t even in junior high yet but has already gone Method.

Tarantino neatly pairs Rick’s near-collapse with a similarly resonant moment when Tate goes into a theater to watch a movie she had starred in with a real audience. The movie might be some schlock bit of Dean Martin nonsense, but each little-kid smile that beams across her face whenever the audience laughs at one of her on-screen pratfalls is like watching the sun rise.

Here and there, though, Tarantino starts to lose the thread. There are times when he seems to be throwing just one more thing in an already slightly-overlong movie. In large part, the movie’s loosely gathered scenes don’t need to tightly cohere—one of Tarantino’s greatest gifts has been to slot in an utterly beside-the-point soliloquy and make you not care that it doesn’t belong. 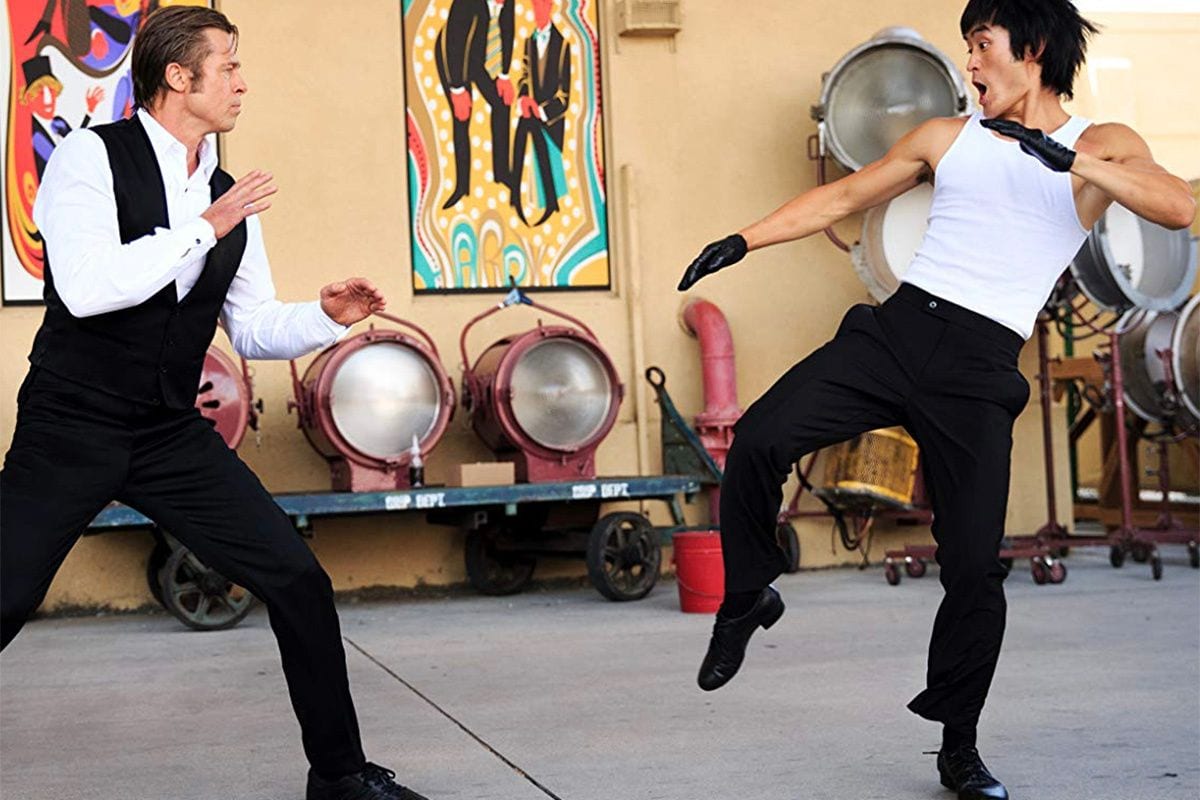 Take the scene with Bruce Lee (Mike Moh). On its own, this is a canny bit of old-Hollywood reconstruction, with Lee presented as a nonstop shit-talker whom Cliff takes down a couple pegs in a fight after Lee claims he could beat Cassius Clay. Moh is phenomenal, all peacock edge and loving the sound of his voice. But there’s little reason to include the scene except to mock Lee. That, or as a clumsy attempt to support a climactic scene where Cliff has more reasons to use his fists.

It doesn’t ruin anything to acknowledge that the end of Once Upon a Time…in Hollywood indulges in some alternate-historical storytelling. This will not be much of a surprise, as any time Tarantino has gotten even close to history (Inglourious Basterds and to a lesser degree, Django Unchained) he has gone his own way. Once again, we have a spectacularly bloody climax that takes an expected tragic turn, and turns it on its head. Only in this case, the twisteroo seems less purposeful and meaningful than a clever out and a way to use a brain-smashing screamer of a fight scene to snap close a previously open-ended narrative that had sprawled like the Southland’s highway system.

The negative way to read this is to see Once Upon a Time…in Hollywood as Tarantino’s refusal to face history. He doesn’t like the way the real story ended, so he made up his own, and did so in a way that avoids the real terror that Manson’s crew wreaked that August night in 1969. A more positive take is that he’s attempting to plumb the true potential of art to transform lives — when not ruining them. Maybe this is not an attempt to change the world, but to allow the dead to live again and for everybody watching to dream about What Might Have Been. Just a little.