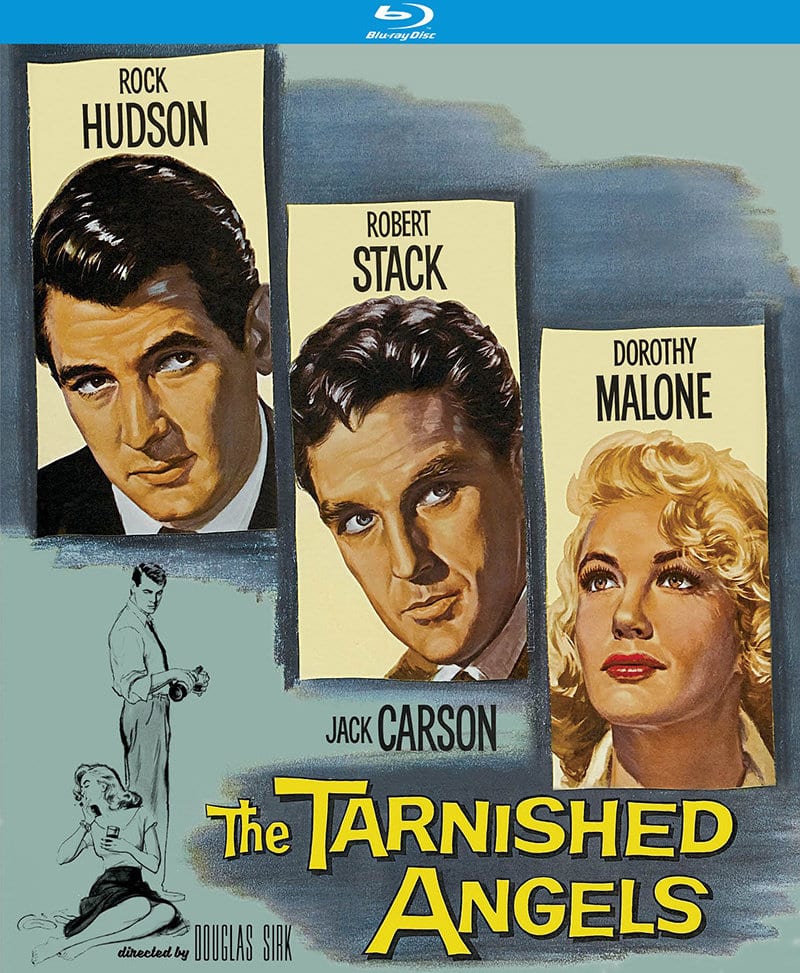 Although Douglas Sirk is among the most celebrated filmmakers of studio-era Hollywood, he remains oddly underserved on disc, such that major films still haven’t seen the light of DVD or Blu-ray in Region 1. A case in point is The Tarnished Angels (1957), which at long last arrives on disc thanks to Kino Lorber. It’s not only among Sirk’s best films, it’s among the best films of its entire main cast: Rock Hudson, Robert Stack and Dorothy Malone.

That trio had just starred in a huge hit for Sirk, Written on the Wind (1956), produced by Albert Zugsmith and written by George Zuckerman. The Tarnished Angels serves as Old Home Week, reuniting them all, along with most of the crew, for an adaptation of William Faulkner’s 1935 novel Pylon, about Depression-era stunt-flyers who risk their necks in tawdry barnstorming airshows. The same milieu would be revisited in John Frankenheimer’s The Gypsy Moths (1969) and George Roy Hill’s The Great Waldo Pepper (1975). Although these films are good and benefit from more spectacular photography and stunts, they’re not better than Sirk’s evocation.

Let’s dispose quickly of the story. Roger Shumann (Stack) is a WWI flying ace, a hero of the Lafayette Escadrille – the famous corps to which William Wellman belonged and about which he made films, especially Lafayette Escadrille (1958) with Tab Hunter. Roger is a daredevil flyer who races around huge pylons, which he calls “fingers of death”. Well, sometimes a pylon is just a pylon. In a way, Roger is the film’s highly flawed and perhaps unforgivable hero, although we see less of him than we do the other characters.

As explained by Burke Devlin (Hudson), a starstruck and alcoholic reporter for the New Orleans’ Times-Picayune, Shumann and his crew aren’t real people but otherworldly creatures without blood in their veins. The way he speaks of their “gypsy” lives, you’d think he wants to run away and join their circus. He sees them as spellbound by the machine and the dance with death, an idea literalized by a dementedly laughing Mardi Gras partier in a skull mask who bursts into a scene in one of Sirk’s typical non-subtle gestures. Phony, distorted and grotesque faces abound in the film, whether masked or warped in funhouse mirrors.

Shumann’s wife LaVerne (Malone), whose parachute act is a cheap excuse to encourage the crowd to gawp at her legs under her billowing skirt, suffers because her cold husband only cares about flying and takes her for granted when not actively humiliating her. He actually declares that he needs an airplane “like an alcoholic needs a drink”. Mechanic Jiggs (Jack Carson) moons over both of them.

Really, everyone in the picture falls for LaVerne, including Devlin and rich vulgar airplane owner and businessman Matt Ord (Robert Middleton). As historian Imogen Sara Smith observes in her commentary, most of them are equally besotted with Roger, who abuses their idolatry because of his emotional bankruptcy, which might be a death wish or possibly what we’d now call a symptom of PTSD.

The movie’s not really about its story but the fug of yearning and despair wafting off every character, what Smith calls the movie’s “aching melancholy and desolate beauty.” The melancholy touches Roger and LaVerne’s neglected little boy, played by Chris Olsen, who’s most famous as the kidnapped son of Doris Day and James Stewart in Alfred Hitchcock’s The Man Who Knew Too Much (1956) and the boy whose father wants to kill him in Nicholas Ray’s Bigger Than Life (1956). Talk about trauma. He’s called upon to enact a very distressing scene here, in which he serves as a kind of emotional exclamation point amid the rapid cutting and Sirkian panache of an action setpiece.

It’s the movie’s second such traumatic action-piece, the first having focused on a surly rival pilot played by Troy Donahue. Sirk would cast him again unsympathetically in a minor role in Imitation of Life (1959). This was an actor being groomed as the next teen heartthrob, which he became, so we have yet another example of Sirk’s tendency to use actors against their obvious typecasting.

Hudson, for another example, plays a disheveled and nervous character. He’s capable of a reporter’s purple eloquence — phoniness is habitually underlined in a Sirk picture — but he spends most of the movie tentative and hesitant, especially around LaVerne. Malone, an actress who often rolls her eyes and licks her lips when “acting”, is here restrained admirably as a woman painfully aware of her lack of pride.

In a very nice touch, Devlin responds to LaVerne’s self-hatred, when projected against him, by adopting a flippant tone to puncture her melodrama. This looks forward to the moment in Imitation of Life when a daughter (Sandra Dee) cuts off her mother (Lana Turner) with “Oh, Mother, stop acting!”

Stack, often as upright as a tree and just as wooden, is again used by Sirk as a flawed, hollow man of serious weakness, no matter his physical heroism. Smith makes a canny association with his excellent performance as a man inexplicably drawn to masculine danger in Budd Boetticher’s The Bullfighter and the Lady (1951). Even Carson, known for his brash persona in other films, plays against type as awkward and pathetic.

All traces of “camp” overacting, sometimes encouraged in Sirk’s soapers, have been rigorously pared back to anchor a sour story that, as Smith reminds us, Rainer Werner Fassbinder called “nothing but a series of defeats”. No wonder films like this encouraged Fassbinder to make films schematized by cross-purposed characters who can never get what they want.

The daredevil stunt segments are very impressive, even when occasionally using process photography. The suspenseful sequences pack a punch, perhaps moreso when we learn that one pilot really did get killed during filming.

Smith reports that when Zuckerman told Sirk that he’d wanted to adapt Faulkner’s book since the 1930s, Sirk was shocked by the coincidence because he’d had the same desire. He used the enormous success of Written on the Wind (1956) and the goodwill it generated for him at Universal to convince Zugsmith this should be their next project.

The resulting film, The Tarnished Angels, is a paradox. It’s highly Sirkian, yet it hardly resembles the glossy Technicolor soaps that made his reputation and were generating so much box office. Those escapist films about the miserable problems of rich people in lavishly appointed surroundings make a virtue of their artifice so that the phoniness of characters and context is constantly hitting you in the eye as the heavy-breathing scores bathe your ears.

This over-the-topness is part of what some critics mean by Sirk’s “irony”, although it should be stressed that his characters also genuinely suffer in their gilded traps and that Sirk never means us to think their anguish should be taken lightly. You won’t find more sincere anguish than in his next movie, A Time to Love and a Time to Die (1958, still not on disc), or more profound tearjerking than Imitation of Life. He’s placing the characters’ emotions within a carefully analyzed perspective that includes layers of social observation and visual framing devices, but he’s always getting at something he takes seriously in their loss and confusion, no matter how far-fetched the story.

The Tarnished Angels feels deglamorized by the standards of late Sirk, partly because this production is in black and white. But oh, what lovely black and white. Photographer Irving Glassberg rises to Sirk’s occasion with richly designed contrasts, complex light patterns, Sirk’s typical love of mirrors and windows, and lengthy elaborate shots that glide around the sets or sweep across the Cinemascope space. As a purely physical spectacle, the movie is worth anyone’s time. Sirk believed, correctly, that style was substance, or rather that style was philosophy, and he conveys emotions through this mise-en-scène as substantially as through acting, dialogue or plot.

A perfect example is the scene in which LaVerne is descending the longest, most luxuriantly gothic staircase in cinema to her moral damnation, only to be sent back up the stairs by Devlin. You almost don’t need dialogue, or even actors, as long as you have that staircase. The scene is punctuated by cutaways to a dour, bedraggled landlord who emerges to glower at the couple, judging them from his tatty hole beside peeling wallpaper. In fact, the movie is jammed with spectators and observers, whether in the gaping airshow audiences or the delirious Mardi Gras celebrants in grotesque masks, all implicitly commenting on the characters while embodying the mad world in which they must suffer.

By the way, the name Burke Devlin is interesting. The novel’s journalist wasn’t named, but here he gets “Burke”, which is like “Rock”, and a surname implying the devil, bedevilment, or daredevils. At one point, LaVerne accuses him of being a tempter, but he comes across as a sodden gentleman bedeviled by his own temptations and weaknesses, which include booze and envy of what the barnstormers have, little though it is. He’s frustrated by the fact that he never became Richard Harding Davis (his own WWI idol) and he encourages LaVerne to become Willa Cather’s My Antonia. Another curious fact is that Burke Devlin was a character in the gothic soap Dark Shadows (1966-71); it hardly seems such a name could have been invented twice.

Universal advertised the movie by calling attention to Faulkner’s novel as “the book they said could never be filmed”, and in some ways it still wasn’t. The book’s central menage, in which LaVerne doesn’t know which of two men is her child’s father, is cleaned up into a false rumor for the sake of the withering Production Code, as it’s stressed that she’s never had sex with the other man. This is such a major concession that she’s allowed to get away with being pregnant before marriage, especially since she marries right away.

Faulkner was on record as liking the picture as much as he ever did the films of his books, even though critics and audiences didn’t respond so well. The movie’s reputation has only grown. Leonard Maltin’s review gives it three and a half stars, while David Thomson’s Have You Seen…?: A Personal Introduction to 1,000 Films (Knopf, 2008) calls it “quite simply, the best attempt at Faulkner ever made by the movies”. (Turner Classic Movies Presents Leonard Maltin’s Classic Movie Guide: From the Silent Era Through 1965: Third Edition, Plume, 2015) I’d make cases for Clarence Brown’s Intruder in the Dust (1949) and Joseph Anthony and Horton Foote’s Tomorrow (1972), but I’ll leave that for another time.

This Blu-ray presentation looks gorgeous. Smith’s excellent commentary and the trailer are the only relevant extras. Let us hope, as ever, that more Sirks are on the way, for style has never gone out of style.