To fill the heeled, sequined shoes of Elton John in front of a worldwide audience is about as unenviable a task as one could dream up. The man is eminently popular and beloved, a music icon who has touched the hearts of millions, across several generations, with his one-in-a-million voice. With equal measures of audacity and humility, Taron Egerton plays the legendary musician in Rocketman, the new biopic directed by Dexter Fletcher.

“It’s been a more intense level of interest in me than I’ve been used to,” says Egerton of dealing with the pressure of playing John in the just-released biopic. “I’m thirty this year. I’m kind of ready for it, I think. I’m dealing with it now far better than I would have five years ago.”

Not a sugarcoated hagiography nor an alcohol-soaked cautionary tale, Rocketman uses key selections from John and creative partner Bernie Taupin‘s songbook to tell the singer’s life story, from childhood up until he got sober in the ’90s. Suffice it to say, the film doesn’t shy away from the darkness that permeated John’s life for so many years.

“We didn’t want to get lost in it,” says Egerton of the film’s unflinching examination of John’s bouts with addiction and depression. “[The movie] is still intended to be joyous and uplifting. I think Elton finds himself quite amusing. He will talk about a particular bit of bad behavior, and he kind of laughs at himself. He knows that it’s absurd. Something of that lack of preciousness has found its way into our film.” 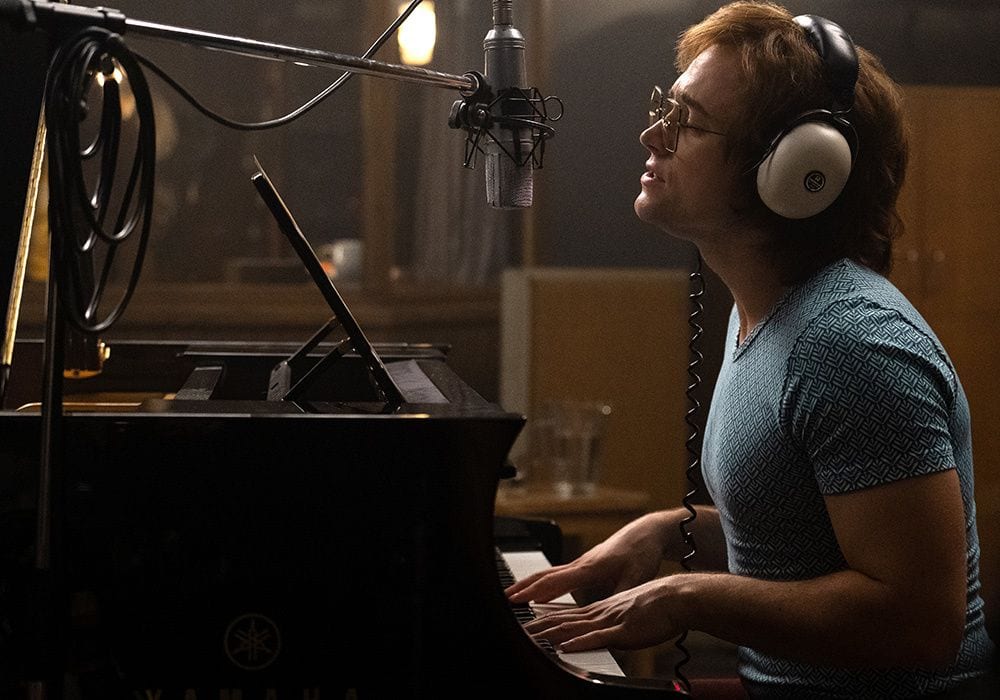 Irreverence is indeed a running theme throughout Rocketman, with Egerton’s Elton at once experiencing artistic glory and personal torment, all the while radiating a dry wit and cheeky sense of humor that should be familiar to fans who’ve followed his career. His proclivity for fantastical storytelling is represented cinematically as well, as in a scene set at LA’s famous Troubadour nightclub, in which Egerton’s Elton and the audience begin to literally take flight during an electric performance of “Crocodile Rock”.

“It’s not that these people really floated off the ground,” Egerton says. “In the film, we see the story of Elton’s life through Elton’s eyes. He recounts his life from a therapy room. I think the really clever thing about what Lee (Hall), the screenwriter, and Dexter have done is that it allows you to bend and distort. It becomes larger than life and cinematic and spectacular. That is at the heart of who Elton John is. He created this persona. This otherworldly, elevated thing. The film needed that psychedelic, Technicolor thing to do him justice.”

When asked which songs were the most fun to sing, Egerton leaned toward two of John’s all-time classics. “I do ‘Bennie and the Jets’ in the film, and it’s a wonderfully expressive song to sing,” says Egerton. “There’s something very muscular and demanding about that song… but I found it very cathartic. “Your Song” was done completely live on set. I really loved that. It just felt like a great honor and privilege to be depicting the writing of that song and to be singing it myself. There’s a chance that, for some people, that will be their gateway into his music. That’s a huge privilege.”

Fletcher and his team could have made Egerton’s voice sound like a carbon copy of John’s using sound-alikes and clever sound editing. But the team chose to let the young actor use his own voice to put forth a unique, lived-in interpretation of John’s gift onscreen. 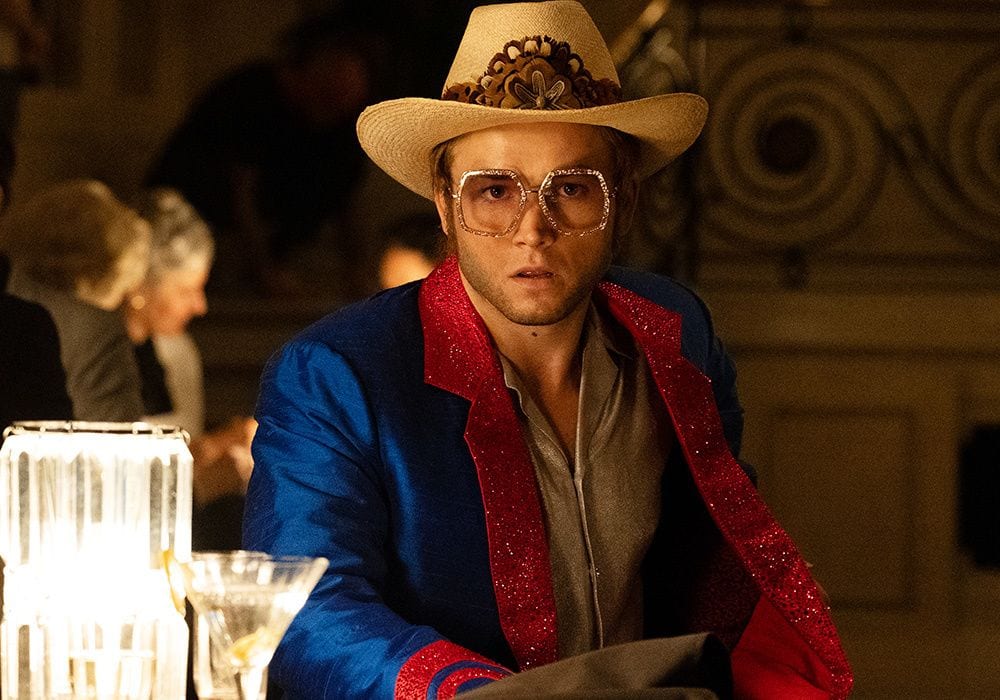 “We’re asking the audience to take a sort of imaginary leap, you know?” Egerton says of the decision to use his own voice. “We could have made me sound exactly like him. There are all sorts of tricks you can employ. That’s completely valid because there’s something thrilling about hearing something exactly the way it was. But the idea for us was to create our own version of the imaginative world of Elton John. That slightly takes the pressure off of me to sound exactly like him because it’s our version of him.

“The hope is that, in the first five to ten minutes of the movie, you invest in me as Elton and you get lost in the story. And I think there’s something thrilling about knowing that the actor you’re watching is really singing.”

Watching John’s life story play out onscreen is something of a roller coaster ride, with his highest of highs portrayed spectacularly and in stylized fashion, and his lowest of lows shot like a suffocating, disorienting haze of a nightmare. One of the darker corners of John’s life the film explores is his struggle to find true love during his rise to superstardom, a subject that acts as one of the film’s primary focuses. 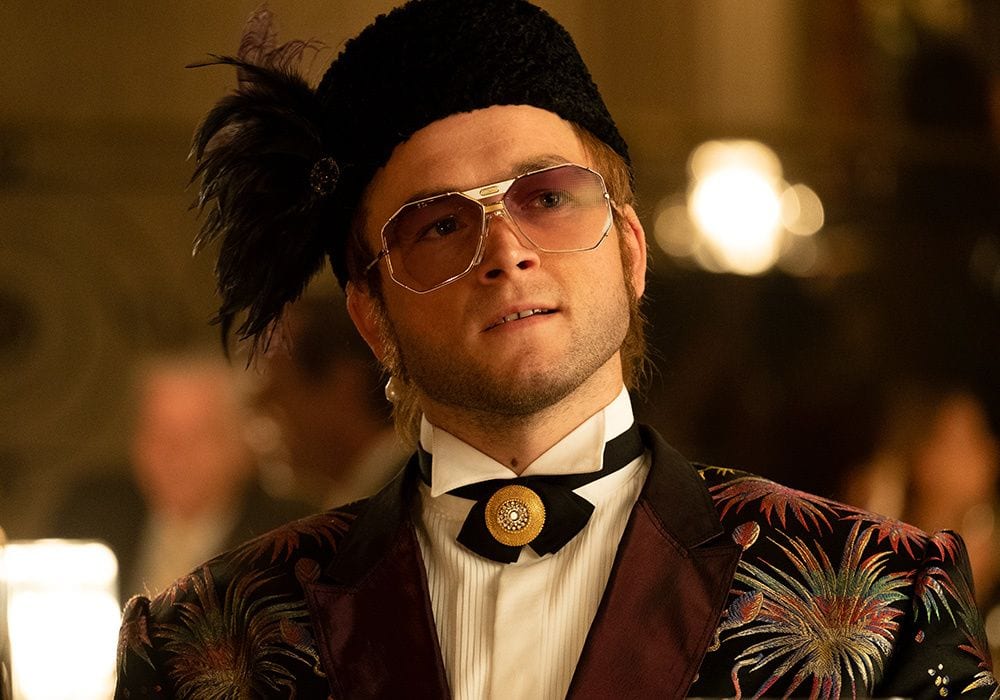 “He probably would’ve been afraid of not coming down, you know? Of not settling down,” says Egerton when asked what John’s greatest fear might have been in during his ascension in the ’70s and ’80s. “You can shoot for the stars, but you can get lost in the ether. I think he was lost in the ether for a long time. But I think he’s quite at peace with himself now. He has a husband. They’ve been together for a long time and they’re still very much in love.”

John has cultivated such a close connection to his fans that many feel as if they know him personally. It’s a rare quality to find in today’s pop stars, and Egerton believes that what makes John unique in that respect is his openness and willingness to be honest about his life.

“There’s still a kid hiding behind those glasses, I think,” speculates Egerton about John’s current state of mind and his connection to his fans. “There’s a wonderful accessibility and vulnerability to him. He’s a man of great integrity.”