Back in 2006, Craig Brewer made a controversial movie called Black Snake Moan about a middle-aged man who chains a 20-something woman to a radiator in an attempt to cure her “nymphomania”. (“Nymphomania” is a term used to police women’s sexual behaviour and/or eroticize them and thankfully, it’s no longer considered a valid diagnosis. However, other controversial terms have arisen in its stead.) Andrew Kightlinger’s Tater Tot & Patton (2017) is a tamer, less kidnapped version of the same idea, in which a 20-something woman named Andie (Jessica Rothe, Happy Death Day, 2017) somewhat voluntarily lives on a ranch with her middle-aged uncle, Erwin (Bates Wilder), while he makes a tough-love attempt to cure her of having a lifestyle he doesn’t respect.

If that sounds vague and confusing, that’s because it is.

The set-up for Tater Tot & Patton is that Andie (Tater Tot) comes to live with Erwin as an alternative to rehab, though the reason she’s meant to attend rehab isn’t entirely clear, since she doesn’t seem to be going through detox or actively struggling with substance use. It’s also not exactly clear what her arrangement with Erwin is, why he feels entitled to order her around, or why she feels she needs to comply with his demands. But order her around he does.

Most of the action in the film’s first half involves fish-out-of-water scenarios where city mouse Andie adjusts to living on a ranch and Erwin adjusts to having another person in his space. They get into arguments about what to eat for lunch and whether it’s time to drink water. He smashes her iPhone because she refuses to mow the lawn, throws a bucket of water on her because she doesn’t get up when he tells her to and, in one bizarre scene, tells her she can’t leave the table until she finishes eating dinner. While Erwin doesn’t technically hold her prisoner — he gives her his car keys, at one point, when she asks to leave — Andie doesn’t have anywhere else to go and, eventually, the only choice available to her is to be more like the person he wants her to be (and admit that everything’s better that way). 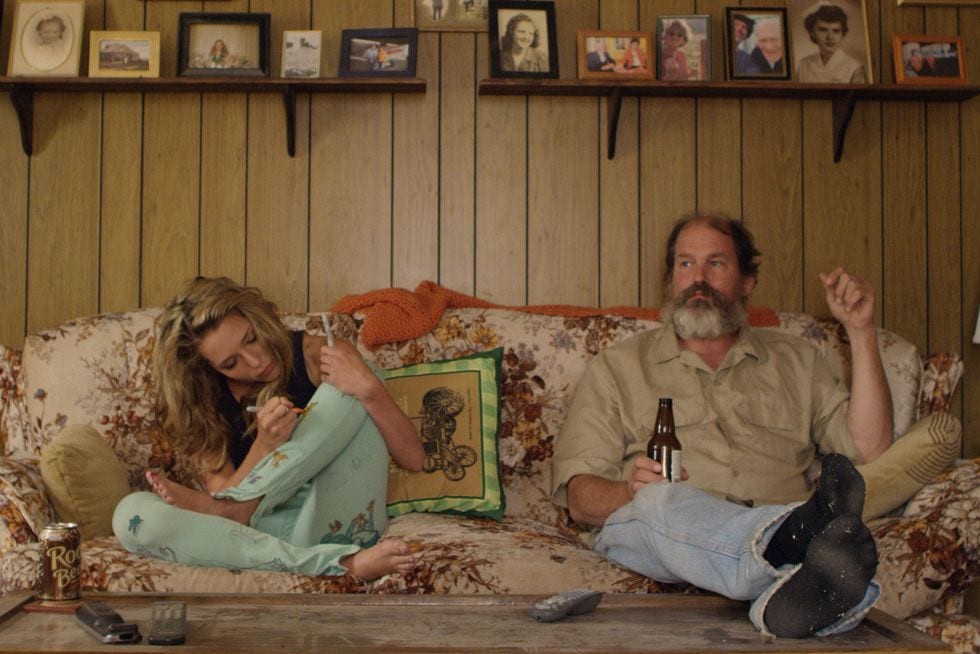 The way Erwin controls her is creepy, as does the way the script suggests that her attempts to resist his control are nothing but a token protest — a series of immature tantrums thrown by a child who hasn’t learned that her parents know better. Even though both of the lead characters are wounded, unlikable people (Erwin is an angry alcoholic, in addition to being really bossy), Andie is treated as being offensive and unsympathetic in ways that Erwin isn’t. As Andrea Thompson notes in her review, the film gives priority to Erwin’s suffering and dignifies his struggle with substance use while shaming Andie for (what is ostensibly) hers.

Erwin and the film seem to agree that Andie’s real problem is that she’s spoiled and selfish — something he screams at her in what’s meant to be a moment of insight. She’s a “princess” because she wants to have phone service. She cries too easily. She’s lazy. In general, she isn’t humble and stoic enough to meet his standards, and the assumption is that, because she annoys him, the things that annoy him about her need to change. In that way, I’m quite serious when I say that the ranch is a rehab program to cure Andie of having a lifestyle Erwin doesn’t respect. It’s not about drugs — it’s about his perception, and the film’s perception, that she’s failing on a moral level by sleeping in and texting people.

On the flipside, Erwin’s humble — and arguably abject — lifestyle is fetishized by the film, which opens with an extended shot of his crotch while he sprawls passed out in bed. His angry, sloppy brand of alcoholism is afforded a kind of sympathetic reverence. I won’t detail the specific series of tragedies that led Erwin down this path — those are held back as dramatic reveals in the film’s second half — but Tater Tot seems to judge that what’s happened to him is enough that he can be forgiven for his mistakes — and maybe even admired for the way he soldiers on in spite of them. It’s a worldview where getting completely wasted, screaming at everyone, and falling down seems to be a better, more dignified response to feeling overwhelmed than crying.

The only time Andie’s suffering is afforded the same consideration as Erwin’s are when she’s been wronged by a male partner in a conservative, heteronormative way (in both cases, the partner cheats on her). One of these instances includes my favourite bit of characterization in the movie, in which the awful-presenting ranch hand, Richie (Forrest Weber), who criticizes Andie for going to college and negs her by saying she’s smart but dumb, is verified as being awful. Based on how things were going up until that point, I was afraid he’d be her true love.

Saying rude things to a woman to cure her of being someone you don’t like is not the same thing as chaining a woman to a radiator to cure her of “nymphomania”, but the dynamic here, wherein it falls on a troubled middle-aged man to teach a young woman how he thinks she ought to behave, is concerning. So is the idea that beautiful, upwardly-mobile young women need to be humbled and controlled for their own good.

Indeed, many of the scenes in the film have strange emotional dynamics, but the actors make the most of them. Jessica Rothe shows a lot more range than she does in Happy Death Day and — although there are some screaming parts to this — turns in a more understated, relatable performance. Bates Wilder provides a similarly-pitched performance and also takes the risk of letting himself look really ugly on screen. It’s not always a great feeling, as a performer, to see a camera circle you with the intent to find unflattering angles, but he fully inhabits the character.

The overarching problem with Tater Tot & Patton is that it doesn’t have the high concept cache or “this is all a metaphor” escape hatch of Black Snake Moan. Because it’s such an earnest, grounded film, in terms of both script and performance, the casually sexist premise is impossible to avoid. We’re trapped within it just as much as Andie is.