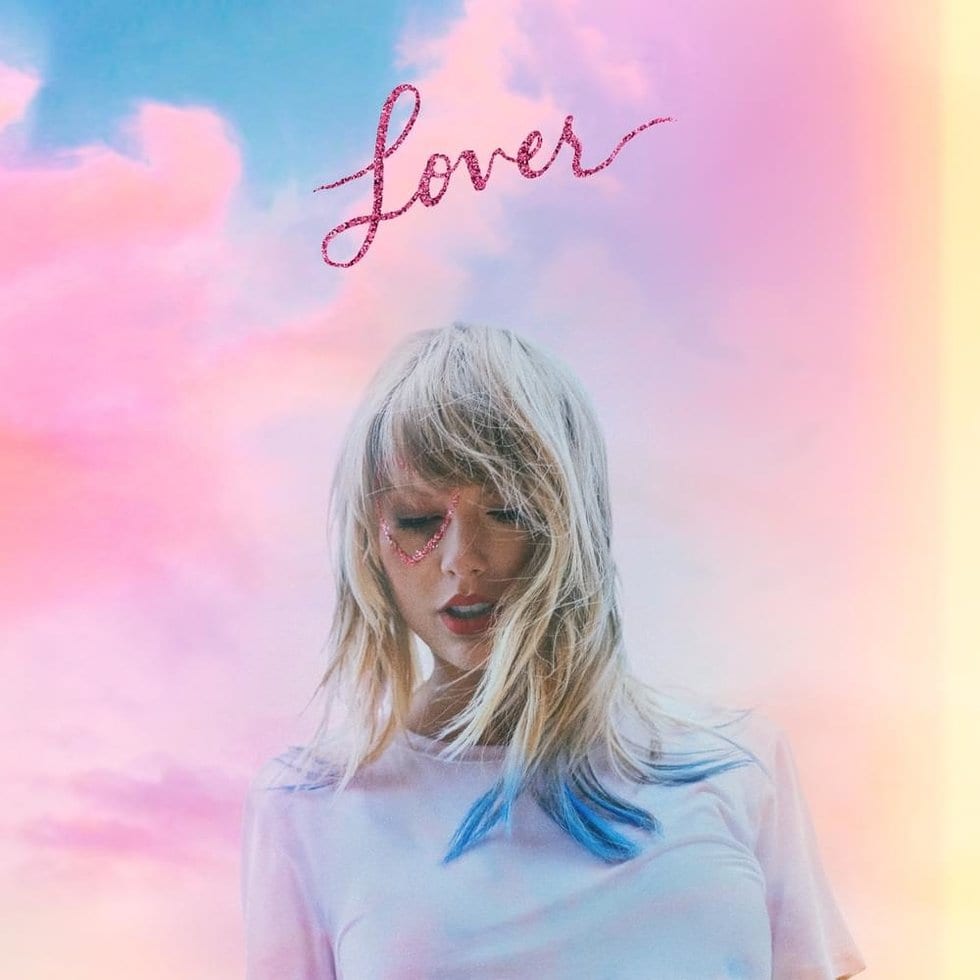 Taylor Swift albums usually drop in the autumn (see: every previous Taylor Swift LP). Taylor Swift’s Lover has floated down to us on a summer breeze, dusted in glitter and drenched in color, less than two years after the moody, volatile Reputation. On Reputation, Swift embraced and reveled in every dig and petty fight that’s taken up space in her brain, co-opting the snake motif from an insult to a defiant badge of pride. While Reputation‘s posturing came across as contrived in parts, it was clear that Swift knew and acknowledged what people were saying about her, both good and bad, and was happy to confirm even the most tawdry rumor in the name of owning her notoriety.

On Lover, however, Swift does a 180, largely choosing to focus once more on romantic affairs. The main difference, then, among Lover and 1989, Red, and Speak Now, for example, is that the songs on Lover largely come from a place of contentment and satisfaction in the middle of a strong relationship, rather than chronicling its downfall. But most significantly, on Lover, Swift looks back on her youth as both mood and metaphor, marking a significant shift from the storytelling in Red, 1989, and Reputation.

“It isn’t love / It isn’t hate / It’s just indifference,” Swift tosses off on opener “I Forgot That You Existed”. It’s a perfect transition from the alternating gloating and resentment of Reputation to the more accepting, laid-back approach on life and relationships that pervades the songs on Lover. It’s the perfect combination of polished and casual—the smooth, minimal production contrasts with Swift’s voice slipping from singing to speaking mid-line, punctuated with bubbly giggles. The song even concludes with her trailing off at the end of the verse, as if already ready to move on from even thinking about this person she forgot existed. While it’s doubtful that we’ve seen the end of Taylor Swift having a beef with people and subsequently writing about it for the better part of a decade, starting a new record with the sonic equivalent of a freshly-turned page is never a bad idea.

The streak of great songs continues through the first half of Lover, with Swift and her production team knocking each fully-realized track out of the park, almost one after the other. “Cruel Summer” is the most obvious Jack Antonoff collaboration on the album (one of several), with its slightly distorted, thrumming production (see “Out of the Woods” on 1989) serving as a veritable fingerprint. Annie Clark, also known as St. Vincent, co-wrote the track as well. Perhaps it’s the kinds of lyrics Swift tends to write for these Swift-Antonoff efforts, but like “Out of the Woods” and “Getaway Car” on Reputation, “Cruel Summer” is incredibly moody and cinematic, soaked in pink-red beach sunsets and swept along in the wind like palm tree leaves.

Indeed, the presence of Antonoff as producer means that at the very least, even if a song here isn’t up to par, it will at least sound interesting. “Death By a Thousand Cuts” is a similarly successful Antonoff collaboration, with its complicated vocal melody sounding like a mid-2000s pop song by the likes of Vanessa Carlton, while while the melancholy mid-tempo “Cornelia Street” would be right at home on 1989, slotted between, say, “All You Had To Do Was Stay” and “Shake It Off”.

Fourth single “Lover” is a much-heralded throwback to Swift’s country-pop roots (specifically the Red era), with its muffled echoing sound almost recalling music produced by T. Bone Burnett. Sweetly romantic, earnest, and sprinkled with those little nuggets of narrative detail that distinguish Swift’s lyrics, “Lover” twinkles and glows with warmth. “The Archer”, the second ballad on the album (and another Antonoff partnership), feels beamed down from the 1980s and hums with tension. Swift’s voice transitions from dreamily melancholy to a passionate in last-ditch effort to reach her lover over a slowly-building beat. It’s utterly riveting to hear her almost realize mid-song, with anxious recognition, that “all of [her] heroes die all alone”.

In the cynical, sarcastic “The Man”, Swift takes to task the kind of gendered double standards that have dogged media coverage of her love life throughout her career. The song’s busy, crunchy electronic sound and partially monotone vocal delivery are the closest to Swift’s Reputation-era songs, making it slightly out of place on Lover. Meanwhile “London Boy” is a goofy ode to boyfriend Joe Alwyn’s hometown and is likely to be the most polarizing track on Lover. Does the name-dropping of various London tourist destinations and British-isms like “I fancy you” work in a self-aware way, or is it just one cringeworthy cliché after another? Reader, this reviewer isn’t quite sure but is leaning in the former direction. I do enjoy Estelle’s “American Boy”, after all, which is about as subtle, so my tolerance for well-meaning touristy kitsch is undeniably high.

It’s a testament to how far Swift has come as a lyricist, and a reminder of much she’s matured and grown in the public eye, that the specific evoking of adolescent love and romantic daydreams come across not as immature, but as the reminiscing of someone genuinely older and wiser in the ways of relationships. The one-two-three punch of consecutive tracks “I Think He Knows”, “Miss Americana and the Heartbreak Prince”, and “Paper Rings” is a delightful flight of fancy, conjuring up the excitement of high school crushes either explicitly in the lyrics or their exuberant, gushing expressions of emotion.

As we see in the chorus of “I Think He Knows”, part of the allure of Swift’s new crush is how young he makes her feel: “He got my heartbeat / Skipping down 16th Avenue.” You can envision Swift’s struggle to keep her composure as the high school girl inside her clenches a love note in her fist, jumping for joy. And while the first verse of the new-wave-y “Paper Rings” mentions wine gone cold, the chorus is the pure cotton-candy frisson of teen love, with all the head-bopping appeal of No Doubt’s “I’m Just a Girl” or something out of Avril Lavigne’s mid-2000s repertoire. In terms of high school movie soundtrack perfection, it’s the narrative prequel to 1989‘s “How You Get the Girl”. More than ten years out from the world of schoolyards and high school scoreboards, when the highly painful, specific emotions of songs like “You Belong With Me” and “Fifteen” (Fearless) aren’t so fresh and painful anymore, on Lover Swift revels in experiencing these kinds of feelings once more.

Meanwhile, “Miss Americana and the Heartbreak Prince” is both high school forbidden romance and story of Swift‘s political awakening, turning Swift’s usual lyrical mode of comparison on its head. Rather than ruminating on high school love with the dramatic flair of an adult soap opera star, “Miss Americana and the Heartbreak Prince” purposefully mines cliches of American adolescence in the service of more serious, adult concerns. Rather than having any ordinary boy on her mind, Swift sings (in Lana del Rey-esque throaty tones) about America itself as a love interest giving her trouble. Here, too, we see how much Swift has changed over the course of her career, as she’s shifted from a desire to be publicly apolitical to formally endorsing Democratic candidates in her home state of Tennessee in 2018. And now, with all pretenses at remaining “Miss Americana” in Trump country ripped away, Swift seems to feel free to say what is on her mind.

Unfortunately, after the stirring, moving, Dixie Chicks-featuring “Soon You’ll Get Better”, the back half of Lover is largely forgettable filler, peppered throughout with the mediocre tracks somehow chosen as the lead singles. “ME!,” the candy-colored first single, commits at least three crimes, both as a song and as a taste of the twists and turns of Lover. It’s overly simplistic, with lyrics that sound as though they were written to accompany a knockoff Pixar children’s movie. The song dips dangerously close into purloining the vocal melody of Emeli Sandé’s “Next to Me”, a far superior song. It also wastes the talents of Brendon Urie and squanders the promise of Panic! at the Disco’s delightfully baroque weirdness. Indeed, if it weren’t such a high-profile collaboration, “ME!” would be perfectly suited to the role of “bonus track for a special Target edition of the album”. (On a version of Lover with a more selective tracklist, “London Boy” would also be an ideal bonus song.)

While “You Need to Calm Down” at least has more personality and bounce, it feels like an awkward bridge between the sneer of Reputation and the open-hearted vibe of Lover. While it’s unabashedly great that Swift has dedicated her political muscle to advocating for LGBT equality, the song announcing her role as high-profile ally is not her best work, and doesn’t match up to Lover‘s first half in quality. Meanwhile, “False God” and “Daylight” are about at “So It Goes…” from Reputation levels in terms of keeping interest—that is to say, they keep very little interest—and the saxophone-y flourishes on “False God” are about a half-step below “Careless Whisper” in terms of pure cheese. The relationship breakdown and attempt at reconciliation described in “Afterglow” come across as entirely generic and utterly un-Taylor Swift, despite an appealingly fervent vocal performance.

The sole exception in the lesser second half of Lover is “It’s Nice to Have a Friend” and its remarkable understatement. Describing the sweep of a relationship from “sidewalk chalk covered in snow” to “church bells ring, carry me home” with the simple refrain of “it’s nice to have a friend” is an odd little bit of underplaying from a musician who has mixed every dramatic metaphor under the sun into describing her romances, and it’s a welcome novelty. It’s also a departure from the usual narrative propulsion of a Taylor Swift relationship song—the furtive meetings at clubs and being swept off her feet by a dashing hero are replaced with the simple, stable progression of friends to lovers.

Swift seems to be a long way from the swirling dark clouds that crowded everything about Reputation, from the slick-mean first single “Look What You Made Me Do” to that Hot Topic-looking album art. Ultimately, Lover is overstuffed and meandering, but serves as a positive reprieve from her past struggles in the public eye, and represents an artist at the peak of her creativity, power, and—one hopes—continued romantic bliss.