Have you heard of Alice Howell? Unless you’re a connoisseur of silent film slapstick, the answer is probably no, because she’s utterly forgotten. Yet she was a famous star for about ten years, and this DVD collection from Undercrank Productions is here to resurrect her name.

Howell conveyed the persona of a working-class clodhopper with a huge pile of frizzy hair plopped on top of her head, and she threw herself into physical comedy as much as Lucille Ball, who makes a reasonable comparison. Her story is sketched in between the 12 restored shorts on this two-disc set. Her film career began when, after a stint in vaudeville, she and husband Richard (Dick) Smith moved to California, where she quickly rose from an extra in Mack Sennett’s Keystone comedies to supporting roles and featured parts, such as in Charles Chaplin’s Laughing Gas (1914).

What this collection presents as her best Sennett film, the anonymously directed Shot in the Excitement (1914), appears to be as improvised as many such films were. She plays the bumpkin lass courted by two rivals who spend the whole reel inflicting damage on each other with Alice often caught in the crossfire. Bricks, water, flying cannon balls and steep cliffs are employed to express the eternal verity that love hurts. Nobody confused it with Wildean sophistication.

That same year, Sennett’s assistant Henry Lehrman founded his own L-KO Komedy Company, whose shorts were distributed by Universal. Lehrman lured several of Sennett’s people, including Howell. Thus, we have three Lehrman-directed items: Father Was a Loafer, Under New Management (both 1915) and How Stars Are Made (1916). In the first two, Howell plays angry wives.

The first title centers on Billie Ritchie, somewhat imitating Chaplin in top hat and tails and funny walk, as a drunken paterfamilias who abandons the family upon discovering that the stork has deposited triplets in addition to his other four brats. After rescuing a rich damsel (Gertrude Selby), he proposes to wed the grateful ingenue, but when his wife reads of the impending nuptials in the paper (all this seeming to take place in one afternoon), she shows up to spoil the bigamy. We can’t help recalling Margaret Dumont exclaiming “Why, that’s bigamy!” to Groucho Marx, who replies, “Yes, and it’s big o’ me, too.”

As the wife of an erring fatcat boss (Gene Rogers) in the next film, Howell displays even more force upon discovering his dalliance with a secretary (Selby) and takes over the company. One clerk is Raymond Griffith, later known for dapper man-about-town schticks, and the other is Fatty Voss, a large and agile comic who appears in several of these titles.

Only half of this two-reeler survives, and the same is true for How Stars Are Made, which takes a backstage view of the L-KO studios as Howell (as Lillian Russell!) tries to break into show biz with the help of Griffith, who is now sporting his typical tux until he dresses up as a devil. Selby’s roles are getting smaller as Howell waxes, and here’s the first time in this collection we see Howell as an independent working gal instead of the wronged wife.

In 1916, Lehrman departed and the studio was taken over by Abe and Julius Stern, the brothers-in-law of Universal’s Carl Laemmle. John G. Blystone took charge of writing and directing their hottest property, the Howell films put out under the Century Comedies banner, and a quantum leap forward is visible in the creativity of every department. It’s a pleasure to watch the evolution.

Neptune’s Naughty Daughter (1917) begins with an unusual and visually interesting close-up of Howell, as seen from behind, rowing a boat and tumbling toward the camera as the boat rocks on the shoreline. She plays an unhappy, bullied, rebellious daughter who elopes with a sailor, gets a job as a manhandled waitress who deals ingeniously with her masher, and then gets temporarily shanghaied, again defending herself admirably. This film has an astounding stunt involving a moving wheel on an automobile, and we must wonder if Howell really did that herself; if they were smart, they used a stunt double.

More shipboard shenanigans grace the epic In Dutch (1918), in which Dutch lass Hulda (Howell), complete with wooden shoes, stows away in a crate to America and resourcefully avails herself of food and drink. Blystone keeps every scene rocking and swaying in convincing seafaring ambiance, escalating this element absurdly and riotously until Hulda’s future hubby (Voss) goes sliding back and forth across sets in his bathtub.

At the halfway mark, the scene shifts to the dry land of a nightclub where they both find work, hubby as a waiter and Hulda as a dancing sensation. “The Smiling Fairies Cabaret was one of those places where a fellow could get a delicious beating,” says the title card. A lengthy routine involves someone’s thwarted attempts at suicide. Unfortunately, the exciting wrap-up, in which Hulda foils kidnappers, is missing most of its footage. Bald James Finlayson, later an eternal foil for Laurel & Hardy, plays five roles.

Except for its final film, Disc 2 consists entirely of movies released in 1920, when Howell and husband Dick Smith worked for the Chicago company Emerald Film Company (later Reelcraft). Most of these films co-star Smith, who usually directs as well. 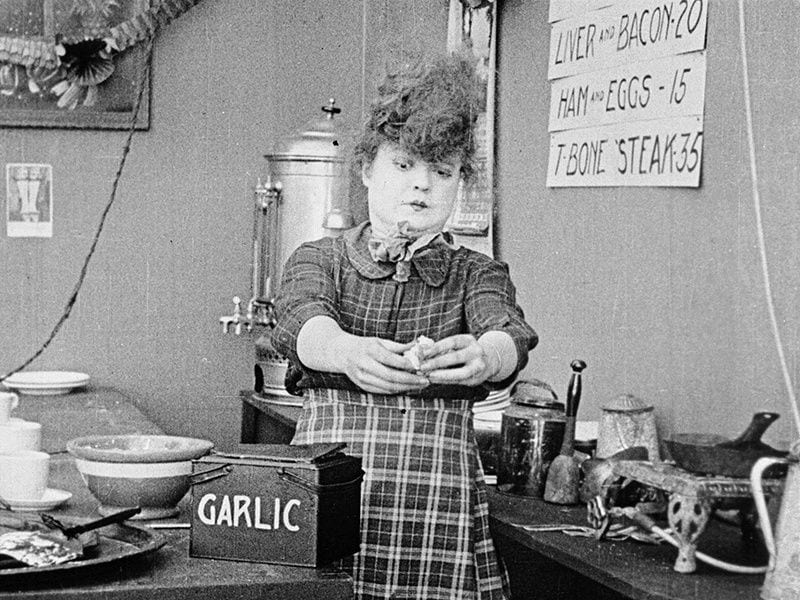 Distilled Love, co-directed by Smith and Vin Moore, was a leftover unreleased Century production co-starring Oliver Hardy as the theatrical villain who accuses our heroine of having an illicit baby. His Wooden Legacy finds Howell as an incompetent maid who inherits a wooden leg and performs lots of kitchen antics. Her Lucky Day explains its nonsensical running around as a fever dream, while the more ambitious Cinderella Cinders, directed by Frederick J. Ireland, has Howell and Smith masquerading as royalty at a fancy party and getting increasingly drunk. Here, Howell’s persona is more confident than ever.

She and Smith finished their Reelcraft contract with a few more films in California, including the in-your-face absurdities of A Convict’s Happy Bride, which never even attempts realism, much less credibility. A major scene involves biscuits so light they float in the air like willful bubbles. Accused of shooting a rival, Howell’s husband gets sent to the laxest prison ever (across the street) and comes home for lunch.

More research is needed, because scholars aren’t certain why Howell slowed down for a few years. She went back to regular work at Universal for a series of 1924-25 shorts in which she co-starred with Neely Edwards as her husband and Bert Roach as their cartoonish butler. She retired in 1927 after a few freelance items.

If Under a Spell (1925) is typical of the late Universal series, we’d love to see more of them. Not only is it in the best shape of the bunch on Disc 2, with Smith’s direction more visually stylish and confident than before, but its free-wheeling comic invention is the disc’s funniest and its structure the tightest. 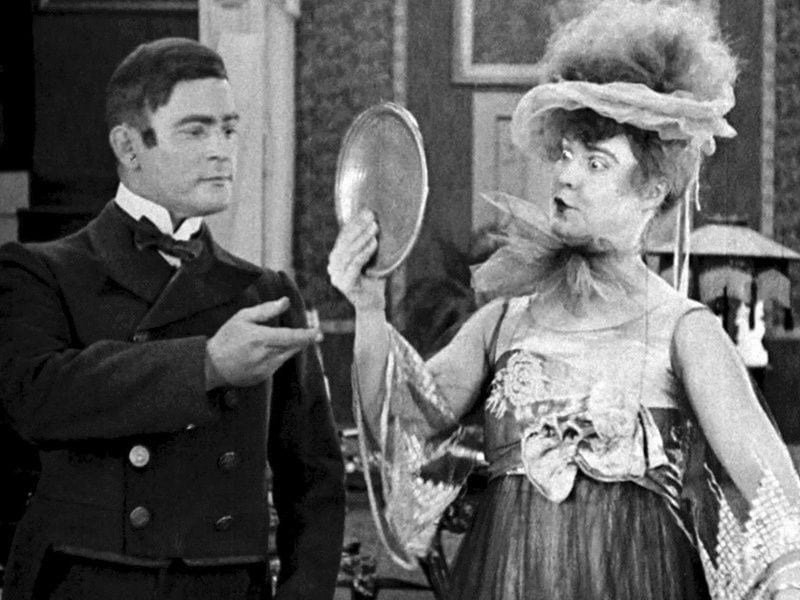 When a cross-dressing burglar leaves his feminine shoe behind, the wife thinks her husband is cheating, so she hires a hypnotist to charm him. Unfortunately, the man first convinces hubby he’s a monkey, which leads to escalating hilarity and excellent physical humor by all. The butler dons a gorilla suit for a digression with a mad scientist. It’s well-paced, detailed nonsense, all over in one reel.

Except for Blystone’s films, scripts are never credited, and it’s easy to suppose the stories were collaborative efforts worked out by everyone involved. This would imply that Howell had creative input beyond her vigorous performances, and perhaps this accounts partly for her strength and spunk. Although constantly pursued by villains, you never feel she’s in danger or that she won’t get out of it herself. For example, she’s the one who charges in to save the party from robbers in Cinderella Cinders, although it helps that she’s had more than a snootful.

These prints, some in better shape than others, come from various sources around the world and have been produced and scored by Ben Model, in collaboration with the Library of Congress, via 358 crowdfunders on Kickstarter. Aside from their value as archival comedy history, efforts like this make nice adjuncts to Kino’s recent Women Pioneers box. There’s always more to discover in the world of silent cinema and its lost stars.