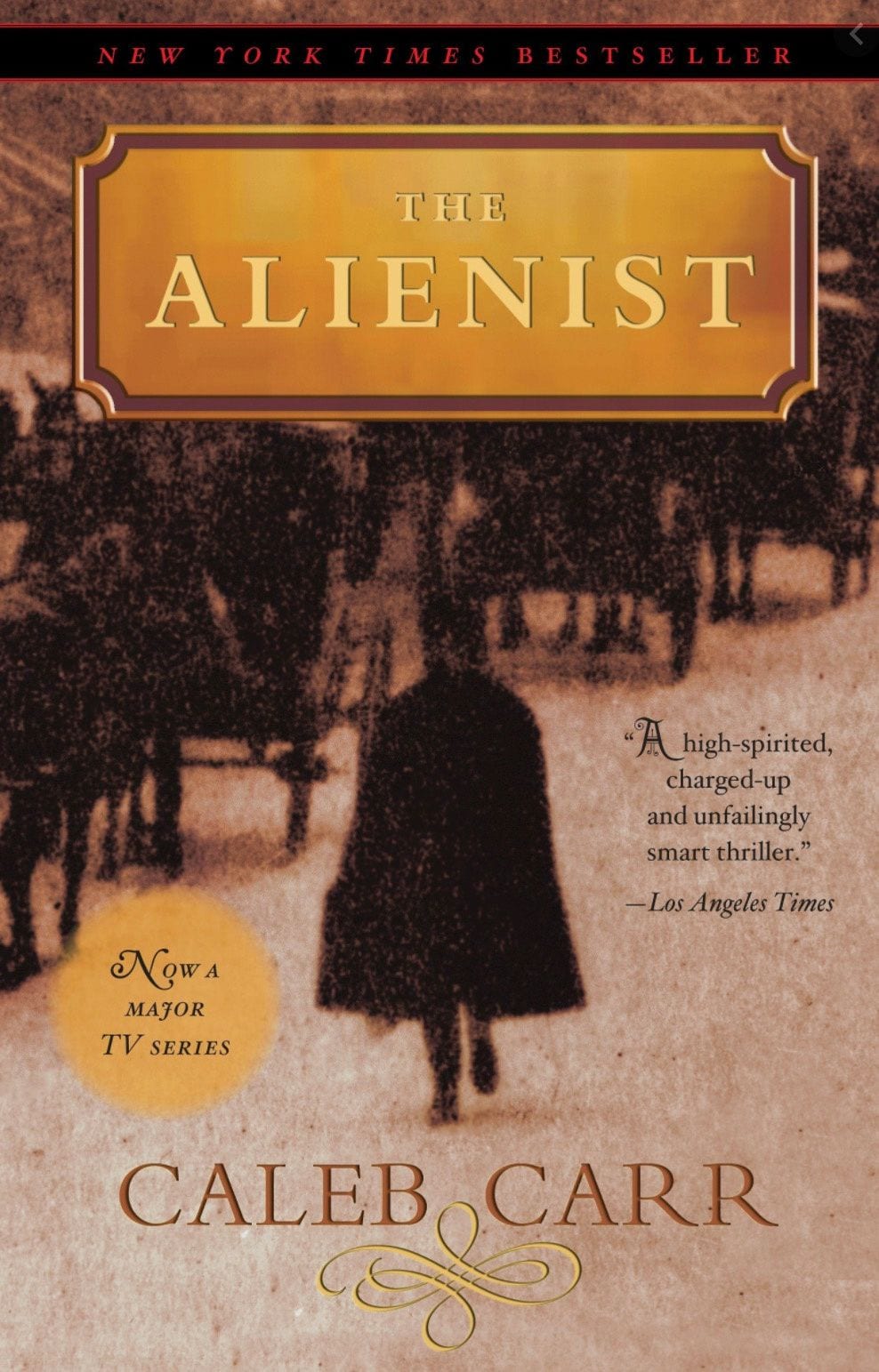 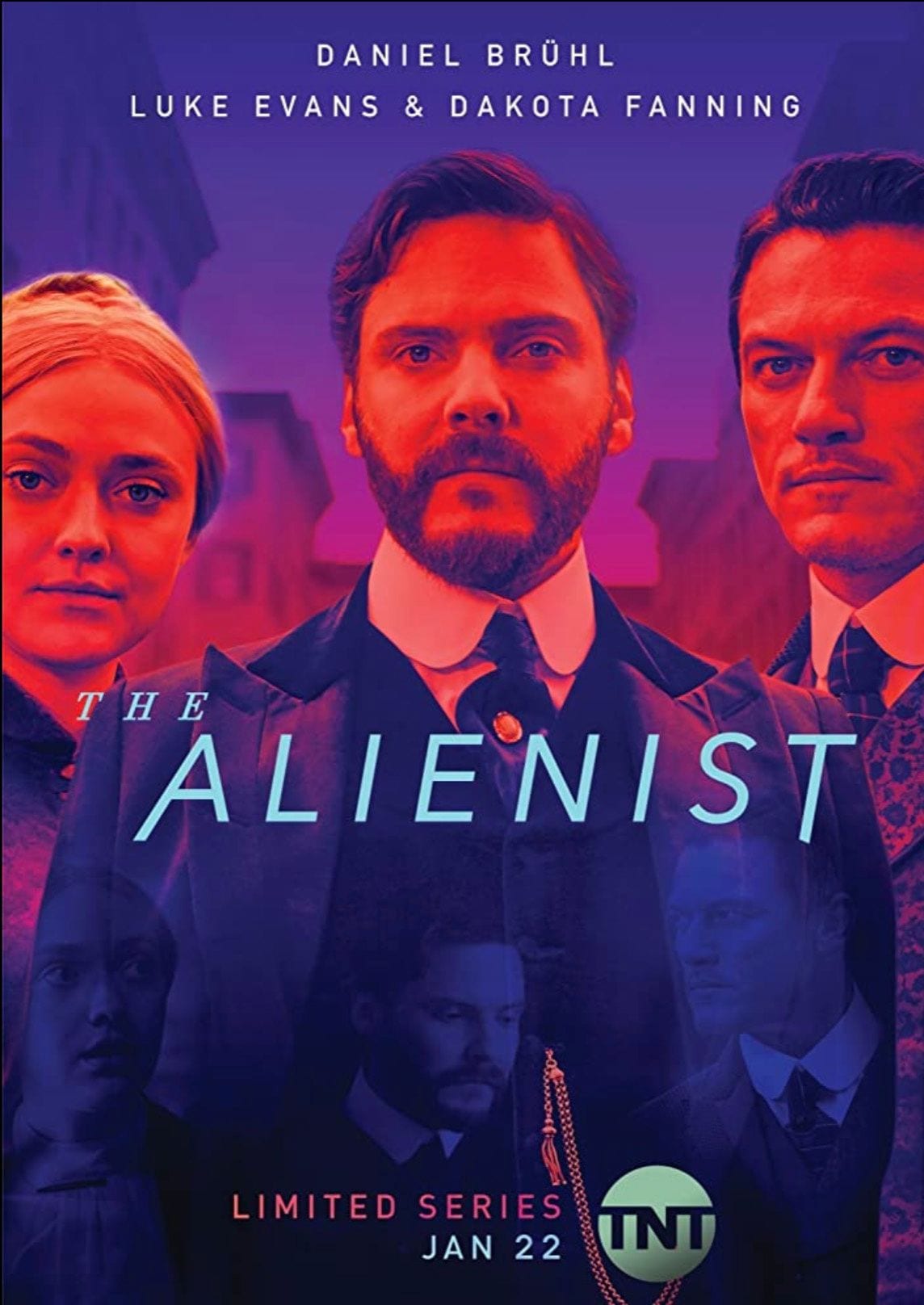 The opening title sequence of TNT’s
The Alienist was nominated for an Emmy in 2018. With its haunting musical score and graphic visuals of New York City’s urban landscape intercut with the main characters’ faces in various stages of construction and decay, the Emmy nomination is justified. But the title sequence is more than just aesthetics: the juxtaposition between the city and the characters establishes The Alienist‘s central tension and theme.

Here’s where it gets interesting. TNT’s
The Alienist is an adaptation of Caleb Carr‘s 1994 novel of the same name, and both the show and the novel meditate on the same social issues. However, though both renditions of the story are asking the same questions, they come to exactly opposite answers.

Set in 1896 New York City,
The Alienist is the story of Laszlo Kreizler a psychologist-turned-detective, who uses 19th century psychology to track a serial killer of young boys. Like Jonathan Groff’s Holden Ford in Netflix’s Mindhunter, Kreizler creates a psychological profile of the killer through a blend of cutting-edge psychology and detective work.

Carr’s novel is a period-piece detective story brimming with vivid historical detail and personas. His most thorough recreation, though, is of the psychological theories of the late 19th century. The novel’s central tension hinges on the debates between proponents of determinism and of free will. Kreizler champions social and psychological determinism (the idea that people are products of their social context, early childhood experiences, and biological makeup), while his Harvard professor William James argues for a theory of free will (the idea that people have the ability to choose their actions freely at any given moment). Though oversimplified, Carr successfully uses these competing theories to establish his real purpose: a critique of the American social system. 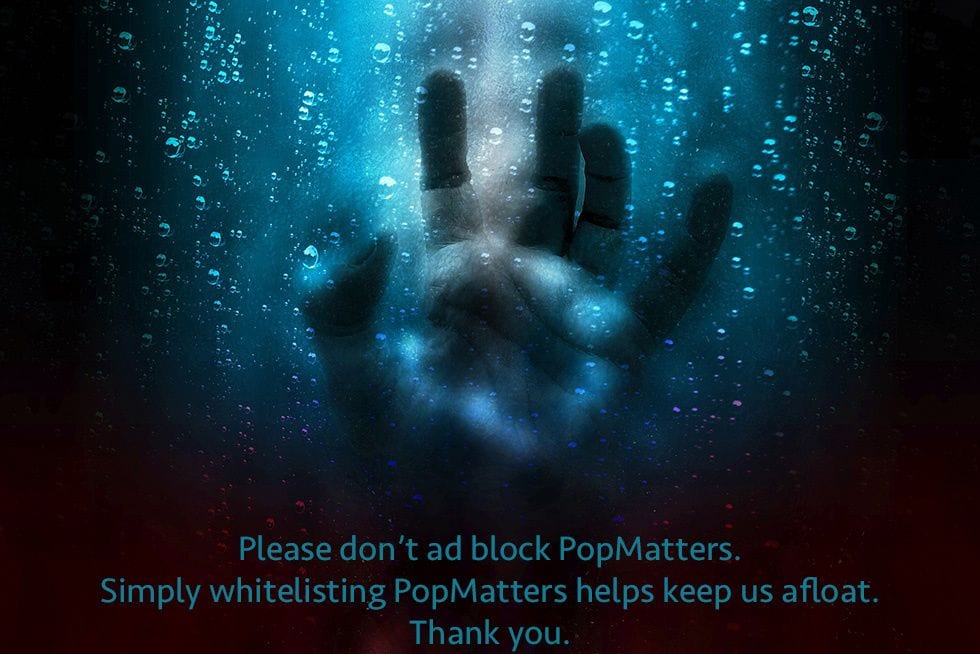 John Moore, the novel’s narrator and Kreizler’s old college chum, sums up the stakes of these two competing psychological theories. While watching a fictionalized debate between Kreizler and James, Moore is torn “between loyalty to [Kreizler] whose beliefs had always made [Moore] uneasy and enthusiasm for [James] and a philosophy that seemed to offer the promise of limitless possibilities for not only [Moore’s] but every man’s future” (47). Moore puts his finger on the novel’s cutting social critique: Kreizler’s social determinism makes Moore uneasy because it lays the responsibility—say, for the brutal murders of young boys—at the feet of the society that creates the individuals, while James’s free will maintains that responsibility lies with individual actors.

And Moore is not the only one who is uneasy. New York’s social elite actively obstruct Kreizler’s investigation, though not for the clichéd purpose of protecting one of their own (the TV show’s red herring is that the killer is a spoiled adult-child of an upper-class family), but because they fear the implications of Kreizler’s social determinism. If he proves that systemic corruption and social inequality create a society capable of producing brutal child murderers, the social status quo—this theory suggests—would have to change. Hired by the elite to do their dirty work, the corrupt ex-chief of police spouts off a fiery but revealing tirade against Kreizler and his ideas: “Rank determinism…speaks against freedom, against responsibility! Yes, I say it is un-American!” (301).

“Un-American”—there’s the rub. On the surface, the novel is about a psychologist-detective tracking down a serial killer, but just beneath the surface lurks a narrative that probes the culpability of an American capitalist system for its role in the crimes committed by those oppressed under the ideology of the “American Dream”. More than a simple tug of the proverbial bootstraps is needed to address the issues underpinning systemic inequality. Carr takes to task American capitalism and neoliberalism. The Alienist‘s antagonist is not the serial killer — society itself. The murderer is but a symptom; the social system that perpetuates gross inequality and inhumanity is the disease.

TNT’s The Alienist takes a different approach, however: the show keeps the novel’s plot intact while completely reversing its social criticism. 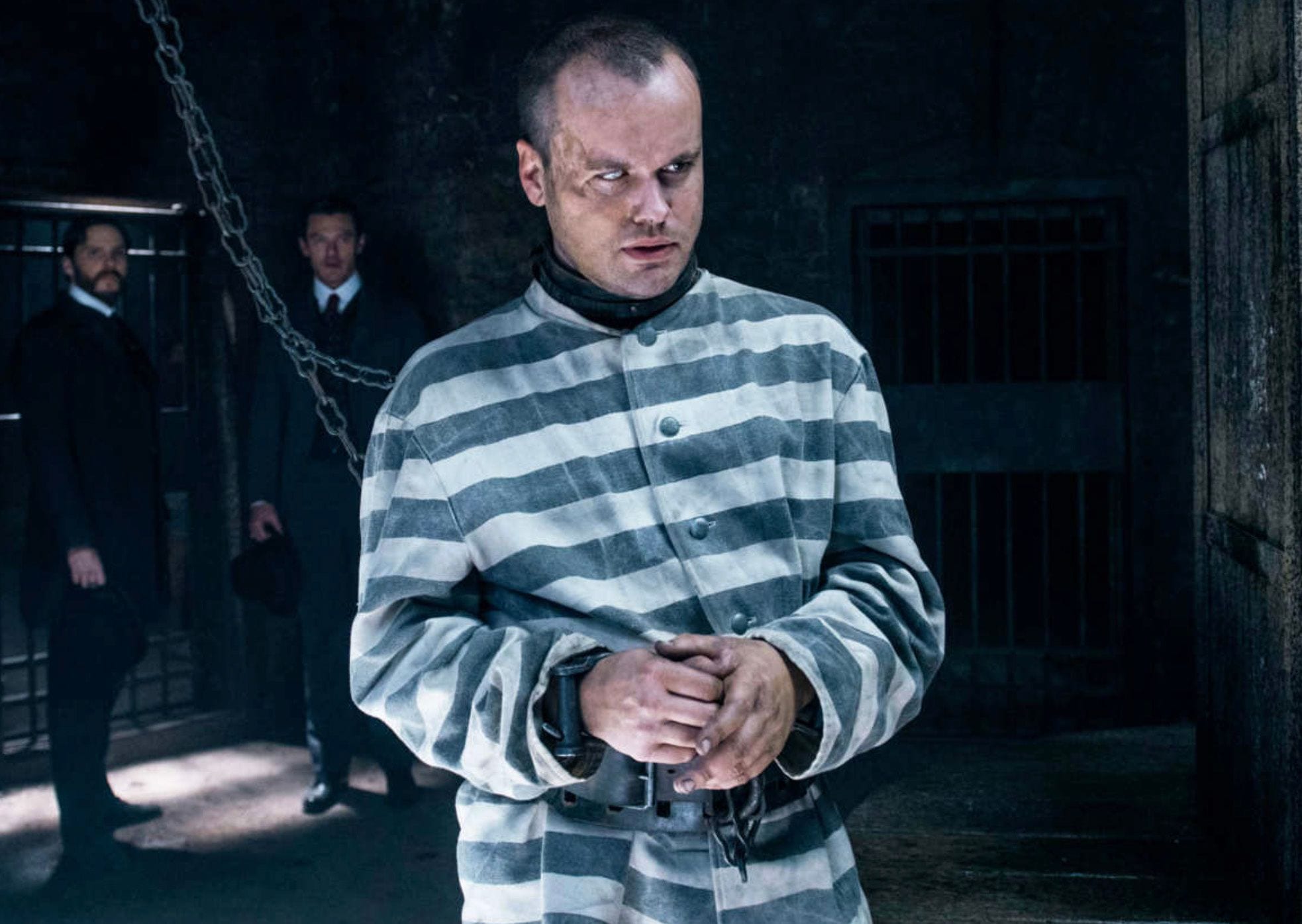 Consider the following scene, entirely original to the show, from Episode 5, “Hildebrandt’s Starling”. Kreizler (Daniel Brühl) consults an old psychology professor (not James, but David Warner’s Professor Cavanaugh) for assistance in overcoming his biases toward the case. The professor recalls Kreizler’s first college examination in which he was required to describe a starling. After several attempts, each of which the professor deems incomplete, Kreizler spends three days examining the bird, at which point “the poor thing began to molt.” It was then that Kreizler had finally “seen” his bird, the professor claims.

Part of this exchange is about reminding Kreizler to value method over conclusions, which helps him get back on the killer’s trail. But there is another important component at play: time. Echoing the images of construction and decay in the opening credits, the bird begins to molt—to change—over the course of the examination. The bird, like a human being, is not a static object that can be assessed once and for all; living beings require continual examination because, over time, they change. 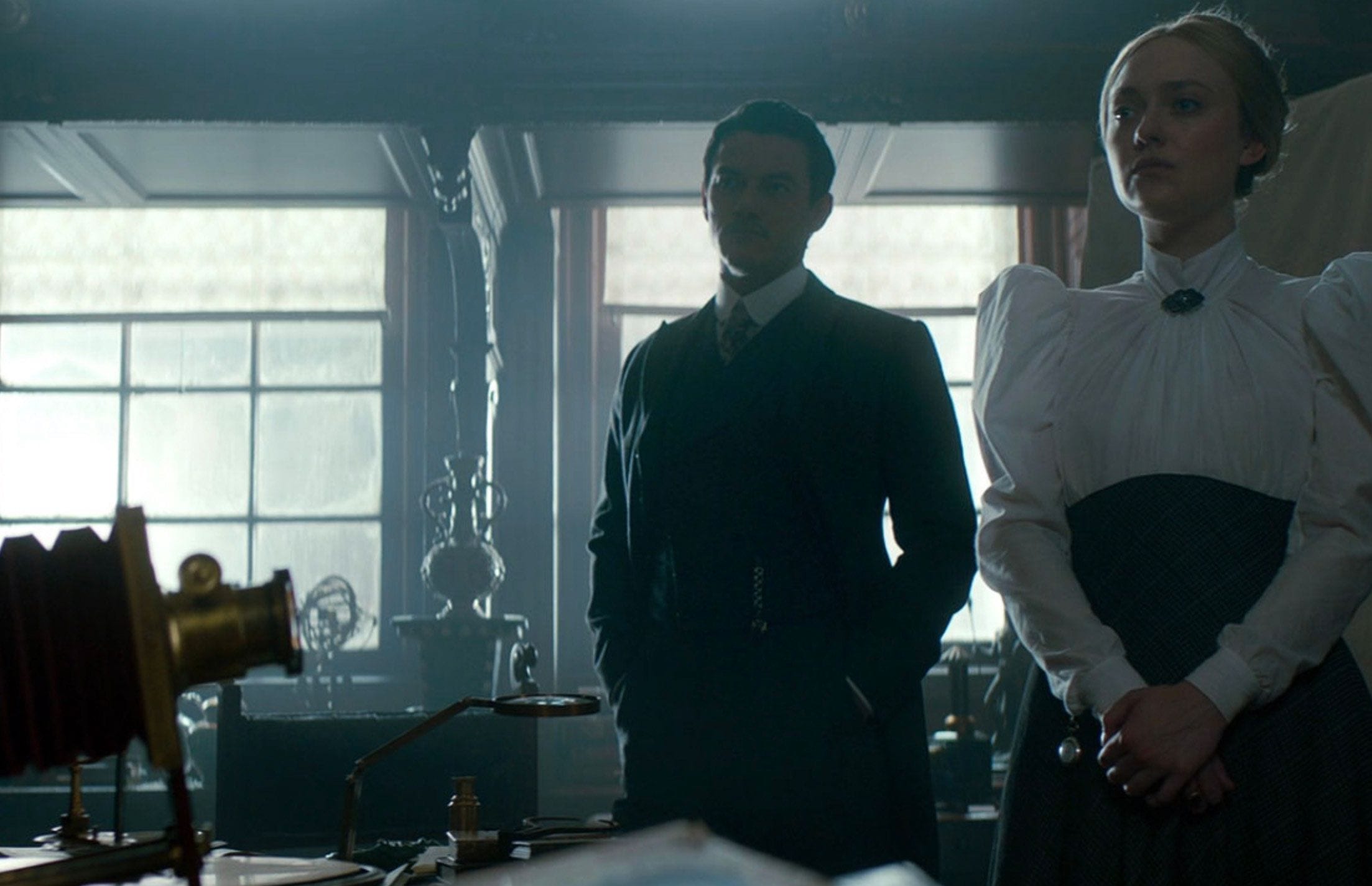 Like the bird, the characters in the show change over time as well. But they change through personal exertions of free will. Moore (Luke Evans), a heavy drinker, white knuckles through his alcoholism in order to prove his marriageability to Sara Howard (Dakota Fanning). Kreizler’s housekeeper and eventual love interest, Mary (Q’orianka Kilcher), who in her youth set her father on fire as revenge for repeated sexual abuse, proves through her years of dutiful service to Kreizler that she is a changed woman.

In the final episode of the series, Kreizler and Sara reveal to each other the secrets of their past, secrets that continue to torment them in adulthood. Rather than being a congenital defect (like it is in the novel), Kreizler’s underdeveloped arm is the result of a violent outburst by his abusive father. Sara reveals that she assisted her father in killing himself after his botched suicide attempt. In response to these revelations, Sara tells Kreizler that they must use the memory of their pain to help others, instead of allowing their pasts to haunt them (a watered-down description of determinism). If everyone was determined by their childhood trauma, she states, “we’d all be murderers.”

This prompts the concluding scene in the series in the “Castle in the Sky” episode, just before the final credits roll. Kreizler visits his ailing father (Tim Barlow) in order to make amends. Despite his father’s perennial maxim that “[n]ature never allows a man to be more than he is. Only less,” Kreizler now believes, after the events of the series, that “we can be better than nature intended.”

Better than nature intended. This is the sentiment that concludes the TV series.

The idea that an individual could be better than nature intended would be, if you’ll forgive the pun, alien to the Kreizler of the novel, to say the least.

Carr’s novel contains a pointed critique of systemic inequality. It depicts a power and class conflict through competing psychological theories of social and individual responsibility for one’s actions, bringing to the fore a social hypocrisy that usually remains behind closed doors.

TNT’s reimagining of The Alienist papers over this critique with a neoliberal narrative that shifts responsibility from society to the individual.

I’ll end on an example: After the killer is apprehended, Kreizler dissects the killer’s brain in search of anatomical abnormalities that might explain his violent behavior. This occurs in both the novel and the show. In both, the brain is found to be perfectly normal. The Kreizler of the novel concludes that the healthy brain “indicates that [his theory of determinism] was right” (Carr 481). In the show, the exact same evidence leads to exact opposite conclusion. The Kreizler of the show states the healthy brain “proves we don’t know anything. God works between the lines.”

God works between the lines? This is an extremely uncharacteristic statement, even for the show’s reimagining of Laszlo Kreizler, because Kreizler is a staunch and outspoken atheist and refuses to concede anything to a higher power.

This moment of confusion is emblematic of the show’s ultimate failing: its neoliberal revision of the source material turns all deviant action into a moral failing on the part of individual actors, refusing to acknowledge the political and economic underpinnings of social life or hold accountable the people with the most power.

Ultimately, The Alienist dramatizes the struggle over who controls the narrative of responsibility, and TNT’s adaptation makes it clear who is winning.