If that’s not sufficiently astonishing, the movie is basically telling the same story and theme that Hollywood would recycle as The Jazz Singer (1927), which was based on Samson Raphaelson‘s 1925 play, based in turn on his 1922 story “The Day of Atonement”. Although the Jewish Day of Atonement, or Yom Kippur, features prominently in both movies, The Ancient Law must have been made without knowledge of Raphaelson’s story and has several crucial differences.

The most important difference is that The Ancient Law is essentially a comedy rather than a tragedy, although its tone is so ambiguously balanced that, as far as the viewer knows, it could go either way. Like many of the best comedies and tragedies, this film understands how each mode is often a hair’s breadth from the other.

The story begins in a Jewish village on the edge of Russia, what was once Galicia. Rabbi Mayer (Avrom Morewski of Warsaw’s Wilnaer Troupe, according to the credits) is the Orthodox village elder, old and bearded and bent, while his tall young son Baruch (Ernst Deutsch) prepares to follow in his footsteps. A bashful boy, he’s adored by his hefty mama (Grete Berger) and awkwardly makes overtures to Esther (Margarete Schlegel), daughter of a local scholar played by Fritz Richard. (Both Wikipedia and IMDB are currently giving out confusing misinformation that Werner Krauss plays this character.)

Fate arrives upon Baruch in the form of the annual visit from Ruben Pick (Robert Garrison), a traveling beggar or “schnorrer”, as when Groucho Marx says “Did someone call me schnorrer?” in the song “Hooray for Captain Spaulding”. A liminal figure between the shtetl and “the world”, and something of a trickster role, Ruben Pick delivers news between Jewish settlements and carries word of the great outside. In the last act, it’s Pick who will bring the magical “poison” of Shakespeare into the Rabbi’s house — he will first open the book wrong way round — thus implying a healing and subversive power of literature while setting off implicit connections between Mayer and Claudius, Lear, Shylock, Prospero. 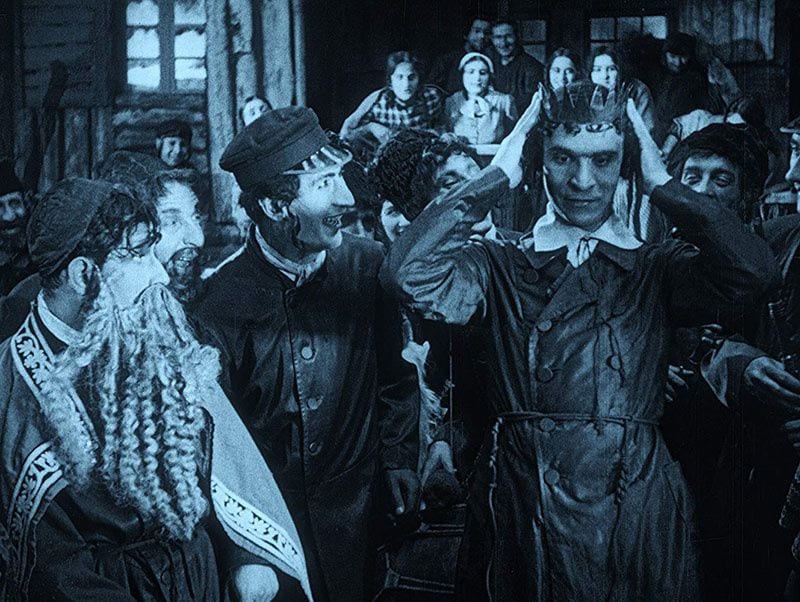 When the Rabbi is angered that his son should masquerade as King Ahaseurus during the Feast of Purim, when players go from door to door in costumed revelry for treats, Pick dazzles Baruch with information about how actors are treated with respect in Vienna and appear in glamorous theatres. Baruch is bitten, and the early part of the drama is the heartbreaking family conflict of a son not only leaving home but becoming “dead” to his father.

Then come the film’s most light-hearted and satirical segments, as Baruch falls in with traveling players and performs Romeo and Juliet in a barn to the mixed amusement and boredom of visiting aristocrats. Crucial to Baruch’s future is Archduchess Elisabeth Theresia, played by Henny Porten, another of Germany’s major stars. Her cynical, smirking, eye-rolling retinue believe the Duchess is bored and whimsical when her eye is caught by the gangly Romeo whose sidelocks come loose and sway about his head during the climactic scene.

The scenario asks us to believe that she’s moved by a purer form of love into moving heaven and earth to provide Baruch’s opportunities, and that their relationship of patronage is naturally chaste due to his sense of propriety. The Duchess makes an analogy when she remarks that she too operates under a strict ancient law: “etiquette”. While this might seem the most romantic and unlikely element of a story that’s otherwise full of beady-eyed observations on human vanity and behavior, Porten’s production company is responsible for this movie, so her character’s manipulations are paralleled by the real-life woman. 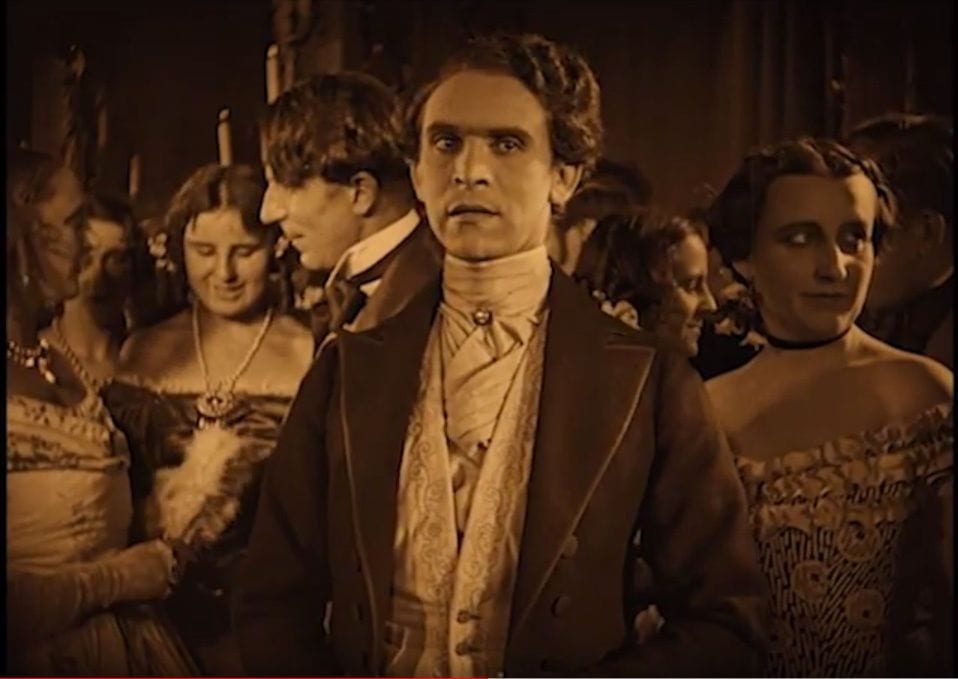 We shan’t go further into the story’s ups and downs in Vienna, where the essential conflict is between Baruch’s religious upbringing and his welcome into the world of glamorous Gentiles who don’t think much of Jews. As with The Jazz Singer, it’s the drama of assimilation and its discontents, the negotiation between worldly desire and one’s allegiance to father and God, who are literally the same for all intents and purposes.

Again as in the later film, parallels are drawn between public performance in the theatre and the collective rituals of the Synagogue. The Ancient Law underlines this point with cross-cutting between Yom Kippur in the shtetl and the Vienna performance of Hamlet, where the last of Baruch’s outward orthodox observance is essentially “dying” while his unknowing community mourns and the Viennese applaud.

If it’s not a spoiler, one crucial difference between the films is how the tension is resolved. For reasons unfathomable to your reviewer, who had good relations with his parents, I’ve always been a sucker for parent-child reunions in movies. Whenever a story sways in that direction, all critical distance goes out the window in favor of the lump in the throat and the waterworks, nor would I have it any other way. If you want reconciliation between the stiff-necked and the repentant, this movie’s got a doozy, and yet it never argues that Baruch was wrong to seek his fortune in the city. 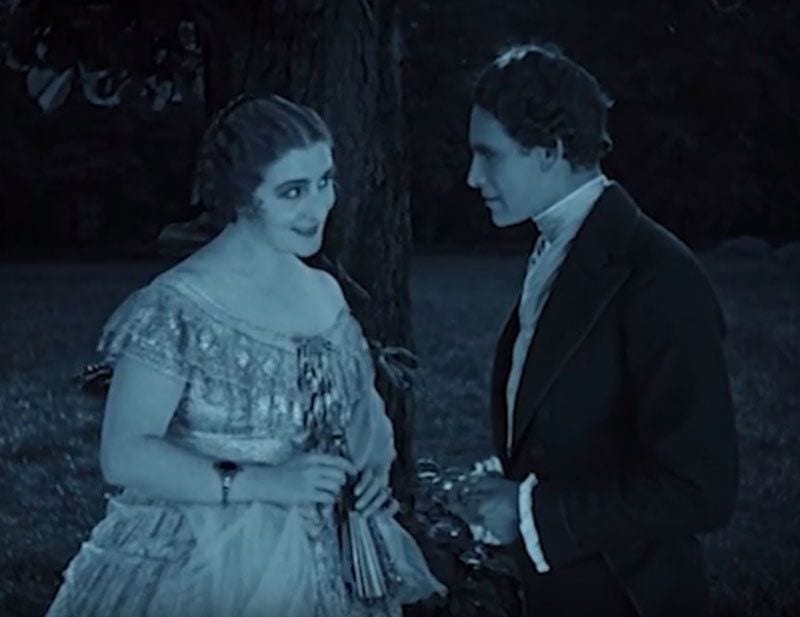 Also appearing in the film are Jakob Tiedtke, Olga Limburg and Alice Hechy as the satirically depicted family of traveling players; Ruth Weyher as the Duchess’ snide handmaiden; and Hermann Vallentin as the strict theatre director. Like Ernst Deutsch, Vallentin was Jewish and unemployable in Germany after 1933, when they were no longer “deutsch” enough for the Nazi racial laws. Vallentin moved to Czechoslovakia and Palestine while Deutsch acted in Hollywood, often playing Nazis under the name Ernest Dorian.

I’ve lived in a world that for 30 years has been performing miracles of restoration such that silent films often exhibit a shot-yesterday clarity, and it never ceases to amaze. As explained in a bonus section and the booklet, the restorers were working from five tinted prints in different countries and were able to compare them with the title cards and sequences documented in the original censor certificate. Despite occasionally visible wear and vertical lines, most of this restoration is shockingly vivid and detailed down to the textures of the shtetl buildings and the Duchess’ gorgeously appointed rooms.

Such clarity is crucial to receiving the impact not only of Alfred Junge‘s production design but of Theodor Sparkuhl‘s brilliant photography, from the early long shot of Pick walking away into the blowing dust to the romantic lighting of the Duchess posing in her open window, or the moonlight garden scene with its fan glittering on the lawn. Sparkuhl is one of the German Expressionist photographers who brought his talent to Hollywood and contributed to film noir. The great Junge relocated to Britain and worked with Alfred Hitchcock before creating masterpieces with Michael Powell and Emeric Pressburger.

And, of course, such clarity allows us to appreciate the subtle gestures and expressions of the actors to anchor their grander moments, such as when Baruch goes into his cramped dim room, looks around at his legacy and future therein, and presses his hands to his breast at the aching fantasy of theatrical glory. Silent film acting had its own style, but it wasn’t the clumsy or broad thing assumed by many people, an impression enforced by faded, jumpy, fuzzy prints before this great era of restoration.

E.A. Dupont, one of Germany’s major silent directors, orchestrates both the overall grandeur and the human intimacy, maintaining that ambiguous emotional tone that hovers between tragedy and comedy, and between the satirical and open-hearted, to keep the viewer on edge with anticipation. Dupont can be seen directing scenes of this movie in a wonderful bonus, the only surviving footage of a 1923 documentary on cinema that also includes footage of Fritz Lang and Robert Wiene. Dupont’s most spectacular success was the circus drama Variety (1925), with its innovative “trapeze” photography. He was among the many Jewish artists who settled in Hollywood, where he finished his career in B films and TV.

Viewers have two options for musical score. Preferable is the “old-fashioned” approach by Donald Sosin and Alicia Svigals, which employs idiomatic Jewish violin stylings and is attuned to onscreen cues of waltzes and such. The other score, by Philippe Schoeller, is less inviting, more modern and internalized and amorphous.

In the booklet of Flicker Alley’s Blu-ray/DVD combo, Cynthia Walk provides excellent context that discusses the film in light of other Weimar films specifically about “the Jewish question”, including the 1920 version of The Golem, in which Deutsch played a supporting role. For example, she points out that the film takes place during a period when Jews in German territories were allowed to marry Gentiles, which is significant for a story that labels itself “a film of the Sixties”, meaning 1860s. In comparing these films’ use of interfaith romance as a problem or solution, her work more than anything will compel readers to want to see those movies, as well.