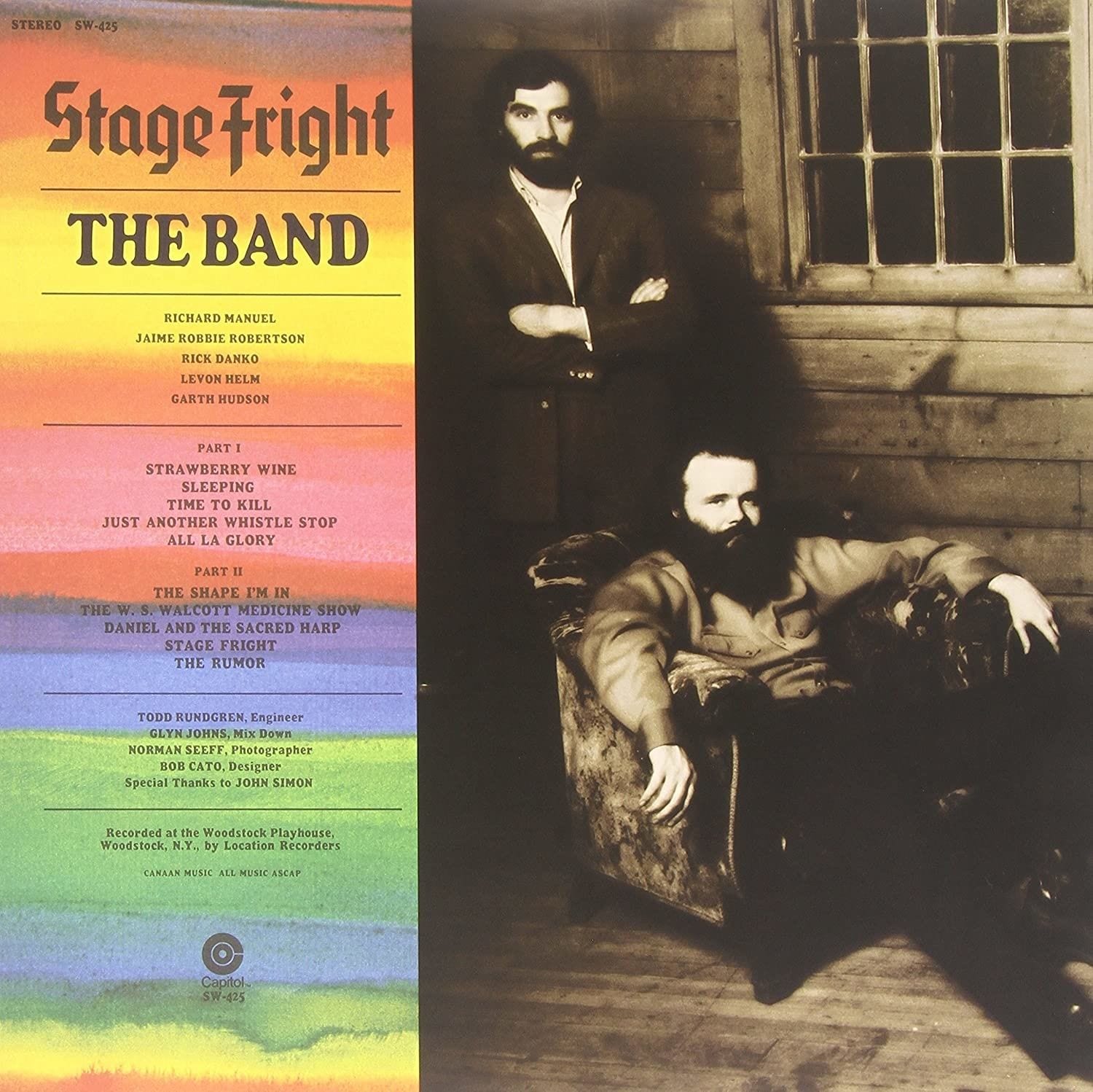 As with any new decade, 1970 ushered in both the promise of fresh prospects and the continuity of the same misfortunes. For roots rockers the Band, it was the latter, as their third studio album, Stage Fright (released in August 1970), conceptualized the trepidation and fatigue they endured. Unlike their previous releases—composed of assured and uplifting jammers—Stage Fright delivered palpable anxiety while exhibiting the Band’s malaise. It was this disquietude that critics strongly opposed when the album was first released. In particular, an infamous Rolling Stone review concludes, “It is an amazing acquaintance, pleasant to be with, even if so far it does not amount to an event on my karma calendar. Later on, it probably will” (Burks, 1970). “Later on” is the key to Stage Fright’s importance. Fifty years later, it is the discontent that carries Stage Fright‘s lasting influence and the Band’s piqued representation of a world braving calamity.

Even before recording began, Stage Fright was fraught with negative energy. The Band intended to create it in front of a live audience at the Playhouse in Woodstock, New York. However, Woodstock’s town council—spiteful from the previous summer’s music festival (which didn’t take place in the hamlet anyway) and fearing the arrival of hordes of young music fans—disallowed the live production. Instead, the Band used the Playhouse as a private recording studio. Closing the curtains to contain the acoustics and converting a cupboard into a control room, the Band recorded in private. Unquestionably, this penetralia enabled the Band to explore their psychologies deeply.

First, though, they had to establish a productive dynamic between themselves and production. For instance, John Simon, whose horns were an explosive contribution to Music From Big Pink and The Band, only appears on “The W.S. Walcott Medicine Show”. Plus, alcohol and drug use were rampant, and the sound quality also suffered. Stage Fright utilized two producers, Glyn Johns and Todd Rundgren, the latter of whom developed a contentious relationship with drummer/vocalist Levon Helm. It’s precisely these flaws that situate Stage Fright as a reflection of the Band’s humanity.

The title track, for example, is a portrayal of anxiety, with the instrumentation building tension around bassist Rick Danko’s already shaky voice. The lyrics reject money and notoriety, choosing instead to wax nostalgic for a simpler life: “They gave this plow boy his fortune and fame / Since that day, he ain’t been the same.” “The fortune and fame” is at once detrimental to his emotional and physical health, but ironically central to his identity, too. He pleads, “Please don’t make him stop / Let him take it from the top / Let him start all over again.”

The paradox of eminence, here for musicians, is at once a driver and stressor. Despite the passion, the result carries the weight (no pun intended), ultimately leading to weariness. An analogous ethos is coursing through contemporary society, and it will certainly grow stronger as the lasting social, and economic effects of COVID-19 and Trump’s failed reign become more apparent. Thus, the Band clarifies that fatigue leads to cynicism (an almost prophetic vision of a society fifty years to come).

Stage Fright also romanticizes disconnection from start to finish. Namely, “Time to Kill” fantasizes: “Gonna bolt the door . . . we take to the nest.” (“The nest” being a secluded residence in the Catskills Mountains.) Likewise, “Strawberry Wine” finds Helm electing to drink himself into a stupor rather than having to deal with actuality. Meanwhile, “Just Another Whistle Stops” mythologizes fleeting success that was once so joyous but is now only acrid. In all these cases, the Band view solitude as the preferable state of being.

“The Rumor” captures the toxicity rendered from scrutiny and the resulting pressure it creates for the individual. Purposely, the Band use Danko, Helm, and pianist Richard Manuel as co-lead singers, thereby demonstrating their collective experience. As such, the lyrics “Close your eyes, hang down your head / Until the fog blows away, let it roll away / Open up your arms and feel the good / It’s a-comin’, a brand new day” serve as a powerful affirmation. That “brand new day” never dawns, yet fragments appear on “Sleeping”, wherein guitarist Robbie Robertson uses sleep to escape to a place where “there’s not a sound, no one to be found anywhere”. Even with the restoration promised by the glory bound train and sleep, the Band mourns the inability to contain the psychic drain. Considering the din of the 24-hour news cycle and ever-present social media, the desire for escape is understandable.

The dissolution continues on “The Shape I Am In“. Written by Robertson for Manuel, the song showcases the extent of Manuel’s despair as he struggled with depression (which was often quelled by substance abuse, culminating in his 1986 suicide). Danko was in disbelief after Manuel’s death, saying, “There was just no sign… I have to think this was just a goddamned silly accident” (Morse, 1986). But, the signs were there, conspicuous enough for Robertson to commit to music. At one point, the lyrics to “The Shape I Am In” elucidate suicide: “I’m gonna go down by the water / But I ain’t gonna jump in, no, no / I’ll just be looking for my maker / Out of nine lives, I spent seven / Now, how in the world do you get to Heaven.” The struggle with mental illness has only recently gained visibility; consequently, Manuel’s tragedy is a familiar and prevailing occurrence.

The pressure of the music industry certainly didn’t mediate Manuel’s struggle or the Band’s overwhelming sense of languor. Specifically, “Daniel and the Sacred Harp” aptly portrays the cost of devotion. Sang by Helm, the narrative depicts a man who acquires a sacred harp by selling his soul. Greed and desire taint Daniel as he willingly accepts the tantalizing harp in exchange for his integrity and innocence. As Helm laments, “He played out his heart just for time to pass / But as he looked to the ground / He noticed, no shadow did he cast.” This is an indelible picture of the Band’s vexations and the subsequent antagonism created by Stage Fright’s production. More so, “Daniel and the Sacred Harp” is akin to a siren’s warning of the modern penchant for instant gratification. As the Band echoes and Daniel’s plight avows, the cost to benefit ratio of success is often disproportional.

Stage Fright doesn’t offer any redemption for the Band themselves; rather, any hope is gifted to their daughters. By December 1970, Robertson, Manuel, and Helm were all fathers to young daughters. As such, “All La Glory” is the album’s emotive underpinning. The instrumentation, especially the Wurlitzer, creates a dreamy quality to the track, suggesting the atonement only exists in non-reality. Helm assures that the emotional collapse, the feeling of being a “second story / feel so tall like a prison wall”, will not transcend to the next generation. For the children, he wishes, “And maybe come some sweet day / You’ll walk that Milky Way”. A similar sentiment is expressed after every school shooting or act of racial violence, whereas the here and now is fucked, the calls to build a safer and equitable future ring clear.

Unsurprisingly, the seismic societal shifts of the past year—nay, the past four years—have reaffirmed the anger and enervation Stage Fright adroitly conveys. If the Band released the album today, its ability to create an affinity in spite of the bitterness would reap acclaim. Stage Fright is a marker of the cultural unrest not yet remedied. As such, the Band’s Stage Fright created solidarity within the detritus.