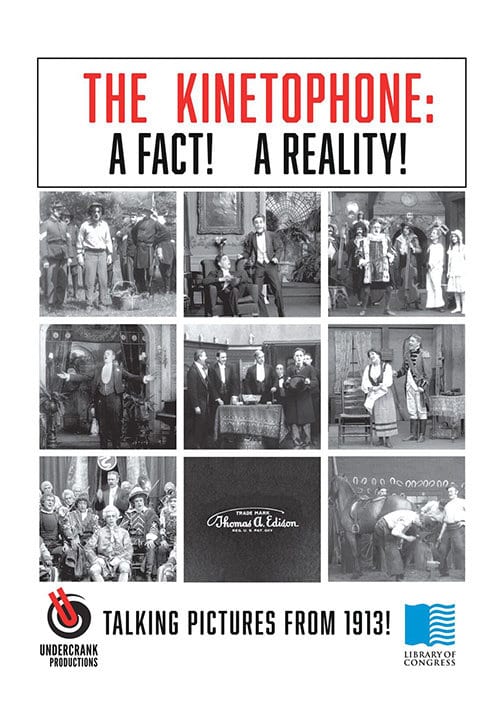 The Kinetophone: A Fact! A Reality!
Various
Undercrank Productions

Today’s digital technology allows us to resurrect and correct a fascinating and forgotten footnote in film history that proved both a dead end and a sign of things to come. This made-on-demand disc, produced by Ben Model’s Undercrank Productions in association with the Library of Congress, offers the startling evidence: talkies from 1913 produced by Thomas Edison.

As we know from such documentaries as the Discovering Cinema DVD, experiments with sound films date from the very earliest experiments with film, and many diverse attempts to present sound films popped up during the more than 30 years that elapsed from the first public showings until Warners’ Vitaphone process offered a workable synchronized soundtrack on the filmstrip itself.

In fact, the earliest surviving Edison film also turned out to be the earliest experiment with sound. The footage consists of about 17 seconds of two men waltzing while pioneering filmmaker W.K.L. Dickson plays a violin in front of a large sound-recording cylinder. The wax recording and the footage survived separately and were never brought together until 1998, when somebody finally made the connection. It was a bit late in the day — by over a hundred years — but we finally knew that what’s now called The Dickson Experimental Sound Film was exactly that, not to mention arguably the first homoerotic movie. 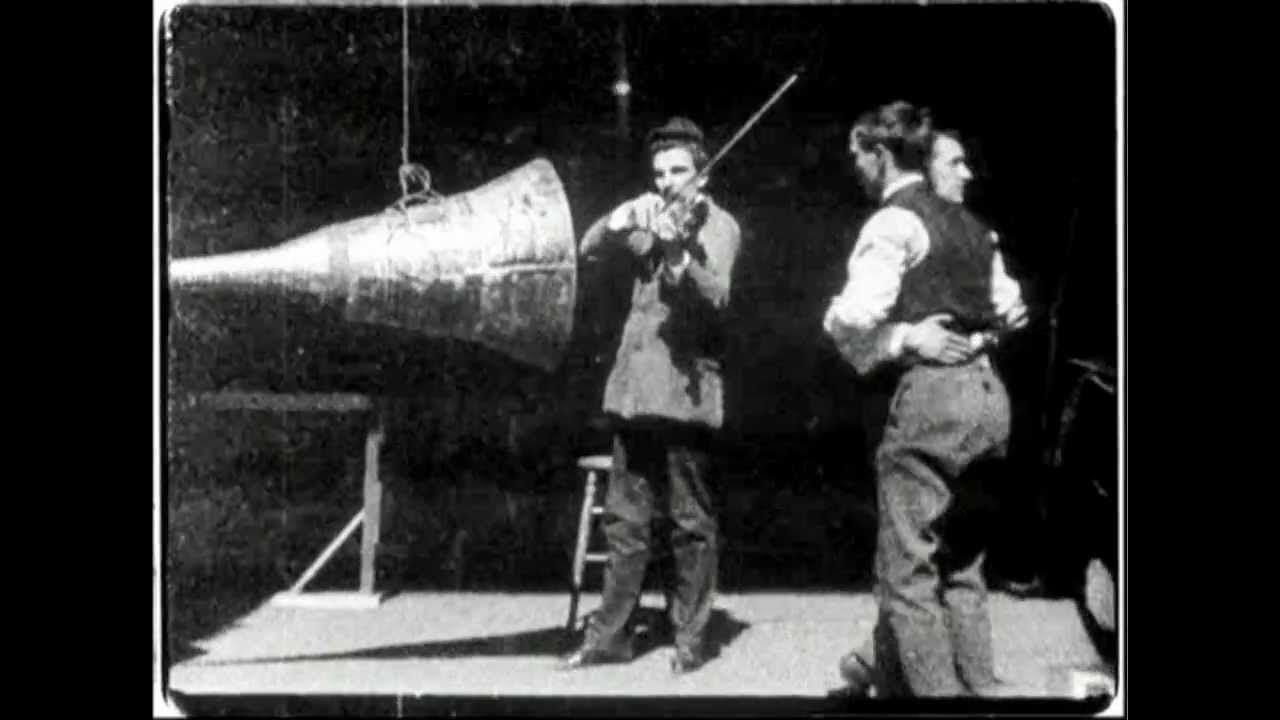 That footage is replayed in the documentary on this disc, in which the Library of Congress’ Nitrate Vault Manager, George Willeman, explains this project. What Edison marketed as the Kinetoscope in the 1890s was a private viewing machine, similar to a jukebox, in which the individual viewer looked into an eyepiece and watched a loop of the film while an appropriate if unrelated cylinder of music played accompaniment. No attempt was made to synchronize sound and image, yet these were forerunners of music videos, in a sense. 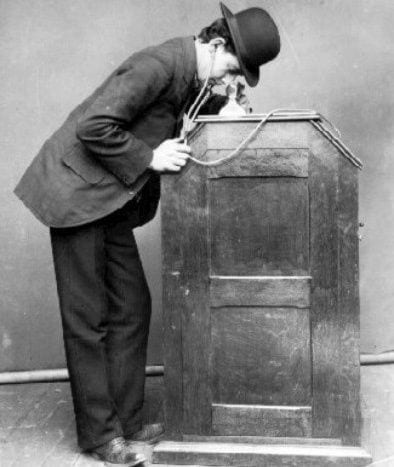 In 1913, Edison announced a breakthrough amid much ballyhoo: the Edison Kinetophone, or a talking picture. The films consisted of brief playlets or vaudevillian musical shows accompanied by sound that was recorded in performance with the photography. The trick was getting the two systems to synchronize during projection, and this problem defeated the process within a few weeks of its unveiling. It was such a complex technical challenge for exhibitors, involving pulleys and cords connecting different machines, that projectionists simply couldn’t handle the constant adjustments created by the set-up. After praise at the sensational premieres, the experiment quietly died. Dozens of such films were made and only a few survive.

The Kinetophones weren’t shown in regular movie theatres but in vaudeville houses as one element in the evening’s program, and that proved a wise venue for what turned out to be an entertaining novelty and a curiosity rather than a permanent attraction. As one Edison employee noted immediately in a letter, aside from the technical issues, the novelty of dialogue wears off after a few showings and the audience begins to expect longer stories and better acting. The simple wonder of hearing people talk is no longer sufficient to pack ’em in.

Willeman explains the process by which, using FinalCut Pro, he wedded the cleaned-up digital print with the existing sound cylinders. Many adjustments were necessary and some problems were unforeseen. One soundtrack was from an alternate British version, with the curious result that we hear the cast singing “God Save the King” while mouthing “The Star-Spangled Banner”. Another problem, which becomes very apparent, is that the nailed-down approach of shooting with sound yielded a static, unbroken shot for the six-minute films, while audiences of 1913 were already accustomed to more fluid and dynamic film language. It was as though the innovation of sound required film aesthetics to yank back to Year One. This problem would reassert itself, if less problematically, in the first few years of real talkies. In fact, early talkies could be dynamic, depending on the filmmaker’s creativity, because the artists were aware of this issue and the technical bag of tricks they’d perfected.

The DVD’s main program consists of eight restored Kinetophones. The first is an excited three-minute speech of introduction and propaganda from the very first public showing. The stuffy speaker, in evening dress, declaims that “the political orator can appeal to countless thousands while seated at his own fireside. The world’s great singers and actors of today can be seen, and heard [cupping his ear dramatically], one hundred years from now. In fact, there seems to be no end of the possibilities of this latest and greatest invention of that wizard of sound and sight, Mr. Thomas A. Edison.” We can imagine the astonished crowd shouting “Huzzah!”

Musical Blacksmiths and Nursery Favorites are musical skits featuring various actors plus four singers, the Edison Quartette, who appear in most of the films. The latter film is a fantasy with a good fairy appearing out of the fireplace and various numbers performed by Old King Cole, Little Miss Muffett, etc. The former film’s irony is that the blacksmiths’ dialogue moans about how new technology — the automobile — is killing their business. We may wonder if the vaudeville artistes backstage had a similar premonition as they witnessed this cinematographic spectacle intruding on their program. Did they see the handwriting projected upon the screen? Did they note the serious technical problems with satisfaction? 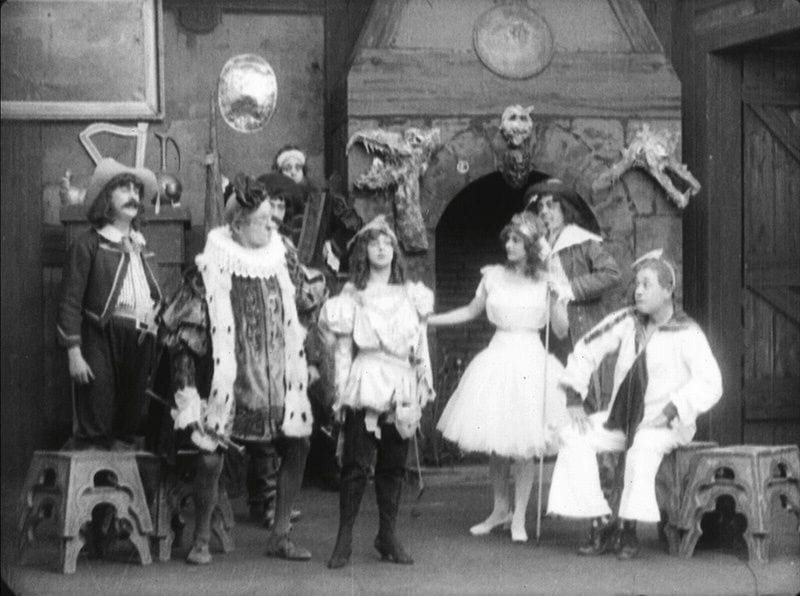 The other musical program is The Edison Minstrels, the film with the accidental British soundtrack. In a snapshot of the dying days of minstrel shows, we see a hybrid program in which all performers are presented as white except for the two flanking blackface characters of Mr. Bones and Mr. Tambo, who tell bad jokes between the traditional songs. The interlocutor is Arthur Housman, who spent the rest of his career playing slapstick drunks.

This film is preceded by a note on historical context stating that such things are hard to watch today. True, and the lame humor and tedious visual aesthetics don’t make it easier. Some people may be disturbed to realize that eras we’d prefer to believe were naïve and innocent were actually full of problems, just like our era, but perhaps the reminder is salutary.

Two of the films are dramas. The most interesting, and marked by very clear sound and image, is The Deaf Mute, one of the era’s flood of Civil War dramas marking the 50th anniversary. This is the only one of the films shot outdoors, and Willeman points out the camera’s shadow and a line demarking the space the actors couldn’t cross while declaiming their lines. After a song by our quartette about marching through Georgia, the plot finds Northern soldiers interrogating a possible spy to determine if he’s really deaf, and it seems to end in the middle of the story. Was there another reel? The plot device of using sounds to test deafness is perfectly tailored to the Kinetophone gimmick.

The Old Guard is the hardest to understand, both because of the noisy track and because the actors adopt alleged French accents in a story about a dying grandfather who was a corporal for Napoleon. After blessing the union of his granddaughter and another soldier, he collapses in barnstorming fashion and, in a very interesting technical touch, Napoleon’s ghost suddenly fades in at the corner. This doesn’t seem to be a mirror trick but an actual superimposition created by rewinding the film, unless it was added in an editing process. This would be possible because it has no effect on the sound recording.

The two farces feature the antics of Edward Boulden, evidently a comical fellow. The Five Bachelors opens with our musical quartette lamenting the fact that their bachelor club has lost a member. “Is he dead?” asks one of the group, who are all clad in black evening dress with vest and coat-tails. “No, married!” is the answer, to general scorn. A new member (the jittery Boulden) is proposed as a certified “woman-hater” but first must be hazed with various slapstick shenanigans, including spanking him with sticks (!) and dunking his butt in a tub of water. Everyone shouts with gaiety, although perhaps not the viewer. On the other hand, this is the kind of thing that produces its best effects on a crowded audience. 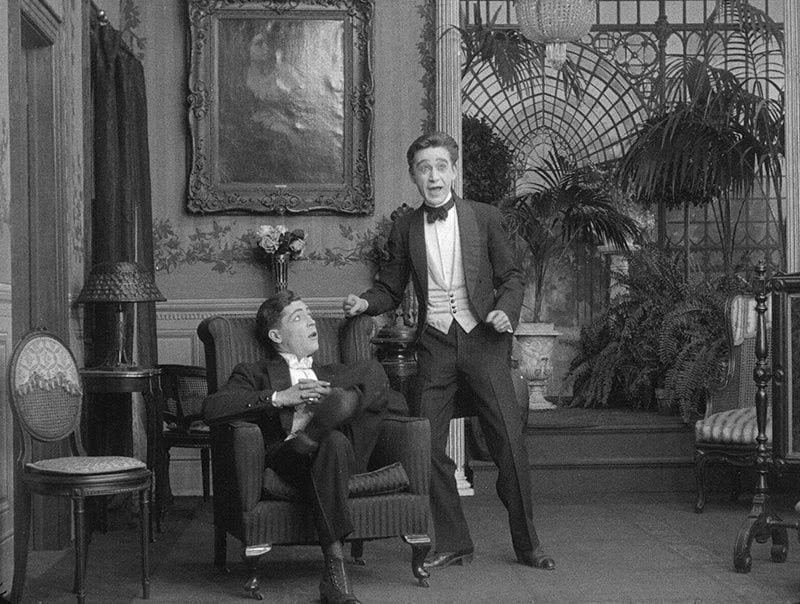 The most amusing item to today’s viewers is probably Jack’s Joke, another comedy mixing highbrow evening dress with pranks that puncture dignity. Jack (Boulden) promises to introduce his college pal (Housman) to Jack’s girlfriend Bess (Nellie Grant). For a merry jape, Jack tells each of them that the other is “stone deaf” and can only communicate by shouting. This premise is particularly suited to the Kinetophone medium, since the actors must fairly bellow their lines already, just as if they were on a vaudeville stage. Unlike the other films, this one seems to be edited into two shots with identical set-ups, the second shot consisting of the actors taking a curtain call, just like in the type of stage skit this resembles.

A bonus film, the humorous The Politician, is offered as an example of one of the many Kinetophones for which the archivists haven’t located a soundtrack. The action is fairly clear as a drunken orator makes a speech from his window and gets stuff tossed at him. Ben Model provides a new score.

Despite some visible damage, the film images are for the most part very clear, sometimes striking. The soundtracks have more notable damage in terms of hiss and such, yet for the most part are easily comprehensible. It’s taken over a century, but we’re now in the early days of restoring this early talkie process into a sensible semblance of what Edison tried to achieve. Perhaps the future will find more Kinetophones calling to us across the mists of time, as political orators address thousands from their fireside. Stranger things have happened.