Recorded well over a century before Homer’s Iliad and Odyssey, the anonymously authored Gilgamesh is world literature’s first epic—detailing battles with monsters, a Bible-paralleling arc and flood, and an underworld-crossing ferryman. Though many of the tropes are familiar, and The Epic of Gilgamesh is a standard on countless college syllabi, Seven Stories Press has released a first-ever comics version—an impressive accomplishment in terms of both words and pictures.

Kent H. Dixon originated the project with his rendition of the Babylonian text—roughly 1,700 words—using the dozens of published English translations, and occasional references back to the original syllabary, to craft his own hybrid prose-verse. At times poetic in form, even with an echo of pentameter (“Abundantly the guts did spill down the mountain’s slippery slope”), his rendering also emphasizes contemporary diction, calling Enkidu a “hairball” and Gilgamesh “big and bad”—and so a good fit for his target audience of undergrads and general readers.

Kent then handed his complete text to his son, comics artist Kevin H. Dixon, who used it as a script, interpreting and adapting freely—but also lettering every word into the graphic novel. Most adaptations might trim as needed, and to that degree the Dixons’ comic resembles Robert Crumb’s word-for-word adaptation of the Book of Genesis. The Epic of Gilgamesh also literally resembles it, since Crumb is one of Kevin Dixon’s many artistic influences. The style is aggressively cartoonish—down to characters’ foreheads spraying drops of plewds when anxious and bursts of emanata when literally glowing with triumph. Crumb is most present in Dixon’s masterfully detailed cross-hatching, and though some of his figures are roughly reminiscent of Crumb too, their anatomy is closer to Matt Groening’s The Simpsons. 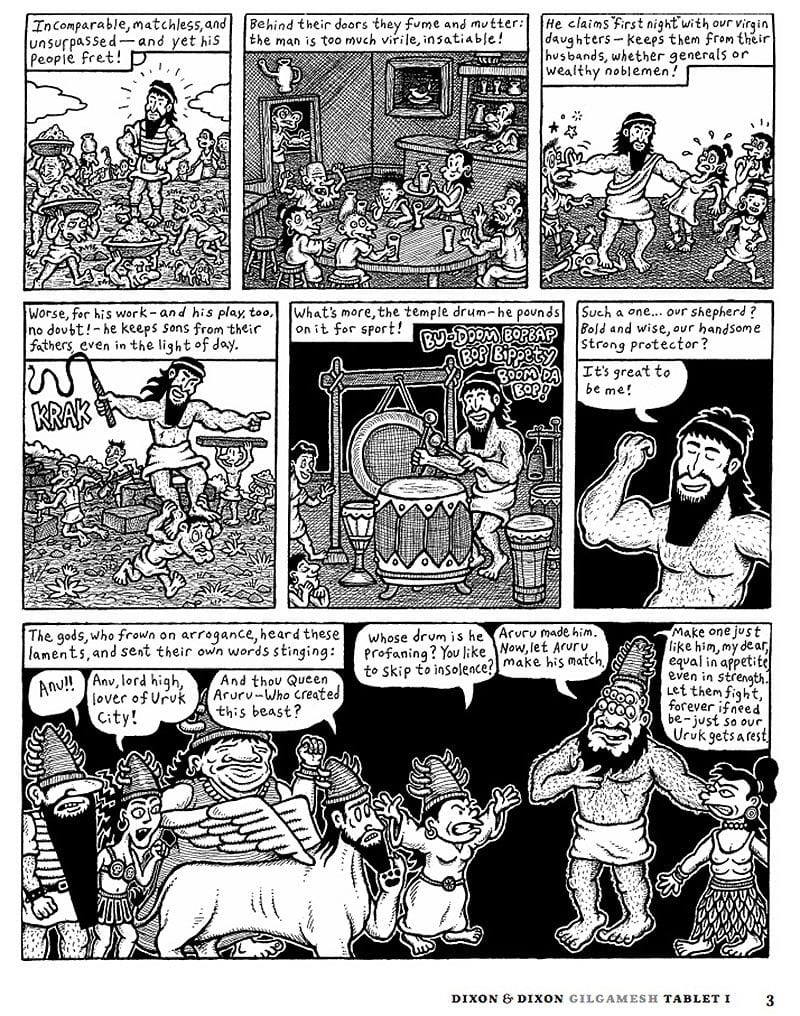 It’s tempting to read Gilgamesh and his sidekick Enkidu as world literature’s first superheroes—a dynamic duo of demigods who possess a litany of super-powered traits: chest as broad as an ox’s, speed of a shooting star, an itch for performing extraordinary deeds, even prayers to the god of justice. But the epic’s opening supervillain is Gilgamesh himself: a power-mad king literally raping his people. Enkidu may be closer to a superhero since he’s created in answer to the people’s prayers for a savior. But despite his good intentions, Enkidu is no match and soon is submitting to Gilgamesh too.

But maybe that was the gods’ secret plan, since Gilgamesh stops abusing his kingdom and instead teams-up with his near-equal for death-defying adventures. For no reason but want of glory, they head off to battle the monstrous Hambaba and return with his head and a forest of cedar trees. Even here, Hambaba—despite Kevin Dixon’s abundantly monstrous depictions—seems almost like a victim, a guardian of a beautiful natural landscape plundered by invaders. At least when the goddess Ishtar, furious after Gilgamesh rejects her sexual advances, releases the Bull of Heaven onto the kingdom, the heroes’ violence is protective and so actually heroic.

Still, after Enkidu’s death, Gilgamesh is sincerely heart-broken, but his attempt to reach the underworld isn’t about releasing or even visiting Enkidu’s soul. It’s about securing immortality for himself. While that mission is unheroically self-serving, it also ends in failure—a paradoxical victory for the forces of good, since Gilgamesh, though now permanently depressed, also seems to have finally accepted his role as a just and noble king. 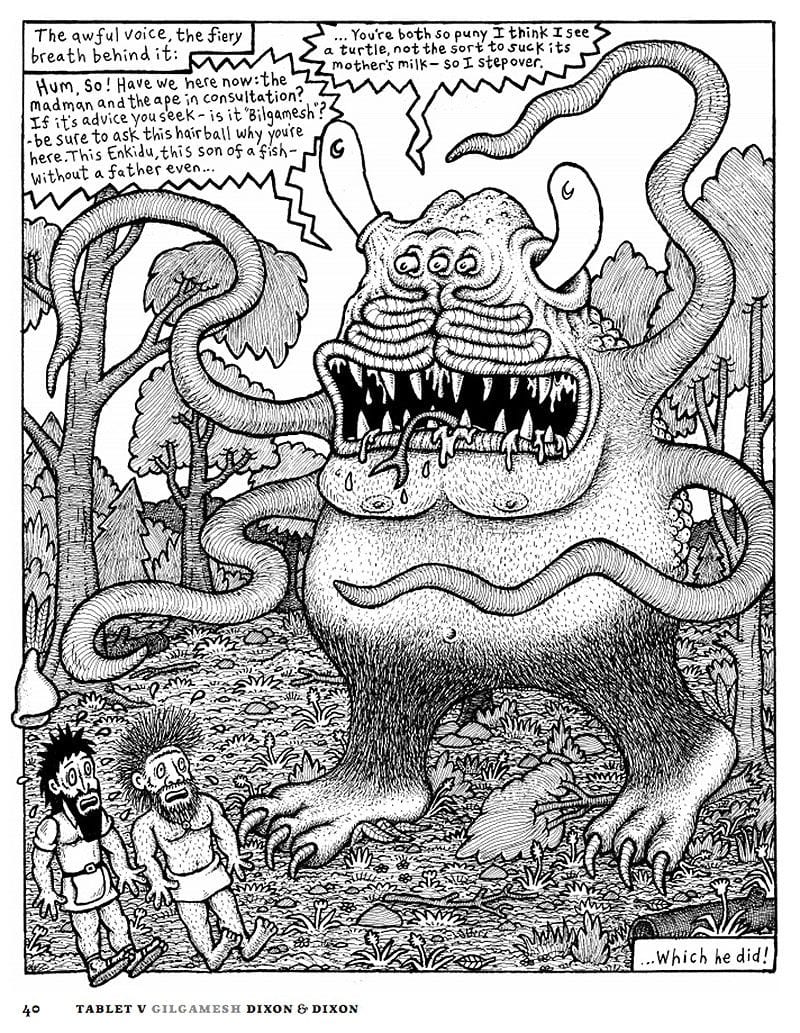 Kent Dixon credits his son for adding “fun and insights” to his text. That entails a wide range of very specific choices made panel by panel. Kevin Dixon sometimes defaults to what pioneering comics scholar Scott McCloud terms a “duo-specific” relationship between words and pictures. For example under the caption “Your statue, he will set at the left of his throne: all the princes of the world will kiss your graven feet,” Dixon renders exactly that, creating necessary details to visualize the words’ meaning, but to a redundant effect. When the text states that Urshanabi ran “striking his head with his fist”, Dixon adds a talk bubble “Nooooo!!” but the image otherwise repeats the caption.

His art is more engaging when it instead interprets the accompanying language. When the “revels ran late into the night”, Dixon draws Gilgamesh with a pot on his head and Enkidu passed-out and dreaming of urinating—images that fit the otherwise generic “revels” by expanding them with greater visual specificity.

Some interpretations even playfully contradict what’s presumably the text’s intended meanings. When a god warns that “You will have the legions of the dusty dead sitting down to dinner with the living,” Dixon draws a zombie attack, even adding his own talk bubble content: “No! Grandma, don’t! Aughh!”

More fun still, Dixon regularly adds visual content to expand Enkidu’s character. When “Before the alter of Shamash they laid the offering, placing the heart on top,” Dixon’s Enkidu exclaims “Yum!” And when “they went down to the Euphrates; they washed their hands”, Enkidu dives in head first.

Sometimes the art contradicts too—though not to any clearly communicated effect. When “back through the town they road, knee to knee and thigh to thigh, hand held high in hand”, Dixon’s heroes’ knees and thighs are not touching.

It’s perhaps not surprising that this father-and-son partnership does not emphasize the homoerotic elements of world literature’s first seemingly gay couple. The language remains extremely suggestive, with Gilgamesh dreaming that “I felt love” for a shooting star and then “was embracing it as one would a wife!” His goddess mother explains the he will receive her “blessing as if it were a bride—a bride indeed I see, a companion for my son” whom he will love “as never have you loved before”. Kevin Dixon, however, avoids any homoerotic elements in his art. Even though Enkidu should be naked during his opening sequence, Dixon draws him in a loin cloth.

Though his father describes the epic as containing “adult content”, Kevin draws only one, unerect penis, and though the goddess Ishtar invites a gardener “to touch here my slit, cleft like your dates of the willowy palm”, he angles her inside a wagon to avoid drawing her vagina. And even though Enkidu and the holy harlot Shambat “coupled for a week”, most of the details are obscured by an action cloud more typically used for cartoon fight scenes. 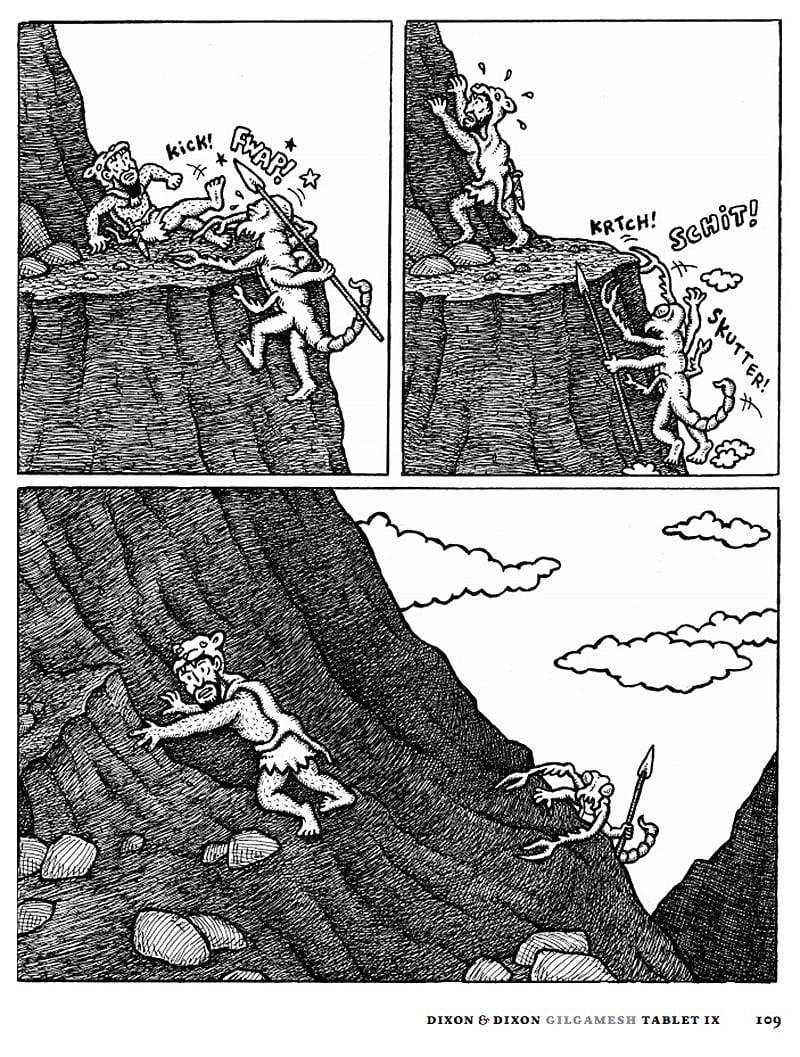 But Dixon may be at his comics best when working with very few or no words at all. Though the epic is often heavy with language and his captions and talk bubbles crammed with text, the adaptation also includes a nearly wordless eight-page sequence when Gilgamesh travels to a gate to the underworld guarded by scorpion men—images I assumed Dixon invented freely until I read their description in the text. Dixon extends the underworld river crossing similarly though more briefly, but most of his visual expansions fall in more obvious moments: Gilgamesh and Enkidu’s fight scene, and Gilgamesh’s fight with two lions.

Dixon scolds himself in his introduction for drawing the middle of the epic first, resulting in slight changes in Gilgamesh’s rendering as he fine-tuned the character. But more jarring, he also alters his layout style, drawing the middle section with fewer panels and much larger lettering in contrast to the opening chapters. I also wish he had selected some style variation, either in panel content or panel framing, to indicate imagined and dreamed images, something the epic includes in abundance. Kevin Dixon even adds a chapter-long dream sequence to the end with his own interpretation of an often-deleted section believed to have been added after the original composition.

These challenges aside, the Dixons’ adaptation has earned its rightful place on college syllabi, replacing its dozens of text-only predecessors, none of which offer the range of playfully inventive visual effects only possible in the comics form.