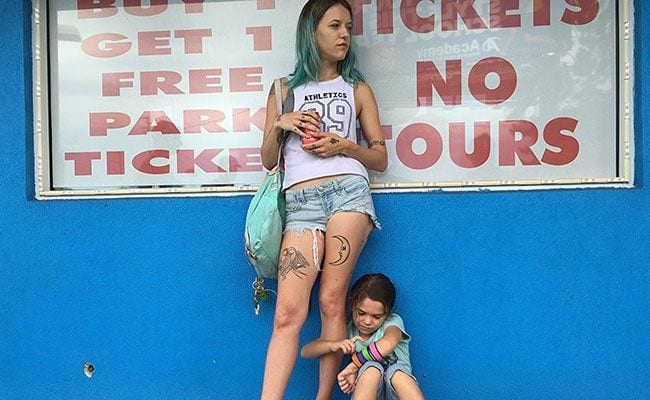 Yes, much of what you read about Sean Baker’s killer movie The Florida Project (viewed at the New York Film Festival 2017) is going to concern what a knockout performance it has from the absurdly entertaining Brooklynn Prince. That sort of thing happens every few years during the awards season, and yes, that means there’s a small chance that next year we could be seeing a very nervous and giggling Prince accepting an Oscar while Nicole Kidman and Meryl Streep try not to glare at her from their seats. But here’s the good news: While Prince deserves pretty much every bit of praise that will come her way over the next few months, she’s not all there is to this movie. Baker is probably one of the top five American directors working today, and The Florida Project is a testament to his talent.

Prince plays Moonee, a six-year-old insurrectionist living in a down-at-heels hotel where she bombs around the place with whatever cohorts she can rustle up for the day’s mayhem. At any given moment, she and her friends Scooty (Christopher Rivera) and Jancey (Valeria Cotto) might be hawking spit bombs onto a car, scamming change from strangers for ice cream, or hurling rocks through windows in a nearby cluster of faded pastel abandoned tract homes. Her mother, Halley (Bria Vinaite), isn’t the overly watchful or nurturing kind (“I’d make something but Lunchables are, like, a dollar”). She lets Moonee run loose so that she can focus on more important things, like getting high with Scooty’s mom Ashley (Mela Murder) and starting fights.

Overseeing the chaos with a tired grin is the manager, Bobby (a surprisingly gentle Willem Dafoe), who lets the residents get away with more than he’s technically allowed to, but doesn’t sweat the details. “We love you Bobby!” an unseen resident shouts at him after he grumblingly fixes the electricity to much applause. “I love you, too!” He shouts back at a point just above the camera, his grin registering both yeah-yeah-yeah brusqueness and genuinely touched happiness. When he runs off a creepy lurker taking too much of an interest in the kids, it’s as though the guy were coming after his family.

Bobby keeps an eye on the kids, particularly Moonee, because he knows nobody else is. It’s easy to get sucked into this escapist dream that Baker concocts for them in the movie’s early stretches as they tear around the place. He entices viewers to see it all through the kids’ eyes, whether pumping up “Celebration” on the soundtrack or having them excitedly dash off to find the end of the rainbow arcing over the hotel. But as he did in Tangerine, whose characters kept substituting conflict and chaos for living, all that intoxicatingly free play engineered by Moonee’s rebel impulses just masks the cold reality that it’s only a matter of time before Halley’s cons and adolescent fights will push the two of them right off the edge into even more abject poverty.

The world of The Florida Project, though pitched in the trailer as almost an idyll, is ultimately a harsh one where people survive hour to hour, day by day. Their faded teal hotel, with its weekly rates and transient residents, sits somewhere on the outskirts of Disney World. This is just close enough for the park’s fantasyland aura to make everyday life in this faded strip-mall landscape seem just a hair more surreal, but far enough away that all the families living in the hotel are kept ever aware of just how far away they are from the American Dream. Even the gorgeous cinematography, with its dusky sunsets and bright primary colors, plays up this fantasy world just around the corner from this grimier reality.

Less fluid and combative than Tangerine, which sometimes seemed to consist of one continual argument, The Florida Project shows more of Baker’s storytelling and comedic side. (He gives a nod to his work writing on the cult comedy Greg the Bunny by showing a clip of it on the TV in one of the hotel rooms.) But that arguably more conventional approach doesn’t result in any less impactful a story. The Florida Project is an adventurous, hilarious, neon-colored, and occasionally horrifying ride through a forgotten corner of America where one girl hasn’t gotten the message that she’s supposed to give up hope.