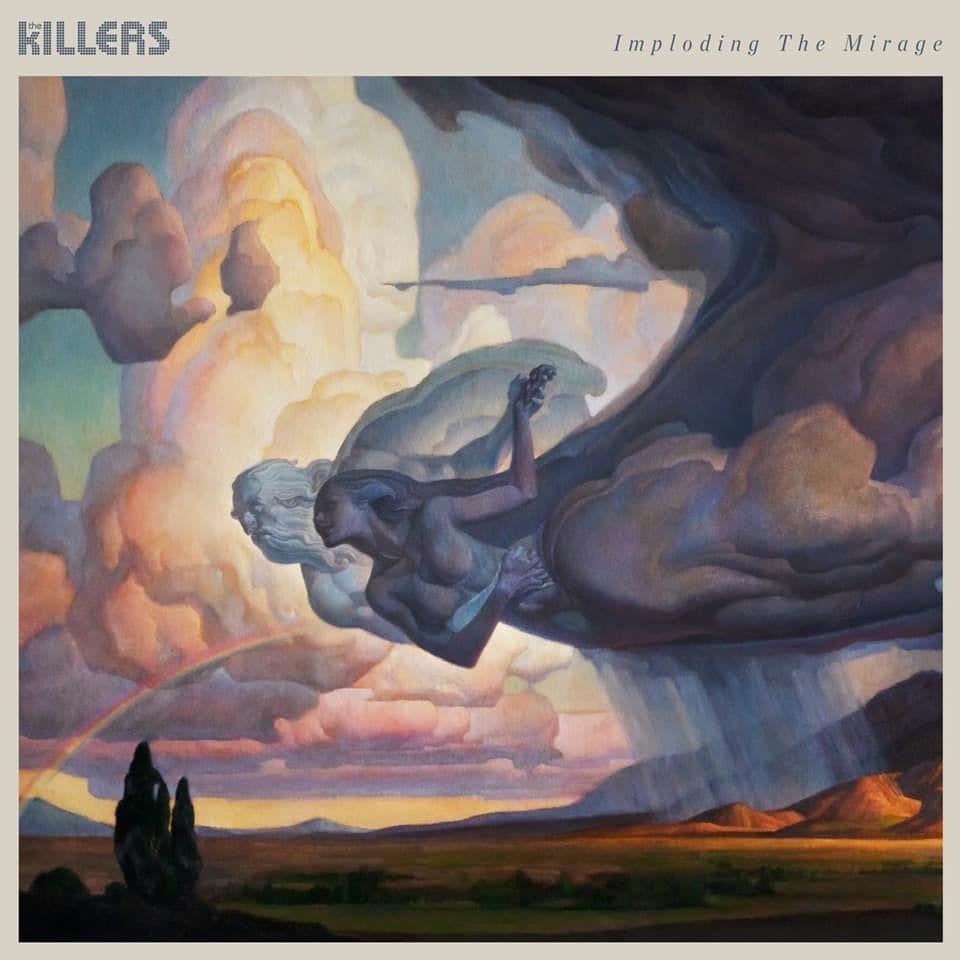 Leave it to Las Vegas to market implosions. The high frequency in which implosions occur in the city relates to the need to renovate and update infrastructure. Doing so supports the hordes of tourists, maintains the Vegas panache, and turns demolition into a spectator event. Hotels in particular, excluding the legendary Mirage, most frequently undergo controlled demolition. Although their sixth studio album was recorded in Utah, the Killers, originally formed in Vegas, found inspiration in the city’s race with modernity. Released after a lengthy delay caused by COVID-19, Imploding the Mirage promises dynamite rock ‘n’ roll yet delivers tepid synthpop. Whereas the album marginally reinvents the Killers’ sound, the lyrics problematically redesign archaic ideology.

Frontman Brandon Flowers‘ spiritual beliefs are apparent throughout the album. As a devout member of the Church Jesus Christ of Latter-day Saints, it’s unsurprising the Killers’ devote musical space to religious ideology. Realizing overt references would likely alienate their audience, the religiosity is interpretable. On “My Own Soul’s Warning” and “My God”, the religious references are readable as existential crises. The former’s chorus specifically evokes the dichotomous reading: “Cutting up the nights like a goddamn knife / And it got me thinking no matter how far / I just wanted to get back to where you are.” The ‘you’ is never fully explained. Yet later in the song, it becomes obvious that Flowers is referring to a divine entity rather than lost love. For Flowers, it is a deeply personal reflection of his connection to spirituality.

Moreover, the Killers repurpose specific Biblical verses. “My Own’s Soul’s Warning” uses the lyric “out of the whirlwind”, a reference to the biblical scene in which God enables Job to see beyond his plight. Likewise, “My God” utilizes language from the book of Luke. Evident when Flowers sings, “Wipe the dust from my eye / Wash my feet with your tears.” Biblically, the passage is a description of female humility and subordinacy. Using deferential language to describe women creates an unacceptable power imbalance. Unfortunately, Imploding the Image frequently perpetuates misogyny.

The Killers have a penchant for portraying tragic women. “Blowback” and “Caution” feature the same archetype: a woman stagnated by her social class. Her “white trash” upbringing is emphasized without consideration of the nomenclature’s offensiveness. She demonstrates ambition, but the circumstances relegate her desires as mere fantasy. This is an overwrought trope, as archaic as it is problematic. The lack of agency is trite while situating women as passive victims of circumstance is oppressive. Even more frustrating, “Blowback” and “Caution” get close to subverting gender norms without fully manifesting. “Blowback”, for example, suggests “she’s gonna break out, boy you better know that / It’s just a matter of time.” That ‘time’ doesn’t happen on Imploding the Mirage.

The Killers, and Flowers especially, are not known for their subversion. In case the rigidity of gender and social norms associated with Mormonism is forgotten, “Dying Breed” is a clear reminder. The song situates Flowers, and seemingly his wife, as the last guardians of heteronormativity. When “everyone’s compromising”, they are unwavering from their belief in the gender norms maintained by institutionalized marriage. When Flowers sings, “I’ll be there when water’s rising / I’ll be your lifeguard”, he restates the previously mentioned lack of women’s agency, then position himself as the dominant male. Yet Flowers doesn’t engender the heroic alpha male he believes himself to be. Instead, he is more akin to a confused boomer who realizes his values are outdated and society has progressed without him. These lyrics are troublesome when considering the recent allegations of sexual misconduct stemming from 2009. Supposedly no corroboration was determined, but perhaps Flowers is preparing to absolve himself of any wrongdoing while casting judgment towards his crew.

Imploding the Mirage‘s highlight is the cadre of big-name performers enlisted as the Killers’ backups. Fleetwood Mac‘s Lindsey Buckingham appears on “Caution” and k.d. lang carries the bridge on “Lightning Field”. Weyes Blood and The War on Drugs Adam Granduciel also lend their talents. The album is produced by Jonathan Rado of Foxygen and Shawn Everett returns after his work on 2017’s Wonderful, Wonderful. Rado’s influence, in particular, is evident on the funky “Fire in Bone”.

Their contributions are notable but don’t recover the album from the departure of longtime guitarist and co-founder Dave Keuning. In his place, the album teems with keyboards and synths, giving Imploding the Mirage a bombastic electropop sound. An element discernible in previous records but often mediated by Keuning’s musicianship. The album soars with anthemic songs, amplified vocals, and booming crescendos, obviously produced for arena shows and not for individual consumption.

It was in Wonderful, Wonderful that the Killers provided moments of engaged considerations of masculinity and mental health. When the Killers’ have thoughtfully contributed to contemporary discourses in the past, it’s puzzling why Imploding the Mirage album is so regressive. As such, the closing title track is evermore cringey. Here Flowers uses mundane euphemisms to illustrate a visit to a prostitute ending in premature ejaculation. A fitting conclusion for an impudent album.