There’s something about The Reincarnation of Peter Proud that keeps it lodged in the memory like a nasty splinter. I first saw it on a commercial broadcast so censored and dark that it couldn’t make much impact beyond its ending, but that ending is unforgettable. As archetypal an example of the mythological and psychological concept of the “eternal return” as you’ll find in cinema, the finalé orchestrates events into a helpless flow that, in retrospect, can only feel right, had always felt right, will always feel right.

It’s impossible to discuss the film without addressing that ending, for this is among those rare movies entirely made by their end, as if they’d been working backwards from that point. We can’t help it, so this whole review may be a kind of SPOILER. Maybe it’s even a spoiler to discuss the beginning.

In dreams begin responsibilities, and often movies. A naked man, at night, dives into a lake and sluices across the water toward The Puritan Hotel, a loaded name for any bare pilgrim. A tearful, fearful young woman in a rowboat emerges from the fog to meet him. His head floating in the black water, the man calls her Marcia and apologizes for what he just said, explaining that he was drunk and didn’t mean it, that he loves her. She bashes him with the oar and he sinks to the bottom. He’ll never make it to the glittering promise of the Puritan, but wasn’t that an earthly delusion after all?

All this time, amid the flurry of disorienting jump cuts, the water and night and nudity and violence, Jerry Goldsmith‘s score orchestrates a nervous, modernist sound that will haunt this entire slow-burning movie as its hero follows a path that spirals in upon itself like a whirlpool.

Peter’s been haunted by these vivid recurring dreams for months: always a festival of jump cuts starring pretty women, lavish consumption, a snazzy car, and insistently phallic landmarks: posts, spires, gables. After false starts with various medical professionals, Peter comes to believe he’s reliving snippets of a previous life from somewhere in 1940s Massachusetts, and he sets off, as the era’s phraseology had it, to find himself. Disappointed and fed up, Nora leaves him by saying she hopes he’ll find what he’s looking for — “Or do I?”

Let’s pause to consider this Peter and his phallic world, and let’s start with his name. He mocks it himself as a “nursery rhyme” name, which is a nice bit of misdirection from what’s actually a name befitting classical allegories like Everyman or Pilgrim’s Progress, both of which are relevant here. The pilgrim comes to Massachusetts, like Pilgrims before him, where he discovers that his previous self should really have carried the allegorical moniker, for that’s the incarnation who embodied Pride as well as Lust, Greed, Anger and a few more deadly sins. Does Peter carry their residue within himself and his own quest to put his nightfall demons to rest? To quote Bugs Bunny, “Mmm, could be.”

Peter’s a handsome, sexy young history professor at a California college. The even more handsome self he dreams (played by male model Tony Stephano), turns out to be the late Jeff Curtis, a much more ordinary name with a very ordinary string of entitled masculine vices. After distinguishing himself as an athlete and war hero, Jeff marries up into the town’s banking echelons, thus taking advantage of Marcia’s love against the better judgment of her reluctant father, a literal town father. While she’s pregnant, Jeff sleeps around. His violent death acts simultaneously as Peter’s birth trauma. 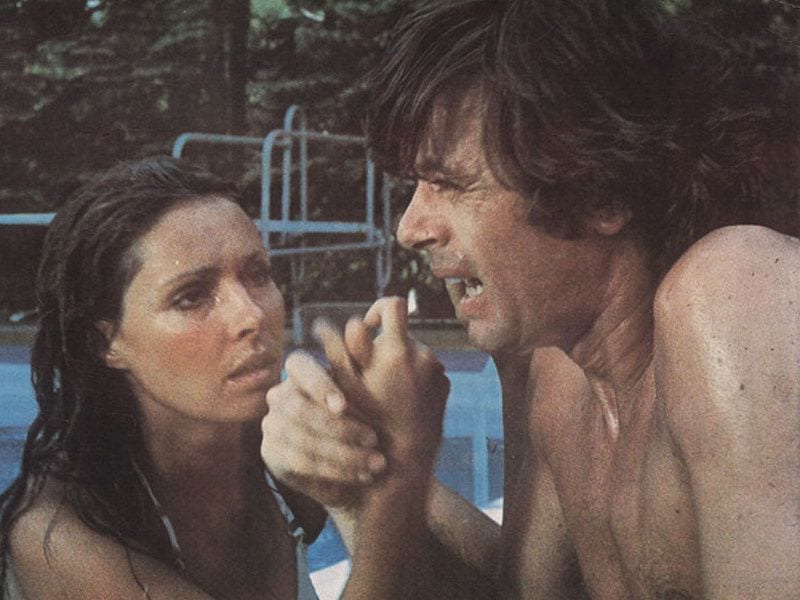 In more than one sense, Kidder and Marcia are the movie’s secret weapon. She’s always been the driving force while Peter or Jeff, believing themselves in charge, rush unwittingly towards her. Except for the flashbacks, Marcia appears in haggard, grey-streaked, crow’s-feet makeup as an alcoholic, wounded, suspicious, vulnerable middle-aged slattern who’s been periodically institutionalized and tries not to leave the house or stray from a half-full glass. It’s a tribute to Kidder that she’s convincing, even though she’s slightly younger than the actress playing her divorced daughter! 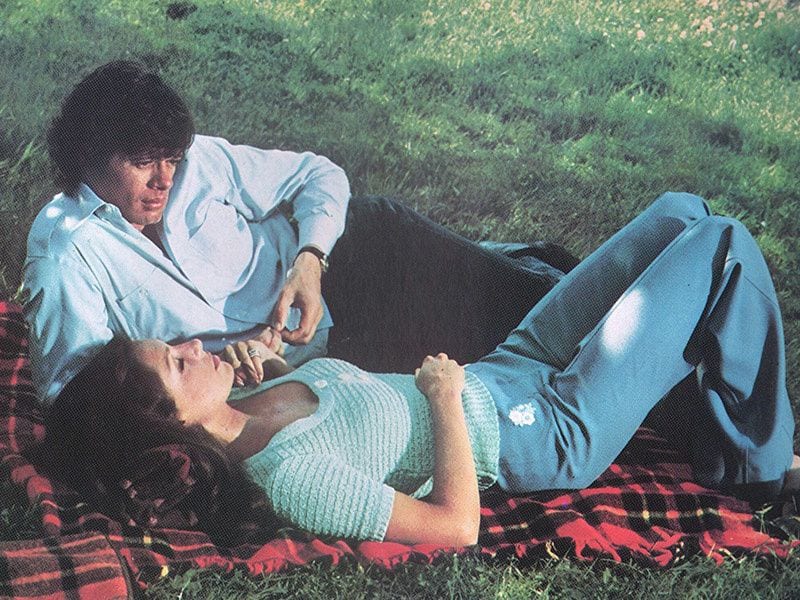 That daughter, Ann (Jennifer O’Neill), becomes the complicated object of Peter’s attraction as he inveigles his way into the family. His growing feelings for her finally derail his drive to uncover “the truth” that’s brought him this far into a frankly impossible situation. Will the truth set him free or doom him? More pertinently, is it possible that both options are the same, that doom could be a form of freedom?

I can’t help thinking that writer Max Ehrlich, in adapting his own novel, must have been minded of the classic labyrinthine horror film The Seventh Victim (1943), produced by Val Lewton and directed by Mark Robson, that’s wrapped around the Holy Sonnet from John Donne: “I run to death, and death meets me as fast, and all my pleasures are like yesterday.”

This new Blu-ray enthusiastically proclaims a “brand new HD master from a 4K scan of the original 35mm negative”. Regrettably, that’s not quite the same as blowing outsized cash on frame by frame digital restoration, and viewers will notice two or three persistent vertical scratches down the middle of the image for most of the first reel. It’s unfortunate to think this must be part of the negative, and it must be taken as character, a reminder of bygone days when films were run through projectors.

Even with these blemishes, Victor J. Kemper‘s photography reveals a rich 1970s grain, particularly lush on the forest greens. He and director J. Lee Thompson adopt a classical stance punctuated by many graceful dollies forward and continually garnished by Michael Anderson‘s moments of frenzied subjective editing. The editing transitions demonstrate how to give a sense of propulsion to what, in other hands, might be a stagnantly paced story; either sound or image are continually pulling at us, like fate. The art director is the great Jack Martin Smith, who contributes a warm, lived-in contrast between Massachusetts Gothic, busy California modernism, and the idealization of an elegant past.

The commentary by historian Lee Gambin is a cinephiliac’s dream of motormouthed, Tarantino-esque free association in which he gabbles about a thousand other movies, giving the impression that he never saw a film he didn’t love. While this doesn’t leave much room for detailed analysis or production research on the film at hand, it’s entertaining and touches on several relevant tangents.

One such theme is the wave of reincarnation or possession movies in ’70s-era pop culture, from On a Clear Day You Can See Forever (1970) through The Possession of Joel Delaney (1972) and The Exorcist (1973) to Audrey Rose (1977) and Magic (1978). By bringing up the fact that Vincente Minnelli directed both On a Clear Day and the earlier reincarnation comedy Goodbye Charlie (1964), we’re reminded of an earlier film about the chastening of a womanizer, also via water; I find that an inexplicably under-appreciated movie that would make a good double-feature with The Reincarnation of Peter Proud.

Gambin also notes that Thompson made a previous horror film with occult elements, Eye of the Devil (1967). The name-drop reminds me how that film was oh-so-slightly ahead of its time while carrying the aura of Old Hollywood in the presence of Deborah Kerr and David Niven, and more importantly, how its masculine figure, like Peter Proud, becomes trapped in a plot whose inevitability is signaled in the first ten minutes and whose destiny began before his birth. Their fateful arcs may be the opposite (or rather the complement) of the inevitable success stories of Thompson’s more well-known action adventures. In either case, the results are pre-ordained. Somewhere in the middle are his exercises in suspenseful ambiguity in which nobody’s outcome seems guaranteed, e.g. Tiger Bay (1959), Cape Fear (1962) and Return from the Ashes (1965).

Gambin’s most effective comments derive from his personal association with Kidder, whom he recalls interviewing at length years ago and meeting a few times since. While rightly praising her performance in this film, he discusses some of her background, her political commitments, and her pleasure in Brian DePalma’s Sisters (1973) and Bob Clark’s Black Christmas (1974). He says that when he got the gig for this commentary track, he asked if she wanted to participate; she declined but “was touched”. Gambin recorded this track, of course, before her recent death, yet it serves as a fitting tribute.

His other most relevant remarks concern Goldsmith’s score. He observes that there are two occasions when the claustrophobic, insistent modernism suddenly “breathes” and “opens out” into refreshment and fulfillment. One is during a love scene. To spell it out further, the last occasion is that ending, when the music once again resolves into romantic ecstasy in seeming emotional contradiction of the onscreen events. 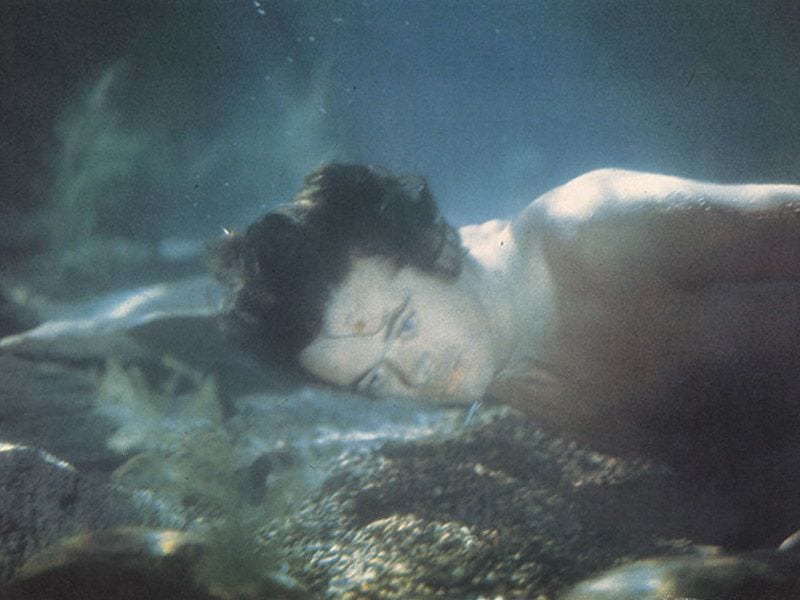 I see that after warning you that this review would give so much away, I’ve actually left out quite a lot. So much the better.

By James A. Cosby / 15 August 2022
Culture/Featured: Top of Home Page/Features/Interviews/Music/Podcasts

By James A. Cosby / 15 August 2022
Culture/Featured: Top of Home Page/Features/Interviews/Music/Podcasts