The whistle of the wind fills the night air until the mournful cry of Gideon (Dylan McTee) rings out as he takes his stillborn baby from Lizzie and holds it in his arms. Words are not spoken by Lizzie (Caitlin Gerard) and her husband Isaac (Ashley Zukerman), or their neighbour Gideon. The image of her white night-dress stained with blood sets the stage for an unnerving and tense 86 minutes. The feeling is heightened when the screen cuts to black and the film’s title appears on screen, accompanied by a screeching piece of period instrumental music, the visceral sound of strings and woodwind.

It is the late 1800s on the American frontier, Lizzie and Isaac find themselves joined on the prairie by new settlers out of Illinois, Emma (Julia Goldani Telles) and Gideon. While they help their new neighbours to make preparations to survive the winter, they find this new couple strange. Tragedy sees Gideon return to the city, accompanied by Isaac, who sets off to replenish supplies. Lizzie who is still struggling with the loss of their stillborn baby, is left alone for days on end.

Director Emma Tammi and writer Teresa Sutherland’s
The Wind (2018) is a quietly impressive film, an example of genre cinema that shows thoughtfulness and an interest in ideas, while the suspense, at times nerve tingling, is never discarded for cheap scares. What is striking about this film is that it succeeds on parallel levels, from the aesthetically pleasing cinematography to an engaging and simple story that leaves room for the audience to choose just how deeply they want to engage with Lizzie’s story. While it works as an ideas piece, The Wind superficially satisfies.

There are shots and sequences that evoke the impression that Tammi understands how characters and the landscape are independently and jointly framed in the great works of the western genre. Her directorial eye appreciates that in one regard, a film is a series of images and nothing more. But again, she achieves this with a simplicity. Absent are shots or sequences with a grandeur. Everything here has an effective simplicity that coalesces into a quietly impressive film. 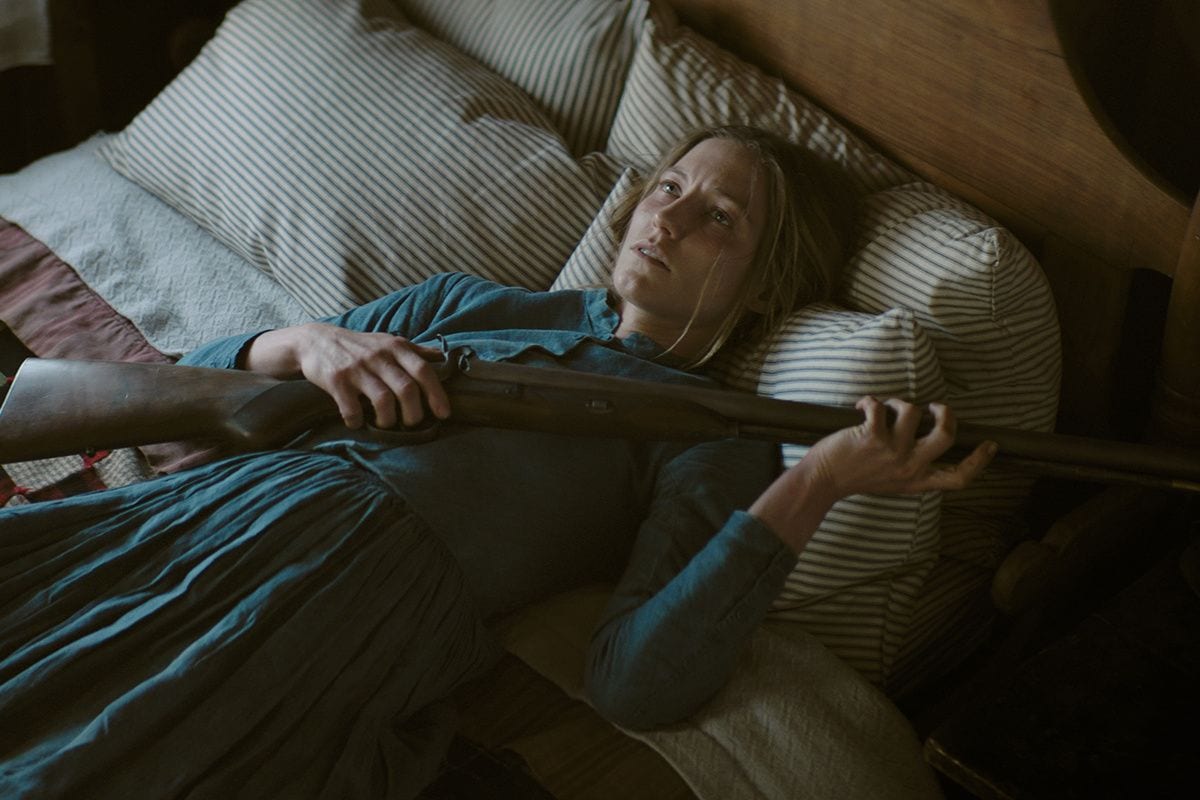 The success of The Wind is that which all stories aspire to – a harmonic balance. Tammi and Sutherland strike that balance between the character-driven moments and the supernatural set-pieces. Neither character supersedes the other; their roles a supportive and reciprocating relationship. Indeed, the characters emotionally anchor the set-pieces while the supernatural effects apply pressure and present danger to Lizzie that in strength, weakness or despair, deepens our connection to her.

The wind stirs the emotions as we witness Lizzie’s plight, and leaves us with a sadness as the last image fades to black. We are left with only the haunting memory of the experiences we shared with her in her isolation, and a sadness at the cruelty that befell her.

The landscape of the American frontier is one marked with mysticism – the traditions of the Native Americans and their spiritual beliefs preceding the arrival of white settlers and their westward expansion. In The Wind we see only a barren landscape and the lonely life of those who settle out there. For Tammi and Sutherland, this land is a blank canvas upon which to explore themes of the origin of the supernatural and folklore. Emma tells Lizzie, “This place is funny you know, plays tricks on your mind.”

The Wind confronts us with questions, where an opinion matters if we are to fully engage with it beyond its superficial aesthetic. The primary question is whether the supernatural is a human projection, a form of psychosis. Structured as Lizzie’s memories intercut with her present, we see what she has seen and felt what she has experienced. 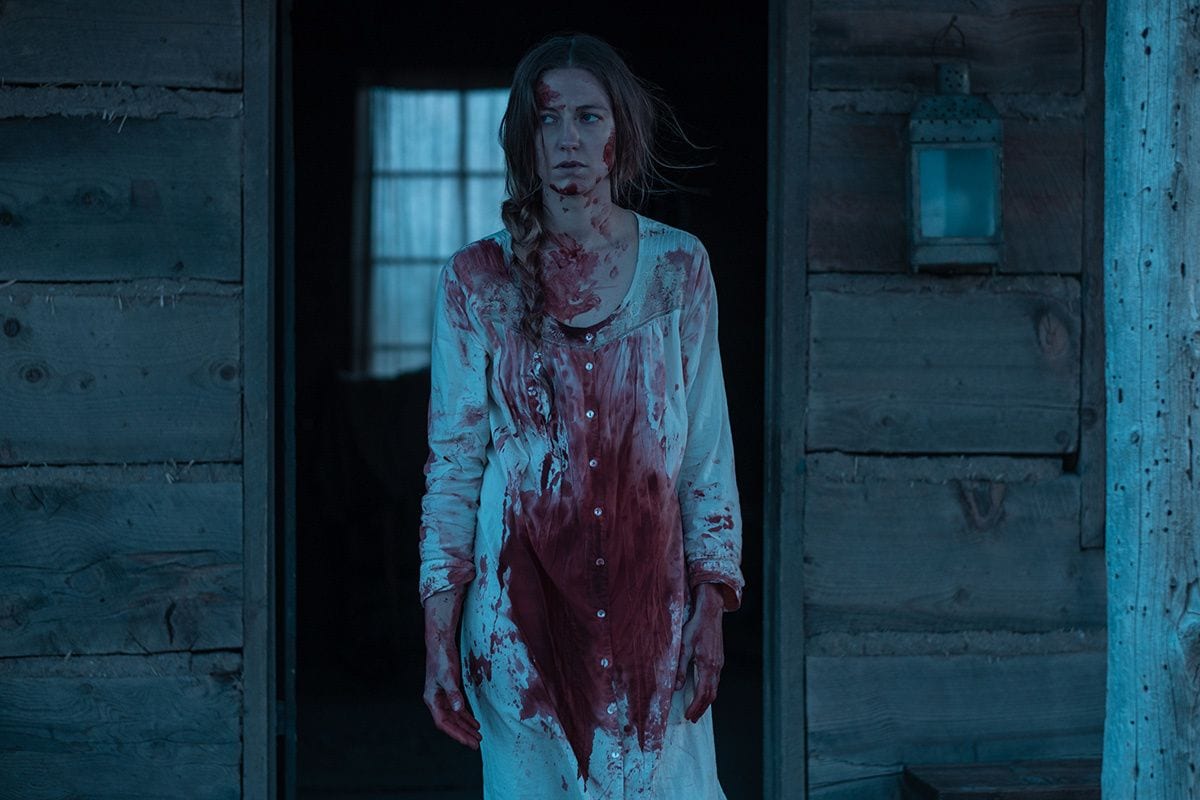 There is, however, that quandary with cinema in comparison to the literary in the seeming objectivity of the camera. A more suitable way to perceive the camera in a film like this is as connected to the mind of the character, but it’s as she sees herself and her story from an external and not an internal point of view. This negates the issue of the camera’s objectivity that may undermine the interrogation as to whether Lizzie suffers prairie madness, a psychosis, or whether the supernatural is in fact real.

Tammi and Sutherland converge a series of thoughts, including trauma and whether it changes and shapes Lizzie, eventually asking whether what we see is true. In flashback we see both Emma and Lizzie when they’re pregnant. Through this method we begin to see beyond the plane of reality that the men only perceive. We sense something untoward about the landscape that they miss.

This introduces an intriguing idea of woman as undergoing a god-like transformation during pregnancy that challenges conventional preconceptions of the deity. If God is the giver of life and can perceive all things of this world, including sinister forces, then by being with child and seeing or sensing the supernatural, Lizzie reorients the concept of God as spiritual being to human form.

Does storytelling and folklore plant the seeds that form in the mind and that we then project on our reality? In one scene, Lizzie reads Ann Radcliffe’s The Mysteries of Udolpho (1794) to Emma. Familiar with the story she tells Lizzie, “It’s just a person in the book, it’s not a spirit.” And each woman has a pamphlet titled, Demons of the Prairie handed to them by a wandering reverend they met on their outward journey. The literature gives us cause for suspicion as to the part imagination plays in Lizzie and Emma’s experiences, fuelling our interrogation as we ride along on the wave of their supernatural torment. 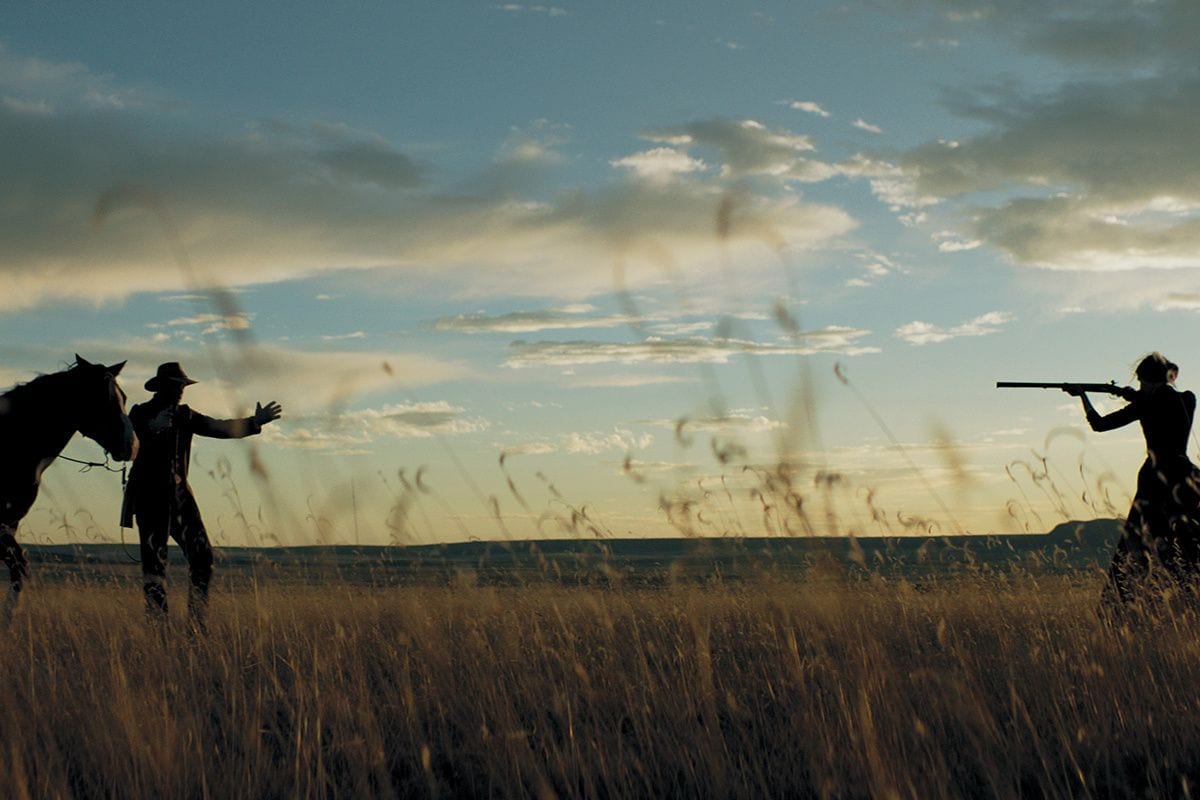 Isaac is dismissive of such superstition, yet remarks that the death of his son was because it was not God’s will. French author Jules Verne once asked, “What is there unreasonable in admitting the intervention of a supernatural power in the most ordinary circumstances of life?” There is nothing unreasonable, except that our collective thought is inconsistent – one can believe in God and yet be dismissive of the supernatural, or one can have spiritual inclinations and yet be dismissive in part to the concept of religion.

Just as Emma tells Lizzie that it’s not a spirit in the story, and Lizzie challenges Emma’s fearful episodes, alongside Isaac’s contradiction, The Wind reflects on the mind’s volatility – a battleground between the rationale and the irrational. Emotion clashes with reason.

Whether Lizzie suffers prairie madness or whether the supernatural is in fact real, Tammi and Sutherland leave us with ideas to contemplate, rather than the need to give a simple answer in response to their film. To anyone skeptical of the merits of genre cinema that is prone to immature bloodletting and superficial themes, The Wind, while quietly impressive, shows the mature side of genre storytelling.