If anything epitomizes the failure of today’s US administration to learn from the mistakes of its past, it’s the decision to use former Japanese-American internment camps like Oklahoma’s Fort Still as concentration camps for refugee children in the Trump administration’s ongoing persecution of migrants. (“Stop Repeating History: Plant to Keep Migrant Children at Former Internment Camp Draws Outrage”, Ben Fenwick, New York Times, 22 Jun 2019.)

Contemporary concentration camps are heinously immoral as a matter of general principle, but the terrible irony in using these sites lies in the fact they were formerly used as concentration camps for Japanese-Americans during World War II. The US government has apologized for its unjust and racist behaviour during that war (apologies of various forms over the internment have been issued by presidents from Ronald Reagan through Barack Obama), but its failure to learn from its own moral mistakes is brutally evidenced by its renewed use of the concentration camp system in lieu of a modern and just refugee and immigration policy.

“Old outrages have begun to resurface…with brutal results,” writes George Takei in his autobiographical graphic novel, They Called Us Enemy. The iconic Takei – a versatile actor perhaps best known for his role as Mr. Sulu in Star Trek: The Original Series, and whose progressive wit has in recent years taken social media by storm – was spurred, in part, to produce the graphic novel by his observation of history repeating itself.

The lively and compelling graphic novel, beautifully illustrated by Harmony Becker and written by Takei with the aid of author Justin Eisinger and comics author Steven Scott, revolves around Takei’s own experience as a child in an internment camp during the Second World War. It also paints a lively portrait of his family life. His family – a Japanese father, a mother of Japanese descent born in the United States, and his young brother and sister – were uprooted shortly after the outbreak of hostilities between Japan and the US and imprisoned in a concentration camp for “enemy aliens” for the duration of the war. 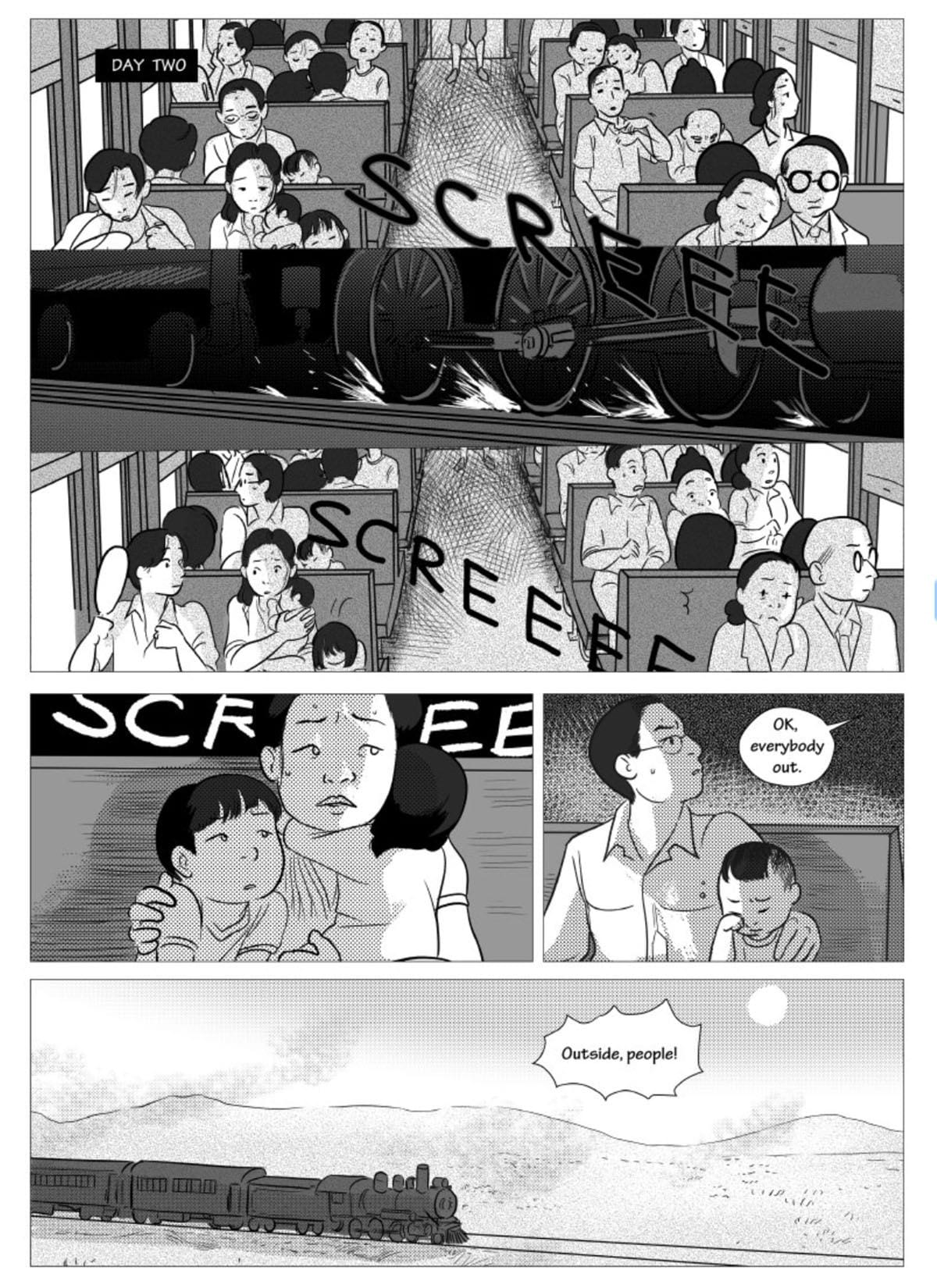 Japanese-Americans were targeted solely because of their ethnicity and the colour of their skin. American officials – Takei names several of them in his book, and they include both Democrats and Republicans – actively endorsed the internment of an estimated 120,000 US residents based purely on their skin colour and ethnicity, even though they were law-abiding, and often patriotic, American citizens and residents.

The war-time discrimination against Japanese-Americans is a deeply shameful part of America’s Second World War history. Not only were internees imprisoned under harsh and brutal conditions, but they were forced to sell or give up their hard-earned property and possessions, and even after their eventual release it would be decades before they were compensated for their loss and suffering. Once released, they had to begin their lives all over again, many of them after having worked hard for several generations to build a life for their families before losing everything.

During the war American officials pressured Japanese-Americans to voluntarily renounce their citizenship and seek repatriation to Japan, often under coercive and deceptive conditions. Takei’s mother signed one such repatriation agreement (despite having been born in the US), and it was only because of the principled work of a courageous handful of civil rights lawyers that some of these victims (including his mother) were able to nullify their renunciations as having been signed under duress and intimidation, and were able to remain in the US.

The internment had other consequences as well. It succeeded in radicalizing some of the previously content Japanese-American youth. Treated with such violent discrimination by their homeland, they angrily turned on America and embraced the Japanese imperial fascism they were already caricatured as being guilty of. There’s a lesson here for the present as well: a country that rejects its people risks radicalizing its own citizenry into future enemies. 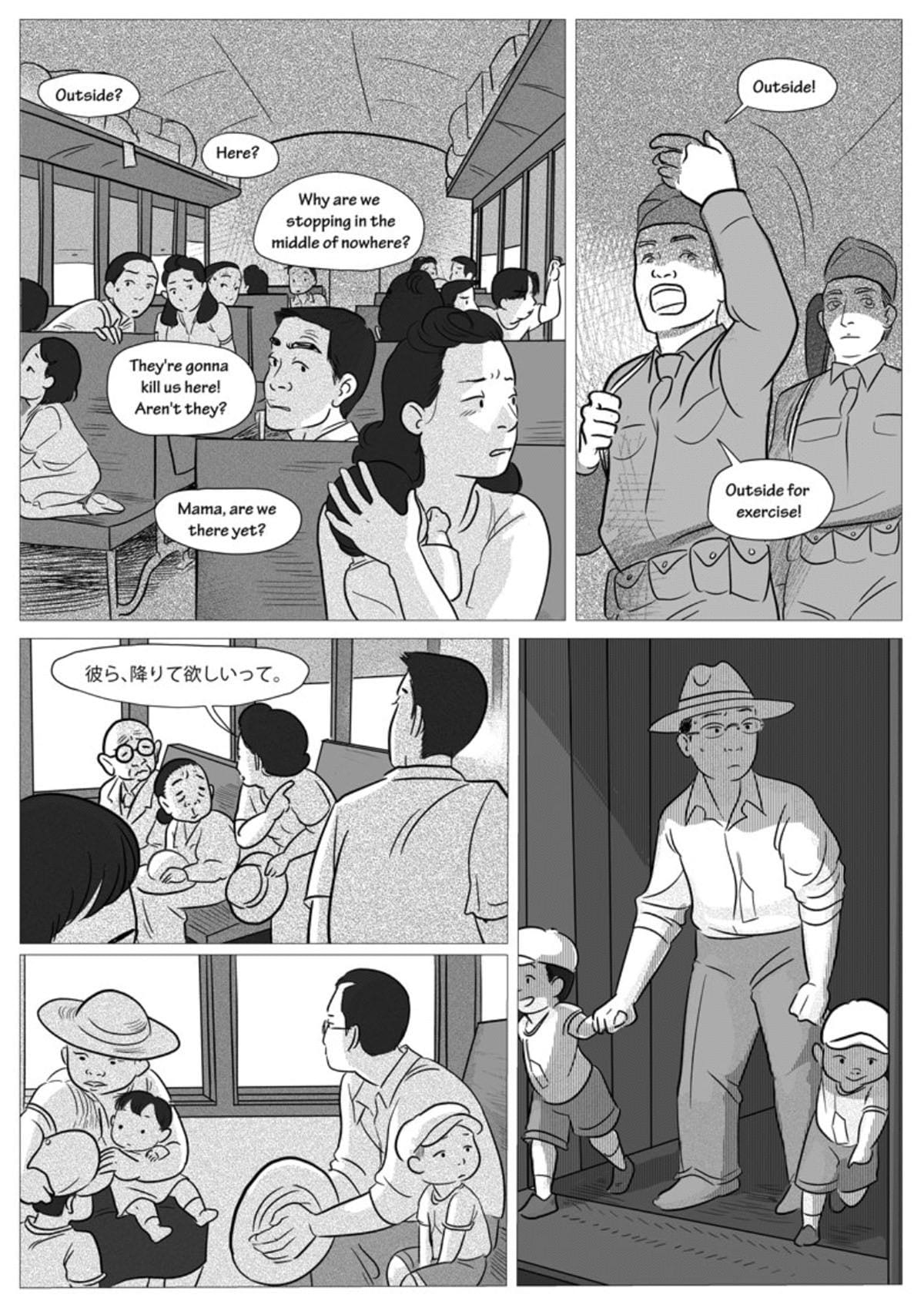 Takei’s autobiographical comic concentrates on the period of his family’s internment, but also reveals the impact it had on his future life and career. In frequent after-dinner conversations with his father as a teenager and adult, they both struggled to come to terms with the experience. Takei blamed his father for not doing more to fight and resist the oppression they experienced during those years. His father struggled to make the young George understand what a precarious position he’d been in, and how more overt resistance might have invited greater persecution and made things worse for everyone; at the same time, he wrestled with his own guilty feelings that he should or could have done more.

“Many Japanese Americans from my parents’ generation didn’t like to talk about the internment with their children. As with many traumatic experiences, they were anguished by their memories and haunted by shame…for something that wasn’t their fault. Shame is a cruel thing. It should rest on the perpetrators…but they don’t carry it the way the victims do,” writes Takei.

Takei went on to forge a notable acting career and offers snapshots of those years as well, in particular the struggle against racism as an aspiring Asian-American actor in the 1960s. While important opportunities came his way, his big break was of course with Star Trek: The Original Series. He writes in glowing terms of Star Trek creator Gene Roddenberry’s commitment to portraying a future free of racism and discrimination, and the iconic Roddenberry’s sense of guilt at the privileges white folks disproportionately enjoyed at the expense of minorities.

Takei has worked assiduously over the years to fight racism (and other forms of discrimination) and to honour the culture and historical legacy of Asian-Americans. His life and career offers a poignant example of a principled man who is both proud of his country’s accomplishments yet refuses to ignore its many continued shortcomings. There is a tone of profound concern in the contemporary commentary which bookends this tale, that an America which for many years had been slowly working to improve itself may now be floundering and sliding backwards. If America fails to remember and learn from its historical mistakes, suggests this narrative, its future may be in jeopardy indeed. 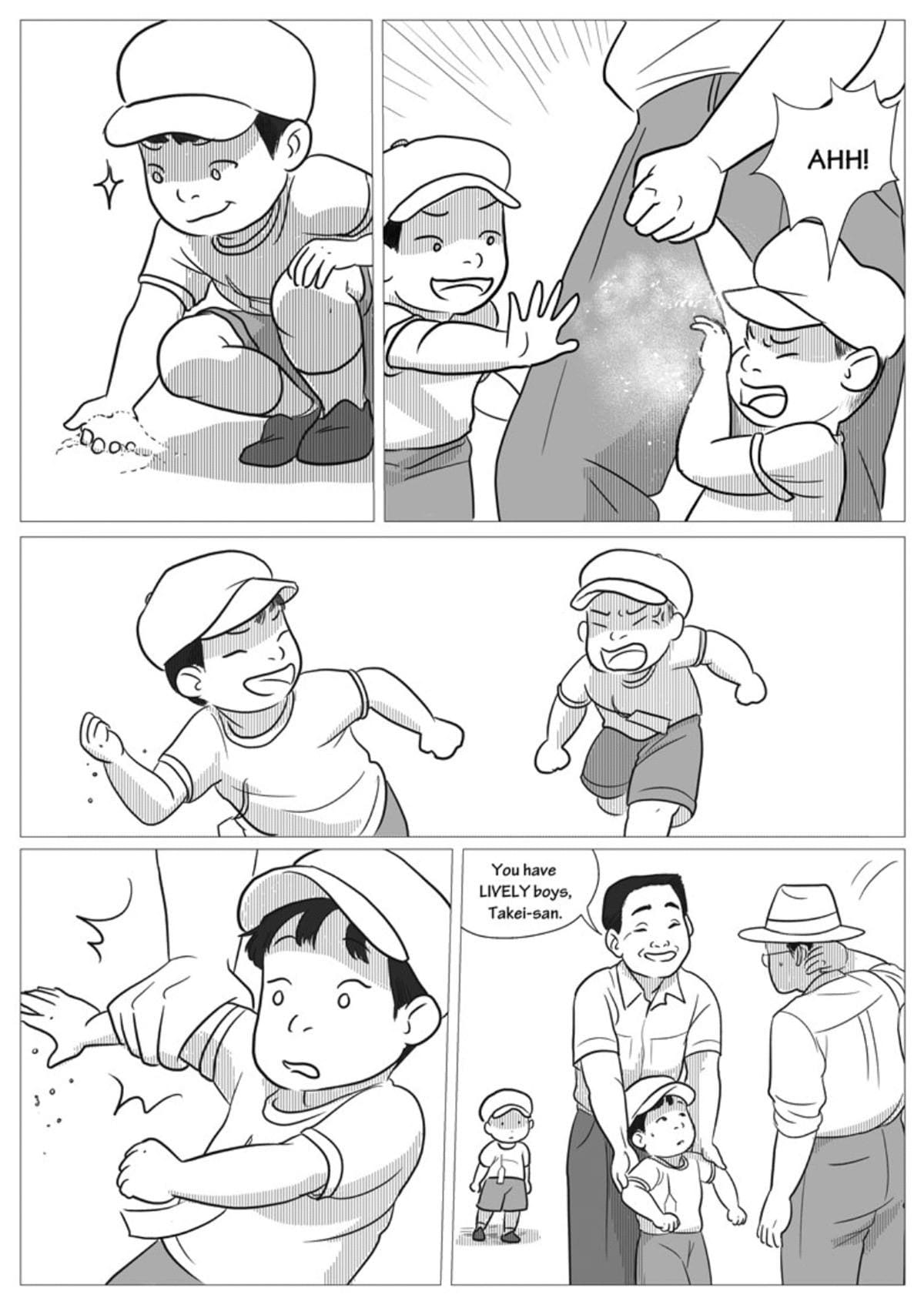 The struggle toward reconciliation for the abuses suffered by people of Japanese descent in the United States and Canada continues. The Canadian west coast province of British Columbia is presently conducting a series of community hearings across the country in order to inform its own reconciliation process; a measure resulting from a sense that the Japanese Canadian community wasn’t properly consulted and actively engaged when that province formally apologized for internment in 2012.(“Japanese Canadians call on B.C. to go beyond mere apology for historic racism”, Camille Bains, CBC News, 25 Jul 2019.) Only now are sincere and substantive consultations taking place to develop meaningful action.

Parallels between the WWII-era internment of people of Japanese descent, and contemporary internment of migrants in the US and Canada, has increasingly drawn parallels both in political advocacy as well as popular culture. Sharon Bala’s powerful debut novel The Boat People (Doubleday, 2018), which won the 2019 Harper Lee Prize for Legal Fiction, was based on the arrival in Canada of boatloads of Tamil refugees during Sri Lanka’s civil war in the early 2000s. In that novel, one of the main characters is Grace Nakamura, a woman of Japanese descent who works as adjudicator with the Immigration and Refugee Board, under pressure from a conservative government to reject refugee claimants.

She struggles with the disapproval of her Japanese mother, who angrily points out to her the fact she is perpetuating the same wrongs enacted against her own family. “It’s different,” argues Grace in one moving scene. No it’s not, counters her mother — “People who forget the wrongs that were done to them perpetuate those same wrongs on others.”

Takei’s tale, superbly articulated in this powerful and moving graphic novel, reminds us that while material compensation for past wrongs is important, what’s more important is the ability to learn from those mistakes and not to repeat them. Even now, after a lifetime of working not just to entertain but also to improve life for his fellow human beings, George Takei continues to offer wisdom, wit, and words from which we all may learn. 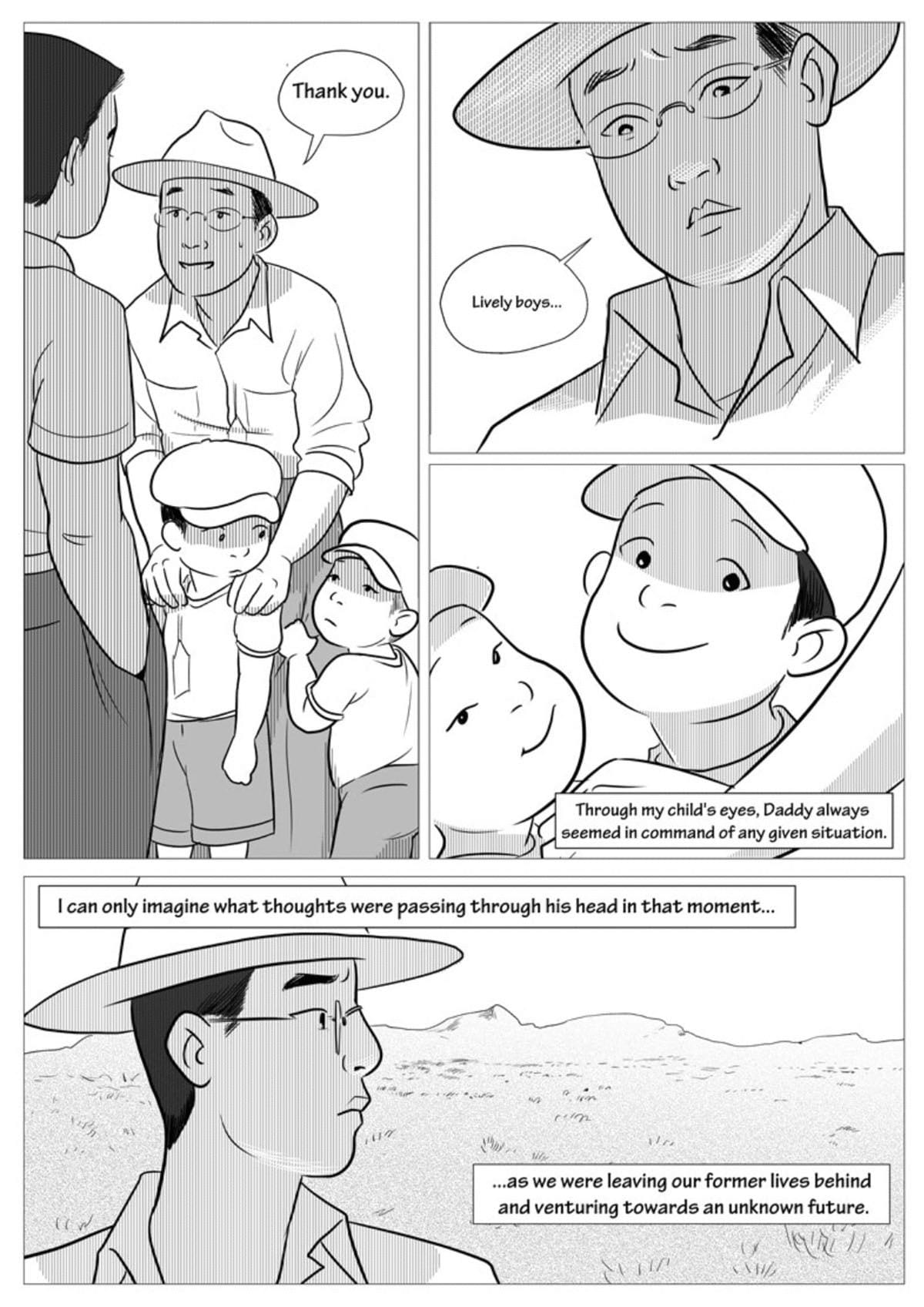