The Khmer Rouge regime, which ruled Cambodia from 1975–1979 (after defeating the corrupt and repressive, if not quite as bloodthirsty, US-backed military dictatorship of Lon Nol), has been rightly referred to as a genocide. During those four years roughly two million people (about a quarter of the country’s population) died as a result of the regime’s brutal policies. Many died from the starvation and disease that wracked the country under its ineffective and paranoid leadership, but many were also murdered by the regime and its ruthless henchmen. Researchers estimate that 60 percent of those who died – roughly 1.3 million – were directly executed by the regime.

The horror of this historical period has been scrupulously documented in film. From Roland Joffe’s 1984 masterpiece The Killing Fields, which dramatizes the true story of Cambodian journalist Dith Pran’s struggle to survive those years, and his friendship with American reporter Sydney Schamberg, to the more recent First They Killed My Father (2017), directed by Angelina Jolie. Jolies film is based on based on the memoir of the same name by Loung Ung, another true story, depicting the experience of a child soldier under the regime.

There’s no shortage of screen drama and documentary on the subject. Drawn & Quarterly’s translation of Tian Veasna’s graphic novel Year of the Rabbit (originally published as a French trilogy beginning in 2011), now offers a stunning and comprehensive graphic novel depiction of this period as well.

The author and comics artist was born three days after the Khmer Rouge seized power. His father was a doctor (intellectuals and skilled workers in particular were targeted for execution under the regime’s twisted policies) and his family was forced to leave their home in the capital of Phnom Penh when the new regime ordered the evacuation of the entire city. For the next four years the family struggled to stay together and survive, as they were forcibly relocated to work camps and rural villages. They eventually succeeded in fleeing across the border to neighbouring Thailand. The family’s story offers an apt representation of the experience of everyday Cambodians during this period, even if his family was probably luckier than others. 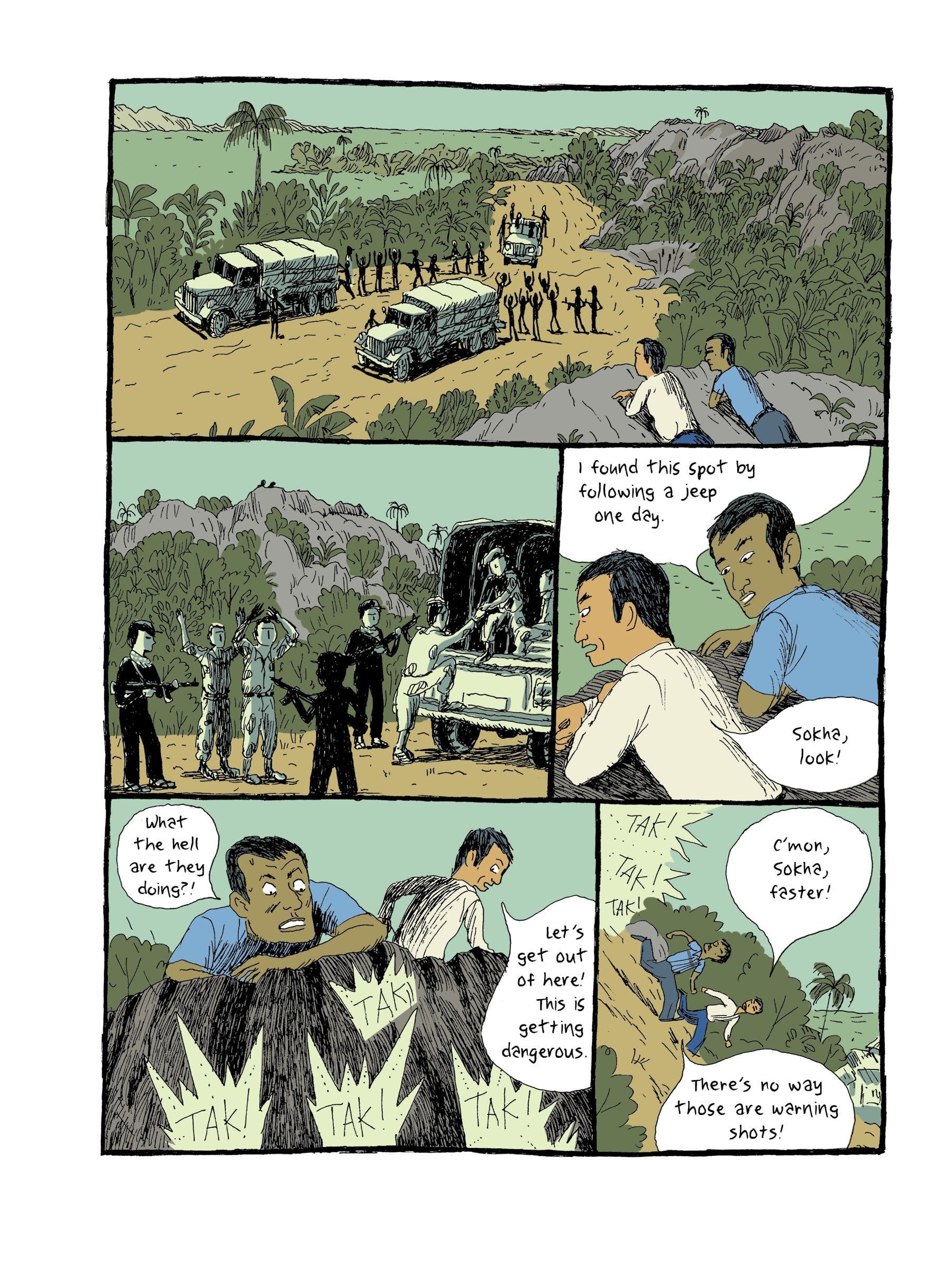 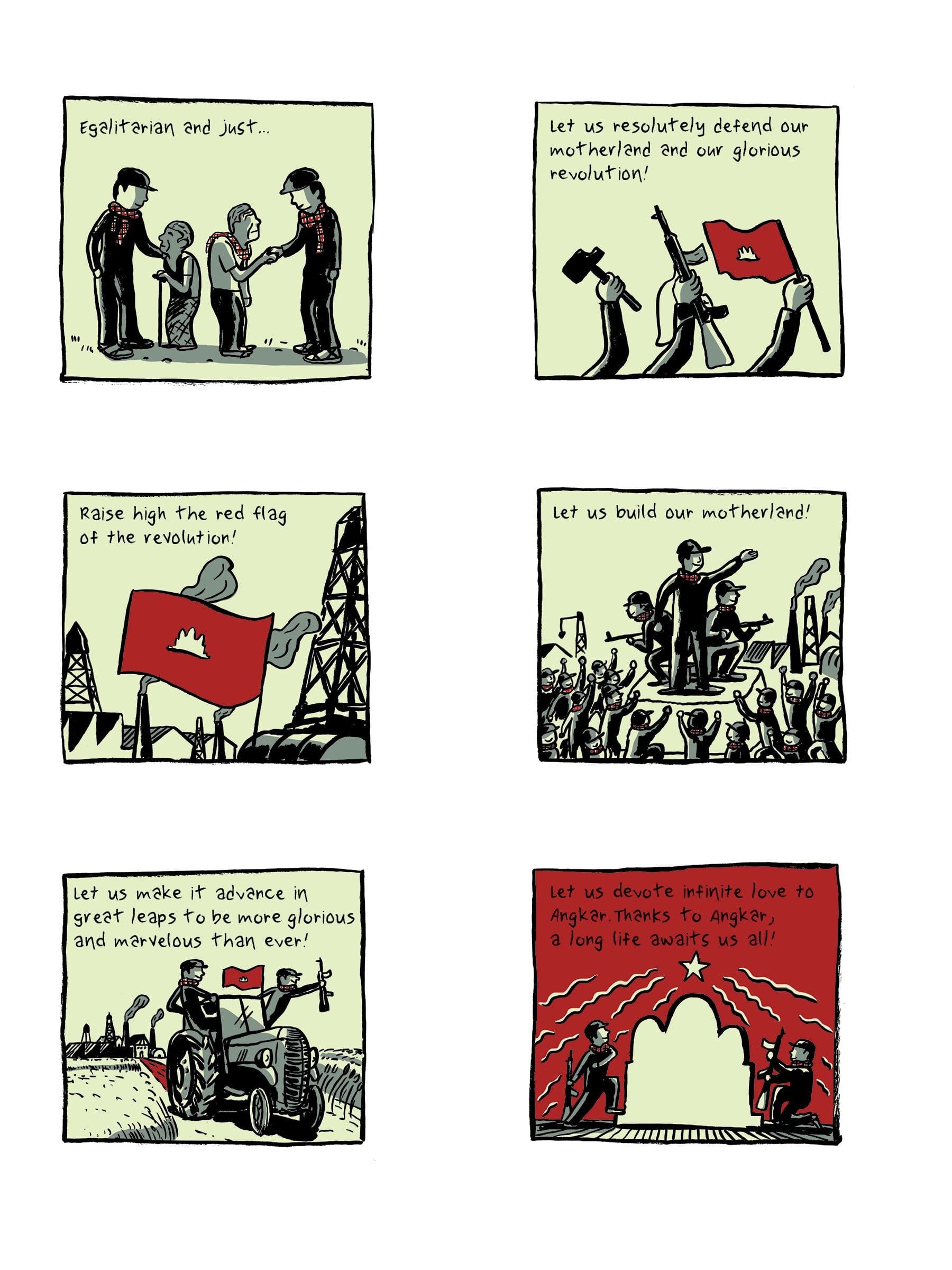 Year of the Rabbit makes full use of visual tools to convey the extent of repression under the Khmer Rouge. In the villages-cum-work camps, the prying eyes of regime spies are everywhere, if one looks closely enough. Characters take advantage of spare moments during work breaks to scour creek beds for snails or crabs with which to supplement their inadequate diets, but the presence of spying eyes lurking behind palm leaves in the corner of the panel presages the starving villagers’ later denunciation by neighbours at the community meetings, which functioned as collective confessionals.

The reader becomes hyper conscious of the significance of eyes and looks. The narrowed, swivelled eyes of a stranger in a panel depicting three men talking in lowered tones about the viability of escape, reminds readers of the constant presence of eavesdropping villagers and spies. The graphic novel takes full advantage of these visual techniques to offer a glimpse into the paranoia and panoptical fear invoked by daily life under the Khmer Rouge.

Many of these spies were children, trained by the Khmer Rouge to monitor, distrust, and denounce their parents and other adults. The regime privileged children, who were deemed more malleable to indoctrination and therefore more “trustworthy” and valued than adults who had grown up with the memory of less repressive times. Like child soldiers everywhere, these children became vicious and violent tools of the regime. They formed part of a broader scheme by the regime to turn families against each other: family members were ordered to denounce each other to save their own lives, and relatives were often ordered to execute their own family.

Year of the Rabbit deploys an extensive cast of characters, and the extended family tree Veasna offers at the beginning of the book becomes an important tool in the sometimes difficult task of keeping track of who’s who. Each chapter opens with encyclopedic entries about life under the Khmer Rouge terror, which usefully supplement the graphic narrative that follows. 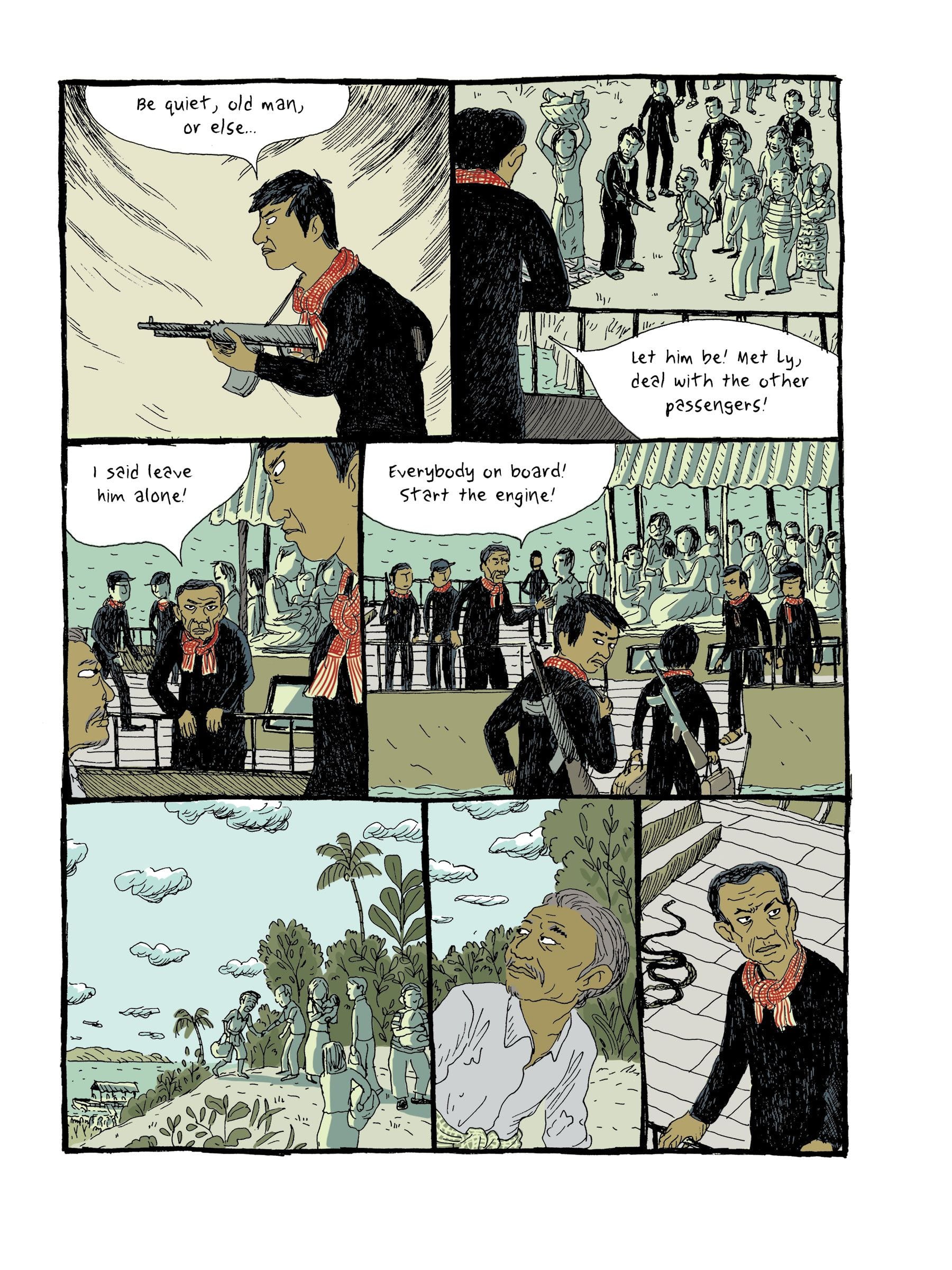 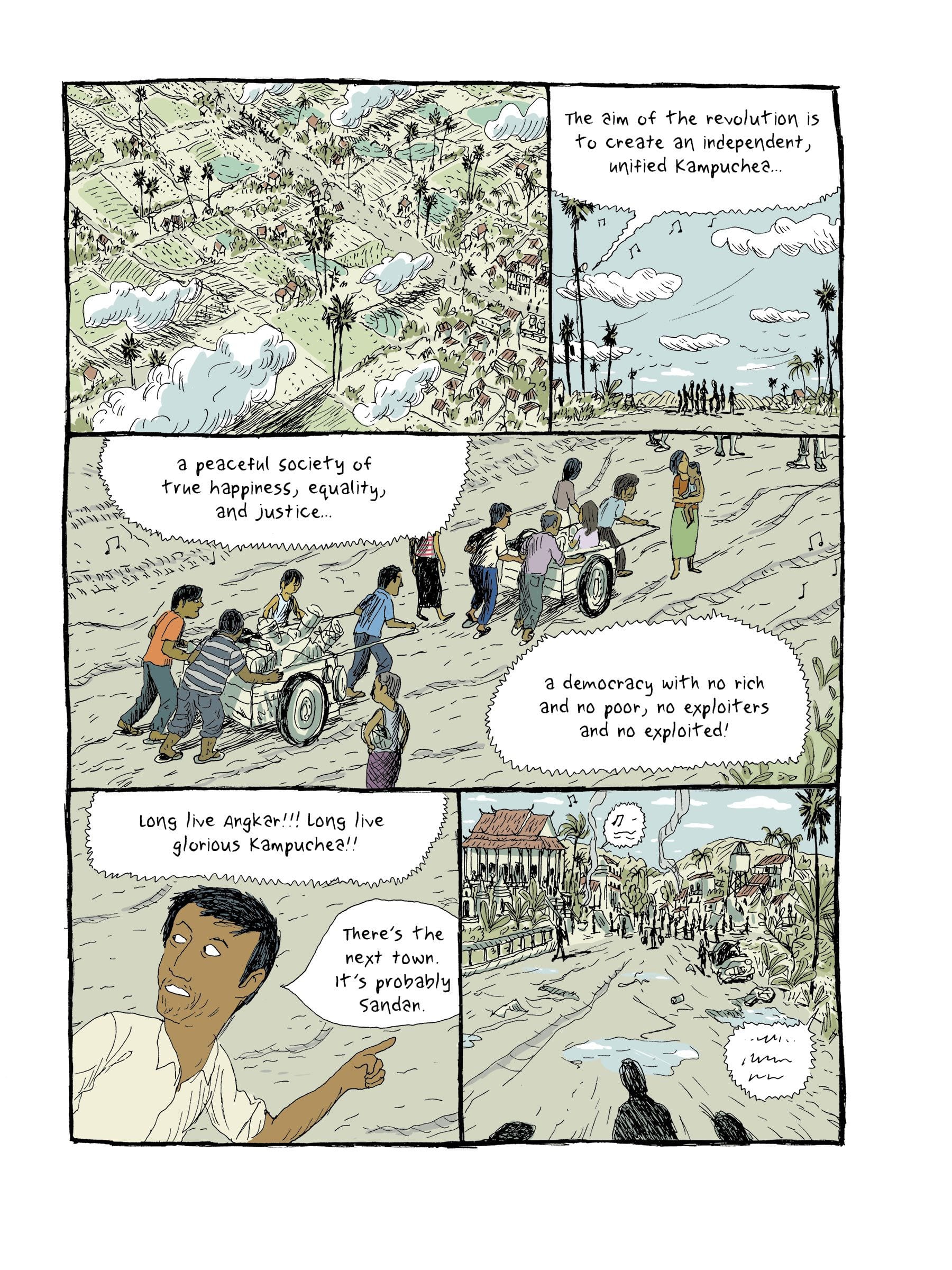 The book’s almost 400 pages are necessary to do justice to this horrific tale; anything shorter would have done the narrative a terrible disservice. Yet it’s a fast-paced read. Dialogue is sparse (words, after all, could be used against you) and the small panels lend themselves well to an even more effective visual storytelling. The loosely stylized, broadly realistic and schematic bande dessinée art makes the book easily accessible to readers, even if the content itself is harrowing. Shocking though the content might be for western readers, it’s telling, perhaps, that a review in the Phnom Penh Post described the comic as not particularly explicit.

Footnotes and the explanatory prefaces to each chapter also contribute to the book’s accessibility, ensuring it’s possible to follow without the use of supplemental reference aids. All of this situates it on the superior end of the many historical graphic narratives being published in recent years; far too many of them are too short and lack the contextual aids to be comprehensible by anyone who is not already thoroughly familiar with the stories they tell. Year of the Rabbit deftly avoids those traps.

Yet it is fundamentally the story that distinguishes Year of the Rabbit, along with its vital historical reminder of just what scale of horror and cruelty humanity is capable of. The most harrowing element of this – and Year of the Rabbit conveys it clearly – is how quickly, easily, and unexpectedly cruelty and genocide can become the norm. Residents of Phnom Penh went from celebrating what they thought was the end of a bloody civil war (with the Khmer Rouge victory) to being forced out of their homes and into the rural countryside in literally the same day. Doctors and medical professionals went from valued, sought-after life-savers to targeted enemies of the state with a death penalty on their heads just as quickly.

The capriciousness of political violence can emerge and spread with lightning speed. It is perhaps a grim truism that Cambodia is fortunate the genocidal rule of the Khmer Rouge lasted no longer than four years (the group’s final defeat would in fact take several years more), but Year of the Rabbit reminds us just what nightmare can be wrought in a mere four years. Those years left a quarter of the country’s population dead, and the survivors with a lifetime of intergenerational trauma. Year of the Rabbit is as much a vital moral lesson as it is a superb historical graphic narrative. 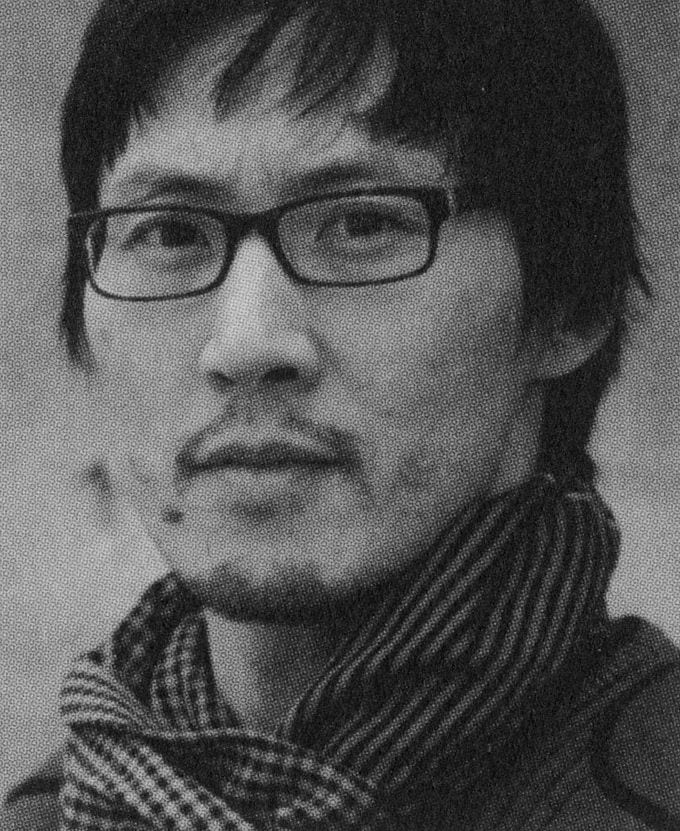