If what happened in Denver on the final week of the Magnetic Moon tour is an example of the delirium that Tiffany Young brought to 17 other North American cities in October and November, watch out world. Tiffanymania, a completely contagious outbreak, is upon us, and anyone who comes in contact with it will be glad they did.

The San Francisco-born Young, who has split half of her 30 years living in Korea and the United States, is the latest — and perhaps brightest — hope to emerge from a universe filled with rising pop stars raised in different parts of the world. Young’s 95-minute all-ages show on 18 November at the Bluebird Theater — her first as a headlining solo artist in the Mile High City — was not only energetic, enthralling and thoroughly entertaining, but also the perfect paradigm for a concert performer who wants to end a show on a high note and make the world a better place, no matter how idealistic that sounds.

Young brings years of knowledge, exuberance, and polished performing experience to the stage, whether it’s as a reality or variety television show host or contestant, in a starring musical theatre role or, starting at the age of 18, a valuable member of K-Pop’s Girls’ Generation. And it shows. But her solo act is relatively new to North Americans, following a return to the States in 2017 and the release of two EPs and numerous singles in the past four years. Yet her major impact while converting from K-pop to mainstream pop is undeniable after just an eight-city mini-showcase in early 2019 and the 18-city Magnetic Moon tour that ended last week with visits to Denver, Phoenix, and Los Angeles, the latter a place where she grew up that has become her home base again.

After seeing shows at the 500-person capacity Bluebird for more than 25 years, I can’t recall witnessing as much excitement for a single performer in previous visits. That fervor undoubtedly contributed to the long lines of concertgoers, rewarded by free Tiffany souvenirs, wrapping around the block while gearing up for an early 8:00 pm start. 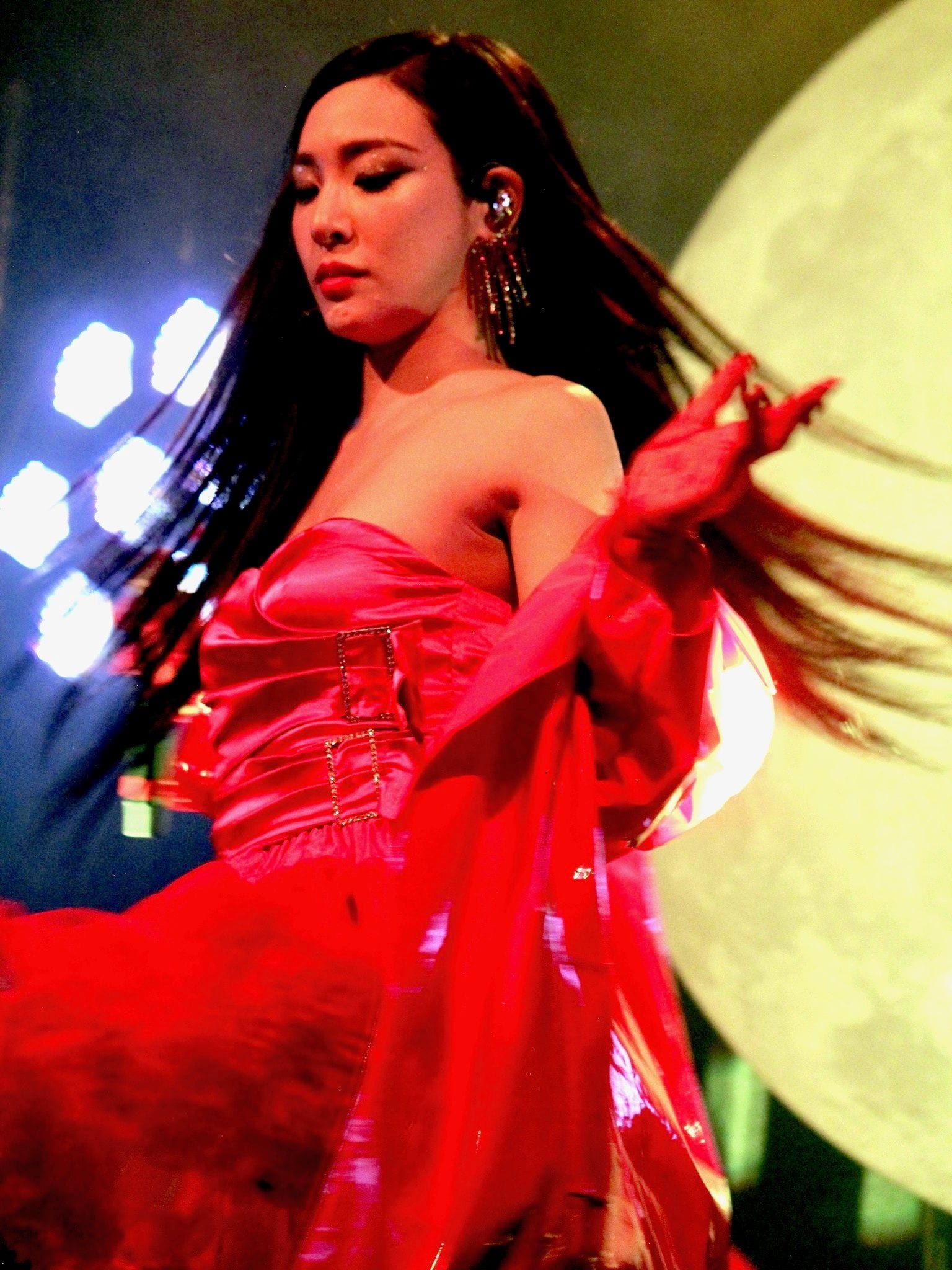 Though the doors opened at 7:00 pm, there was gridlock at the entrance, where the use of only one metal detector might have caught venue employees off guard and delayed Young’s appearance for at least 20 minutes to ensure no one missed this Love-Fest at Tiffany’s. After all, the iHeartRadio Music Awards’ best solo breakout artist in fan voting this year doesn’t need or demand a supporting act.

Asked during our 28 October interview just after this tour began if she had plans to utilize show openers, Young said with a laugh, “No, I don’t. It’s all, Tiffany.”

That’s basically true, as the thunderous chants of “Tif-fan-ny, Tif-fan-ny, Tif-fan-ny” preceding her late arrival demonstrated. While Young owns the stage, she is capably assisted by dancers Ellen Kim and Eileen Harman through about half the 18 songs, and two working-overtime musicians lurking in the shadows, multi-instrumentalist Kanobby (Justin Keitt’s stage name), and Donald Graham on drums.

With the beaming moon as a backdrop, it’s Young who shines. During a concert that started with “Run for Your Life”, her explosive October single, and ended with its reprise, the Bluebird was jam-packed with a crowd of mostly empowered girls and women. They were cheering wildly and singing along during every song, then screaming and applauding every time she expressed her many meaningful thoughts and feelings during a refreshingly PG-rated show without a curse word in sight.

Looking glamorous and gorgeous in a red-hot ensemble that included a matching jacket, feathery skirt and thigh-high boots, Young exuded confidence through early song-and-dance numbers like the sultry “Over My Skin” and the soulful “Talk”, then soaked up the adoration while addressing the crowd after her cover of Miley Cyrus’ “Wrecking Ball”.

“Denver … you got me glowing inside; you got me smoking up in here, actually,” she said before warbling the words, “You got me glowing under this moon,” then good-naturedly chiding her drummer for making fun of her romantic antics. “I feel cute tonight, you know,” Young added with a laugh while her frenzied fans lent their unbridled support. “You got me glowing.” And they certainly saw the light.

Two selections from 2016’s I Just Wanna Dance, Young’s first groundbreaking solo EP — “Yellow Light” and the title cut — highlighted the next section. They surrounded a cover of Destiny Child’s “Independent Women” and “Teach You”, one of her 2018 digital singles she has said “is for all the devious lovers out there” who should know “not to play with fire.”

After two more covers and an uproarious delivery of the Girls’ Generation’s “Run Devil Run”, Young deeply connected with the crowd in what turned into a couple of separate, mostly spontaneous audience participation segments.

Described by Young as “the sweetest, sweetest angel”, a girl invited the delightful showstopper to come to live with her. “I’m so tempted, actually,” Young joked as the crowd laughed. Finding out the youngster was a Mile High City resident, she added, “Well, now I have a place to live in Denver,” prompting a roar from the crowd.

Hearing “I love you” from various voices in the audience, Young returned the sentiment each time. After performing perhaps the night’s most romantic song, the Babyface collaboration “Runaway” from 2019’s Lips on Lips EP (and trading hand-heart symbols with her fans), Young received a marriage proposal from a girl named Evelyn, who was celebrating her birthday at the show. “Well, I can’t marry you, but I can sing you ‘Happy Birthday,'” Young said, leading the crowd in a lively rendition.

Even a request for book recommendations didn’t fluster Young, who offered The Sun and Her Flowers, a collection of poems by Rupi Kaur, and The Flame, by late Canadian poet and musician Leonard Cohen. The heart-and-soul search-and-rescue mission continued as Young summed up this series of tour stops.

“Really, it’s been so, so amazing, and I’ve said this, but it is like opening a box of, like, really, really amazing chocolate,” she explained. “And I’m like, ‘Oh, I don’t want to eat it all. This is so amazing.’ That’s how I feel right now. And you know my love for sweets. … To be able to share all the amazing, happy, sweet moments … it’s so important for me to tell you that …”

Just then, one agitator interrupted by yelling out “Sing!” in Korean, stopping Young in mid-sentence. The unshaken singer pleasantly responded in Korean (then translated for the majority of us), “Honey, I’m saying something very important right now. (crowd laughs) Because this [next] song connects to this message.” That message — the more different your story is, the more you should share — and the next song — “The Flower” were equally inspiring as Young continued the beautiful Lips on Lips portion of the show without her dancers while using solid backing tracks to complement her lovely vocals.

The EP’s title cut included a spirited singalong session before Young stunningly melded a two-minute snippet of the Shawn Mendes cover “In My Blood” with her own “Born Again”, the EP’s powerful first single that she co-wrote with four others, including her producer Fernando Garibay.

In our interview, Young kindly credited Garibay (Lady Gaga) and Lips on Lips co-producer Kev Nish for guiding her in the proper direction during the recording process. “Mental wellness is the key before we really start exploring and digging into our emotions and stories and bringing a song together. And that has been such a therapeutic process. I mean, it wasn’t easy at first because, you know, digging into feelings that you don’t really want to look at sometimes may be uncomfortable. But I guess being surrounded by people I feel safe around really helped me open up to that,” pointed out Young, who also told me that after writing and recording around 30 new songs, her “ultimate goal” is to deliver a full-length album eventually.

As Young exited the stage after wrapping up “Born Again”, the music kept playing, and the crowd, still screaming, obviously wanted more Tiffany. “Tif-fan-ny, Tif-fan-ny, Tif-fan-ny” became the rallying cry that wouldn’t die until she and her dancers returned for the thrilling two-song encore that included the majestic “Magnetic Moon”.

After going to the moon and back, expectations for Young and her followers are as high as that orbiting sphere. Yet while looking into the future, she plans to stay grounded. “My heart is set on making sure I want to make a positive impact wherever I go,” she offered in our interview. “… Whether it is about love … or running for your life or being there for somebody who needs somebody to talk to or who feels alone.”

For an artist who sounds that down to earth, Tiffany Young should find a way to reach the top of the pop world.