Tiger by the Tail opens with a feint. We’re in a Mexican whorehouse as the prostitute lies provocatively on her bed, winking and raising one leg in the air. This image was used in the poster, as reproduced on this Blu-ray, as though the film promised the sort of delights entering cinemas in the loose-limbed ’70s with its new MPAA rating system.

Don’t you believe it. No matter how come-hither her attitude, the professional manages to keep her loose-knit blue blanket draped demurely over the goods. And just in case she’s not sufficiently demure — and she is, for the scene will feature her running and screaming upstairs and down without ever dropping that surprisingly enveloping blanket — the carefully framed image also imposes discretion. Her customer grins and commences to unbutton his shirt, the better to get down to business, when the movie’s real business interrupts the scene by crashing through the door.

The closest we come to salacious promise is when Charo, or more likely her body double, stands with her back behind the beveled shower door. When an ornery hombre tries to get fresh with her, the flimsily clad damsel pulls out a knife and dares him to come closer, calling him “pig” and “cochito”, for this will first and last be a movie about acting tough rather than having sex — all tiger, no tail.

There’s a method to this movie’s madness, for the vaguely adult garnishings are mere window dressing on what’s actually an example of Hollywood’s second wave of postwar noir films. That genre had flourished in the ’40s and ’50s before tapering off, and now the ’60s were reviving the genre with a mild self-consciousness that didn’t yet employ the word “noir” in reviews or publicity as its own come-hither password.

The pattern of this movie’s plot belongs with such contemporary items as Buzz Kulik’s Warning Shot (1967) or Paul Bogart’s Marlowe (1969), without being as good. I cite those examples not only for their quality but for their TV influence. Both were helmed by TV directors and starred heroes, respectively David Janssen and James Garner, who perfected down-at-heel TV gumshoes. TV is where noir had gone, not to die but to bide its time.

Although theoretically made for theatres, Tiger by the Tail was a stealth TV production. The film’s origins derive from the western series Tales of Wells Fargo (1957-62), which for a time had employed producer Earle Lyon, writer Charles Wallace and directors Francis D. Lyon (no relation) and R.G. Springsteen. As commentator Howard Berger explains by reading from Francis’ autobiography, the men decided to embark on a run of inexpensive color features specifically designed to be sold to TV after their theatrical run. The Lyons’ company, United Pictures Corporation, made nine such films in the late ’60s. Shot in 1968 and released in 1970, Tiger by the Tail is the last of these prime-time-ready products.

The most prestigious of these careers belongs to Francis D. Lyon, a top-drawer editor best known for supervising Robert Rossen’s Body and Soul (1947). That great noir film, starring John Garfield, is most famous for James Wong Howe’s exquisitely expressive photography, especially in the smoky and vigorous boxing sequences. Editors Lyon and Robert Parrish won Oscars for it. Lyon began directing B films in the ’50s, most notably Cult of the Cobra (1955). His pinnacle was Walt Disney’s well-budgeted The Great Locomotive Chase (1956), marked by excellent widescreen production values, lots of stunts, and suspenseful editing. He then moved into TV, as had B western producer Earle Lyon.

Tiger by the Tail has one scene — the double murder — where the film’s plain efficient visual style is suddenly enlivened by striking, modern editing that uses expressive, disorienting cross-cutting. It’s worth wondering if that choice belongs entirely to editor Terry O. Morse or if it’s the mark of producer Francis D. Lyon’s creative input. It hardly seems like the work of director Springsteen, a prolific specialist in Republic westerns who also moved into TV.

Allowing for one or two trims (like the entire whorehouse scene, apparently), the film would have looked perfectly at home on TV. Shot not in serious widescreen but 1.85:1, the image may have been unmatted for TV prints and in any case would reduce acceptably. The tough dialogue is free of profanity and the violence devoid of blood. TV people constructed the movie, and except for Hedren, whose career had been on the wane, this was a TV cast. 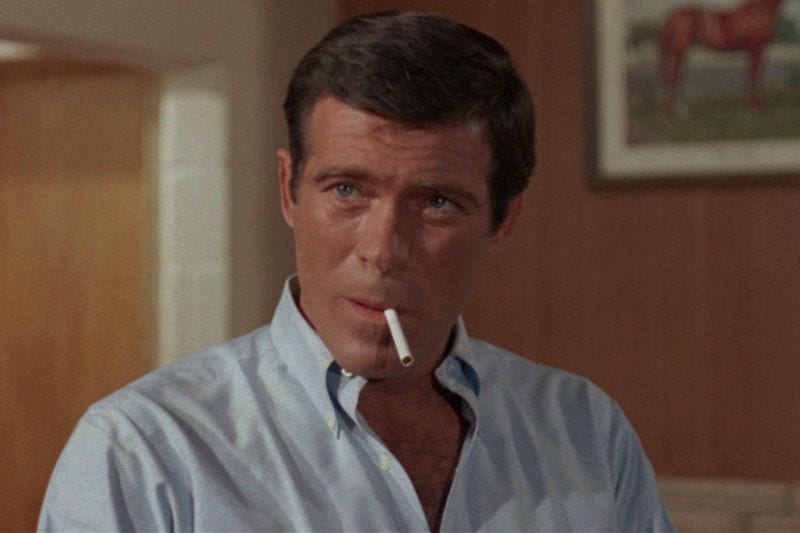 The hero is played by Christopher George, best known for The Rat Patrol (1966-68) and for co-starring often with wife Lynda Day George. His character, Steve Michaelis, is a returning Vietnam veteran very early in the day for such figures. Popular culture hadn’t yet pegged the trope as a brooding psycho, although the plot’s circumstances do their best to victimize him the moment he arrives home, still in uniform. Quick-tempered, adept with his fists, and constantly knocking back a swig of something alcoholic while raising his eyebrows at pretty women, Michaelis is the exact type of uncomplicated he-man common to the Rod Taylor era. As a former marine who’d done a USO tour of Vietnam only the year before shooting the picture, George inhabits the role comfortably.

He’s surrounded by middle-aged men familiar from virtually every TV show of the era. Dennis Patrick plays his contentious older brother, supposedly the owner of the famous Ruidoso Downs racetrack in New Mexico, which plays itself attractively. Patrick gets to say, in reference to the newspaper headline about the whorehouse brawl, “Steve, I’m the president of a racetrack. I can’t take this kind of publicity!”

It falls to the ubiquitous Lloyd Bochner, as a suspicious racetrack partner, to utter the ever-popular “I went for the robbery deal, yes, but I didn’t bargain for murder!” That’s after the older brother and a silent extra have been shot in the flashily-edited sequence, and Steve is somehow being framed via any number of clumsy clues.

Also sweating suspiciously are Dean Jagger, as a bald banker, and Alan Hale Jr. as a bluff sleazeball — yes, Gilligan’s skipper, still wearing loud Hawaiian shirts. John Dehner plays the tall, disarmingly loquacious sheriff who lets Steve run his own loose-cannon investigation, while Skip Homeier fumes and squints as a nasty deputy on whom we must keep our eye. In avuncular mode, R.G. Armstrong is the good deputy who is Steve’s friend. Perennial old man Burt Mustin has a cameo. Most of these actors could have easily switched roles and might be mistaken for each other by casual viewers who know only that they’ve seen them a thousand times.

On the distaff side, snappy comedienne Glenda Farrell shows up as a business owner and gun expert who utters a rueful little speech about how “I’ve lived and I’ve loved”. Hedren’s role is mostly to lounge by the pool and deliver lines like, “You know, I hate clothes. If I had my way, the world would be one big nudist camp.” Showing up for three lively scenes is Charo, and I’d like to offer a quote from her except that she’s totally incomprehensible. She does, however, shimmy and play guitar and sing a number she co-wrote with husband Xavier Cugat, and that’s the kind of thing she does best.

They all move like pegs through a simple, vigorously paced whodunit that makes no obvious sense, although the final revelations are interesting. Also interesting are the New Mexico location work and glimpses of local color, such as a too-brief tribal display from the Mescalero Apache Horn Dancers. Credited for the same soiree is an act called Meredith Neal and the Boot Heel Boys, playing bluegrass in the background. What matters is that George’s brawny frame, now smiling, now scowling, strides straight through the center of every scene and holds the story together.

The commentary by Nathaniel Thompson and Howard S. Berger makes no great claims for the picture, adopting an “it is what it is” approach that wanders down nostalgic by-ways and invokes the aroma of the bright vinyl decor. This 4K scan from the original negative and interpositive prints in Paramount’s vaults looks better than the movie would have looked on 1970s TVs, which is where most people saw it. Perhaps its most obvious appeal is to Hedren fans, who might be the most disappointed. However, if you’re a fan of George, veteran TV characters, and the byways of noir, this has your name all over it.