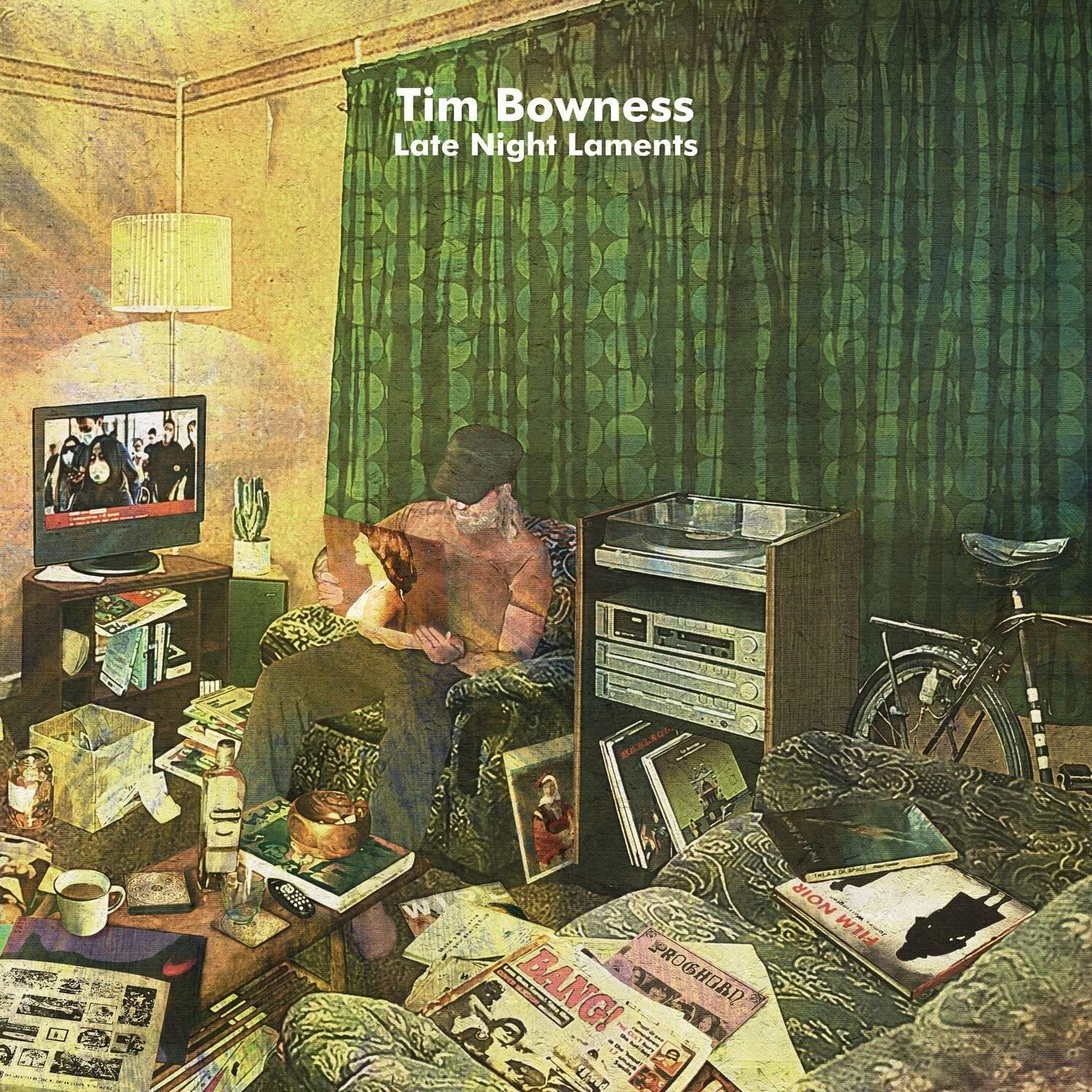 A global pandemic, populist authoritarianism, fake news, police brutality, terrorism, widespread socio-political discontent. There’s been a good reason to feel a certain existential dread over the last few years. Art often provides a means to explore and reflect on these global issues, and musician Tim Bowness finds his atmospheric dream-pop a vehicle to tackle them head-on.

This isn’t Bowness’ usual playing field. While his past solo work has touched on intimate themes and social relationships, he’s never quite so overtly explored political subject-matters or contentious sociological issues on a global scale. His previous release with No-Man partner Steven Wilson, the 2018 disco symphony Love You to Bits, couldn’t be further from the pensive reflection on political radicalism, terrorism, and alienation of his latest record, Late Night Laments. But this shift in thematic direction couldn’t have come at a more opportune time.

“I wondered if in the face of a global pandemic art would seem like an indulgence,” Bowness tells PopMatters. “Initially, when I finished the album, I worried that the themes might be irrelevant because a lot of the themes involve things like hate crimes and generational divides and so on, but through the pandemic, I was quite surprised that a lot of them became more prominent.”

Written over the latter half of 2019 and early 2020, Bowness wasn’t responding directly to this year’s global events. It is perhaps a condemnation of 2020’s ever-deteriorating socio-political climate that the record’s themes seem more prescient now than they did when he recorded the album. But for Bowness, the themes he explores in his music are only as important as how he tackles them. More than simply referencing political events and contemporary social issues, he’s interested in using music productively.

“One of the tracks, ‘I’m Better Now’, is about a hate crime, an extreme murder,” Bowness explains. “But what I wanted to do with that was present an extreme situation but in a moderate way that almost makes it comprehensible. It almost makes it seem as if to that person, it’s the most natural thing in the world to have done.

“Part of the reason for that is that I do feel that politics has become more divisive, and people are taking more extreme positions. And I also think that many people are kind of slipping through the cracks feeling their voice isn’t being heard. I think there’s a danger in that. This is where you do get riots; this is where you do get hate crimes.

“Of course, it goes without saying I’m against hate crime. But the actual lyric itself is attempting to explain somebody who is living on the periphery of society feeling that their voice is unheard and so, to them, doing this extreme thing is the only way of being seen of being heard of getting. I was attempting to describe situations that often were quite difficult or quite extreme but from a perspective almost of understanding.”

Photo by ASTERISK via Unsplash.com

Part of this involves avoiding overly moralizing lyrics or blanket statements. Bowness sees nuance as central to political discussion and deliberately leaves much of the record’s lyrics open to interpretation. Rather than provide stringent conclusions or pass judgment on right and wrong, he’s more interested in creating some kind of appreciation for others with an opposing viewpoint.

“I don’t want to be didactic. I’m not quite sure being didactic works. Partly I think it’s too obvious an approach, and partly I find that when musicians get involved in political proclamations, they’re often very black and white. I strongly believe there are exceptions to this, but generally speaking, I think a lot of issues tend to exist in a more complex grey area. For example, in the hate crime lyric: that is somebody else’s truth, and it’s somebody else’s truth which isn’t often discussed — the perspective of the demented perpetrator — but it’s still somebody else’s truth.”

When musicians didactically take on political issues, Bowness thinks, they often overlook the nuances of these issues and obscure their complex realities, favoring extreme positions over productive discussion. “I feel that often we operate in grey areas, and I’ve found that when musicians attempt to be political and didactic, it ends up being a little too primitive or a little too obvious. And sometimes it can be catastrophically wrong in retrospect as well. So, I might have stronger opinions about some things than others, but I tend to be relatively obsessive and see many, many things in terms of being quite a complex grey area.”

One such grey area is generational divisions. The subject of his song “We Caught the Light”, Bowness recognizes the antipathy toward the boomer generation and a heightened political disconnect between young and old but rejects this generational tension is as clear-cut or inevitable.

“What kind of struck me was that the boomer generation was that generation in my imagination that revolutionized the 1960s, that actually brought in far more radical ideas about environmental awareness, racial equality, feminism. And so it’s quite ironic that they are the most demonized generation, the generation that was closer to millennials, that was closer to the ideals of the current environmental revolution. I feel that there are generations that could talk to one another, but they’re not.

“My experience was of being brought up in the North West, coming of age in a time of great unemployment, great poverty, great social division. So the idealism, optimism, and revolutionary spirit of the 1960s was always something that I found quite fascinating from my position. Being in my mid-teens in the 1980s, I kind of almost fall between the two stools and just wonder if the generations were to sit down and talk they may share more values than they think.”

But while Bowness often creates his lyrics with a particular message in mind or in response to specific political events, he often writes with a lyrical ambiguity to better resonate with listeners.

Tracks like “Never a Place” see Bowness tackle social alienation through drawing on a specific subject-matter, but relaying this to the listener in a form more broadly relatable. “I specifically had in my mind two images. One was of a Jewish child in Germany in the 1930s being casually mistreated by all those around, but the child could not understand. That then put me in the mindset of perhaps what would it be like if you’re a refugee in Britain now where there is a great deal of resentment in certain areas, and an innocent unleashed in a hostile environment. They don’t understand why they’re being othered, why they’re being made to feel different. So in some ways, that was the specific inspiration. But the way in which I’d written it meant that it could apply to anybody who had felt outside of society that was also disability.

“I left it ambiguous to the point that it would apply to somebody who merely felt different in their workplace, different at school, who, it might be courtesy of their attitudes or their images, just felt apart from society. In some sense, it’s an ode to the outsider, but the actual lyrical core inspiration was quite specific.”

With such a committed thematic vision, was there a process behind his selection of sociological and political issues to explore on the record? Not so much. Bowness says the album’s themes arose “spontaneously”. In some instances, it seems his inspiration behind the songs perhaps reveals more about Bowness’ interest in the mysterious and weird than his perspective of wider society.

“I’ve always been quite obsessed with some cults from the ’60s and ’70s; religious cults, Scientology and so on,” he says. With a strong Scientology presence in Manchester during his youth, his father once humored their sales pitch and attended their sessions. “By the second meeting, he knew that this was a religious cult. But for about 20 years, because they had our home address, we got Scientology literature, which I used to love going through as a child.”

More tragically, the song “The Last Getaway” was inspired by the true story of a successful children’s author – a favorite for Bowness to read to his son – later killing his wife and himself in an attack. “For me, it was this tremendous contrast between the sentimental optimism this children’s book that I’m reading to my child and the reality of the ending for the author. In a sense, I found it incredibly sad and a real gulf between the work and the life. So it was a lyric that I just kind of worked at because I was so shocked by the ending that the lyric in a sense almost wrote itself.”

This lyrical spontaneity was common across the album, with the lyrics arising organically as the songs developed. “I didn’t necessarily intend to write them if that makes any sense. Basically, I would write or co-write the music and then write the lyrics and melodies, and arrange it from that point. The lyrics were kind of surprising me with their subject matter. It was almost as if reality was coming in and slapping me in the face at various points.”

Bowness says he’s never believed in making music for the sake of making music and only writes when he feels inspired or driven to do so. For this record, that inspiration came almost immediately upon writing its first track.

“Suddenly, I felt as if there were a feeling and an atmosphere and an emotional, musical direction I could pursue,” he says. “I would say that as soon as that song was written. It was written in the early hours of the night, and there was a particular feeling, a particular set of sounds I was using. I was quite surprised that it managed to be both very intimate yet lyrically be much more about global fears, global concerns. It felt fresh to me.

“I felt an incredible drive to finish this. I think that any album that I work on, it becomes obsessive, it becomes something that I will immerse myself in, and this was obviously no exception.”

In some sense, this was unsurprising to Bowness. With fresh thematic ideas, the album felt like a “homecoming” that offered a new direction to his music. He says that his music can take two forms: either a continuation of his previous album’s themes or a reaction against his past music. This was the latter. After finishing “Love You to Bits”, Bowness was keen to move away from dance beats altogether and explore a new direction.

“I almost kind of wanted to find some fresh, timeless ground that would surprise me again. It reminds me of a comment Dennis Potter once made about his work — you can never escape your limitations; you can never escape your personality. Dennis Potter said that he always felt that he was in the same particular field, and he was finding different patches of grass in that field. I feel this sort of emotional territory that I can never escape. Whether I work in rock music, dance music, there’s a particular melancholy in a particular approach that I’m always drawn back to.

“I think that Late Night Laments was a return to my emotional default setting. It’s a return to what I do absolutely naturally, perhaps for the first time since Together We’re Stranger [No-Man’s fifth album release in 2003] and of course, a lot of things have happened since then. I don’t feel I’m making Together We’re Stranger Part Two because it’s so different instrumentally.

“The feel may be similar, and it may well be that same field that Dennis Potter talks about, but it’s a very different clump of grass that I’m drawing from.”