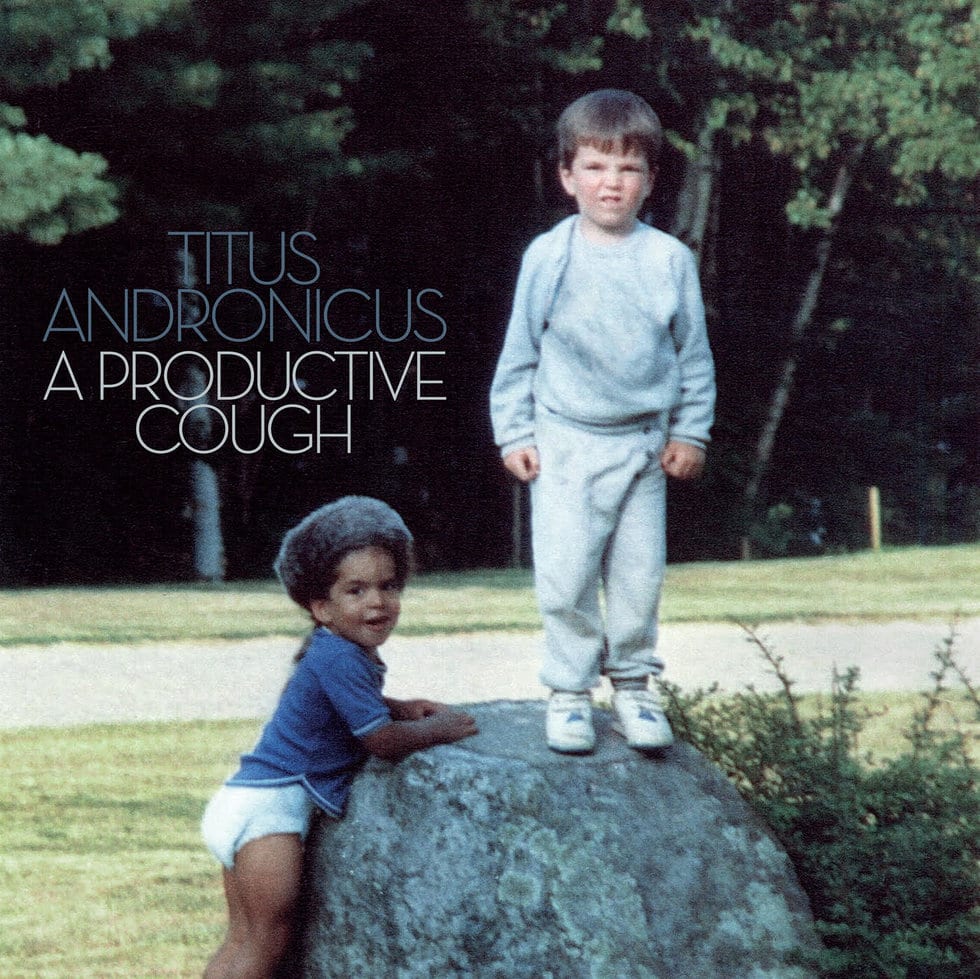 New Jersey outfit
Titus Andronicus (yes, named after the Shakespeare play) has never been content to repeat a formula. After all, they began as a lo-fi indie/punk rock band roughly a decade ago, yet their fourth record, 2015’s The Most Lamentable Tragedy, was a lengthy rock opera broken into five acts. It only fits, then, that the follow-up, A Productive Cough, finds them once again veering in a different direction. Specifically, lead singer/guitarist Patrick Stickles and company seem to be actively conjuring the bitter angst and rustic characteristics of early Bruce Springsteen and Bob Dylan, which makes A Productive Cough affectionately vintage and impassioned—if also occasionally meandering and sloppy.

Stickles sees the record as “the gentle breeze which had been wafting through” their entire catalog. In contrast to the “lead-footed punk anthems of yesteryear”, Titus Andronicus goes for “a subtler, more spacious approach” on
A Productive Cough that emphasizes Stickles’ “soul-baring songwriting” more than ever before, “creating a conversational intimacy between artist and audience”. Aided by pianist Alex Molini, bassist/vocalist RJ Gordon, drummer Chris Wilson, and guitarist/vocalist Liam Betson, Stickles delivers robust slices of rebelliousness that channel folk/Americana/heartland rock more than they do any punk/indie influences.

“Number One (In New York)” kicks things off with a blend of piano chords, earnest vocals, and subtle horns that instantly recalls the beginning of Springsteen’s “Thunder Road”. There’s a comparable working-man kind of defeated elegance to his raspy outcries, too, and it’s hard not to get sucked into its riotous splendor as the track evolves into a thunderous yet beautiful personal mission statement. Equally impressive is the way the arrangement gradually becomes calmer as it closes, with only tranquil chants, light percussion, and other faint instrumentation remaining during the final moments.

In contrast, “Real Talk” captures the joyous, almost drunken ramblings of Dylan’s “Rainy Day Women #12 & 35”. There’s not much depth to the songwriting, but that’s not the point; rather, it succeeds as a fun and explosive jam filled with lively timbres and carefree vibes (especially at the end, when a man yells, “Titus Andronicus! I’m real hype right now!”). Afterward, pieces like “Above the Bodega (Local Business)” and “Home Alone” offer a playful Southern edge (in particular, the former has a great sing-a-long attitude, while the latter is likely the heaviest entry in the sequence, with some piercing guitar work to boot).

There’s a surprising gracefulness to “Crass Tattoo” due to its plaintive blend of ardent female vocals, slow strings, and tight, purposeful piano and guitar chords. As for “(I’m) Like a Rolling Stone”, it’s a remarkably similar rendition that adds a bit more inebriated flair—making it kind of a wasted opportunity, to be honest—while closer “Mass Transit Madness (Goin’ Loco)” evokes a similar persona as “Number One (In New York)” but with a bit more gospel sentimentality and textural variety. All in all, it’s a fittingly cyclical way to end.

Although A Productive Cough feels repetitious and aimless at times, there’s no questioning the level of dedication and skill behind its many bursts of dense boisterousness. As a celebratory callback to the everyman raucousness of certain late ’60s/early 70s singer/songwriters, it works well (and is no doubt most enjoyable with sufficient alcohol); furthermore, its glimpses of serene somberness provide sobering juxtapositions to that majority mood. It’s not an especially varied or original offering, but it is remarkably authentic and engrossing, and for that alone, Stickles and company deserve applause.