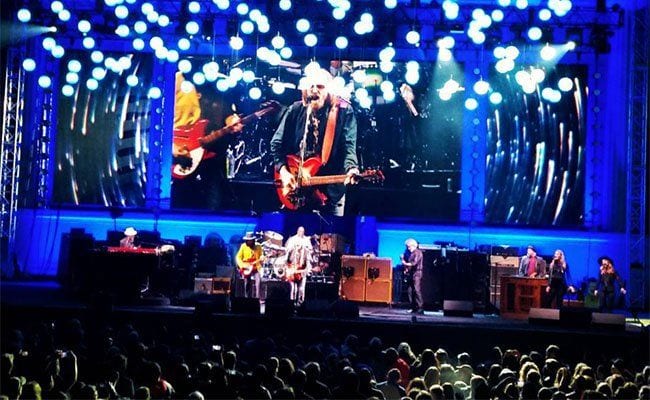 It’s a beautiful late summer evening in the People’s Republic of Berkeley, but there’s a small flux in the space-time continuum. Tom Petty & the Heartbreakers were supposed to have concluded a three-night run at Berkeley’s Greek Theater the previous night, but a sudden case of laryngitis and bronchitis shut Petty down last week. That caused the postponement of shows here in Berkeley and Sacramento, with the show that was supposed to take place last Wednesday now happening on this fine Monday evening.

Was global climate change a culprit in the postponement? Bronchitis is known to be exacerbated by allergic reactions, and allergy season has been reported as growing longer and stronger due to climate change and hotter temperatures. Allergy season in California has become an almost year-round sport for some people in recent years. Whether Petty suffers from such issues remains unknown, but fans here are fortunate that the show was only postponed five days rather than canceled altogether.

The Shelters open the evening with a solid set of guitar-driven rock that rings out strongly here in Strawberry canyon high up in the Berkeley hills, although their live sound seems to lack some of the nuances of their self-titled debut album that was co-produced by Petty. The album sounds a bit like a young version of Petty & the Heartbreakers, while the live sound seems to pump up the volume more with a rawer guitar attack. There’s even one tune that goes into a heavy psychedelic blues space that sounds more like the Black Angels. This jam turns some heads, although it seems there’s little the band can do to get people up out of their seats at this juncture in the evening. But they do get a good number of attendees clapping in time to another song with a bigger hook at the end.

When Petty & the Heartbreakers hit the stage, they’re accompanied by the electric vibe that comes with being a classic rock band on their 40th-anniversary tour. The list of bands that have made it 40 years is not a long one, and there’s, therefore, a sense of history in the air here. There’s also the fact that Petty moved into rock icon status some two decades ago as a member of the Traveling Wilburys in the late ‘80s, conjuring an even deeper level of rock royalty that few can match or even aspire to when one talks about playing in a band with the likes of George Harrison, Bob Dylan, Roy Orbison, and Jeff Lynne. “Mary Jane’s Last Dance” is an early highlight, with the audience up and rocking as the band’s compelling light show kicks in with vibrant colors and imagery. Many bands tour with a stripped down light show, but Petty has long been into the visual side of rock as his creative videos have demonstrated time and again.

“I Won’t Back Down” provides a peak moment as Petty and the band deliver the defiant anthem with a gusto that seems to take on an extra resonance here in the era of the Donald Trump regime. Another gem follows with “Free Fallin’”, a melodic hit from Petty’s classic 1989 album Full Moon Fever that truly stands the test of time. Some spacey imagery helps conjure the song’s mood of transcendence as the Greek starts to seem like it could float off into space as powered by Petty’s music.

The classic vibes from that era soon continue with “Don’t Come Around Here No More”, which conjures visions of Alice in Wonderland for many due to the Wonderland theme of the song’s ultra-classic video. The images here don’t touch on Alice and Wonderland per se, but there’s a psychedelic vortex of sorts projected on the back screen of what has become a colorful sensorium that feels like it offers a portal to another dimension. The imagery is a sensational complement to the music as the band knocks out the shimmering tune, demonstrating that some real thought has been put into providing a multi-dimensional experience.

Petty takes a few moments to introduce the band, with drummer Steve Ferrone introduced as “the new guy since he’s only been in the band 24 years”. Bassist Ron Blair, multi-instrumentalist Scott Thurston, and keyboardist Benmont Tench all receive well-earned applause but guitarist Mike Campbell gets the best story. Petty speaks of going to audition him in their hometown of Gainesville, Florida and being initially turned off at seeing Campbell sporting a cheap Japanese knock-off guitar and even trying to think of an excuse to leave. But Petty goes on to relate how Campbell ripped into a smoking take on Chuck Berry’s “Johnny B. Goode” that instantly converted him into telling Campbell, “You’re in my band for life!”

Petty then introduces a sequence of tunes from his Wildflowers album that begins with “It’s Good to Be King”. The slow, melodramatic tune seems a bit anti-climactic after Petty just spoke of Campbell tearing up a Chuck Berry classic, but the payoff comes when the song builds into a powerful blues jam that soon finds Campbell shredding hot licks more in the vein of Jimmy Page to lead what becomes one of the set’s most electrifying moments. “Learning to Fly” on the other hand finds the band ramping down the original arrangement with an acoustic-oriented flavor, which still works well on such a summer night.

The band dips back into a Zeppish flavor on “I Should Have Known It”, a heavy rocker that seems to borrow a bit from “Black Dog” but which provides an artful showcase for Petty to belt out one of his more compelling vocals. The song also provides another chance for Campbell to rip hot licks on a big jam that gets the crowd rocking again, beginning a climactic ending of the set as it leads into “Refugee” and “Running Down a Dream”. The latter tune might be Petty’s most timeless classic, a sharp-edged bluesy rocker with some memorable riffage and the extra mojo that comes from lyrics that seem to conjure a mystical quest with the chorus of “Workin’ on a mystery, goin’ wherever it leads, Runnin’ down a dream…”

Petty & the Heartbreakers have kept their dream going for more than four decades now, testament to the staying power of great rock ‘n’ roll in an era where naysayers keep trying to argue that rock is dead. But those who understand what rock ‘n’ roll is really about know that rock can never die. That is because there will always be a next generation working to run down that rock ‘n’ roll dream since there are few, if any, other forces on Earth that are as liberating.