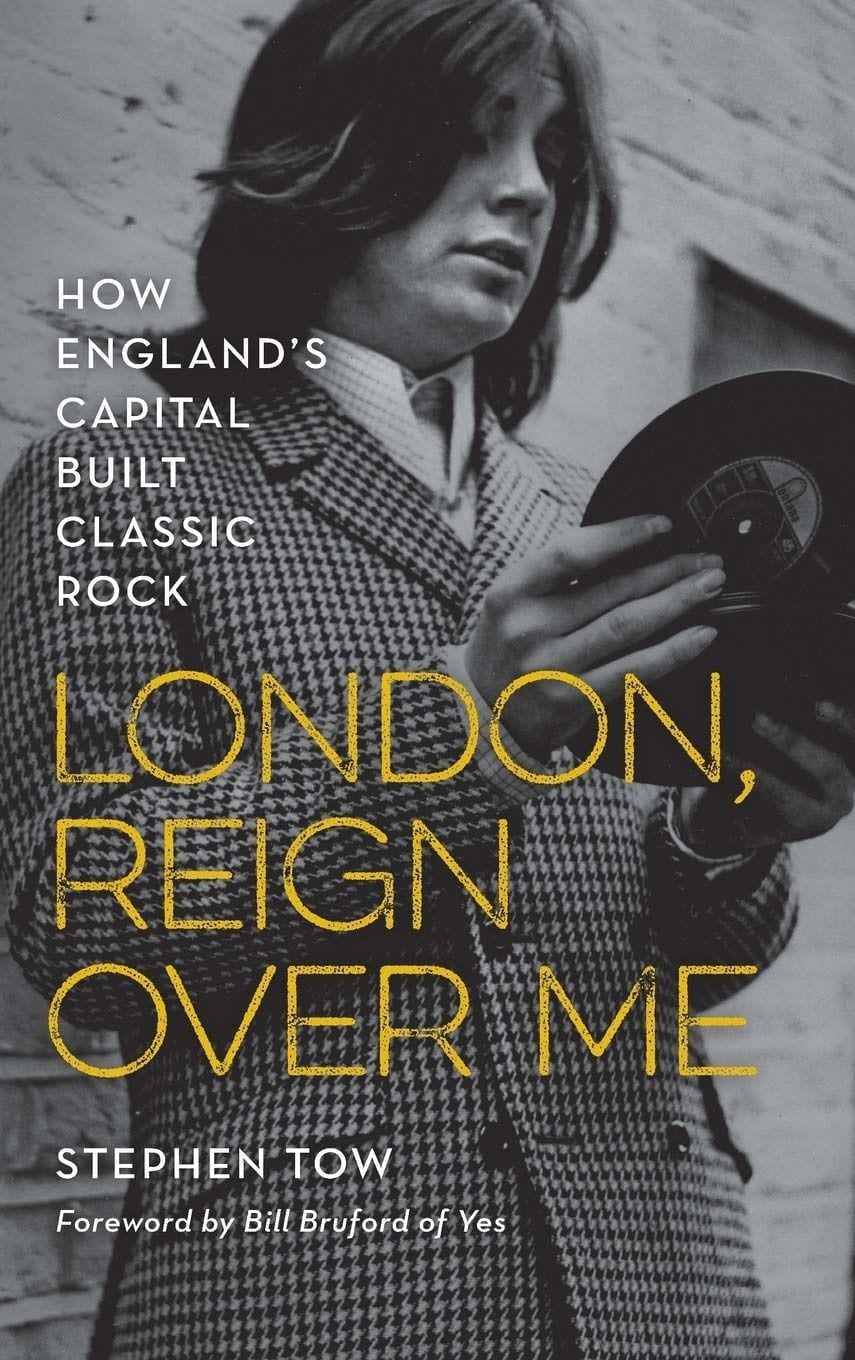 It’s no secret that America and England have long had a symbiotic relationship when it comes to popular music. For the better part of a century, the two countries have influenced each other’s tastes and trajectories in terms of shaping mainstream interests and artistic evolutions. Undoubtedly, the most crucial decade in that respect was the 1960s, and that’s the era historian Stephen Tow explores in, London, Reign Over Me: How England’s Capital Build Classic Rock.

In his latest work, he takes readers on a fascinating, astute, and welcoming tour through the birth of the several genre offshoots—such as progressive rock and folk—to explore the remarkable circumstances that made London and its surroundings such a fertile and significant creative space.

One of the strengths of this book is the inclusion of insights from important musicians, managers, producers, critics, and others of the time. Through both first-hand interviews and vintage excerpts from publications like Melody Maker, Record Mirror, and New Musical Express, Tow embraces the feedback Dave Davies (The Kinks), Judy Dyble (Fairport Convention), Peter Frampton (Humble Pie, solo), Keith Richards (The Rolling Stones), Manfred Mann, and Ian Anderson (Jethro Tull), and dozens of other music notables.

Doing so gives priceless authenticity, humility, and weight to Tow’s already valuable assessments and explanations, so it really feels like you’re being taken along for the ride with the star players, reviewers, and behind-the-scenes craftsman who steered the ships and turned the tides. Indeed, London, Reign Over Me begins with a foreword from iconic drummer Bill Bruford (Yes, King Crimson), who interweaves anecdotes about the era with consistent and valid praise for Tow’s ability to judge it clearly and wisely.

Tow touches upon the pre-classic rock stuff like American blues, skiffle, jazz, and British R&B. Specifically, he argues that English jazz musician Chris Barber—after discovering American jazz as a teen while working with influential guitarist Alexis Korner and trumpeter Ken Coyler, and playing on Lonnie Donegan’s vastly celebrated version of “Rock Island Line”—directly paved the way for those aforementioned genres to take flight in Britain. As he left his mark, other prominent musicians and palettes spread as audiences flocked to digest all they could, leading to the formation of acts like the Yardbirds, the Rolling Stones, the Beatles, and the Animals.

Naturally, Tow also explores many other facets of British rock music in the ’60s, such as the rise of the Mods vs. Rockers rivalry (which formed the basis for the Who’s 1973 masterpiece, Quadrophenia, from which London, Reign Over Me partially got its name). He devotes significant attention to the seeds and blossoming of progressive rock and progressive folk, too, by noting how records like the Beatles’ Sgt. Pepper, the Pretty Things’ S.F. Sorrow, and the Moody Blues’ Days of Future Passed demonstrated more intricate and conceptual leanings. Within a couple of years, huge ensembles like Jethro Tull, Fairport Convention, Pink Floyd, the Strawbs, King Crimson, and Yes would progress things even further, and Tow makes sure readers are made aware of how it happened.

Although his discussions of those eminent acts are praiseworthy, Tow recognizes the importance of artists who don’t get as much attention from the media. A personal favorite is the brilliantly bonkers Bonzo Dog Doo-Dah Band (whose mastermind, Neil Innes, recently passed away). Known for their truly idiosyncratic blend of genre-splicing arrangements and wacky antics, they were the musical equivalent of Monty Python in more ways than one. It’s fair to say that many bands that infuse humor into their music owes a debt to them. (Let’s not forget that their 1967 gem, “Death Cab for Cutie”, inspired the name of one of America’s biggest pop/rock acts 30 years later.) Elsewhere, outfits like the Move, the Small Faces, the Nice, and the Crazy World of Arthur Brown are given their due.

Throughout, Tow highlights the venues and ever-changing [counter]cultural attitudes that allowed these artists to perform and grow a following. For examples, he muses about London’s Eel Pie Island, which held a hotel that offered teenagers “an oasis from the grim reality of postwar life” as artists like Eric Clapton (with John Mayall’s Bluesbreakers), the Who, David Bowie, Jeff Beck (with The Tridents), and Rod “the Mod” Stewart built a following and found their voices. He investigates how the mid-to-late ’60s London folk and psychedelic scenes grew, thanks to clubs like The Roundhouse, UFO, The Cousins, and Middle Earth, as these venues allowed up-and-comers to try out new things and get to know each other. In that way, London, Reign Over Me includes a healthy amount of vivid details about the look and feel of the places that nurtured these musicians.

Despite all of its strengths, there are two major sticking points that might bother some readers: its organization and repetition. Rather than arrange his chapters by band, Tow structures them by genre/movement; while that’s a compelling approach, he subsequently jumps back and forth between artists too frequently and briskly at times. Occasionally, he will focus several consecutive pages on one group, but he’ll also juggle several at once (as if he’s fitting them into a textual Venn diagram). This method isn’t too difficult follow, but it could certainly be a smoother read if the book were arranged chronologically.

Quibbles aside, London, Reign Over Me is a masterfully researched, spacious, and inviting survey of British rock music in the 1960s (and a bit beyond). Those who lived through it and/or are invested in this music may know a lot of this history, but Tow’s extensive insights, engaging connections, and approachable voice makes it an enthralling read, nonetheless.