It’s a sign of the times, maybe, that when one of the characters says at the start of Christian Petzold‘s Transit, “Paris is being sealed off,” the first thought is not of war but of terror. A police van has just raced past with that curious (to American ears) Euro-yodel and it seems almost certain that any moment we’ll be treated to a faux-CNN news crawl on a nearby TV: 20 Dead in Paris Attack. But there don’t appear to be any TVs. No cellphones, either. But the vehicles, clothing, the riot police’s gear, it’s all of the moment. What exactly is Petzold up to?

The director and writer certainly is not in a hurry to tell us. In the meantime, he has us following the hollow-eyed Georg (Franz Rogowski), whose mien is something akin to Rufus Sewell’s lean and hunted look, and is in a hurry to get out of Paris. He may be involved with some kind of underground cell, agreeing as he does to help a wounded man wanted by “the occupying authority” escape their clutches. At the same time, Georg is carrying some letters from Weidel, a man he was meant to help but who committed suicide before they could meet. Weidel has a wife in Marseille, eager to reunite. Things are falling apart fast, with a police roundup, a tense escape on a train, the sense everywhere of jaws snapping shut.

Once in Marseille, the movie opens up and takes in some air. Petzold’s camera luxuriates in the warm Mediterranean tones and the fragrant air of romance, spiked as it is with impending desperation. Georg, who may have had a moral sense before the current situation but has long since jettisoned any such qualms, is now inhabiting a dead man’s identity and working it to get out of the country.

Like many a character that we might expect to find in the type of noir-ish existentialist setting that Petzold has created for his story of slow and creeping dread, Georg is a man of subdued but conflicted emotions. He seems at first little more than your average civilian being tossed about by the tides of bloody history: doing what he must to survive. At the same time, though, those emotions that threaten to tie him to an increasingly dangerous place begin to arise.

First there is Driss (Lilien Batman), the adorable little boy with the deaf mother whom he meets randomly and develops a father-like attachment. Then there is Marie (Paula Beer), the haunted beauty with dangerous romance stamped all over her who keeps running up to him, thinking Georg is somebody else, and then dashing away as though she has seen a ghost. One way or another, these human attachments seem bound to keep Georg circling in this port city filling up with all the increasingly panicked and impoverished refugees needing to get on that last boat out.

Petzold’s story has its frustrations, particularly the looping repetitions of its last third, in which Georg, Marie, and her partner Richard (Godehard Giese) enact a somewhat desultory love triangle. There’s also the stubborn nature of his decision to take Anna Seghers’ 1939 novel about refugees fleeing the Nazis and transpose it roughly to the 21st century. The former, though, while dramatically stumbling, is true in its way to the trapped sensation of the refugee experience—its long boring waits scattered with panicky scurries for sustenance, refuge, or exit. The latter might not make perfect dramatic sense but it skillfully evokes the horrors of the past, with the oblique references to camps and “cleansings” and the mostly unseen but steadily approaching occupying armies, while dropping it abruptly into a modern-day setting.

Jittery in story but somber in mood, there’s something about Transit that resonates strongly in a year when desperate refugees pour over borders while strongmen rail against them. This odd but frequently gripping movie might not have the strict formalist sting of Petzold’s East German drama Barbara (2012) but the same grey overhang of authoritarianism bounds the little flashes of sunny humanity we’re glimpsing here. The restive, anxious mood of survival and love only being possible in an ever-smaller circle of humanity, sadly, cannot help but feel like a crucial document of the time. 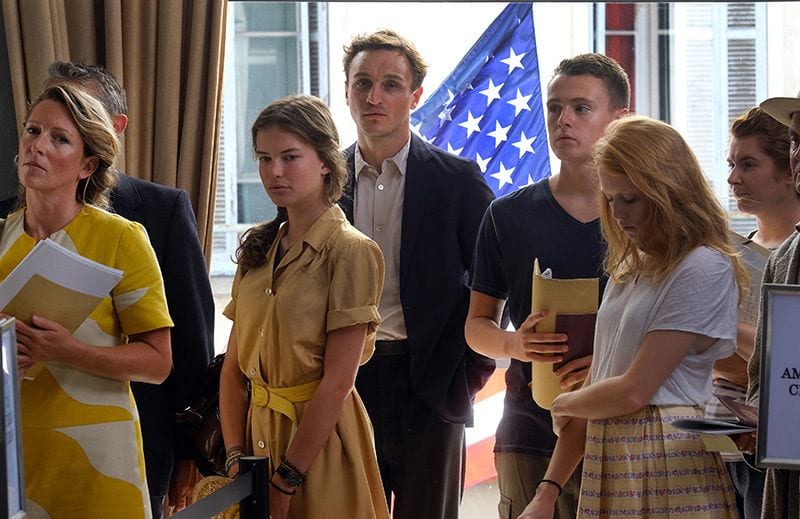