There’s a reason comics gained their first foothold into literary respectability through graphic memoirs. While anything that’s not about anthropomorphic animals or crime-fighters in spandex might seem respectable by contrast, memoir is an especially apt genre for an image-driven form because words can’t always convey the ambiguous complexities of personal experience. Sometimes they’re just too blunt a tool. Sometimes it’s more accurate to evoke undefinable nuances through images rather than declare steadfast facts in words alone.

Travis Dandro‘s King of King Court is an excellent reminder of how evocatively effective comics are in the hands of a skilled memoirist. Because Dandro is focused on moments of his childhood and adolescence, his artistic style shapes that content through a cartoon lens. His figures are reminiscent of Jeff Kinney’s Diary of a Wimpy Kid and Bill Watterson’s Calvin and Hobbes—and there’s even a little Charles Schultz’s Peanuts in there too.

The key is simplicity. Dandro’s cartoon self has empty circles for eyes, a half-circle for a nose, triangle spikes for hair, and often no mouth at all. The style works in part because it indirectly implies that childhood is simple too. This should be a world free of the difficult details of adulthood, like drug addiction, physical abuse, armed robbery, and suicide—things that partially define Travis’s paradoxically cartoon life.

I say partially because, despite the central presence of an abusive father figure, Dandro focuses at least as much on the seemingly inconsequential minutia of his child self’s wandering attention. Yes, “Dad Dave” is shooting up in the kitchen pantry, but look how super cool the ants are climbing on that bottle cap in in the front yard. The fact that the cap came from a Miller Lite bottle doesn’t matter to Travis, but Dandro the memoirist is keenly aware, selecting that detail from all possible details to suggest (without directly stating) that his younger self was unaware of the some of the most troubling details surrounding him. Or maybe young Travis was aware at some level and was diving into childish play to escape. 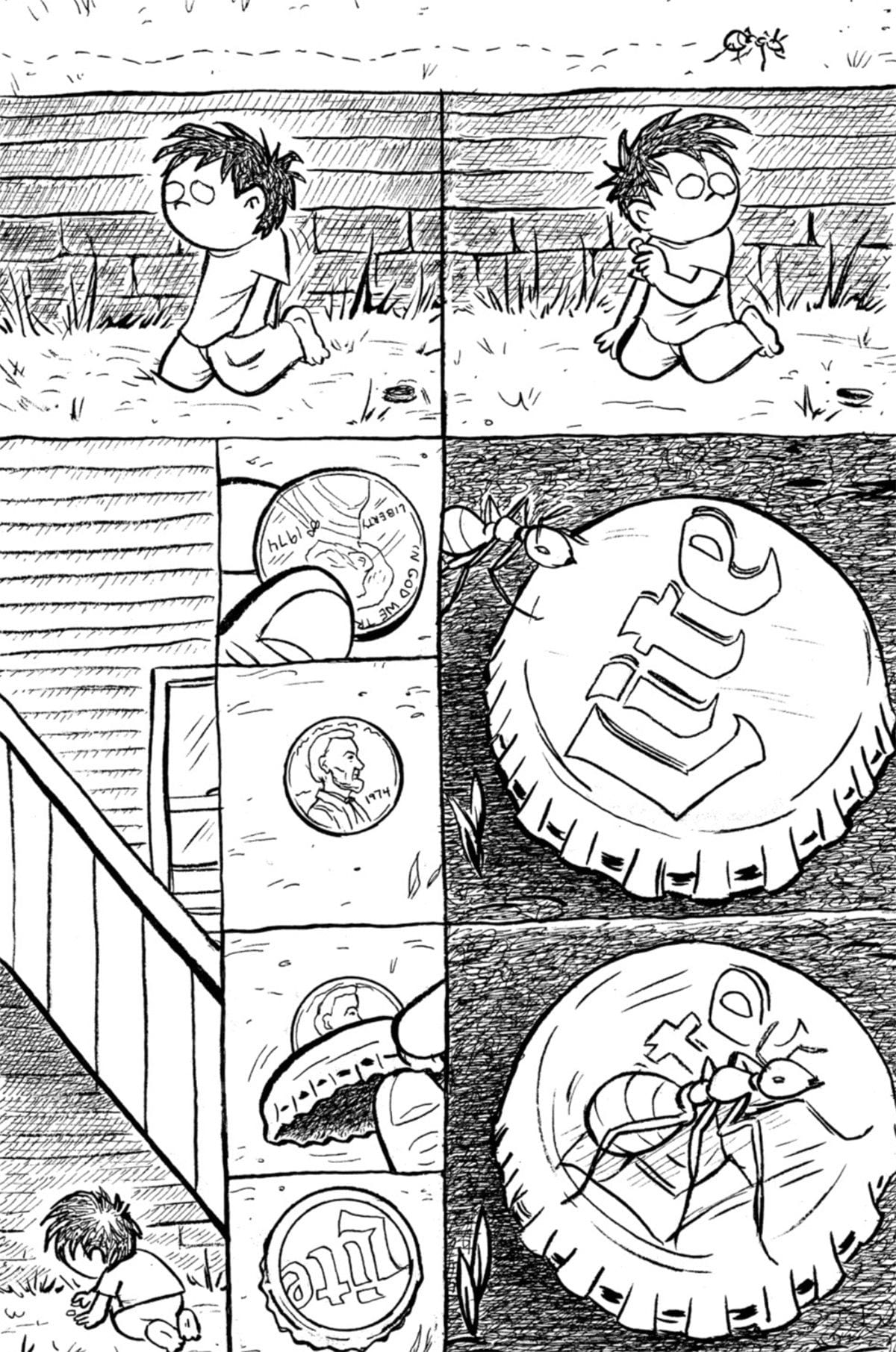 If Dandro were a prose memoirist, he might have to take a stance on that question and eliminate the ambiguity. But as a graphic memoirist, Dandro can instead leave his viewers to interpret his images as they like.

The cover image of Travis walking past a towering tree echoes an interior page, only without the graffiti gouged into the bark—including the word “FUCK” which is both literally and metaphorically over his head. Dandro is artful with his visual metaphors throughout. When the teenaged Travis is sitting angrily brooding about Dave returning after eight years in prison, an apple falls and bounces not far from the backyard tree in front of him. This is after Dandro has already revealed that his younger self was a jerk in high school, drawing a giant penis on a chalk board to prank a teacher. When the temporarily reformed Dave starts using again, a minutely drawn hornet nest grows panel-by-panel on the eaves of the house. During an attempted family beach vacation, a storm tears Travis’s umbrella from his hands and tosses into the trees, where it is later shown mangled.

While the apple, nest, and umbrella resonate metaphorically, each is also part of the Travis’s real world, giving them double meanings. Dandro is equally apt at exploring the imaginary wanderings of Travis’s mind too. He dreams of floating into the sky on the blow-up Bozo punching bag Dave gave him. Later the same toy deflates from a wasp sting, leaving Travis to drown in a flooded landscape. After Travis’s mother has moved the family to another town because Dave was arrested for trying to break into their house, Travis wakes to find Dave covering his mouth and pulling him from his bed. After a ride in a car trunk, Travis stands before a lake as Dave places a knife against his throat—and then severs his neck. Travis jolts awake in his bed—the first indication that it was only a dream. 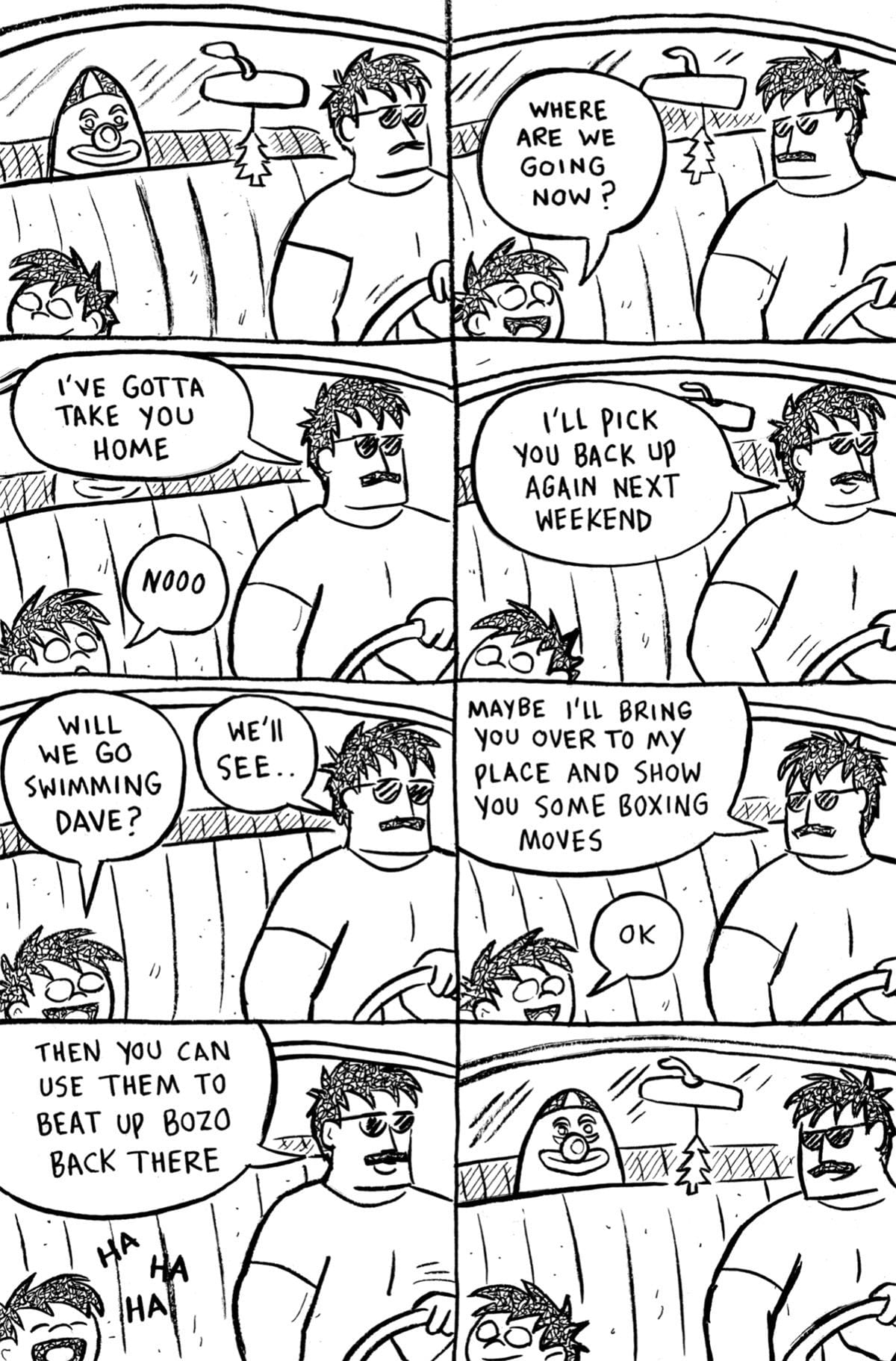 Dave’s fantasy life is worse. Early we witness his hallucination of an unidentified character committing suicide with a rifle and following Dave around, zombie-like. Later Dave dreams of being buried alive, and once, when presumably high on heroine, he begs Travis to help him defend the house from an attacking horde of undead. Dandro reveals late in the memoir that the suicide was Dave’s brother and that guilt is driving his addiction. It’s a central and humanizing detail that turns Dave from a caricature—Dave’s moustache is a rectangle and his eyes permanently attached sunglasses—to a three-dimensional character deserving of sympathy. Though not too much sympathy, since he remains a verbally and physically abusive bully, repeatedly beating Travis, his brothers, and his mother.

Though committed to the cartoon style, Dandro occasionally breaks form to provide a suddenly naturalistically detailed and proportioned image. It happens most often around animals, with a close-up of a bird or fish or flea or wasp, each carefully contrasting the impossibly blocky anatomy of the human characters. The effect reinforces Travis’s escape from reality, as though the natural world were wholly unrelated to his family life. Dandro breaks this pattern only once: a full-page close-up of the precisely wrought lines of Dave’s muscular back as he’s lifting weights in the basement. Rather than escape, here the realistic penwork reveals the depth of the threat.

Though Dandro’s cartoons, like cartoons generally, are composed of simplified shapes with little three-dimensional crosshatching, his style is also atypically dense. Most pages are filled with meticulous scribbles of shadow. Dandro’s layouts further intensify that density by eliminating gutters and drawing panel images inside interlocking frames that unify each page as a single unit. These choices also resonate at a metafictional level once the teenaged Travis becomes a cartoonist within the memoir. Dandro plays a visual game by redrawing his younger self’s portrait of his mother in a style only mildly more cartoonish than the style that is the baseline reality of the story. Accepting a compliment about the realistic vein in the penis he drew on the chalkboard, Travis says, “Yes, it’s the little details that make a drawing come to life.” 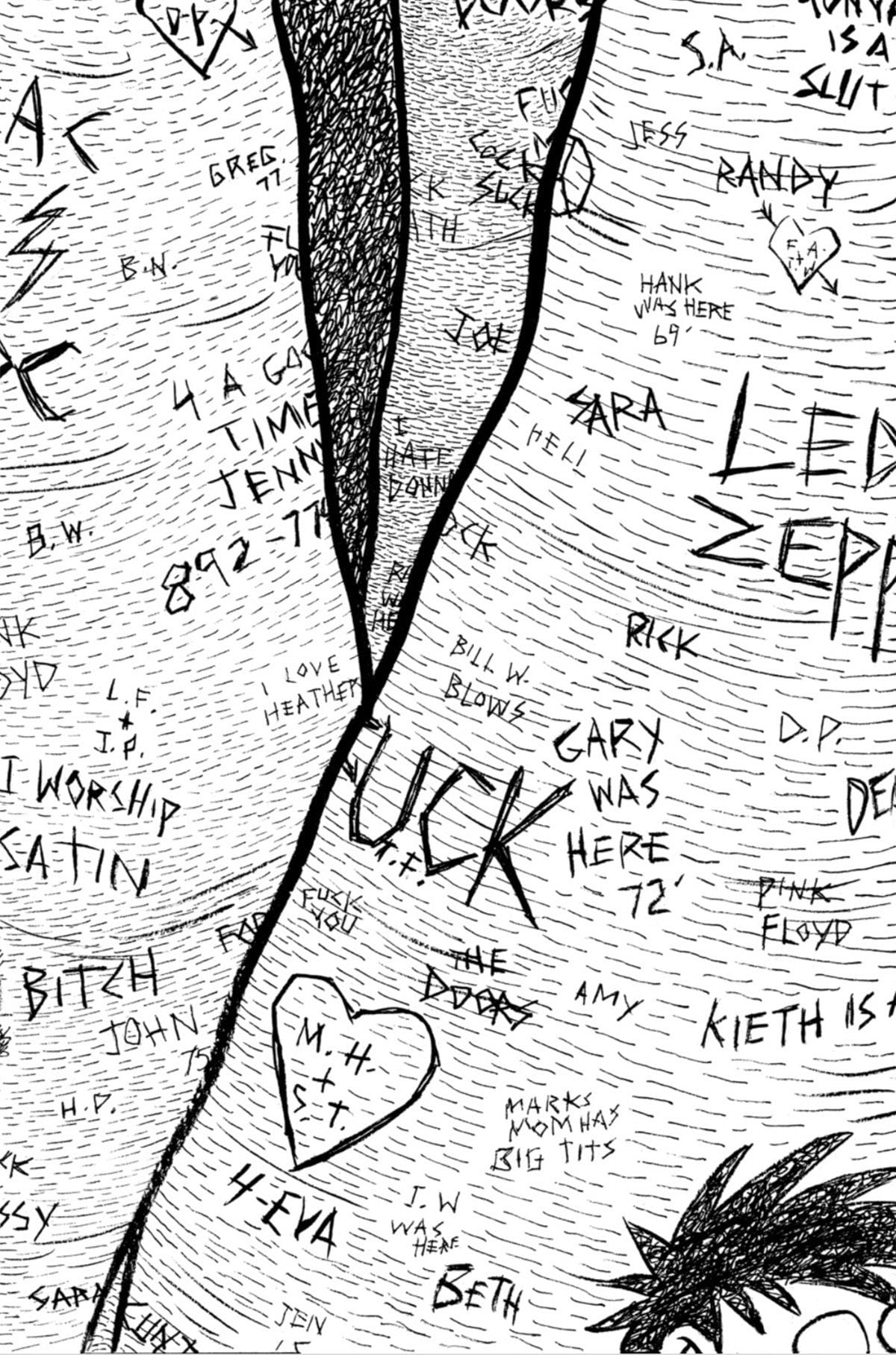