It’s All Hallows Eve in the City of Angels, and the historic Wiltern Theater is the place to be as guitarist Trey Anastasio leads his solo band into town for a celebratory performance. The show isn’t drawing fans from all over the country as when Anastasio’s primary band Phish played Halloween in Las Vegas last year, where the promise of a musical costume set saw the band deliver a truly transcendent performance for the ages with David Bowie’s The Rise and Fall of Ziggy Stardust and the Spiders From Mars. But this show from the Trey Anastasio Band is still the top Halloween ticket in California, drawing in fans from across the state for what remains a relatively rare visit from a musical hero whom many fans consider to possess his own angelic aura.

Phish wowed everyone from longtime fans to the men of Metallica by playing their 13-show “Baker’s Dozen” residency at New York’s Madison Square Garden this summer without repeating a single song, a concept few bands could even imagine as Metallica’s disbelief proved. The Trey Anastasio Band is another animal, however, where the repertoire is really only built out for two or three shows at a time. But this gives Anastasio a chance to relax a little more and just dig into the grooves with his ace band that features a three-piece horn section for a little bit of a jazzier flavor.

He’s still going to throw fans a Phish bone or two, such as opening the evening here with the classic “Sand”, a tune debuted with the original trio version of Trey Anastasio Band in 1999 that went on to become an instant Phish classic that fall. The heavy groove kicks the show right into high gear as costumed revelers have barely had time to settle into their seats before the band drops the fan favorite. Something about the extra horn parts with trumpeter Jenn Hartswick, trombonist Natalie Cressman and saxman James Casey always takes the song to a high level, as do the deep lyrics lamenting the hypocrisy of a distant antagonist: “If you can heal the symptoms but not affect the cause, then you can’t heal the symptoms…”

Some of Anastasio’s fans have a clear preference that politics be left out of the music. But as the members of Phish move into their 50s and the world continues to descend into madness, it seems that Anastasio has been compelled to craft new songs with more of an uplifting spiritual message to help combat the chaos of Trump’s foul domain. The brand new “Soul Planet” is such a song, an upbeat R&B flavored tune featuring Casey and Hartswick singing about the people of the planet coming together.

“Money Love and Change” is followed by a brief “Let’s go Dodgers” chant from local fans still hoping the the Los Angeles Dodgers can rally to pull out a Game 7 World Series win versus the Houston Astros the following evening after dropping Game 6 tonight. But even if they won (which they didn’t), LA Phish fans would still only be able to dream of the once-in-a-lifetime harmonic convergence that occurred when Phish concluded a three-night run at San Francisco’s Bill Graham Civic Auditorium on their fall 2014 tour with a show that reached new levels of triumphantness for local fans after the San Francisco Giants won Game 7 of the World Series just minutes after the show started with a huge crowd watching on a jumbotron out front of City Hall across the street from the BGCA. This prompted a brief “We Are the Champions” tease from the band that instantly became part of Phish legend, spurring a memorable performance that was filled with that triumphant energy throughout the night.

“Dark and Down” visits a deep bluesy space that recalls some of Jimi Hendrix’s Band of Gypsys material, one of Anastasio’s biggest influences with the guitarist once telling Guitar World magazine that Jimi delivered the greatest note ever played on “Machine Gun”. This tune is more along the lines of “Hear My Train a Comin’ ” and finds Trey tearing into some melty blues riffage as keyboardist Ray Paczkowski powers the groove with some deep synth work. “Land of the Nod” gives the whole band a chance to impact the eclectic tune as percussionist Cyro Baptista leads the way before the sharp horn section takes command with Anastasio content to orchestrate until the song breaks into a majestic chorus about awakening from a long sleep followed by some sweet melodic guitar soloing.

The energy in the theater soars with the ever feel good groove of “Gotta Jiboo”, another Trey Anastasio Band/Phish crossover that always ignites a raucous dance party with the horns adding an extra New Orleans-style flavor to the proceedings. The band finally pays homage to the holiday by summoning the ghost of drummer John Bonham to close out the set with a smashing rendition of Led Zeppelin’s “Dazed and Confused”. Fronted with a powerful vocal from Hartswick, the audience oohs and ahhs as the band moves into the song’s classic jam section where Anastasio cuts loose with full classic rock power riffage to electrify the theater. 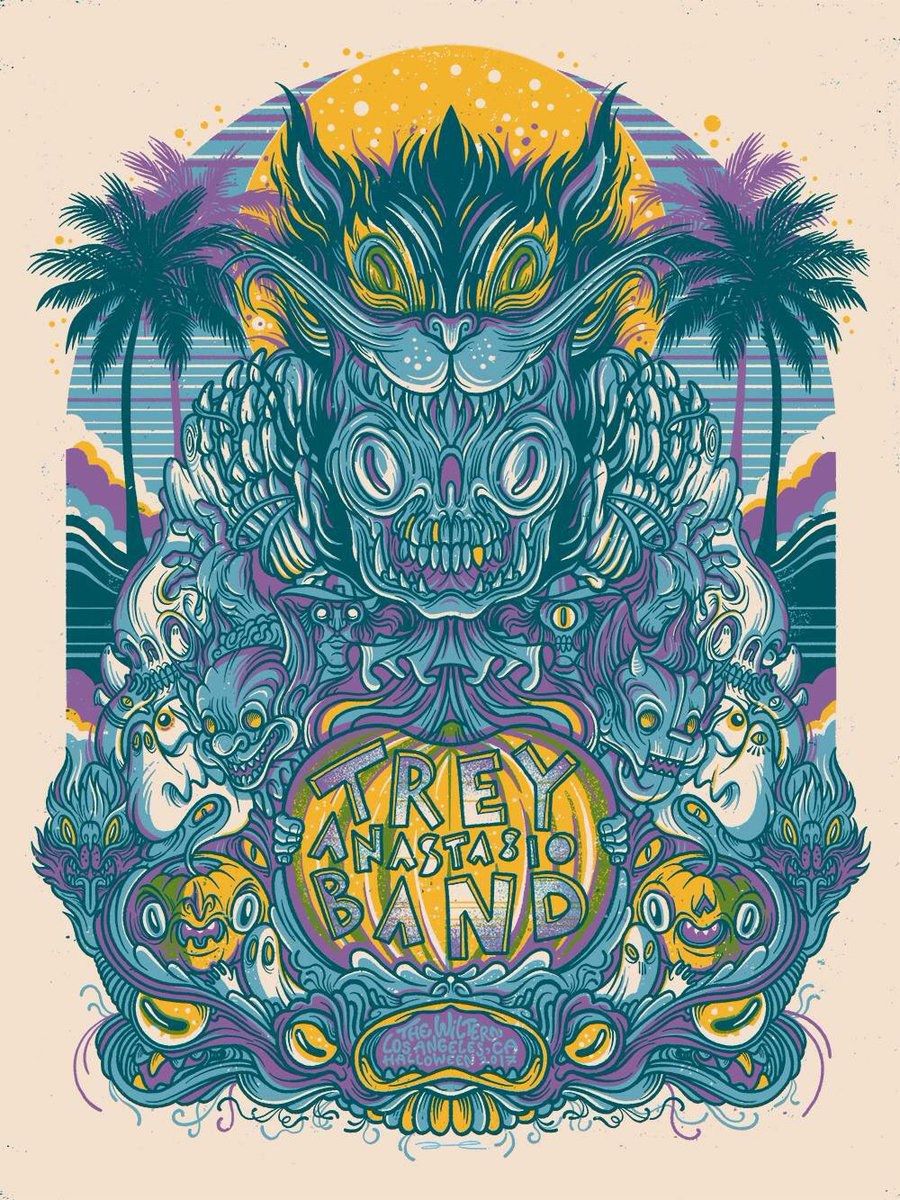 Anastasio wastes no time moving to full Jedi power in opening the second set with “First Tube”, a soaring instrumental to complete the 1999 Trey Anastasio Band/Phish trifecta. Again powered higher by the horn section, the infectious groove gets the Wiltern balcony literally bouncing as the band rocks out on the perennial fan favorite as Trey closes the tune in traditional fashion by raising his guitar like a lightsaber to conjure maximum psychedelic feedback. Often held back to the encore slot, the song sets the stage for a high energy second set.

Some of the songs on Anastasio’s debut solo album from 2002 have come to seem like old warhorses that have been ridden a bit too long at this juncture, but “Night Speaks to a Woman” is a clear exception. The funky dance groove never fails to conjure a hot jam and the backing vocals from Hartswick and Cressman always seem fresh. There’s something about the progression that inherently opens up for exploration, as bassist Tony Markellis and drummer Tony Lawton lay down a foundational groove for fluid multi-dimensional leads from Paczkowski’s piano and Anastasio’s nimble guitar riffs. When the ladies add their backing vocals, there’s an extra bliss level that makes this one of the top jams of the night.

The new “Set Your Soul Free” finds Anastasio offering more uplifting spiritual sustenance as he implores fans to “roll with the funk now, turn it around, burn it down, set your soul free, we’re all here together in a spirit family, everybody’s dancing, everyone can see, burn it down, set your soul free”. The jazzy bluesy sound of “Liquid Time” keeps the metaphysical soul-freeing vibe going with one of the band’s most dynamic tunes. The jam doesn’t go quite as deep as did it at the High Sierra Music Festival this summer, but it keeps the set’s energy building strategically. The set soars with “Everything’s Right”, one of 2017’s best new songs in all of rock. Debuted with Trey Anastasio Band in the spring and then brought to Phish in the summer, Anastasio has spoken of collaborating with long time lyric partner Tom Marshall to come up with the song as something of an antidote to the regular onslaught of depressing news that has accompanied Donald Trump’s apocalyptic reign of avarice.

“Everything’s right, so just hold tight… focus on today, you’ll find a way… this world, this crazy world I know, it turns, it turns, and the long night’s over and the sun’s coming up, everything’s right, so just hold tight”, Anastasio sings with the ladies harmonizing behind him to generate both an uplifting anthem of personal empowerment and a melodic jam vehicle that brings the entire audience into a collective groove of spirit family unity. “Valentine” keeps things flowing with a melodic horn-powered jam where Hartswick and Cressman again seem like angels as they harmonize with Anastasio on the upbeat tune about transcending the darkness around him to rise above with soaring vocals from the ladies on the smooth outro jam.

The three hour-plus show winds toward a finish with the band’s staple cover of Gorillaz’ “Clint Eastwood”, with Hartswick starring as torchy chanteuse before another hot jam on “Mr. Completely” to close the set. There’s been only two covers in the show, but the Trey Anastasio Band has delivered a repeatedly uplifting Halloween fiesta to raise the spirits of everyone present. The encore is a treat for the lovers in the house with the romantic “Drifting”, another melodic jam vehicle that shines extra bright in the balcony as translucent lighting effects on the theater’s ornate ceiling makes fans feel like they’ve been immersed in a higher dimension. Anastasio’s music is know to have that effect and the jammy encore here delivers again.

The show won’t go down in legend like the 2016 and 2014 Phish Halloween shows in Las Vegas, both easily among the greatest performances in rock history. But it’s been a blast, and there’s a sense in the air that certain metaphysical demons have been held at bay on this All Hallows Eve thanks to the musical magic of the Trey Anastasio Band.