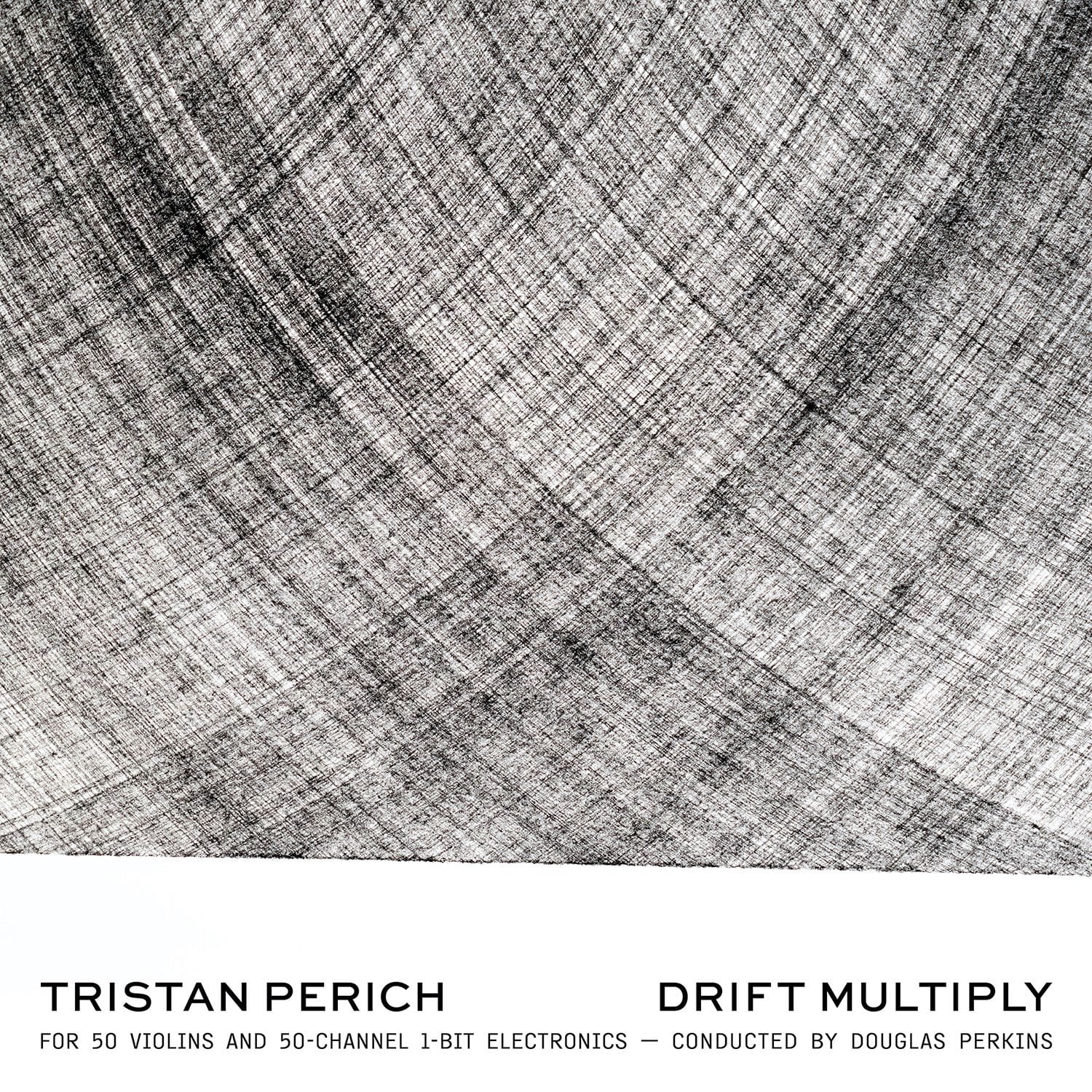 If you’ve ever had the experience where an artist’s statement ends up being more tantalizing than the work it describes, Tristan Perich‘s Drift Multiply flips the script on that experience. In this case, the music on Drift Multiply outshines the inspiration suggested by Perich. Perich is certainly a thoughtful artist working with a fertile concept. But knowing about this music’s building blocks before listening imposes something of a distraction here, as it primes the listener to expect a highly left-brained experience borne of the New York-based composer’s fascination with numbers and code. The surprisingly fluid Drift Multiply eludes any stereotypes you might have based on how the music was constructed. And, for the most part, the album falls about as far from synthetic-sounding as music gets.

Since the arrival of his 2004 release 1-Bit Music, the first album ever to be released in microchip form, Perich has worn his fascination with 1-bit technology on his sleeve. 1-Bit Music wasn’t so much a recording in the traditional sense, but more like a device—a 1-bit circuit stored inside a CD jewel case that “performed” the music Perich had programmed into its primitive wiring. (Listening required plugging headphones into a jack built into the CD case.) As Perich has explained numerous times, 1-bit technology represents the crudest transmission medium for digital information. You can think of 1-Bit Music and its similarly packaged follow-ups, 2009’s 1-Bit Symphony and 2016’s Noise Patterns, as Perich’s answer to wind-up musical boxes, the products of a 21st-century tinkerer who works with long-antiquated hardware from the early days of home computing.

With Drift Multiply, Perich significantly broadens his ambitions’ scale and reach. This time, he composed a continuous piece of music for 50 violins and 50 loudspeakers, with each of the speakers connected to a custom-built circuit board programmed to output sound in 1-bit audio, essentially magnifying the scale of 1-Bit Music 50 times and exponentially increasing the connection points between the various layers of sound. Perich’s highbrow observations about tone—along with his affinity for terms like noise, white noise, and oscillation—lead one to expect that the basis of the art here is to subject the violin lines to a destruction process, the signal chains acting as a kind of symphony of car compactors. But it’s only late in the course of its 70-minute runtime that Drift Multiply veers towards anything approaching the abrasion of low-resolution static.

Still, during those moments, what Perich might refer to as “noise” never serves the function of abrasion for its own sake. On the contrary—none other than modern composition giant Steve Reich has marveled at how Perich yields music from the tools he uses. “My gosh,” Reich told music journalist Ben Ratliff in 2018, “who would think of electronic chips as summoning up anything as beautiful, musically, as that?” Even self-identifying fans of drone-based musical forms might find themselves taken aback by the richness of detail here as all the different threads of sound interweave. At points, the violins seem to collapse into a single voice, with Perich and conductor Douglas Perkins guiding them to speak in a near-whisper. At other times, all of the individual melody lines blur together into something not unlike hazy synth tones.

Initially, the music presents itself as strangely straightforward and even basic. But, impressive as it is to hear the violins behaving in unison, these techniques would quickly grow one-dimensional without variety. The album, a pristine rendition of the composition (recorded mostly in 2019, without an audience present, at the De Doelen concert hall in Rotterdam, Netherlands after premiering the year before at New York’s Cathedral of St. John the Divine), showcases Perich’s knack for infusing the music with dramatic escalation. Perich is even able to create a sense of shifting topography, a feeling of traveling from one type of sonic landscape to another, in the way a given passage leads to the next.

“Section 8”, for example (the tracks are named “Section 1” through “Section 10”) begins with a cold buzzing sound against successive washes of static that recall the insistent—and rather organic—lapping of ocean waves. Clusters of the string ensemble begin to flutter out of the noise, conveying a deeply mournful quality before swelling into a cacophonous wall that becomes overwhelming and disorienting and gives the listener a slightly (though not unpleasantly) queasy/lightheaded sensation. Though Perich is completely untethered by any kind of narrative arc and clearly likes to take his time allowing moods to develop, his ability to slide in and out of contrasting emotions draws on the same finesse required of a film composer.

Indeed, fans of film scores, minimalism, avant-garde composition, ambient electronic music, and drone should all find much to sink their teeth into here. Perich certainly isn’t the first to integrate those forms. His method of assembling them into a unified system—his distinct physics of sound where an individual violin line can both blur into the background and stand out simultaneously—would certainly have been impressive enough. Perhaps Perich’s ultimate feat is the way he’s come up with a long, drawn-out piece of music that’s this inviting despite itself. As cerebral as Perich’s approach seems to be (he has, for example, released printouts of binary code with his music in the past),
Drift Multiply requires zero thinking or analysis to enjoy. Listen attentively, though, and it becomes apparent that this album is a game-changer on multiple fronts. Consider it essential listening, regardless of your tastes or listening background.