Troy: Fall of a City
David Farr
BBC One (UK) Netflix (US)

The British-American miniseries Troy: Fall of a City will, unfortunately, probably be forgotten fairly quickly. It flopped both critically and commercially, which means we’re unlikely to get new seasons continuing the story in the Odyssey, the Aeneid or the Oresteia.

It’s a shame that the show didn’t garner more attention, as there’s much here that’s very interesting. Like Wolfgang Petersen‘s 2004 blockbuster Troy, the plot of Troy: Fall of a City is based mostly on Homer’s Iliad. But while the Classical epic kicks off in medias res, literally in the middle of an argument nine years into the topical Greek war, this eight-episode series begins much earlier in the timeline, looking at the lives of the characters (particularly of the Trojans) before the war and drawing on extra-Homeric tales in the process.

The result is a filmic adaptation of mythological material that is as interesting as it is usually glossed over (and the unfamiliarity of the public with these texts is, perhaps, partly to blame for the series’ commercial misfortune). The most outstanding example is probably the competition between the goddesses Hera, Aphrodite and Athena, who request the mortal Paris to judge which among them is the most beautiful. The build-up to that scene is so carnal and essential that on its merit alone the first episode emerges as the most successful and memorable of the series. 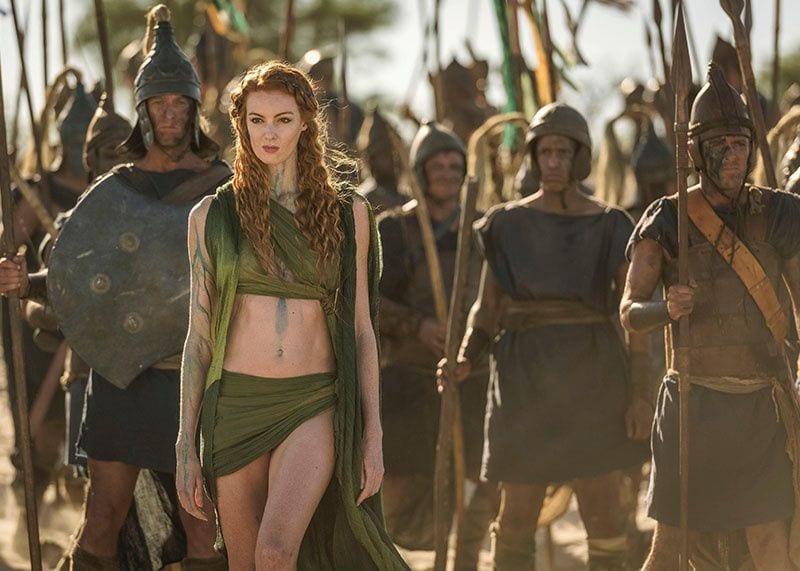 It also introduces what is by far the most interesting aspect of the series; namely, the inclusion of the Greek gods. These are presented as anthropomorphous, played by real actors, and speaking standard lines of dialogue. I realise this may not seem like a big deal if you recently came back from watching Avengers: Infinity War and witnessed Thor strutting around and saying “farewell and good luck, morons”, but in the context of modern representations of Classical myth, it’s a pretty radical choice.

There has been a tendency, ongoing from at least the mid-20th Century, to erase or at least heavily downplay the divine element in Homeric narratives. Contemporary retellings and reinterpretations of the original epics, such as the aforementioned Troy film, or in literature, such as Alessandro Baricco’s Iliad, Margaret George’s Helen of Troy, or Alice Oswald’s Memorial, each do away with the gods almost completely, even though they played an essential role in the old texts as characters in their own right. 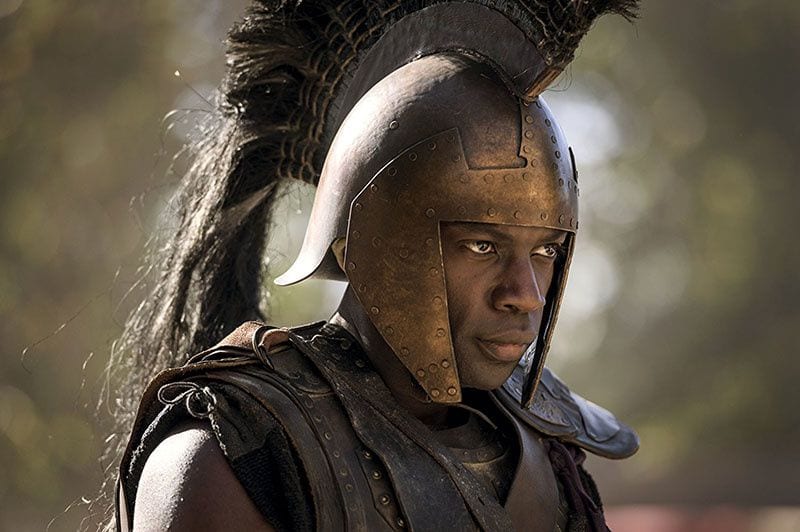 Troy: Fall of a City breaks this trend and approaches the matter of the gods with surprising fealty to the Homeric tradition, both stylistically and in terms of content. Or at least, it does so at first. It’s unfortunate (or should I say tragic?) but the gods recede into the background about halfway into the series, as Zeus (Hakeem Kae-Kazim) for some reason orders all of them not to intervene and let the mortals sort things out among themselves. (There was a similar ban in the Iliad, but it was first broken and eventually altogether lifted). This is such a wasted opportunity, especially as the series only makes use of a handful of gods from the divine platoon available in Greek mythology.

Speaking of inclusion, the big talking point for this series is, of course, the decision to cast black actor David Gyasi as Achilles, as well as the aforementioned Kae-Kazim as Zeus. Less discussed but also significant Is the selection of Alfred Enoch as Aeneas. 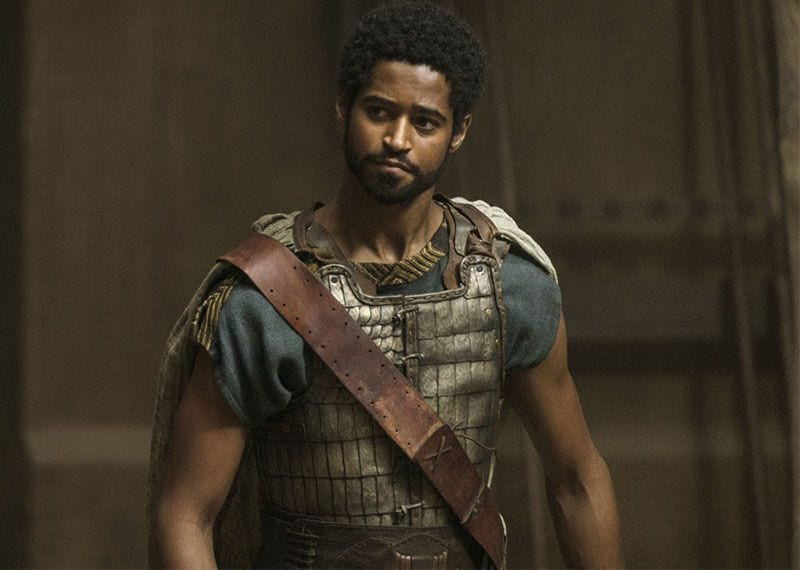 I think we can comfortably gloss over the tedious racist backlash, but we may pause on the debate that followed for a minute. While Troy: Fall of a City did little to push forward our discourse on race and privilege, it did prove revealing in other ways. For example one critic, Jimi Famurewa, defended the diverse casting decision by arguing that ‘it’s what Homer would have wanted’. This’s interesting, because it’s exactly the right answer and exactly the wrong answer at the same time.

It’s the right answer because critics who rail against the “political” nature of a black Achilles miss the point that Homeric texts have always been employed as interpretative springboards, even as far back as the Romans (the Aeneid is itself essentially a reinterpretation of Homeric literature, with a strong political component of its own). Authors used the Homeric texts to build translations, deviations, reimaginings, blendings, intertexts, etc., that would convey their own ideas and those of their times, be the ideas aesthetic, cultural or (why not?) political. The modern Iliads that I listed above are such an example, but even the translations, from the Renaissance right down to the present date come equally loaded with their own agendas and cultural imprints (the latest, hip-hop version of the epic is a perfect example of what I mean).

So if there ‘ one story in which changing the established ethnicity of a character, even if it’s done for purposes other than the (itself worthy) cause of diversifying our story-telling tradition and industry, that is precisely the Iliad. Self-avowed puritans of the text are mendacious, and they know very well that there can be no such thing as a retelling of the story in its original, ur-form: if we want to be true to the text, the Iliad is practically impossible to convert to film. We’d stumble as early as in Book II, when attempting to render the (in)famous Catalogue of Ships. 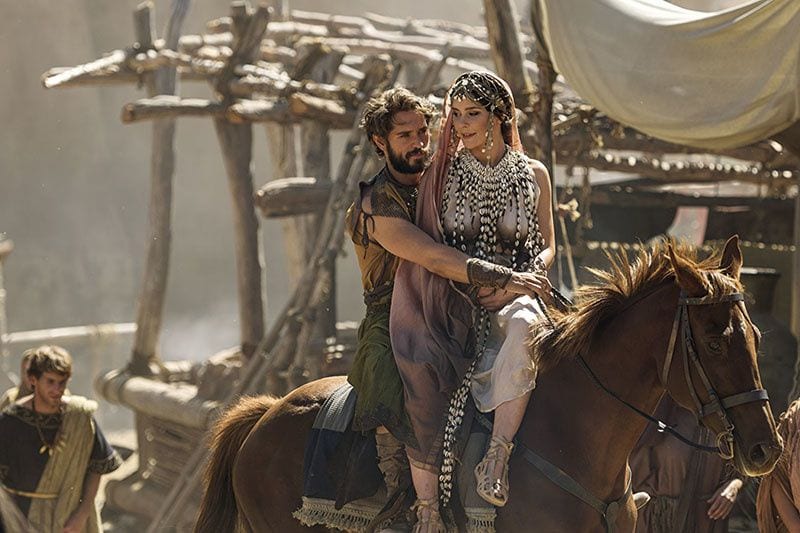 It may be worth mentioning, at this point, that the recasting of Achilles is certainly not the series’ only deviation from the old poem. Others include the vilification of the character of Menelaus, the resolution of the fate of Briseis, the erasure of Aeneas’ family background, the absent reconciliation between Agamemnon and Achilles – replaced by an act of ignoble trickery on the former’s part – and a reimagining of the circumstances surrounding the whole Trojan Horse stratagem. The casting of Gyasi happens to be the one amendment that received all the attention, but these other alterations are all equally in/significant in the grand scheme of things).

To the extent that speaking of authorial intention with Homer makes any kind of sense (the man is himself a quasi-mythical cipher), Famurewa is right. Bending Homer’s story is what he would have wanted, or to phrase it more precisely, it fits in perfectly with the spirit of the original text and its role in modern culture. At the same time, as I mentioned, Famurewa is also wrong, inasmuch as he shows no awareness of the Iliad‘s unstable textual nature, and instead explains his argument thusly: “Firstly, there’s the question of Homer’s intentions upon crafting this martial epic at least 2,700 years ago. […] Yes, one passage of The Iliad refers to Achilles’ fair hair, but there’s also the suggestion that he was over 10 feet tall.”

Unless the writer was deliberately equivocating, this is quite the howler. There are extra-Homeric myths attributing that colossal size to Achilles, and much is made of his supernatural strength, but there’s no reference to his stature in the Iliad or in the Odyssey. I’m not singling this out to send barbs at this particular reviewer, but to provide an example of a wider issue, namely, the abysmally low standards of Classical discourse in contemporary pop culture.

I went looking for reviews of Troy: Fall of a City before I wrote my own, and the first one I found (on YouTube) yielded this line: “And I do get that, whatever that scene is, that’s the scene from the epic, like Achilles stands outside the city walls and yells for Hector.” Again – there’s no such scene in the epic, no matter how deeply-rooted or iconic this vignette may have become in popular culture. As I continued investigating the critical reception to this series, I kept stumbling (not to my surprise) in positively endless misquotings, misreadings, misrepresentations of Homer, to a degree that would be unthinkable if we were discussing, say, Biblical mythology or the Shakespearean canon.

Stunningly, one of the most out-of-touch comments was by the show’s own creator and co-writer, David Farr.

I wanted to tell the other side because we know the Greek story so well. If you look at the story from the Trojan point of view it becomes a very different tale. The Greeks are a western force on an eastern shore demanding justice and retribution, and I think that resonates particularly strongly with a modern audience. We can all think of images we’ve seen from this century and the last which might remind us of the fall of Troy.

It sounds like Farr is presenting his show as a revisionist narrative in the guise of post-colonial tales told from the perspectives of conquered peoples. Considering that he treats Greek mythology with such unusual respect in the series, I’m genuinely baffled as to where these arguments came from. One of the salient features of the Iliad – and indeed one of the reasons why it was always considered so modern and ahead of its time – is precisely the fact that it’s anything but a one-sided account. The narrative shifts from one warring army to the other, from outside to inside the city walls, giving space and voice to the women inside the city and the families of the soldiers. The character who gets the most attention is Achilles, sure, but the author certainly doesn’t display any ideological fondness for a particular side. True, Troy: Fall of a City films some mythological material that usually receives less attention – but that’s because the series looks at myths that take place long before the beginning of the war, and not because it ‘takes a different side’. Making this type of claim about the Iliad is roughly as absurd as saying that we should make a new version of John Milton’s Paradise Lost because, you know, we never get to see the perspective of Lucifer.

It may seem like I’m nitpicking, and maybe I am. Ultimately, none of these issues are of much consequence on either the original text or the BBC series, both of which have a dignified life of their own. Nonetheless, the discourse surrounding the show throws a very bright flare on the status of Classicism in modern culture. Homer specifically, and Greece and Rome generally, are valued very little on their own terms, and are used like “ping pong balls”, if you will, in political and cultural debates of whatever nature. The politicisation of Classicism is, of course, nothing new, and has been indulged in by all Western cultures from as far back as Charlemagne. Its near-ubiquitous vulgarisation, though, is very much an invention of our time.