From the visionary mind of Lisa Hanawalt comes Netflix’s new animated raunchy comedy starring two anthropomorphic birds, Tuca & Bertie. While Hanawalt is best known for her animated work on the critically acclaimed Hollywood satire BoJack Horseman, Tuca & Bertie feels more surreal and experimental in form. In terms of tone and plot, it feels like the first-cousin of Comedy Central’s Broad City and the CW’s Crazy Ex-Girlfriend.

The series focuses on the close friendship and codependent relationship between a boisterous toucan named Tuca (voiced by Tiffany Haddish) and an anxiety-riddled song thrush named Bertie (voiced by Ali Wong). Tuca, who describes herself as a “friend, hero, connoisseur of snacks, and wearer of short shorts”, works odd jobs, enjoys partying, and has an “anything goes” mentality. Bertie, on the other hand, is a type-A personality determined to advance her career at her workplace (naturally named Conde Nest) and to take her relationship with her boyfriend Speckles (voiced by Steven Yeun) to the next level.

The first episode, “The Sugar Bowl”, sees Tuca moving out of the apartment she shared with Bertie since their college days so that Speckles can move in. The remaining nine episodes examine how the changes in Bertie’s personal and professional life and Tuca’s refusal to grow up affect their relationship.

Tuca & Bertie is decidedly female-centric. It gives visibility to many issues women face on a regular basis – from being catcalled on the streets to being sexually harassed in the workplace. The series also celebrates the female body and form, and features a plethora of boobs: boobs on pastries, on plants, and shaking on buildings.

On the second episode, “The Promotion”, Bertie’s left boob is anthropomorphized after one of her co-workers, a sleazy cock named Dirk (John Early), comments that Bertie is wearing a tight sweater because she’s looking to ask their boss Holland (Richard E. Grant) for a promotion. “I’m sure Holland will give you whatever you ask for,” Dirk winks and chuckles. Bertie is left speechless, but her boob leaves her chest and protests: “No, absolutely no. I will not with this shit. I am finished. I am done with today. I need a drink.” She puts on a hat, grabs her purse, and walks away.

Bertie reports the incident to the head of HR, an oblivious goose who dismisses her, saying: “Well, he probably meant it as a compliment.” She then hands Bertie a pamphlet that explains “How to flirt responsibly in the workplace… and land the man of your dreams!” This humorous scene serves as a sharp commentary on the inadequate and insufficient responses to cases of sexual harassment in the US that leave women feeling frustrated and defeated and discourage others from speaking up.

Tuca & Bertie further critiques male predatory behavior in one of the subplots that sees Bertie pursuing her passion for baking. She takes on an apprenticeship with the town’s best pastry chef, a dazzling penguin known as Pastry Pete (Reggie Watts). From day one, he expects Bertie to have a “yes, sir” attitude, manipulates her psychologically, and touches her inappropriately. 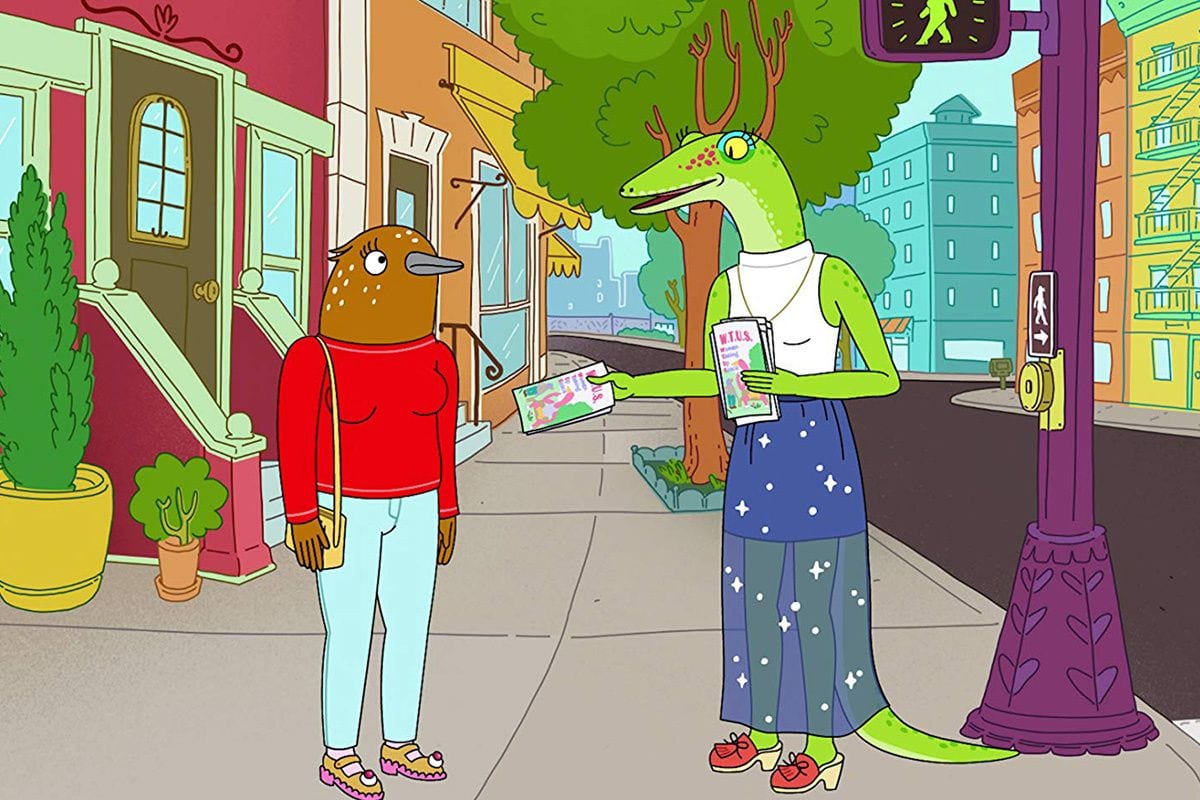 On the standout episode, “The New Bird”, Pastry Pete hires a new apprentice and does the same to her. However, the new bird reacts and calls him out for being a creep. He dismisses her, saying: “Some people can’t handle the rigors of this job.” Bertie herself attempts to rationalize the situation. She explains to the new bird: “You don’t understand. It’s just part of the job and how he teaches. He’s very passionate.” As the new bird quits and walks away, Bertie is filled with shame.

Pastry Pete, for his part, is remorseless and the only consequence he suffers is that a giant hawk takes a literal dump in his mouth on the final episode, “SweetBeak”. Tuca & Bertie here illuminates how little these men suffer for their abusive behavior and how quick society is to forgive them simply because they are considered to be creative geniuses.

While Tuca & Bertie sometimes feels like an all too familiar sitcom and takes time to find its footing, it excels when it goes deep into exploring the root causes of Bertie’s insecurities and anxieties. Bertie, for example, reveals to Tuca that she was sexually assaulted when she was 12-years-old in the heartbreaking ninth episode, “The Jelly Lakes”. The show is also to be celebrated for putting female narratives, female directors, and actors of color front and center (recurring guest stars include Nicole Byer and Laverne Cox) – a rare feat considering that animation continues to be a white and male-dominated industry.