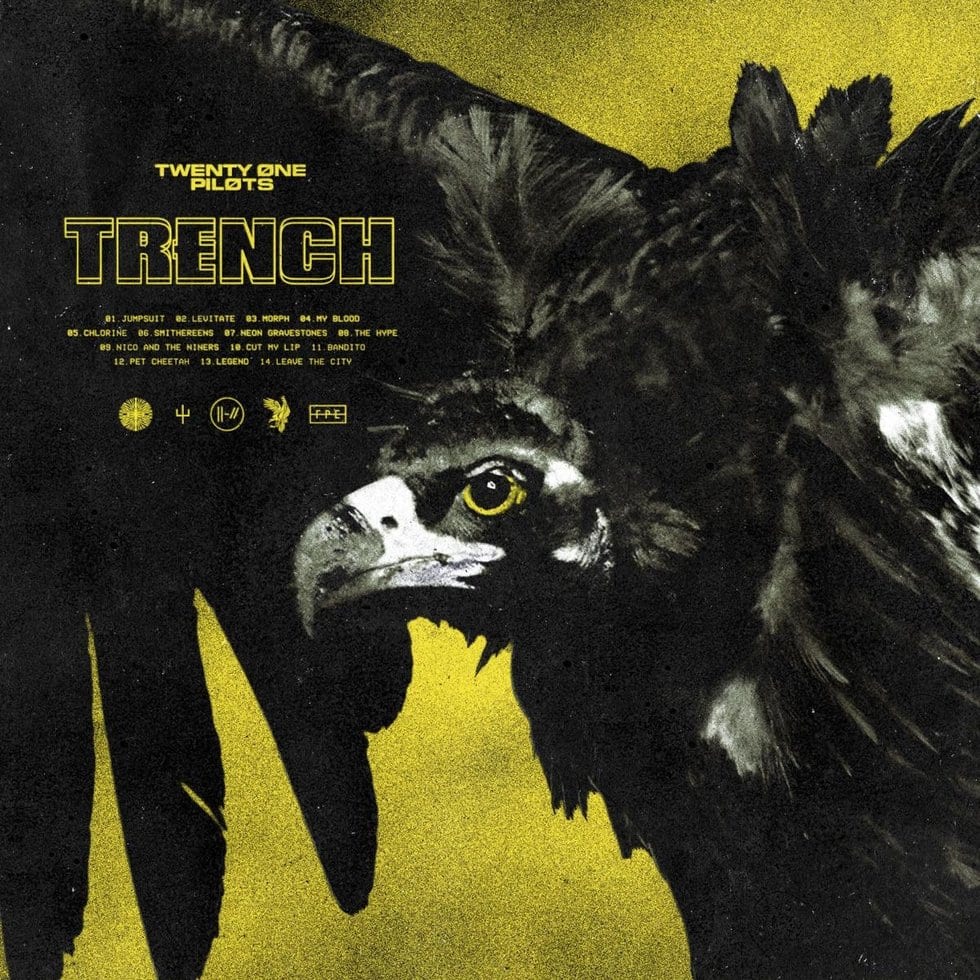 From early songs like “Addict With a Pen” to major label singles like “Guns For Hands” and surprise hit “Stressed Out”, Twenty One Pilots have slowly crafted a long-running meta-narrative about the tensions between musicians, songwriting, and audiences that hangs on every word.

One thing that ties the Clique and Tyler Joseph together is finding solace through creating and listening to music. The band ends every show with “We are Twenty One Pilots, and so are you” for that very reason. When bandmate Josh Dun said that Tyler couldn’t accept an award due to “severing ties with Dema”, fans speculated on what that meant, and a trove of answers waited for them.

Dema is the city where our protagonist Clancy resides, before fleeing from Nico & the nine bishops, who impose the religious cult of Vialism upon their citizens. Clancy joins a group who call themselves the Banditos, seeking to free the Demaian (Demish?) people. They make money selling razor blades. Also, Nicolas Bourbaki is the real name for the previous album’s manifestation of anxiety, known as Blurryface. Sounds confusing? It is. Add in more of those trademark meta-narratives, and the album sounds like it would be an impenetrable mess.

The album hangs together thanks to an increased maturity in the thematic content and production. Blurryface had several different producers, primarily likeminded genre-hoppers such as Ricky Reed (Meghan Trainor, Phantogram) and Mike Elizondo (Eminem, Regina Spektor). The latter producer’s go-to engineer Adam Hawkins returns to mix this project, but Tyler Joseph produces the record himself with Paul Meany from the alternative rock group Mutemath. The team of Joseph, Hawkins, Meany, and engineer Darrell Thorp make this album sound colossal, especially on opener “Jumpsuit”. “Jumpsuit” is Twenty One Pilots’ heaviest, even best song to date, and it’s almost disappointing that the rest of the record opts for slick atmosphere instead.

Restraint isn’t a bad fit for them. Possible future single “Morph” sounds like a Khalid song on its chorus, giving the titular line about “morphing to someone else” a double meaning and considering this group, that’s likely intentional. “Chlorine” has the catchiest chorus on the record paired with a trip-hop beat, yet where a past song would swerve into double-time, it concludes with a plaintive cry for help from the Banditos. And while “The Hype” musically alludes to “Wonderwall” and “Bittersweet Symphony”, the song works because of those associations – the group is excellent at pastiche, as this analysis of Blurryface breakthrough “Stressed Out” proves. Even the Wurlitzer-and-ukulele R&B cut “Legend” works about as well as a description like “Wurlitzer-and-ukulele R&B cut” can.

Sometimes, the band’s restraint leads to lesser versions of the kinds of music they normally do well. “Smithereens” is underwhelming compared to the previous album’s love song “Tear in My Heart”, their best pure pop single. “Tear” was simultaneously goofy and sincere, with the kind of uplifting chorus the band outright avoids on this record. “Smithereens” is still fine: Tyler brings back the meta-narrative again, singing “You know I had to do one on the record for her like this,” while boasting that he doesn’t care if he sounds like he’s “selling out” for his girl. Given the triumph of “Tear in My Heart”, hearing “Smithereens” strikeout is surprising.

The most compelling track here is the already controversial “Neon Gravestones”. It’s a total 180 from the affected edginess of their Suicide Squad song “Heathens”, instead calling out pop culture at large for not taking the mental health of ‘tortured musicians seriously. Where Vessel standout “Guns for Hands” combined harrowing imagery with a gorgeous chorus, “Neon” is more plainly introspective. Joseph so often writes his lyrics with the royal ‘we’, even at his darkest, making his frank talk about suicide all the more jarring: “I could use the streams and extra conversations / I could give up and boost up my reputation… promise me this / If I lose to myself / You won’t mourn a day / And you’ll move onto someone else.” Coming from an artist who’s been honest about his mental health from the very beginning, and in light of the suicides of Warner Music Group labelmates Chester Bennington and Scott Hutchison, it’s more difficult than ever to hear him this vulnerable.

The song is so sensitive that the last lines, about paying respects to grandparents “or someone of age”, feel too pat: “To life, they were dedicated / Now that should be celebrated.” While that may have helped Tyler, who placed his and Dun’s grandparents on the cover of Vessel, the ending feels too neatly resolved for an issue where there are no easy answers. He acknowledges that merely saying “we hear you” is not enough, but even as the intention is good and the song is overall stellar, the ending isn’t as thought-provoking.

Barring the writers-block anthem “Pet Cheetah”, featuring a rap about a cheetah named Jason Statham with a beat (“this beat I should delete”) that increasingly resembles a late ’90s anime dub, Monsters theme, there’s not a lot of room for the whimsy that defines the band’s public persona and live shows. The closest the album gets to something like “House of Gold” is “Legend”, a love letter to Tyler Joseph’s grandfather Robert, who passed away during the recording. Even this is tinged with sorrow, as Joseph is too busy with wrapping up the record to see his Alzheimer’s-stricken grandfather – “I’m sorry I did not visit / I did not know how to take it / When your eyes did not know me like I know you.”

As personal as that song is, the band remain just as emotionally resonant at their most universal. “Leave the City” returns to the motifs of advance single “Nico and the Niners”, but where that song gets lost in its own mythology and polish, this one goes in the other direction toward the most pop-punk sentiment imaginable — hating This Town. The song is not about yearning to leave; it’s about acceptance when leaving isn’t easy. Previous albums saw Joseph telling someone to “stay alive for me”, then screaming “don’t let me be gone”, but by Trench’s end, he – or maybe Clancy – merely aspires to “stay alive” at all.

That honesty is what got them to success in the first place; not through high-concept mischief or big-budget flourishes, but through their baseline humanity. It’s certainly present, especially on “Chlorine”, “Neon Gravestones”, and “Legend”, which are not coincidentally some of the best songs on the record. Perhaps the pulling back; pouring himself out on record and stage to thousands of fans for almost a decade has almost certainly taken its toll. They’re Twenty One Pilots. But so is he.