Heralded as an unconventional Americana string quartet based in Boston, the four versatile members of Twisted Pine have emerged from underneath the covers to reveal their love for the Beatles, Scissor Sisters, the Cranberries and, yes, disco-era Blondie.

The result is a charming, refreshing take on oldies but goodies by the figurative twisted sisters and brothers who all lend their voices to this band that includes lead vocalists Kathleen Parks (fiddle) and Rachel Sumner (guitar), mandolinist Dan Bui and bassist Chris Sartori.

As they prepare for the Friday (June 8) release of Dreams (via Signature Sounds), their EP of seven wildly innovative covers of songs including “Lucy in the Sky With Diamonds”, “I Don’t Feel Like Dancin'”, and the title cut, the fearless foursome present the music video premiere of Blondie’s “Heart of Glass” today (June 5) at PopMatters. 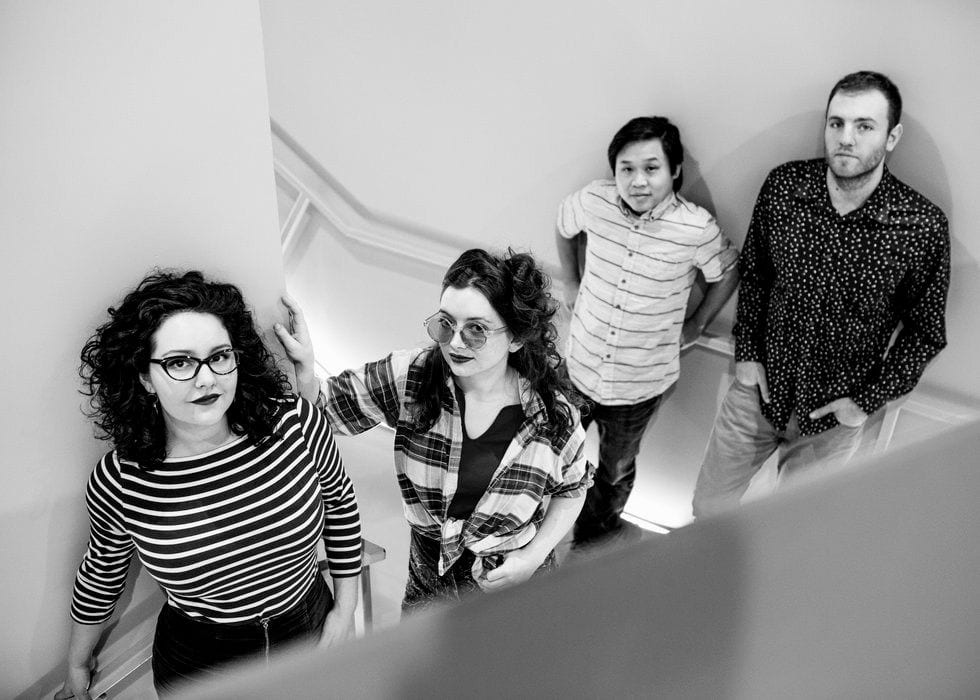 The song written by new wave wonder woman Debbie Harry and her musical partner Chris Stein launched Blondie and their third album, 1978’s Parallel Lines, into the pop culture stratosphere with her sexy vocals and the band’s propulsive disco beat.

Twisted Pine’s Parks elevates the new music video with breathy vocals, fiddlelicious fury and smooth dancehall moves during a spirited performance under the direction of her best friend, videographer Zoe Mitchell, who shot it during a sunny and breezy afternoon on the first day of May in an alleyway of Boston’s North End.

“Zoe and I have known each other for almost six years now; we met during our first semester at Berklee College of Music [in Boston] and have always connected in a very special and unique way that I’ve truly cherished,” Parks wrote in a series of email responses for this article that accompanies the premiere. “She is the water to my fire, and we make each other laugh — a lot.”

With Mitchell and Bui, the three put together the video concept that includes, Parks said, “The modern twist of showing the band on the road performing in different clubs and venues through a cellphone because isn’t that how we find out most information about each other anyway? We wanted to give a nod to the ’80s with the leather jacket, sunglasses, black and white alleyway footage and feel-good vibes while still sticking with the times.”

So to celebrate the 40th anniversary of Blondie’s Parallel Lines, and the impending release of Twisted Pine’s sweet Dreams, check out “Heart of Glass”, then continue reading to learn more about the cover, the video, the album and the band ahead of their tour through the Midwest and Northeast this summer.

“Since I was a kid, this song has made me want to dance whether it was in the car or rocking down the street with headphones,” Parks said when asked how she found her inner Debbie Harry to groove through the video. “I knew dance had to be a part of this because it’s part of disco culture. When I mentioned it to Zoe on the day of filming, she immediately agreed and encouraged me to really rock out. While we were filming, if ever she could tell I was feeling unsure or shy, she would call out ‘vogue!’ or ‘energy, energy!’ and I would burst into a smile. She made me feel awesome!”

Though the band members have connected through college, bluegrass and roots instruments, they brought jazz, funk, R&B, pop and British ballad sensibilities to the mix while exploring their musical identities. Parks, Sumner and Bui met at Berklee, while Sartori went to UMass-Amherst but studied jazz at Berklee.

The decision to next record and produce an EP of covers, including a respectfully rip-roaring rendition of Joni Mitchell’s “Raised on Robbery” and the fitting finale of “Dreams”, sounding more poignant following the January death of Cranberries lead singer Dolores O’Riordan, was an easy one, according to Parks.

“We first started learning and playing these songs because our renditions and mashups came very naturally to us,” she said. “For example, ‘El Chepe/The One I Love Is Gone’, came out while making a set list for a bluegrass gig. Vulfpeck’s ‘El Chepe’ had just come out, and Chris was laying it down on the bass; Rachel was writing out a set list asking us if we wanted to play ‘The One I Love Is Gone’ (Bill Monroe’s minor waltz), and all of a sudden the vocal phrasing just came out of me, like a moment in a musical. Others such as ‘I Don’t Feel Like Dancin’ ‘ came from our love of disco bass lines, Scissor Sisters, and Elton John. We wanted to get those grooves in our hands. Rachel absolutely slays the vocal — turning it into a honky-tonk, contemporary affair.”

For a band that triumphantly covers a lot of ground in a short period, Twisted Pine surely knows these reboots are made for walking on sunshine. 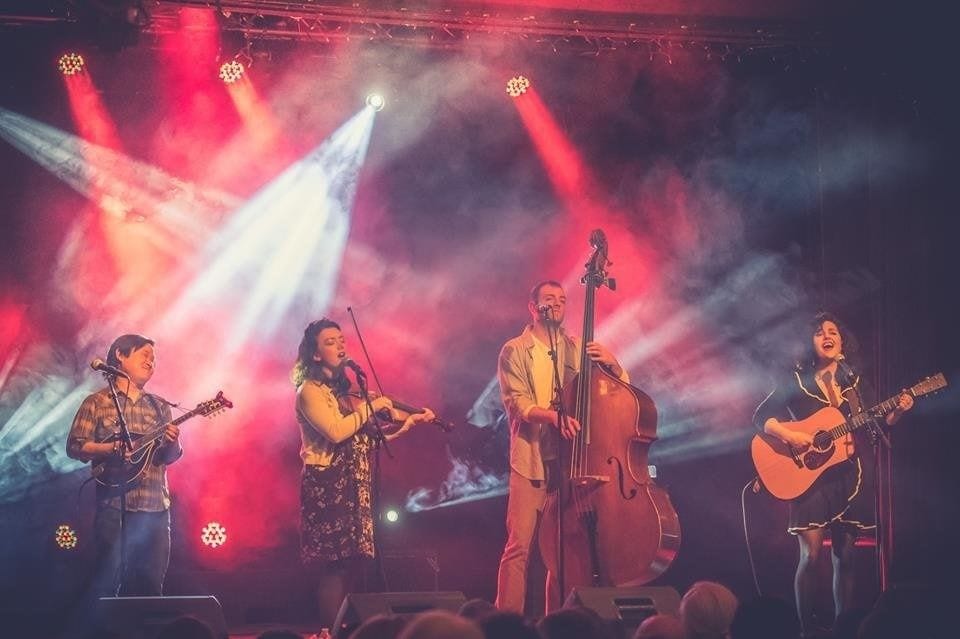 There’s no extra credit, but Kathleen Parks, the fiddler who shares lead vocals with Rachel Sumner, also agreed to fill in the blanks of her life and answer a few more questions. Get to know the musician who was 18 when she moved to Boston to study violin performance and songwriting at Berklee College of Music before graduating last spring.

Family members: “My father Eric played the trumpet and was the leader of West Point Military’s Jazz Knights and the Grammy-award winning Jimmy Sturr Orchestra for about 30 years. My mother was a dancer and took me to violin and dance lessons. She drove many late nights and long distances to get me and my brother Conor back and forth from Irish step-dancing lessons when were teens. My brother played upright bass in high school and likes to burst into a wedding reception with his Justin Timberlake dance moves. He and I share that in common. He and my sister-in-law Jodi practice medicine in Long Island.”

Status: “I’m currently in a very happy and loving relationship. Living in Salem, Massachusetts, and loving Witch City. Everybody in this town is funky, and it’s so easy to get to the beach. Currently, don’t have any tattoos or piercings; if I get them, I’m going to wait until I’m old and all my skin sags so that the image doesn’t droop from years of aging.”

Hobbies: “Some of my best songs have come to me when I’ve been away from my instrument doing chores of some kind, or while taking a walk. I’m a big fan of Jazzercise, exclaiming ‘We’re gonna boogie down!’ in a man voice, and squishing cats, dogs and people big or small.”

Kathleen Parks: “That’s so tough to answer! I guess I would have to say ‘El Chepe/The One I Love Is Gone’ because the way we play it live is different every time. Recently, Chris has been opening the song with a super free-improvised bass solo where sometimes he’ll be playing in a different key or time signature and make it land into the song’s groove perfectly. It leaves goosebumps on my arms. Other reasons to love the song is the weaving in and out of melody and harmony singing with Rachel, and space jamming with Dan. The freedom we give this song has extended into all of the other covers we perform live. We really try to keep the music fresh in any way we can. You have to be on your toes the whole time, and that’s what’s so much fun about playing in this band.”

2. Have you heard from Debbie Harry or anyone else from Blondie regarding your cover or music video for “Heart of Glass”?

Parks: “Not yet! I know Debbie and the band are on tour right now. It would be a dream come true if we ever heard from any of them, maybe after June 8th!”

3. Who’s the biggest disco fan of the group, and why?

Parks: “Hmmmmmmm, that’s probably a competition between Chris and I. I’m known to bust out the disco in the van and play the Bee Gees, Pointer Sisters or a disco-fever playlist. Meanwhile, Chris can just bust out the bass and play you some Jamiroquai, he’s so good!”

4. Who’s the biggest disco hater of the group, and why?

Parks: “Aw man, we actually all love it. As soon as someone puts it on, we’re all bobbing our heads.”

5. Who’s the party animal of the group and what led to that distinction?

Parks: “Dan! We call him Fireball Bui for more than just his fast mandolin licks.”

6. Assuming you had other possible choices, which cover was the most painful to leave off the EP?

Parks: “We ended up getting all the covers we wanted onto the EP, including the Cranberries’ ‘Dreams,’ which we recorded two months after the original six. Now, we sometimes do a nice rendition of [Bob] Dylan’s ‘Simple Twist of Fate,’ which Rachel really shines on.”

7. Since your EP is titled Dreams, what recurring dream do you have about Twisted Pine’s future?

Parks: “We really want to keep growing and writing. Take our sound as far as we possibly can, and continue to use our influences to keep inspiring us along the way. A dream of ours is to play NPR’s Tiny Desk Concert; that would be so great for us.”